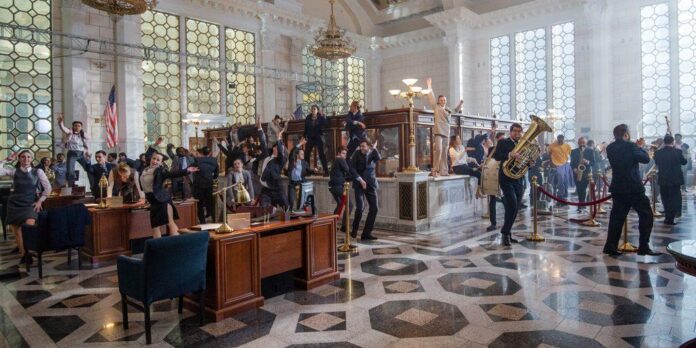 Park Avenue Armory has housed many masterpieces and (not related to the drug-fueled HBO hit) is one of them. The feature-length film by artist Julian Rosefeldt, which opened November 2022, is a cinematic feat confronting global consumerism, class, privilege, and the failures of contemporary society.

The work encompasses five theatrical vignettes, the first featuring actor Giancarlo Esposito (who many will recognize from ) as a cabdriver waxing poetic to a mostly non-responsive passenger on their way to the Brooklyn Navy Yard. While the scenes that follow feel very “New York,” they also encapsulate a world that merges parts of the city with fantasy in the vein of Terry Gilliam’s . 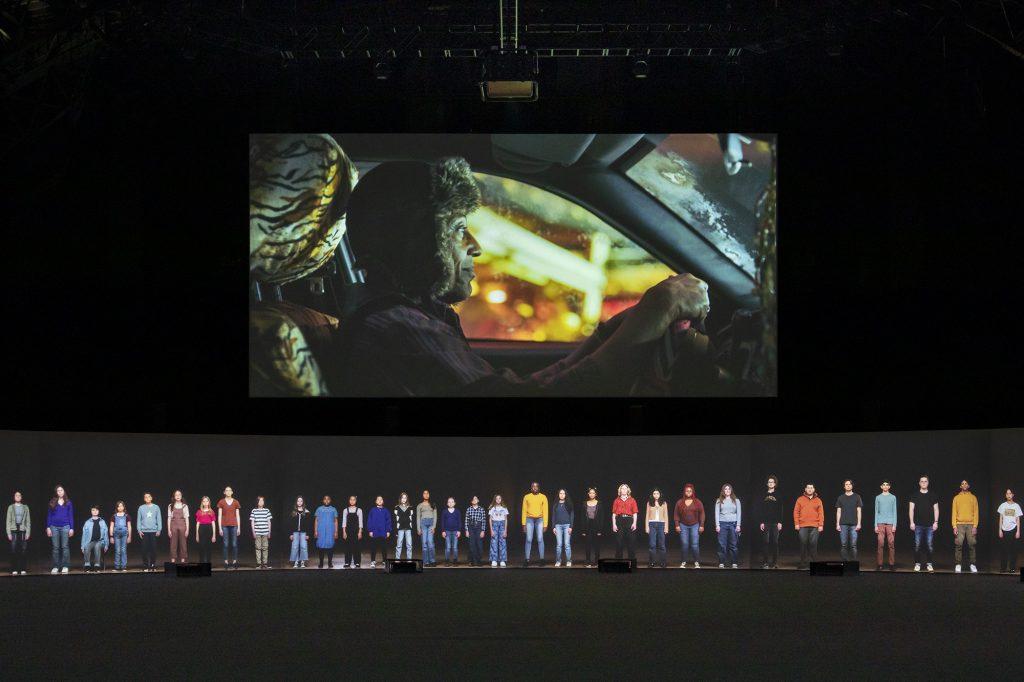 Shown on 24 screens in the round, the installation has three components: the feature film, a 360-degree perspective of the Brooklyn Youth Chorus shown to scale and in “real time,” and five additional screens, each containing a drummer. The drummers accompany the Brooklyn Youth Chorus whose voices fill the hall in harmony with music composed by Samy Moussa. The result is as jarring as it is soothing.

Looping throughout the duration of the exhibition, is a commentary on the institution and neighborhood where it is housed, not stated but implied as the topic of wealth and class run throughout. The film is an enigma of sorts, a high-budget utilizing Shakespearean-style soliloquies and didactics. At one point, as Esposito’s passenger (also played by Esposito himself) walks away from the cab, he murmurs, “Remember: We are but dust and shadow,” quoting Roman poet Horace. 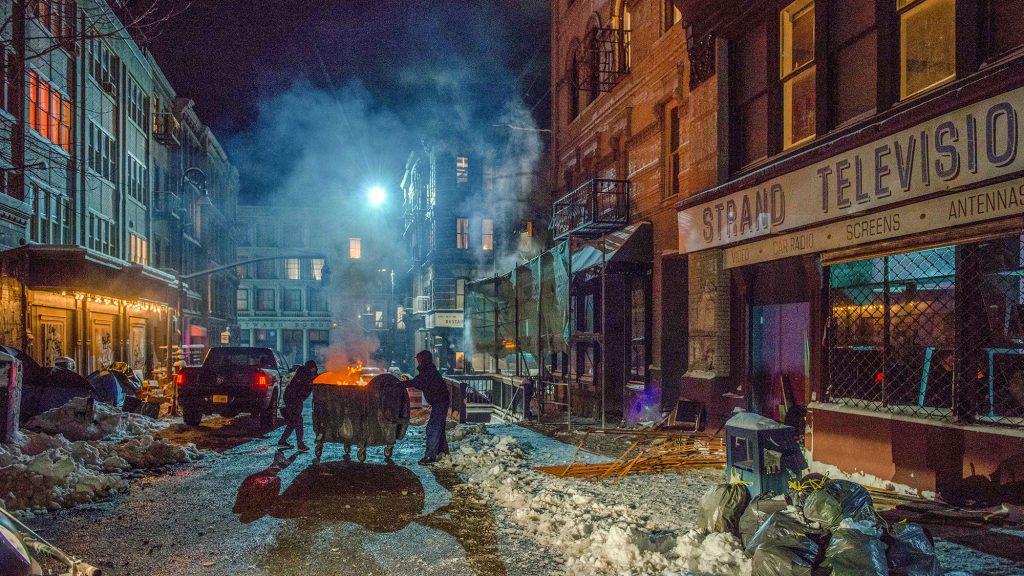 Rosefeldt is the mastermind behind the screenplay, but is quick to not take credit.

“The credit for the writing doesn’t go to me, but to the more than 100 writers that contributed texts which were assembled into the text collages in ,” he said. “Creating a project on a topic as general as greed or capitalism is obviously ambitious, if not presumptuous, and the sheer amount of sources to be considered and books to be read was a bottomless pit.”

The chosen texts come from such notables as Ayn Rand, Plato, Aldous Huxley, Jean-Paul Sartre, Barack Obama, the Rolling Stones (from the band’s “You Can’t Always Get What You Want”), and even Snoop Dogg (from “Gin and Juice”). All of these texts are expertly woven together in correlation with cinematography to create something entirely new.

The result is uncanny, as certain phrases are recognizable but completely removed from any familiar context. Rosefeldt works within his own container, inventing a world untethered to time or self-consciousness. 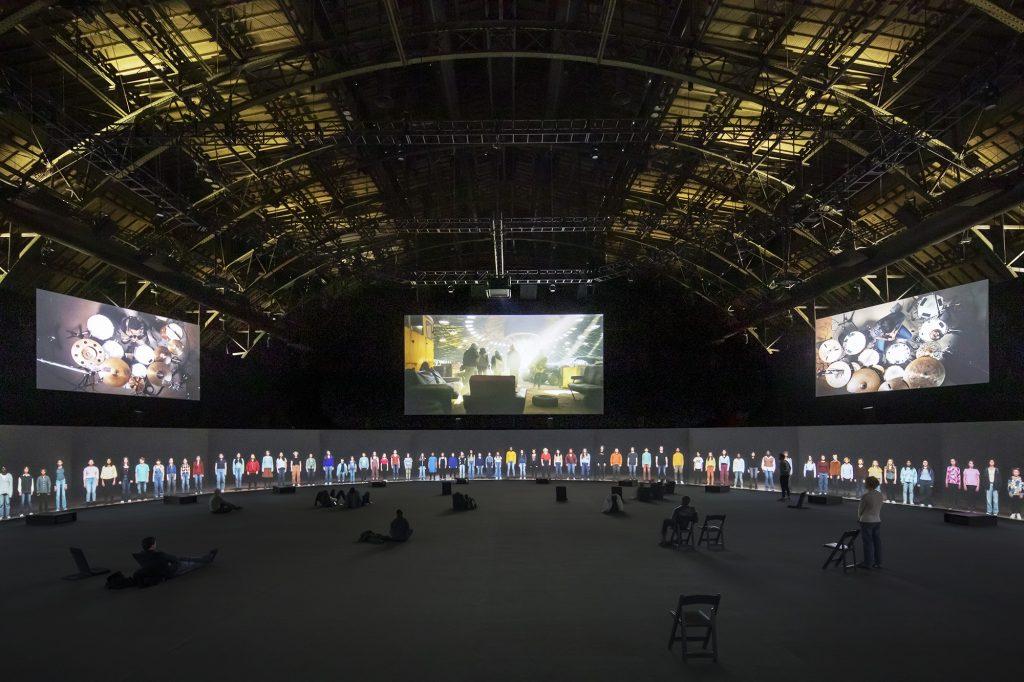 “What helped structuring the text fragments once they were selected was that they needed to be speakable and performable in a convincing manner following a stream-of-thought,” added Rosefeldt, “which makes the viewer forget that these texts originate in various epochs within 2,000 years of cultural history.”

echoes the desperation felt by Willy Loman from Arthur Miller’s , the seamless visual weaving of (2010) by Christian Marclay, and a series of live performances at Matthew Barney’s studio several years ago.

Rosefeldt made a splash in 2015 when his video installation, , starring Cate Blanchett, was screened at Park Avenue Armory (it has since been adapted into a feature film). On the two works, he added, “Comparable to the characters in , the actors in are more like vessels for universal ideas than real-shaped characters.”

‘It’s a Huge Message to the Centuries-Old Art Market’: 18-Year-Old NFT Star Diana Sinclair on How She’s Taking on the Blue-Chip Art World

7 Questions for the Miaz Brothers, Whose Forthcoming Show Champions Hope in the Face of Crisis