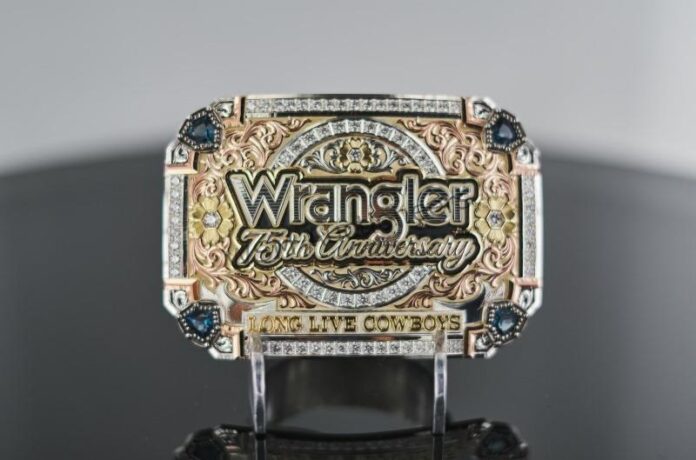 Wrangler is closing out its 75th anniversary this year with a little extra sparkle to match your spurs. The workwear brand is auctioning a commemorative 6.34-karat belt buckle featuring “75 diamonds for 75 years” with Western Sales Management through December 30.

Montana Silversmiths handcrafted the memento, valued at $40,000, just for the occasion. Bidding opened in November at $7,500, and has since surpassed $17,500. All proceeds will be split between the Western Sports Foundation and Lead Changes, “two independent non-profit organizations dedicated to preserving and promoting the western way of life,” Wrangler stated. That’s at least two good reasons to “let your yearnin’ get ahead of your earnin’,” as they say.

“Wrangler has drawn inspiration from the code of the west since its inception in 1947,” Vice President Allen Montgomery has stated. “We couldn’t be more excited to honor our roots by working to preserve the culture and heritage of the great American cowboy.” Additional anniversary activations include the brand’s Pendleton collaboration, new pieces in their apparel collection with the T.V. show , and the Wrangler National Finals Rodeo, which concluded in Las Vegas on December 10. 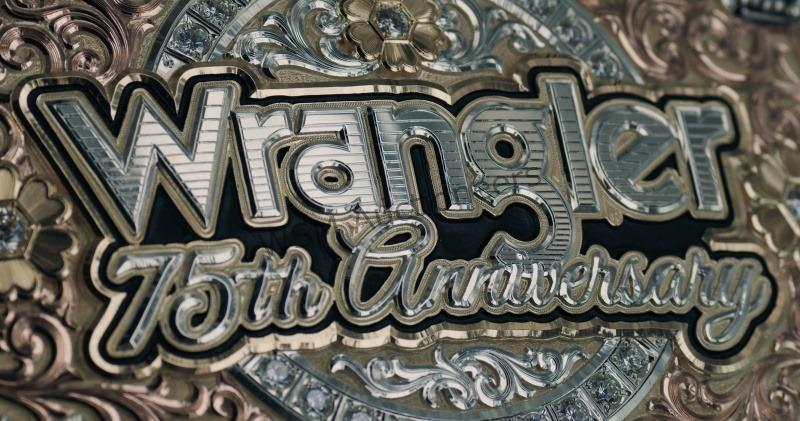 The buckle, however, is a spectacle of its own, currently on a cross-country tour to meet brand ambassadors like pro bull rider JB Mauney and musician Leon Bridges, whose reactions to the keepsake’s brilliant cut diamonds, denim blue topaz, 14-karat yellow gold accents, and 14-karat red gold filigree will be immortalized in the company’s “Hands of Wrangler” photo series.

“This isn’t just about legacy, it’s about investing in the next generation of cowboys and cowgirls,” Wrangler wrote on its western news network. Western Sports Foundation trains rodeo athletes in life skills like financial management and mental health. Lead Changes harnesses horsemanship to teach young people leadership, confidence, and integrity.

The proverbial American cowboy peaked in the late 19th century, before railways mechanized cattle transport. Earlier this year, Leman Walls of the Working Ranch Cowboys Association estimated there are currently only 600,000 American cowpeople—one third of which are women, according to the USDA, per the Washington Post. Cattle driving is grueling work, not always as cinematic as it’s made out to be. Most professionals make under $30,000 annually.

“There are still people that work cattle atop horseback, but like contemporary western hats, cowboy culture now—here in the U.S.—is mostly symbolic and romanticized,” Santa Fe-based artist Clayton Porter, who’s worked on Bruce Nauman’s ranch, told Artnet News. “It shouldn’t be dismissed that the occupation was in concert with the colonization and displacement of Indigenous people,” Porter said. He considers Patagonia’s contemporary gauchos closer to their roots.

Still, the artist noted a general concept of grit and determination attributed to cowboy culture could last into contemporaneity. And what better way to promote those values than with diamonds—the hardest known natural material on the planet?