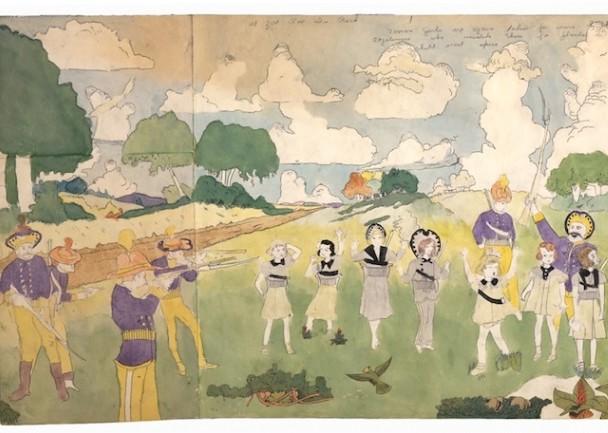 A legal battle over the valuable estate of Outsider art star Henry Darger looks to be heating up in Chicago, and the stakes are high.

In recent years, a group of about 50 distant family members, led by a single relative of the artist, have stepped forward to say that they are the rightful heirs of Darger’s estate and should have control of both the considerable body of artwork he left behind, as well as the related copyrights. They have waged a legal fight against the artist’s former Chicago landlords, Kiyoko Lerner and her late husband, Nathan. In 1960, the couple purchased the building Darger had lived in for decades, beginning around 1930, and where he created his secret collection of fantastical drawings and collages, depicting an epic rebellion led by children.

The Lerners contend that Darger left behind all his art and materials to them when he vacated his apartment for a nursing home in 1972, roughly a year before his death. In the ensuing decades the Lerners played a major role in Darger’s posthumous art world discovery, celebration, and market rise.

However, now, the lead plaintiff in seeking control of the estate, Christen Sadowski, appears to have scored a win. In early June, the probate division of a Chicago court agreed to make Sadowski “the supervised administrators of the estate,” in response to a request filed earlier this year. In that role, Sadowski is “authorized to take possession of and collect the assets of the Estate, including its copyright and personal property interests,” according to court papers.

Following this decision, the Sadowski and the Estate of Henry Joseph Darger filed a new legal action against Kiyoko Lerner, as well as the related Lerner foundation, on July 27 in US District Court for the Northeastern District of Illinois.

The lawsuit alleges a laundry list of wrongdoing including: illicit copying, public exhibition, distribution, and commercial exploitation of Darger’s unpublished and copyrighted artwork, deceptive trade practices, unfair competition, and inappropriately trademarking certain works, among “other violations of federal and state law.” It also accuses Kiyoko Lerner of “anticybersquatting,” due to the registration of “officialhenrydarger.com.”

Sadowski’s attorney did not immediately respond to request for comment. 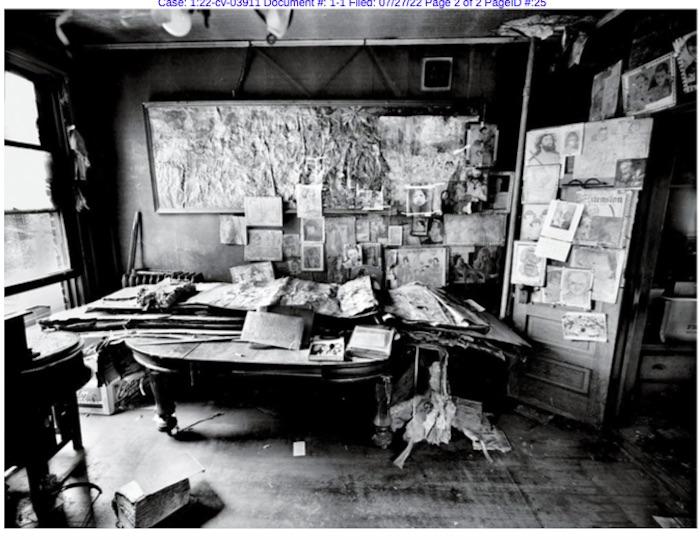 Darger’s former apartment in the Lincoln Park neighborhood of Chicago. Image via Pacer.

In a previous court filing, Kiyoko said that in the years during which Darger was a tenant, she and Nathan would often check in on the reclusive artist, “making sure that he had food or living arrangements that suited his physical limitations,” according to court papers.

According to Kalnins, “Kiyoko Lerner had every right to take her previous actions concerning the artwork. Kiyoko has done an amazing job over the past 49 years making an unknown outside artist’s artwork known throughout the world.”

During his lifetime, and unbeknownst to anyone, Darger authored several books and made hundreds of collages and drawings. In an affidavit, Kiyoko said that Darger gave all his belongings to Nathan one year before he died, and that Nathan subsequently gave them to Kiyoko.

Lerner said in previous court filings that it was through her and Nathan’s efforts that Darger’s work gained international recognition. It is now part of permanent museum collections in Chicago, New York, Paris, and Switzerland. The artist’s current auction record, set at Christie’s Paris in 2014, is $745,000 (€601,500), for a large, double-sided watercolor (1940-1960). According to the Artnet Price Database, a total of 33 Darger works have been offered at auction. Three were unsold, and the lowest price recorded was $10,350 for a 1960 pencil and watercolor on paper sold at Sotheby’s in 1994.

The Sadowski-led heirs were described by the in one report as first cousins two or three times removed. In the latest lawsuit, Sadowski and the Darger estate have doubled down on many of the claims initially presented in the February letter to the probate court seeking authority over the estate.

According to the new lawsuit, the Lerners’ “claim of ownership interest in the Darger Works or any alleged transfer of the associated copyrights in the Darger Works are invalid.” The heirs further claim that a transfer of copyright ownership “is not valid unless an instrument of conveyance, or a note or memorandum of the transfer is in writing and signed by the owner of the rights conveyed or such owner’s duly authorized agent.”