Home News Here Are 5 Rising Polish Artists You Should Know From Warsaw Gallery... 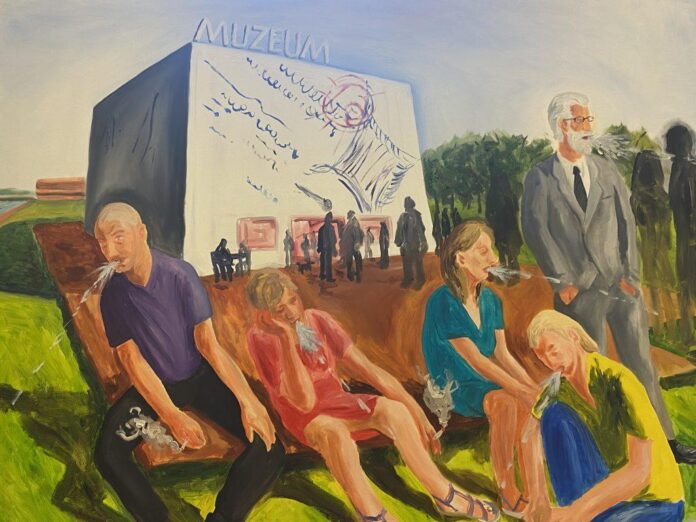 Dealers, collectors, and art enthusiasts gathered in Poland last weekend for Warsaw Gallery Weekend which kicked off on September 29, an annual celebration of contemporary art organized by the city’s galleries. For its 11th edition, 33 galleries participated with 38 exhibitions in their gallery spaces and at offsite venues beyond. At the infamous Palace of Culture and Science, Raster Gallery presented the work of Oskar Dawicki and Gunia Nowik presented the work of Nicolas Grospierre in the Pniewski Villa, a modernist architectural gem. At Kino Iluzjon, a 1950s cinema, Hos Gallery and Propaganda Gallery collaborated on an exhibition of sculptor Norbert Delman.

While the right-wing Law and Justice party continues to wreak havoc on the country’s esteemed contemporary art institutions—most recently ousting the longtime director of Muzeum Sztuki in Łódź following similar actions at Warsaw’s Zacheta Gallery and the Ujazdowski Castle Center for Contemporary Art in Warsaw—the capital’s private cultural sector is rapidly growing. Artists and curators are finding refuge in commercial galleries where they can present work without fear of censorship. Given this, it is unsurprising that many of the subjects that appeared throughout this year’s weekend were precisely those which the conservative government has been trying to quell, including women’s rights, LGBTQ+ issues, and how history is manipulated by those in power.

As Russia’s invasion of Ukraine escalates on the heels of Putin’s annexation of four Ukrainian provinces, it was hard not to notice the recurring references to central eastern Europe’s bloody and complicated past. Some galleries provided additional pamphlets translated into Ukrainian, acknowledging the millions of Ukrainian refugees who have settled in Poland since the start of the war earlier this year. In many ways, the gallery weekend felt like a safe haven from the current geopolitical reality of the region: a four-day celebration of the creativity and dialogue that can be generated in inclusive spaces. It also served as a reminder of all that may be lost if the right-wing government continues to chip away at Poland’s art and culture scene amid a chaotic political situation in Europe.

Below are five artists with stand-out exhibitions that resonated with the cultural moment.

On view at Olszewski Gallery through October 28 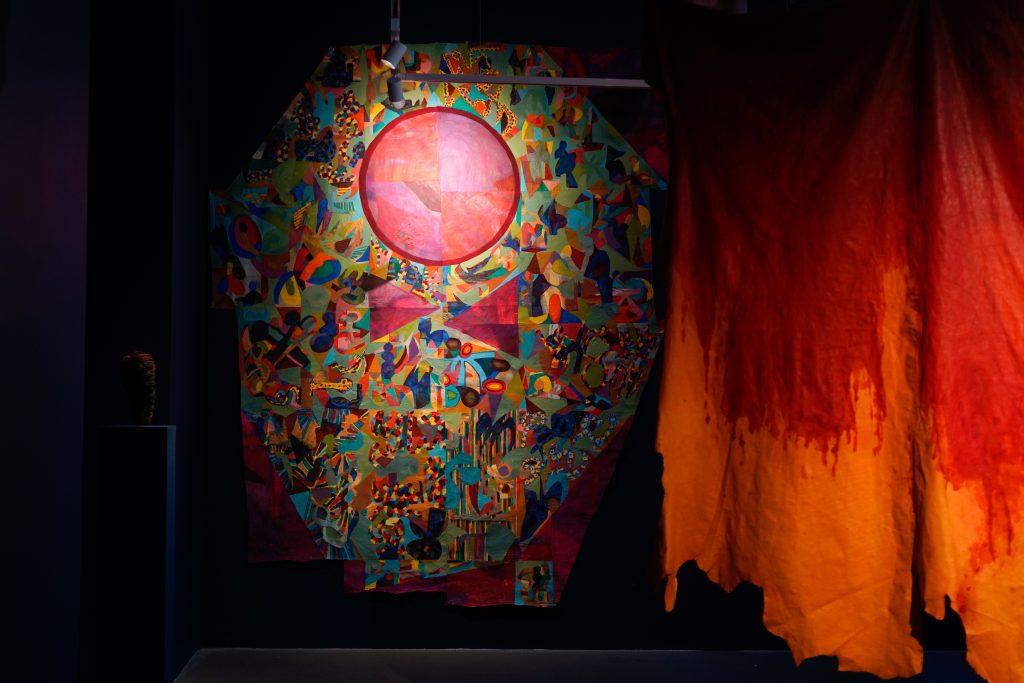 Błażej Rusin creates kaleidoscopic frescos on the walls of abandoned buildings throughout East-Central Europe. Influenced by his origins in the eastern Poland as well the history of the many displaced peoples of this historically multiethnic region, Rusin carefully removes his works—sometimes with bits of plaster—and displays them as mobile wall hangings. At Olszewski Gallery, Rusin’s works are presented alongside the work of 90-year-old artist Wojciech Sadley, an important figure in the Polish School of Textiles from the same region who also painted on easily transportable materials including cloth and parchment. Ranging from €5,000 to €6,000 ($5,000 to $6,000), Rusin’s monumental works, which he describes as “post-graffiti,” are exuberant celebrations of pattern, shape, and color that nod to the medley of cultural influences and diversity of the eastern borderland region of Poland.

On view at Jednostka Gallery through October 22 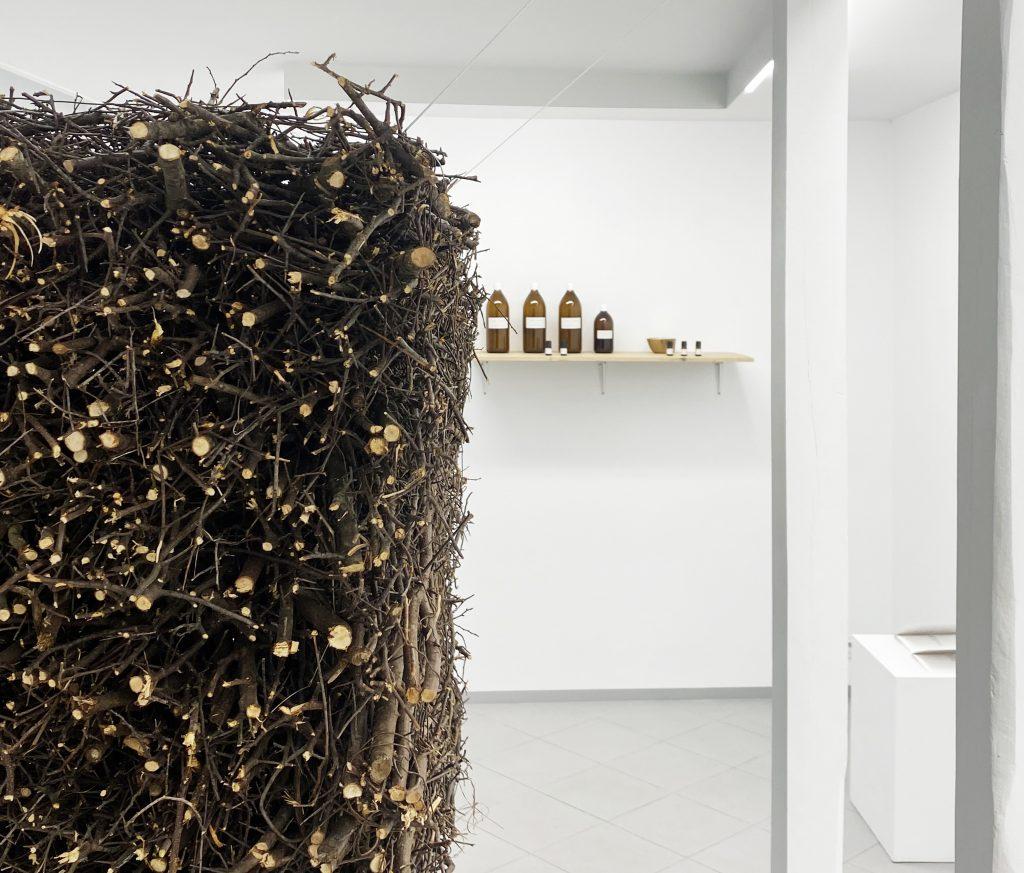 Walking into Jednostka Gallery, the visitor is immediately struck by the smell of pine emanating from of a bundle of sticks suspended in the center of the small gallery. The installation is the work of Karolina Grzywnowicz, who in recent years has focused her research-based practice on how landscaping is used as a tool of ideology and power. In the installation (€12,500 ($12,500)) and collages (€1500—€3000 ($1,500—$3,000)) on view at Jednostka Gallery, Grzywnowicz focuses on the use of two different pine trees: the Scots pine (pinus sylvestris) which was used by Nazi Germans to camouflage the crematoria and gas chambers at Auschwitz and Birkenau, and the Jerusalem pine (pinus halepensis) planted by Zionists in Palestine to make the landscape resemble that of East-Central Europe. Grzywnowicz’s exhibition was awarded one of two prizes given during Warsaw Gallery Weekend by the ING Polish Art Foundation, selected by an international jury of six art professionals.

On view at BWA Warszawa through November 26 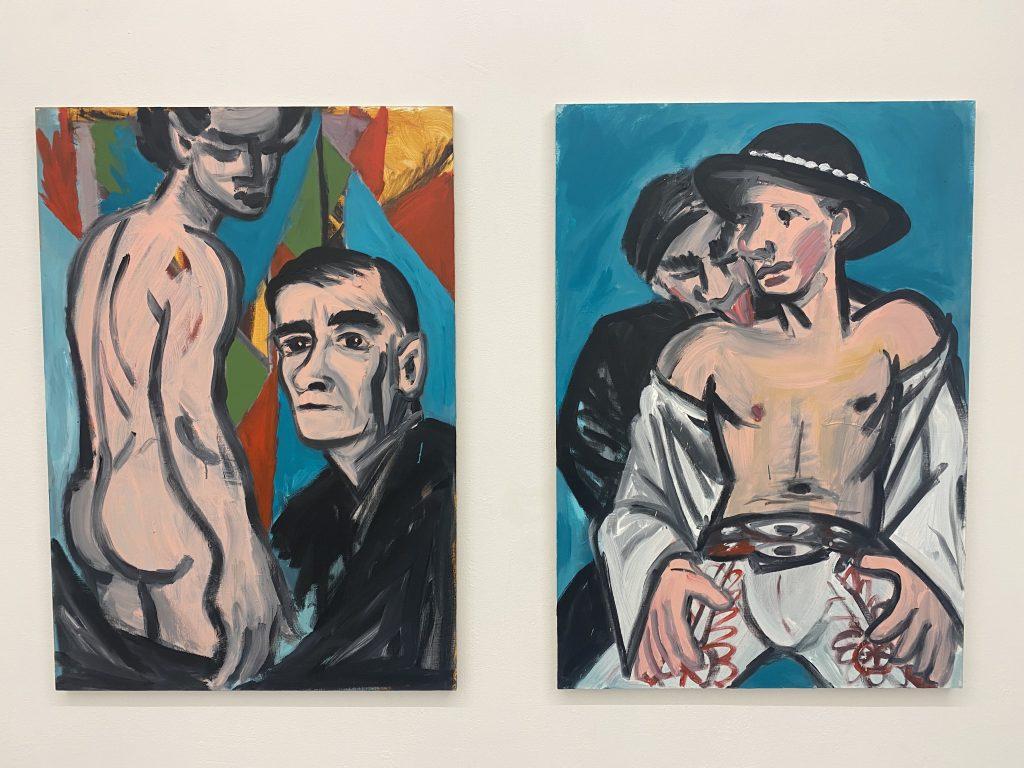 With his newest body of work, Karol Radziszewki (born 1980) continues his mission of highlighting just how many historic Polish cultural figures were non-heteronormative, a fact that is ignored and, at times, even erased by the right-wing government and conservative portions of the Polish population. In this series on view at BWA, Radziszewski focuses on the composer Karol Szymanowski, considering the musician’s lovers and characters from his operas and ballets. The paintings, which range in price from €1,800 to €10,000 ($1,800 to $10,000), were almost all sold out on the third day of the gallery weekend.

Radziszewski, whose ongoing research project The Queer Archives Institute documents the queer history of East-Central Europe, will be featured in the upcoming exhibition “To Be Seen: Queer Lives 1900-1950” at the Munich Documentation Centre for the History of National Socialism in Munich, Germany, which opens this week. His exhibition at BWA Warszawa was awarded the second prize given by the ING Polish Art Foundation.

On view at Polana Institute through October 8 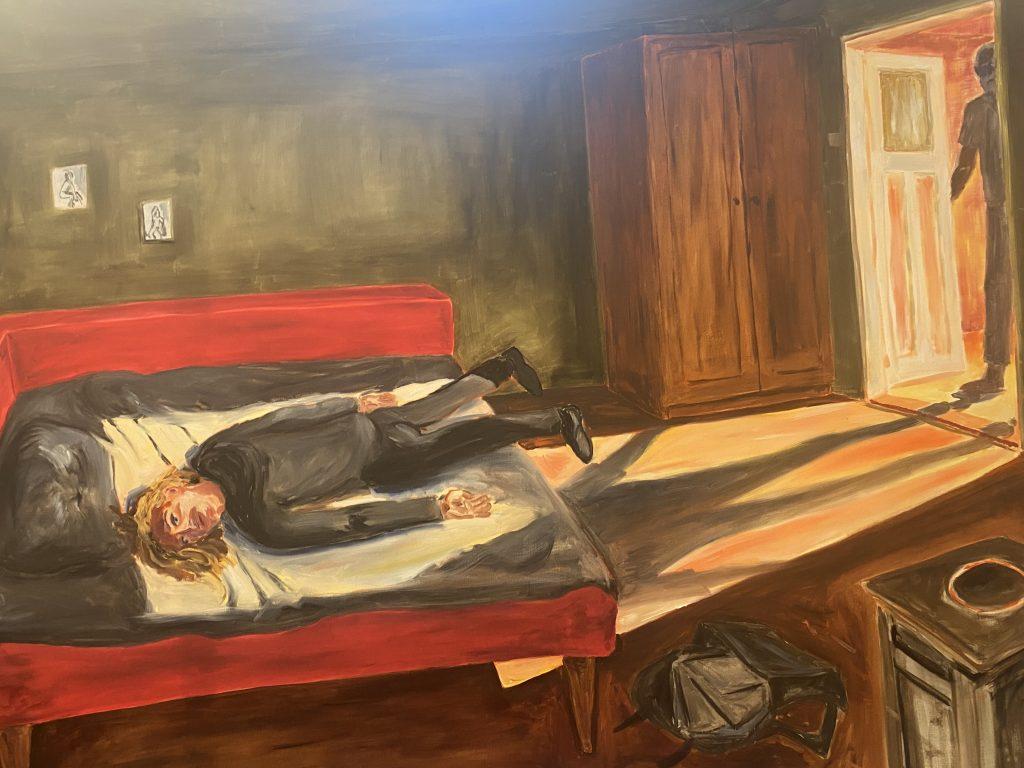 The autobiographical paintings of Patryk Różycki are striking in their intimacy, tackling uncomfortable subjects from his childhood including the difficulty of becoming close to his father and the inability of his family to openly grieve together following the death of his siblings. Różycki, who comes from a rural working class background, at times also addresses what can be seen as the elephant in the room of an otherwise inclusionary art weekend: how the Polish art world can be far from welcoming to those from outside of its cosmopolitan centers. Accompanying the exhibition is a diary of sorts, offering Różycki’s very personal reflections on each of the scenes he depicts in his paintings, which range from €1,800 to €4,400 ($1,800 to $4,400).

On view at lokal_30 through December 2 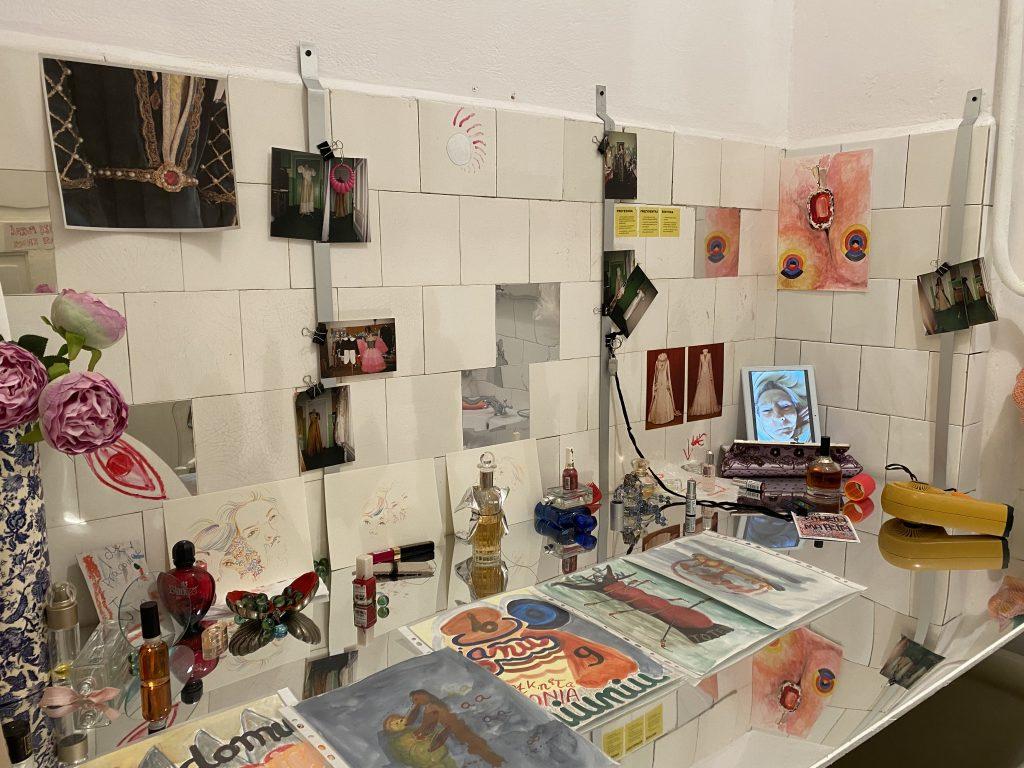 Elka Krajewska at lokal_30. Courtesy the gallery and the artists. Photo: lokal_30.

Over the past two decades, Elka Krajewska collaborated on various art projects with her late mother Maria (who goes by the artistic name KrajM) during the latter’s struggle with the effects of Alzheimer’s Disease. Grappling with the loss of her mother’s ability to speak, Krajewska searched for new methods to communicate with her—together, they found a creative collaboration.

The exhibition features drawings and installations the two completed together as well as Dromoi Pros Matria, a new documentary video-collage featuring various snippets from the lives of both artists, including scenes in which they are creating some of the works on view at lokal_30. The exhibition is at times unsettling in its exposure of moments that are usually kept private, and raises the question of what can be gained through pulling the curtain far back on the process of losing loved ones.