Home News Here Is Every Artwork Attacked by Climate Activists This Year, From the... 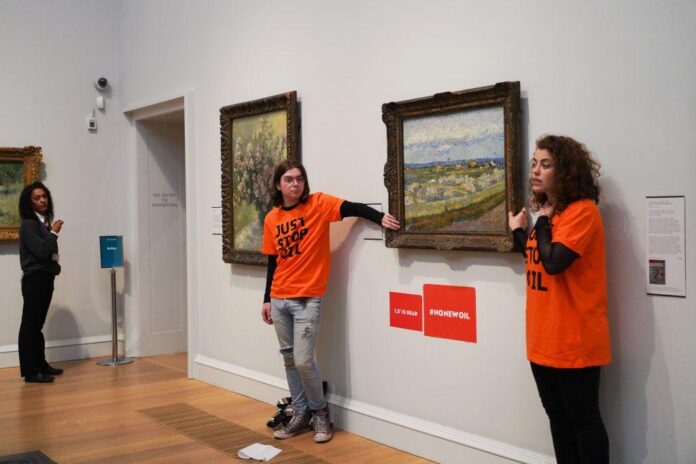 Climate activists turned up the heat this year, decrying the global environmental crisis by targeting internationally renowned art museums’ greatest treasures—and leading many onlookers to wonder how their actions actually connect with the greater good. Just last week, protesters from Just Stop Oil glued themselves to Vermeer’s iconic in the latest of their ongoing art demonstrations, previously focused on the U.K.

The same group blasted a Rolex store in London with orange paint less than 24 hours later. In response to the mounting wave, France’s culture minister called on the country’s museums last week to “redouble their vigilance.” Guards at the Musée d’Orsay in Paris subsequently stopped a Just Stop Oil protestor from gluing and souping van Gogh’s Self-portrait in Saint Remy this weekend, as soon as the protester removed her sweater to reveal Just Stop Oil’s signature white shirt beneath.

But Just Stop Oil isn’t acting in isolation. Their antics have been joined with demonstrations by Extinction Rebellion, Germany’s Letzte Generation, and Italy’s Ultima Generazione. (Although the last two groups’ names both mean “The Last Generation,” they’re apparently of no relation.) And some of these activists have received financial support from the likes of oil heiress Aileen Getty.

Gluing has proven, well, a reliable connection among these disparate activists’ public disruptions. Sometimes foods like tomato soup, mashed potatoes, and cake appear. Another common thread seems to be that activists are training their ire on historical rather than contemporary work. Just Stop Oil seems to favor pastoral paintings, while Ultima Generazione has targeted sculptures by Italian artists Botticelli and Boccioni.

Museum staff aren’t even the most outraged respondents. Normally, museum visitors verbally attack activists during their action. Louis McKechnie, one of two protestors who demonstrated on Van Gogh’s separately affixed himself to a soccer goalpost this year—and was assaulted by a sports fan. In July, Artnews spoke with Extinction Rebellion’s Simon Bramwell, who said employees at the Royal Academy understood their motives. Security guards joined them in singing, “There Ain’t No Mountain High Enough.”

After all, activists reason, what’s will the value of art be in the future if you can’t even eat?

Staging a spectacle before a famous artwork won’t reanimate wiped out animal species or force water levels to recede, but it might shake audiences free from our status quo. Some outlets liken these activists’ approach to The Situationists’ adage, “Sous les pavés, la plage!” (“Beneath the pavement, a beach”). Under entrenched rhythms lies the possibility for novel utopias.

Now that their collective modus operandi is becoming predictable, it’s also becoming its own kind of pavement. Here’s all the hottest climate protest art incidents from 2022 alone, before we all get too used to glue and force them to do something new.

Two men in Just Stop Oil shirts approached Vermeer’s at the Mauritshuis museum in The Hague. One started gluing his shaved head to the work’s protected surface. “How do you feel when you see something beautiful and priceless apparently being destroyed before your eyes?” the other asked, after dumping tomato soup over his partner’s head. Onlookers chastised the pair, shouting “Shame on you” and more. “Where is that feeling when you see the planet being destroyed?” the vocal protester pressed. Both men were arrested. Officials at the Hague have said the painting is safe, and they’re considering further safety measures. 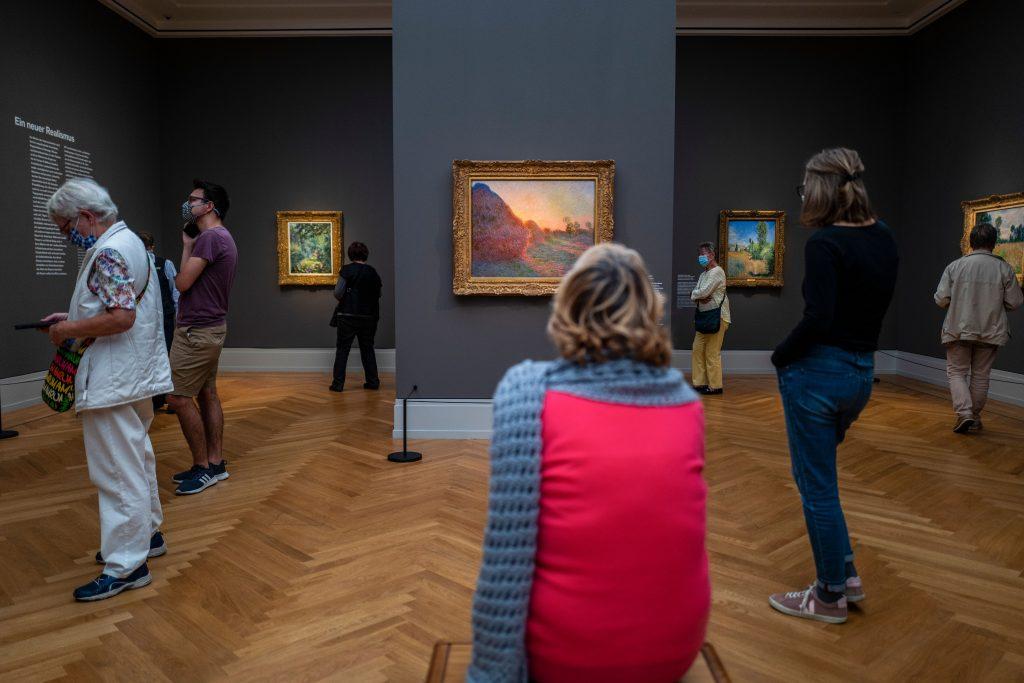 Monet’s (1890) on display at the Barberini museum in Potsdam on September 24, 2020. Photo: John MaDougall/AFP via Getty Images)

Two Letzte Generation activists acted fast at the Barberini in Potsdam, Germany, each throwing their own buckets of yellow goo later identified as mashed potatoes on Monet’s The room fell silent as each glued a hand to the wall around the work and began a speech about the climate crisis. When protestor Mirjam Herrmann began talking, onlookers started expressing their disdain. She spoke over them as museum officials converged on the scene. Both protesters were taken to jail. The artwork was not damaged. The museum was closed for a week after. 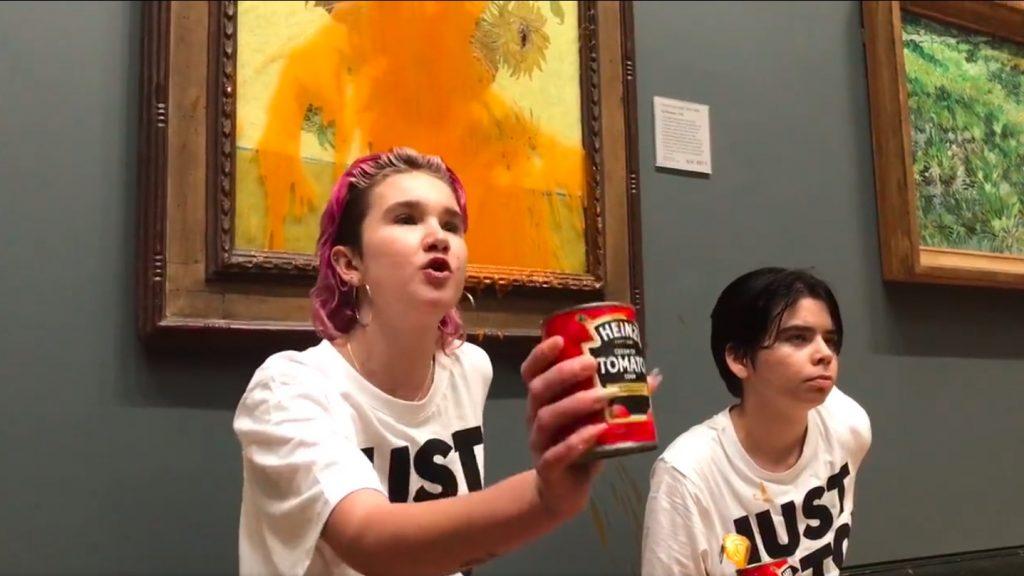 Two Just Stop Oil activists—Phoebe Plummer and Anna Holland—astounded attendees at London’s National Gallery when they threw cans of tomato soup on Vincent van Gogh’s at close range. An audible gasp of “Oh my gosh” rang out immediately from onlookers. The duo then emptied tubes of glue on their hands and affixed them to the wall before starting their speech: “The cost of living crisis is part of the cost of oil crisis, fuel is unaffordable to millions of cold, hungry families,” Plummer said. “They can’t even afford to heat a tin of soup.” She and Holland were both arrested, and the artwork’s confirmed fine now—protected, like the others, by glass. 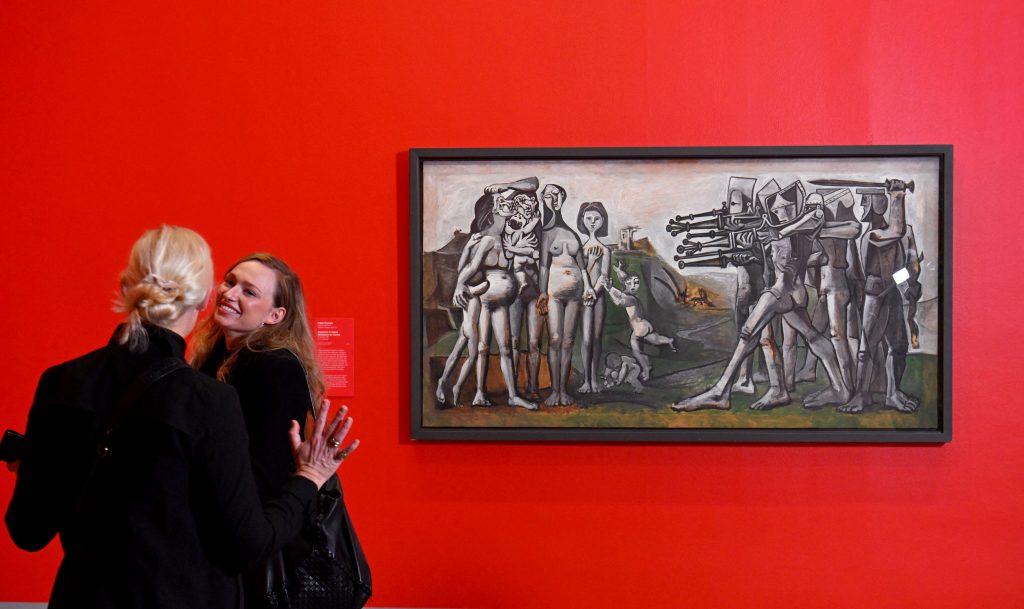 People stand next to by Pablo Picasso at an exhibition of more than 80 artworks by him at the National Gallery of Victoria in Melbourne on June 9, 2022. Photo: William West/AFP via Getty Images.

Two Australian activists from Extinction Rebellion stole the spotlight from Europe in all black outfits, gluing their hands to Picasso’s at the National Gallery of Victoria in Melbourne and unfolding a banner that read “CLIMATE CHAOS = WAR + FAMINE” on the floor. Perspex glazing protected the painting from damage. Some outlets wondered if this was the right work for their purposes, since it addresses the separate matter of American atrocities during the Korean War. Both protesters were arrested and later released. 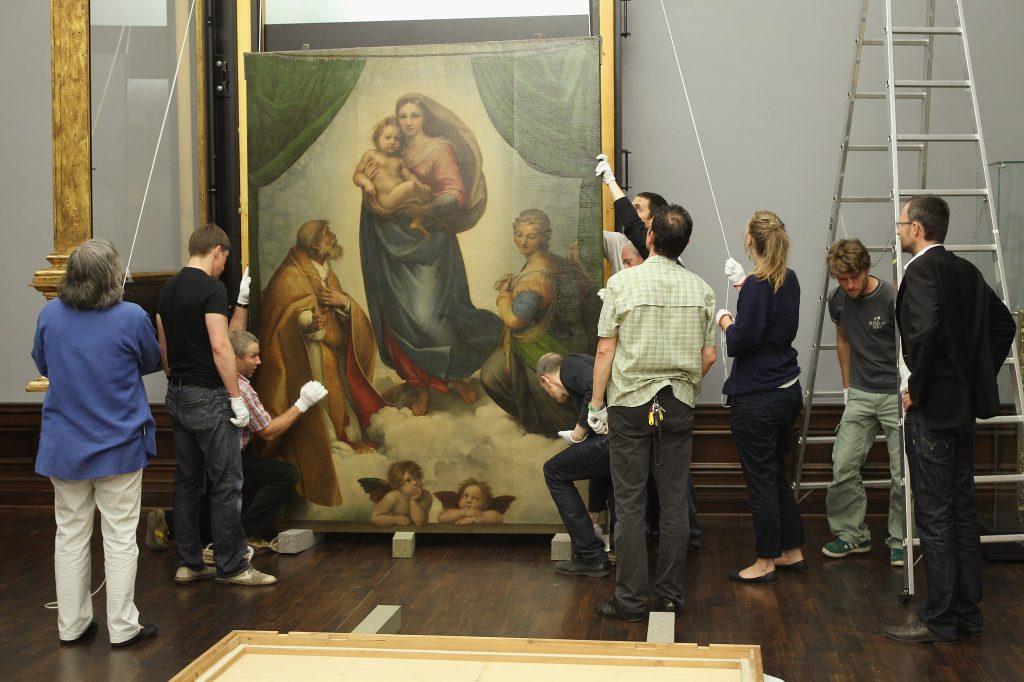 Gallery assistants guide the by Raphael into its new frame at the Galerie Alte Meister museum in Dresden, Germany, on May 23, 2012. Photo: Sean Gallup/Getty Images.

Jakob Beyer and Maike Gruns, both with Letzte Generation, skipped the foodstuffs and glued their hands to the ornate gold frame around Raphael’s at the Old Masters Picture Gallery in Dresden. said they told security it was “an act of solidarity for Dresden-based activist Christian Bläul, 40, who glued his hands to a motorway in Stockholm.” They chose this work to emphasize similarities between Jesus and Mary’s fear of the future, and humanity’s fears at this pivotal moment. Both were taken to jail. The picture was unharmed, but the Dresden State Art Collections is suing both activists for damage to its frame. 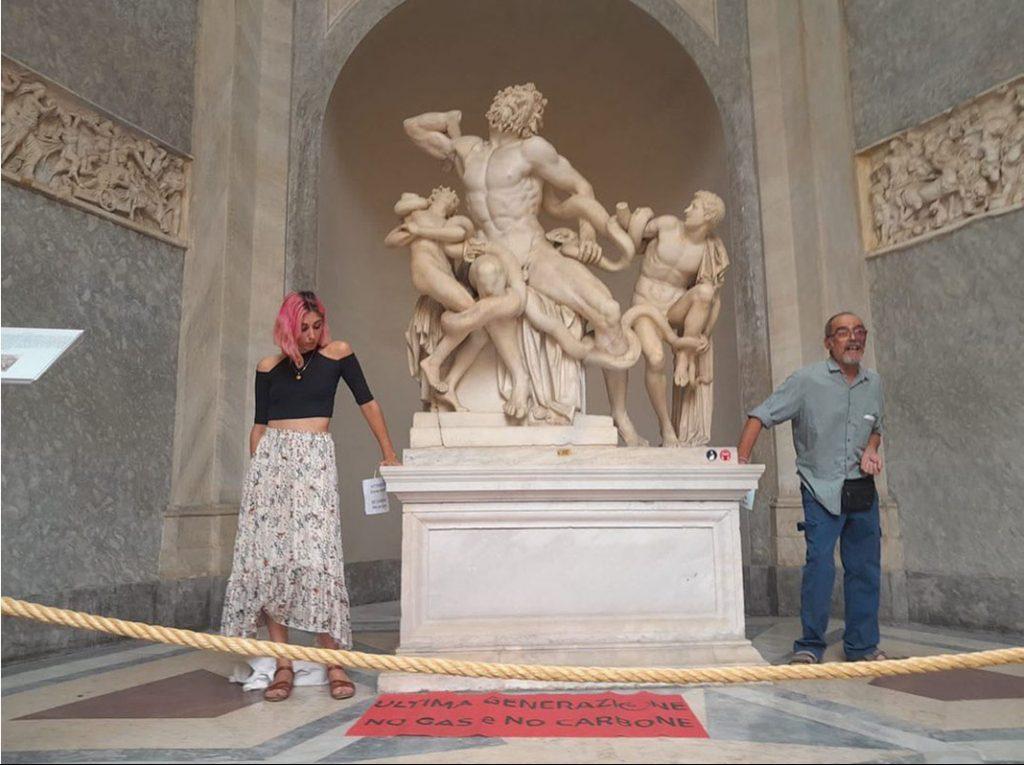 One morning, two activists from Ultima Generazione glued their hands to the base of one of ancient Rome’s most famous sculptures and unfurled their group’s banner. “Like Laocoon, scientists and activists are the witnesses trying to warn those around them about the consequences today’s actions will have on the future,” a statement from the group said. “Like Laocoon, scientists and activists are not listened to.” Minutes later, security cleared the room and seized cell phones from Ultima Generazione activists in the audience.

Four activists from Ultima Generazione glued themselves to famed futurist sculpture at the Museo del Novecento in Milan, choosing this work to highlight society’s need for a new direction. They targeted its plinth specifically to ensure the sculpture’s safety, and even “consulted restorers who advised them to use a suitable adhesive.” Law enforcement took them into custody, and the museum closed after. The work itself remains, in fact, undamaged. 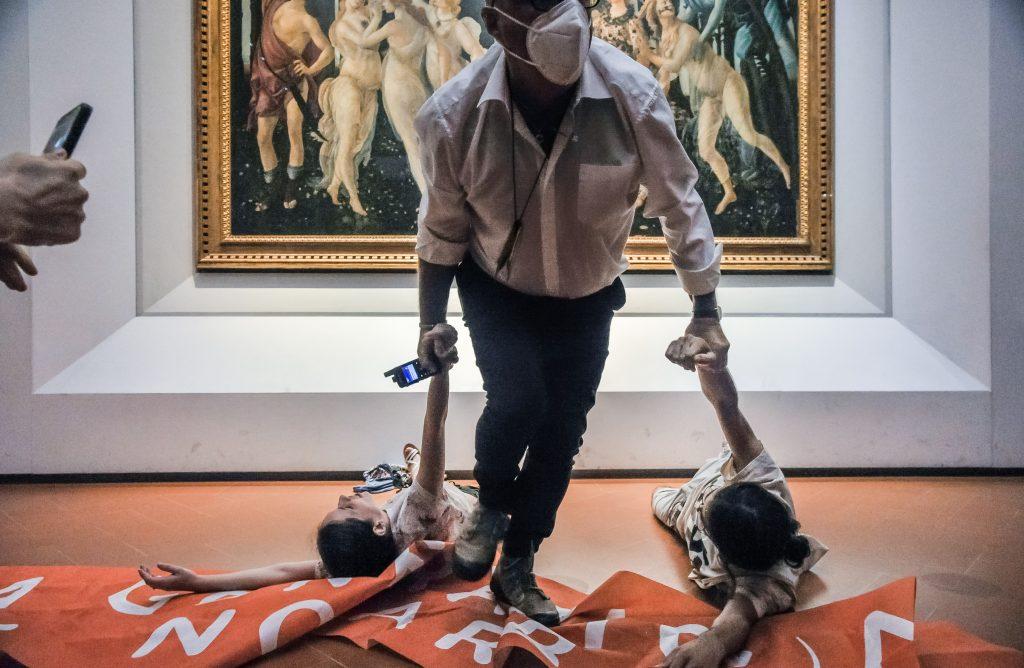 Protesters from the action group Ultima Generazione being dragged out of the Uffizi in Florence, Italy, after gluing their hands to the glass covering Sandro Botticelli’s . Photo: Laura Lezza/Getty Images.

Ultima Generazione sparked their first major art uproar when two protestors (a man and woman who each paid for admission to the Uffizi in Florence) glued their palms to the glass protecting Botticelli’s and displayed their signature banner. “Is it possible to see a spring as beautiful as this today?” Ultima Generazione asked in a subsequent statement. Both protestors were taken into custody, and the painting got through unscathed. 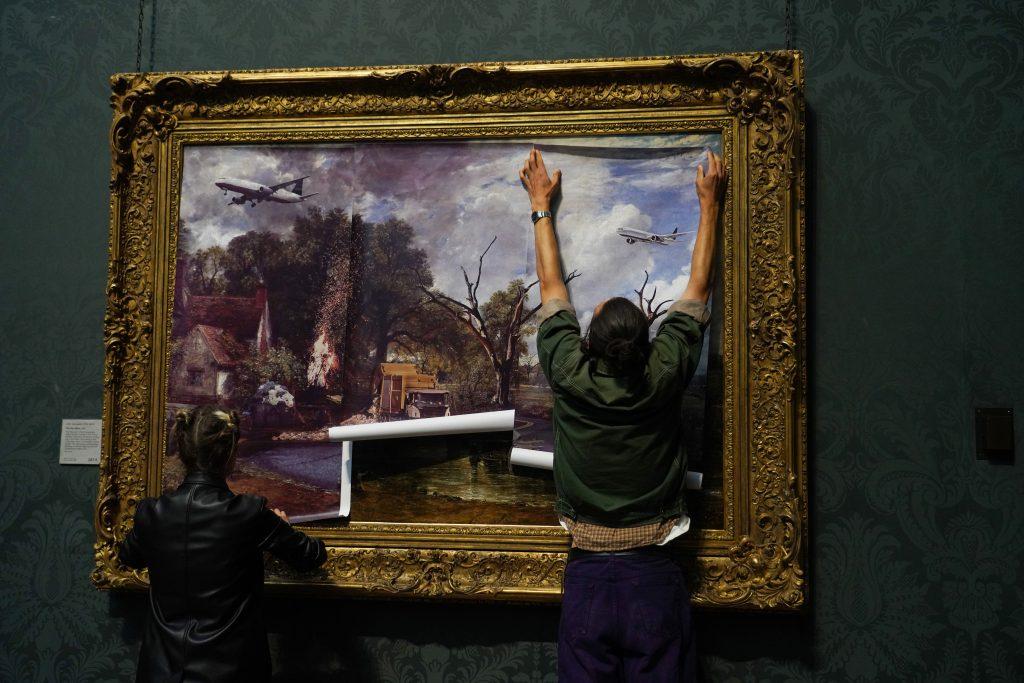 Just Stop Oil climate activists Hannah Hunt and Eben Lazarus glue themselves to the frame of by John Constable at the National Gallery in London, on July 4, 2022. Photo: Kristian Buus/In Pictures via Getty Images.

Just Stop Oil embarked on a rapid-fire campaign across the U.K. at the start of summer, targeting four historic paintings at four different galleries: Van Gogh’s at the Courtauld Gallery in London, John Constable’s at London’s National Gallery, Horatio McCulloch’s at Glasgow’s Kelvingrove Museum, and J. M. W. Turner’s Tomson’s Aeolian Harp at the Manchester Art Gallery. In each case, protestors glued themselves to the work in question, but got special treatment, covered with an updated scene in a state of climate apocalypse.

May 29— by Leonardo da Vinci

Maybe this is just nuts to me💀but an man dressed as an old lady jumps out of a wheel chair and attempted to smash the bullet proof glass of the Mona Lisa. Then proceeds to smear cake on the glass, and throws roses everywhere all before being tackled by security. 😂??? pic.twitter.com/OFXdx9eWcM

One absurd omen predated all these shenanigans. Several million news cycles ago, a man dressed as an elderly woman leapt from a decoy wheelchair—first, to bang on the work’s high-tech glass covering and then to assault art history’s most famous lady with cake. Fortunately, protective measures installed in 2019, following previous incidents, kept her safe. “There are people who are destroying the Earth,” the perpetrator said. “All artists, think about the Earth. That’s why I did this. Think of the planet.”