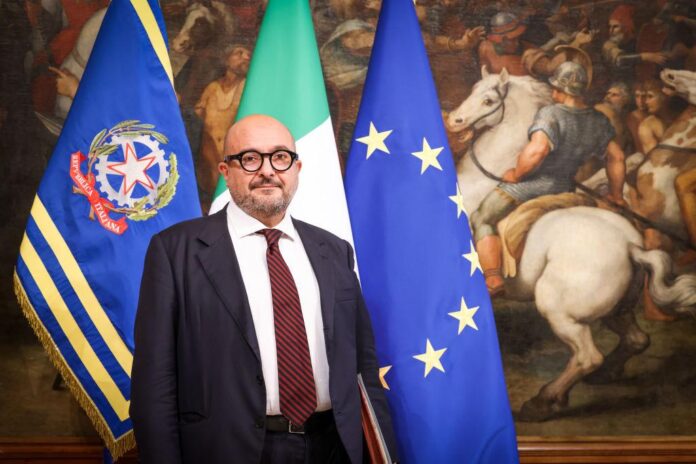 Asked whether he was the right man for the job, in one of his first interviews as Italy’s minister of culture, Gennaro Sangiuliano cited the poem ”To Italy” by Giacomo Leopardi. “O my country, I see the walls, arches, the columns, statues, and the towers of our ancestors,” he quoted from the 1818 work lamenting Italy’s decline from the Roman Empire’s past glory.

But beyond his apparent appreciation of 19th-century poetry, what else do we know about the new culture minister?

Sangiuliano is a journalist and author with degrees in law and economics. Before being named culture minister on October 22, he was the director of Italy’s state-owned news channel TG2, produced by the national public broadcasting company, Rai. He resigned from Rai—where he had worked since 2003, rising through the ranks—upon joining Georgia Meloni’s far-right government. But during his time at the media company, many left-leaning media outlets leveled charges of biased and partisan programming at TG2, which was seen by critics as Sangiuliano’s efforts to normalize right-wing discourse.

In Italy, Sangiuliano is also best known for his work as a writer of historical non-fiction focused on political figures. He has penned volumes on former U.S. politicians Hillary Clinton, Ronald Reagan, Donald Trump, and Chinese president Xi Jinping. His book on Russian president Vladimir Putin, Vita di un tsar (Life of a Tsar), is now in its fourth reprint. And in 2013, he co-authored a controversial critique of Germany’s role in the European Union, in a book titled The Fourth Reich: How Germany Subdued Europe.

Sangiuliano’s political experience, on the other hand, has been rather short-lived. Like Meloni, Sangiuliano was in the far-right Youth Front as a teenager. Between 1983–87, he was a district councilor in his native Naples for the Movimento Sociale Italiano—Destra Nazionale, a political party with neo-fascist aspirations. And in 2001, he ran for a local post at Naples’ Chamber of Deputies, but was not elected. In Meloni’s government, he is seen as a technocrat, and is listed as an independent politician with no direct affiliation to any of the coalition parties.

Sangiuliano’s first move in his new role was to greenlight two major exhibitions in state-run institutions: One devoted to painter Umberto Boccioni and the Futurism art movement of the early 20th century, which went on to inspire Fascist thinkers, and another focusing on the Renaissance. “The two historical and cultural moments, each in their own way, have projected Italy onto the world,” he told the Roman newspaper Il Messagerio.

Ahead of last month’s snap general election, Meloni’s far-right Brothers of Italy party, which is directly linked to post-fascist movements, ran on an agenda pledging to “defend Italy’s historic memory,” and to combat the “intolerable and widespread anti-Western ideology” of “cancel culture.” Meloni was sworn in as Italy’s first woman Prime Minister on October 22, forming a far-right coalition government with Silvio Berlusconi’s Forza Italia and Matteo Salvini’s Lega per Salvini Premier parties.

Sangiuliano hasn’t made his agenda on culture clear yet, but on Friday, October 28—the centenary of The March on Rome, when Benito Mussolini instigated a coup d’etat—he made a symbolic gesture with a visit to the Naples home of anti-fascist intellectual Benedetto Croce. The move echoed Meloni’s first address as Prime Minister on Tuesday, in which she distanced herself from fascism, racism, and anti-EU views.

A glance at other ministers in Meloni’s cabinet, however, reveals a disquieting picture. The new minister of education, Giuseppe Valditara, has published a discredited book claiming that immigration was the cause of the collapse of the Roman Empire. And the Ministry of “Family, Natality and Equal Opportunities” was given to anti-abortion activist Eugenia Maria Roccella.

In the past 77 years, when Italy introduced democratic elections at the end of World War II, the country has gone through 69 governments. So it’s understandable that the cultural scene is taking a “wait-and-see” approach to Sangiuliano’s appointment.

His predecessor, Dario Franceschini, was the longest-serving minister of culture—from 2014-22, with a one-year interruption from June 2018 to September 2019—and he was able to introduce significant reforms. The center-left politician streamlined bureaucracy and connected the management of cultural heritage and tourism. Most notably, he did away with a dated structure that only allowed directors of national museums to grow into the position after a career in the government-run museum system.

Effectively, foreign museum managers could work in Italy’s most prestigious institutions for the first time following this reform. It also opened up opportunities for independent Italian curators who haven’t held positions in the state-owned institutions.

Many are concerned that Meloni’s government would reverse this.

‘We Differ in View’: A Painting Recently Downgraded by the National Gallery Will Be Displayed as a Vermeer at the Rijksmuseum Anyway