Home News ‘He’s Entitled to His Opinion’: We Spoke to the Fan Artist Who... 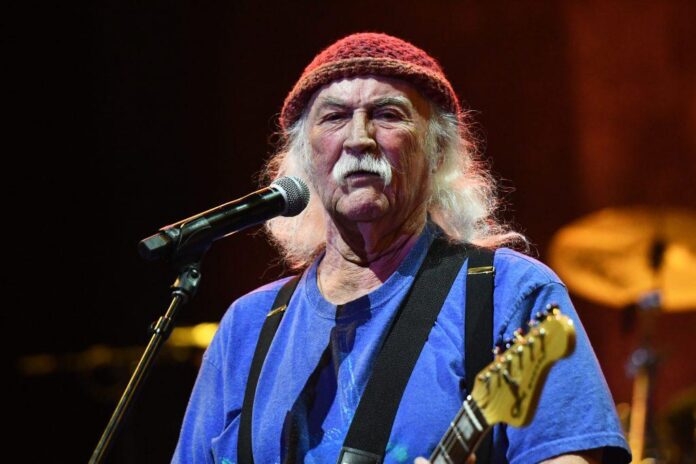 David Crosby, of the band Crosby Stills and Nash, has become the subject of widespread derision for his insulting response to a fan who shared a portrait of the 80-year-old musician on Twitter.

DJB Sackett, a 54-year-old charity worker from Sheffield, U.K., started making art for the first time in 30 years after being furloughed from his job during the pandemic.

On July 16, he shared a colorful illustrated portrait of Crosby in profile, wearing a red wool hat (a staple of his wardrobe, knit by his wife), on Twitter. “Hi @thedavidcrosby,” Sackett wrote. “Hope you are keeping well. Did a picture of you…. Thanks for the music.” 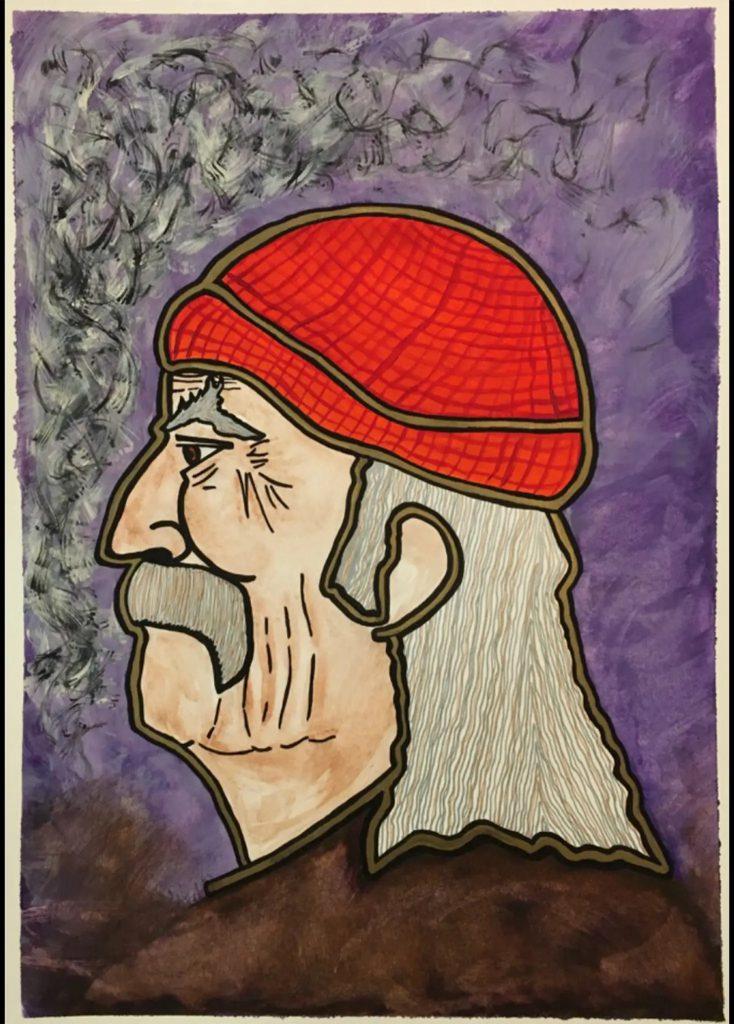 In response, Crosby was, shall we say, less than gracious. “That is the weirdest painting of me. I have ever seen …..don’t quit your day job,” he wrote.

Sackett had originally posted the portrait, titled , in May on his Instagram, where he reminisced about discovering the musician’s discography in the 1980s.

“I will always be thankful for this and have absorbed and slowly collected Croz’s music over the years, stretching back to his days as a founding member of the Byrds and forward to the autumnal creative burst of recent years,” Sackett wrote. “David Crosby’s body of work shows his wonderful way with melody and harmony, and is a truly a thing of beauty.”

But when Crosby gave his decidedly negative opinion on the piece nearly two months later, the internet, as it is wont to do, took notice.

“This is the weirdest reaction to a fan trying to do something nice I have ever seen. …don’t quit your day job, David Crosby… but maybe stop being an unkind schmuck on Twitter,” writer and photojournalist Gregory Anderson wrote on the social media platform.

David Crosby heartlessly crushes an adoring fan who did a portrait of Crosby by telling the fan not to quit his day job. I’m thinking art contest. Do a Crosby portrait & send it his way. Make it fun. Be creative. You don’t need to be an artist. In fact, it’s better if you’re not. https://t.co/98I6mjnkqe

David Crosby’s shitty attitude towards a fan who took time to create a piece of fan art highlights a very real issue, that many people in similar positions as him don’t care about hurting others. Don’t let a decrepit voice like his stop you from sharing your authentic selves.

Social media users widely condemned Crosby for being so rude in response to a heartfelt tribute. Many also disagreed with the musician’s assessment of the portrait, with at least one other celebrity chiming in with praise for Sackett’s fan art.

Arquette might be on to something: The piece suggests a religious icon, elevating Crosby to the status of musical sainthood.

We spoke with Sackett over email about his art, the groundswell of support he’s received since it went viral, and how he feels about Crosby after what he describes as “a very strange couple of days.” 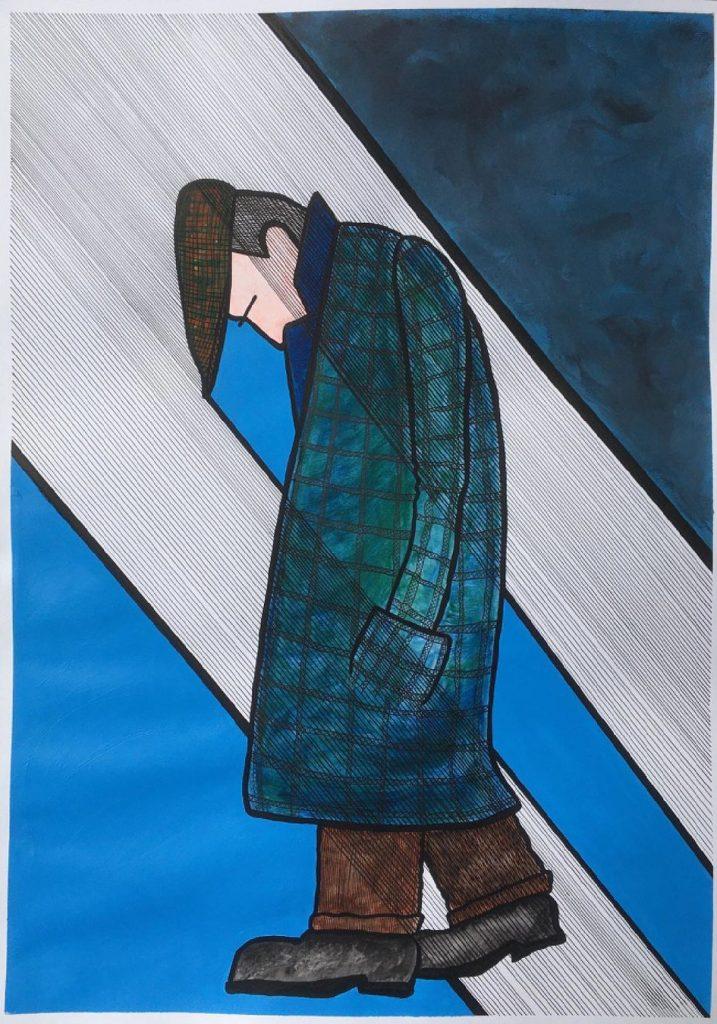 Did you study painting in school? Why did you stop and what have you been doing the last 30 years—or to put it another way, what your day job?

I was grew up in Kent on the edge of London. I only studied art until the age of 14 at school, then it fell by the wayside. I was encouraged to concentrate on the sciences for exams, which were seen as more likely to help me get a good job.

Music became my main creative outlet, and I played in a couple of bands as well as solo for many years. I worked in various jobs in London, including a rehearsal studio and an arts center. My wife and I relocated to Sheffield in 2000, and I have been working for the same charity here for the last 14 years. 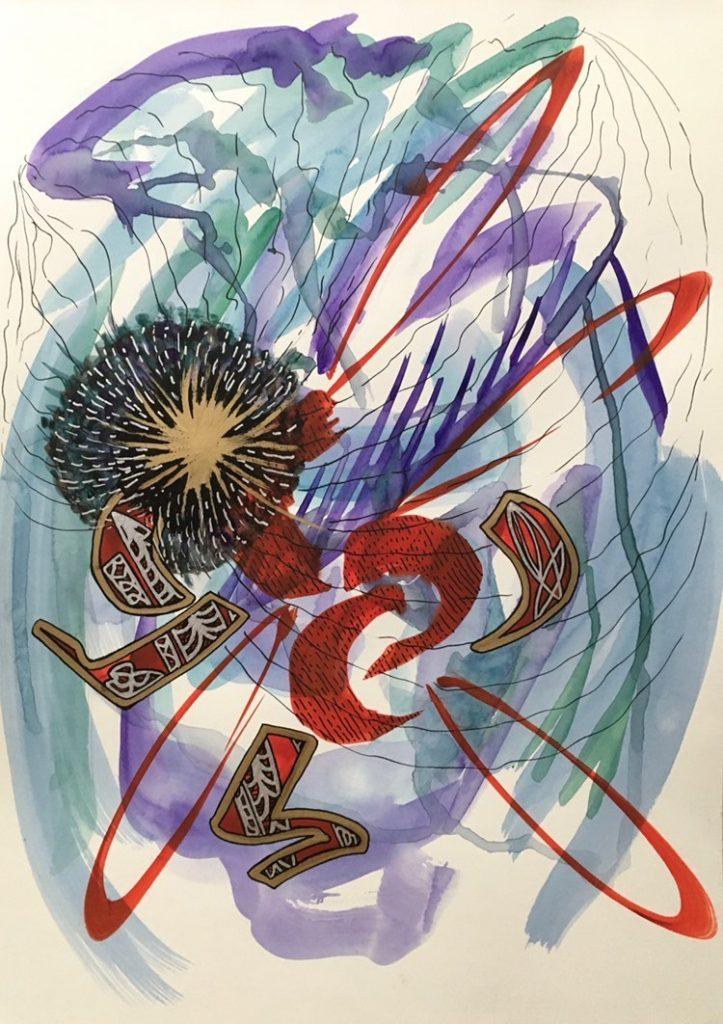 When did you decide to paint this tribute to Crosby? Were you happy with how it came out? What did you think of his response and has it changed your view of either the artwork or the musician?

Back in May, I posted some photos of sky trails on Instagram. It got me thinking about David Crosby, who released an album called in 2017. It’s the third of an incredible five albums he has released since 2014. I listened to the CD while driving my wife to work that day, and decided to try doing a painting of him as I saw him now, to celebrate this flourish of late career releases.

Were you happy with how it came out?

I was happy with the piece. It ended up quite religious in style, maybe due to the colors. 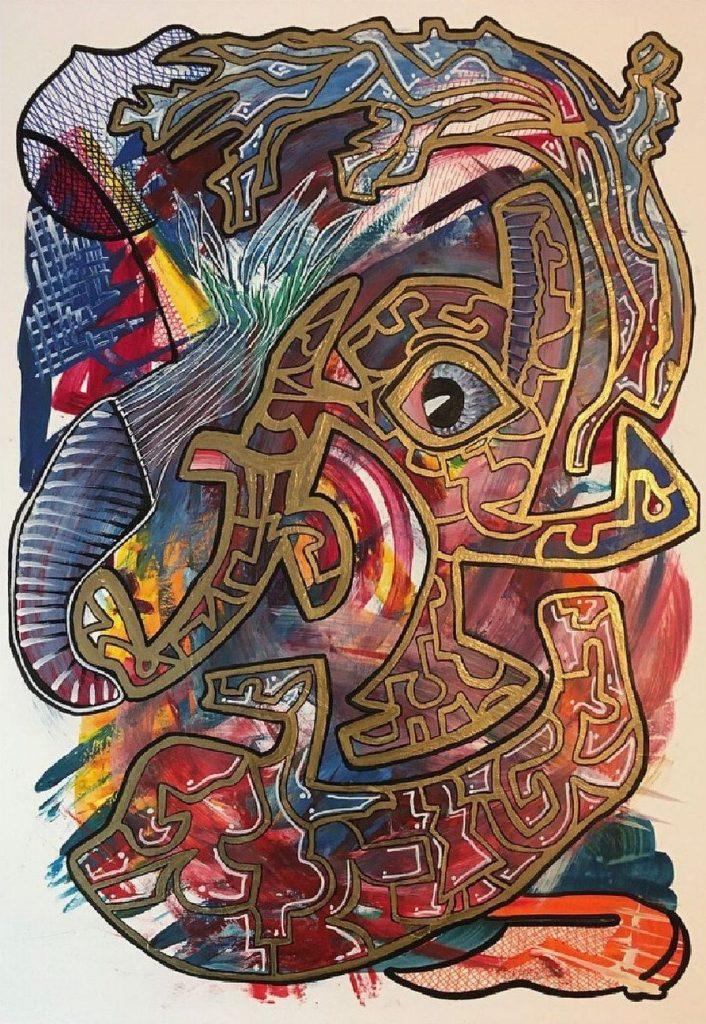 What did you think of his response and has it changed your view of either the artwork or the musician?

I was disappointed that he didn’t like it, as I had created it as a tribute to him. I’m such a fan of his music. But, of course, I couldn’t expect him to like it, and he is entitled to an opinion. I knew he had a reputation for being a somewhat prickly character, so I wasn’t too surprised at the tone of his reply.

I still appreciate him as a musician. I’m proud of the painting. 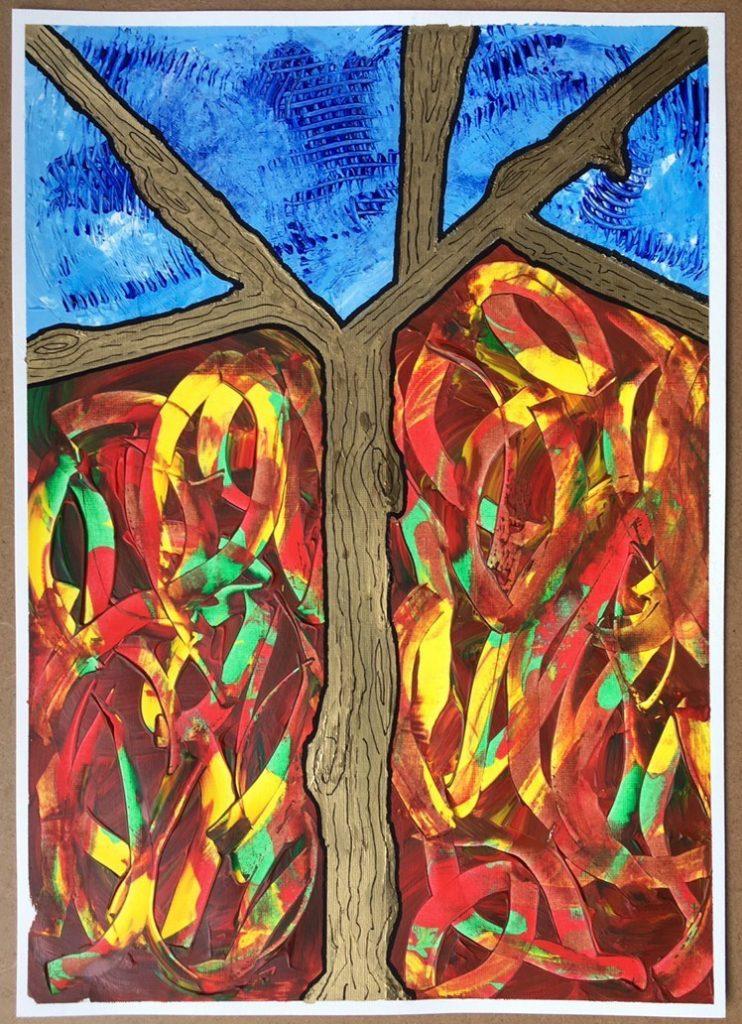 Do you think the internet is being too hard on Crosby?

I can see why people have responded strongly and passionately to his less than subtle reaction to the painting, but some of the more personal attacks on him have been hard to read.

I am hugely humbled and encouraged that so many others seem to like the painting and will hopefully like some of the other work I will create. The whole situation that has blown up around the painting has been in turns surreal, amusing, and bemusing.

How did you begin making art during the pandemic?

I fell in love with art again when furloughed from the charity for a whole year at the beginning of the pandemic. I bought some cheap watercolors and black and gold ink pens, and started to paint and draw.

I was inspired by Grayson Perry and his Art Club (broadcast during lockdown on Channel 4 in the U.K.) which had a profound effect on me. I also followed Martin Rowson, a U.K. political cartoonist whose work is featured in the .

He put up regular #Draw challenges to lampoon figures on the political stage. I participated in many of these, which kept me quite busy. Now, working part time for the charity, I am able to dedicate time during the week to continue to grow and develop my naive self-taught style. 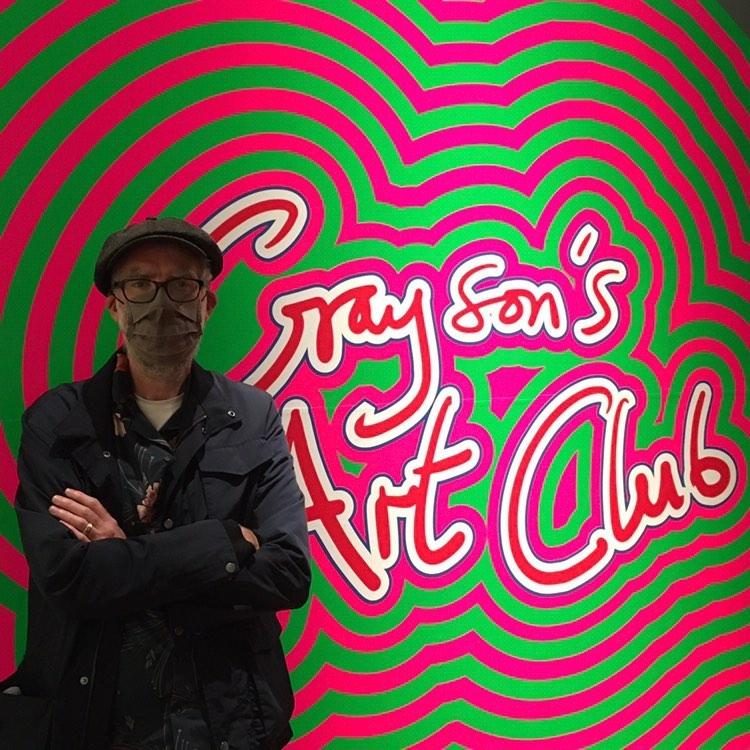 I have quite a strong drive to depict what’s going on around me in terms of U.K. and world politics and events, mainly using simple cartoon illustrative techniques. More recently I have created digital pieces to keep up with the political work, using a simple graphic style to convey thoughts and messages quickly to cover the debacle of the current U.K. government and in support of Ukraine and other issues.

My main love, and the work I get most pleasure from, are my less obviously themed figurative and more abstract pieces. Sometimes I get a figure or scene in mind and sketch out ideas before proceeding with the main piece. 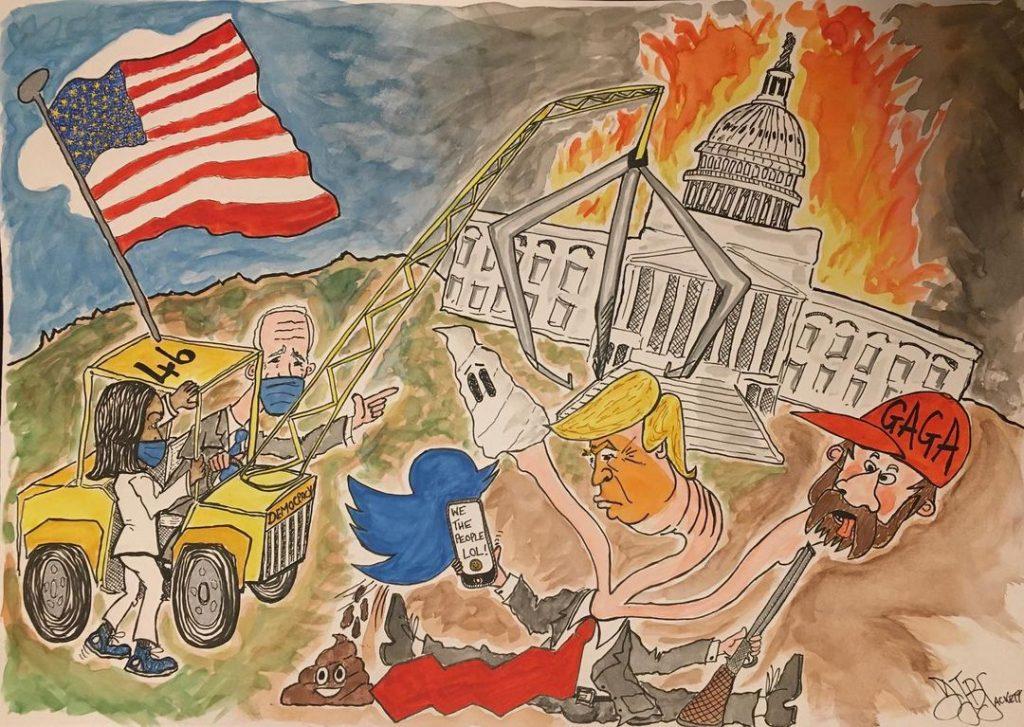 More often than not though, the colors evolve as the pieces does. Many of my more abstract pieces begin with rushes and swathes of color. Sometimes I begin to see shapes and apply black, gold, and silver inks to bring the picture to life.

Some of the shapes speak to me of primitive, mythical, and Celtic ancient styles as well as graffiti and modern abstract work. Imagined objects, creatures and human forms then appear as the works take on their final form. My gold ink was originally bought by mistake but has become a feature.

What do you plan do with the Crosby portrait? What is next for you as an artist?

Not sure, Maybe I could auction it off for charity…?

I’d like to get more of my art out there and to develop as an artist, as I have a lot to learn. Maybe start selling my work and exhibiting more if possible if there is an audience for it once this has all calmed down

The Met’s Next Costume Institute Show and Gala Pay Homage to Karl Lagerfeld, the ‘Hitchcock of Fashion’