Home News How 12 Female Ukrainian Artists Are Processing a Pivotal Moment for the... 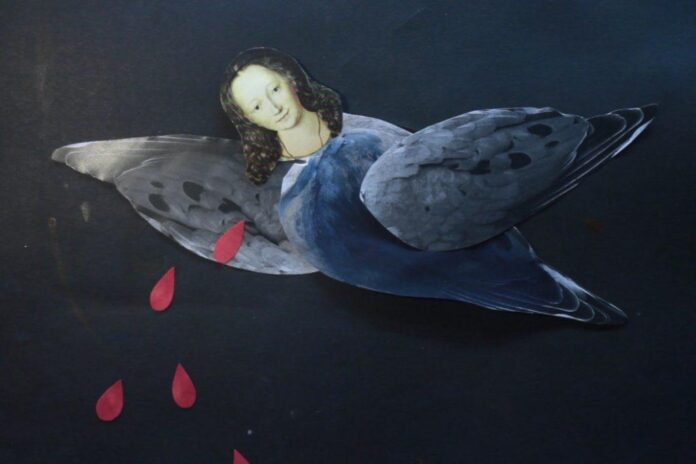 Reports from Ukraine are full of devastating photographs of smoldering ruins, destroyed villages, bloated corpses, and ravaged landscapes. It is all too easy for such images to be subsumed into a generic narrative of the horrors of war. But like all wars, this one is particular, the outcome of a set of specific historical circumstances experienced by actual individuals and groups in ways that cannot be generalized.

“Women at War” is an exhibition of works by twelve Ukrainian women artists who have lived through the current conflict and its precipitating events. Curated by Monika Fabijanska for Fridman Gallery, the show takes us inside the psyches of a group of artists who have learned to live with what a 2018 exhibition of contemporary Ukrainian art in Budapest termed a state of “Permanent Revolution.”

Some of the works here were created in the heat of the current war. Others emerge from previous moments in Ukraine’s struggle for self-determination in the years since the fall of communism, reminding us of the long roots of today’s crisis. Running as undercurrents through the show are the complexities of geography stemming from the tensions between a Western-leaning west and a Russia-leaning east, and the upheavals of a post-Soviet (dis)order that has seen waves of mass protests, endemic corruption, two revolutions, Russia’s annexation of Crimea, and the looming threat that has now erupted into full-scale war.

Why only women? In the essay that accompanies the show, Fabijanska notes, “Women are generally absent from the historical accounts of war, but violating a woman is seen as a violation of land and nation.” Having curated well-received shows on eco-feminism and rape, Fabijanska brings both these topics to bear here. Her chosen artists suggest how Ukrainian national identity is tied both to the land and to figures of the “great mother” as personified by the Soviet Motherland and the pre-Christian goddess Berehynia. The latter has emerged in recent years as a somewhat equivocal symbol of Ukrainian nationalism, representing both strength and a return to old, pre-Soviet values. Restricting her purview to women thus allows Fabijanska to deal with fraught definitions of feminism in a post-Soviet country where putative equality under the Communist system long masked a deeply misogynist reality even as the demise of that order has given way in many parts of the country to a regressive return to “traditional” roles. 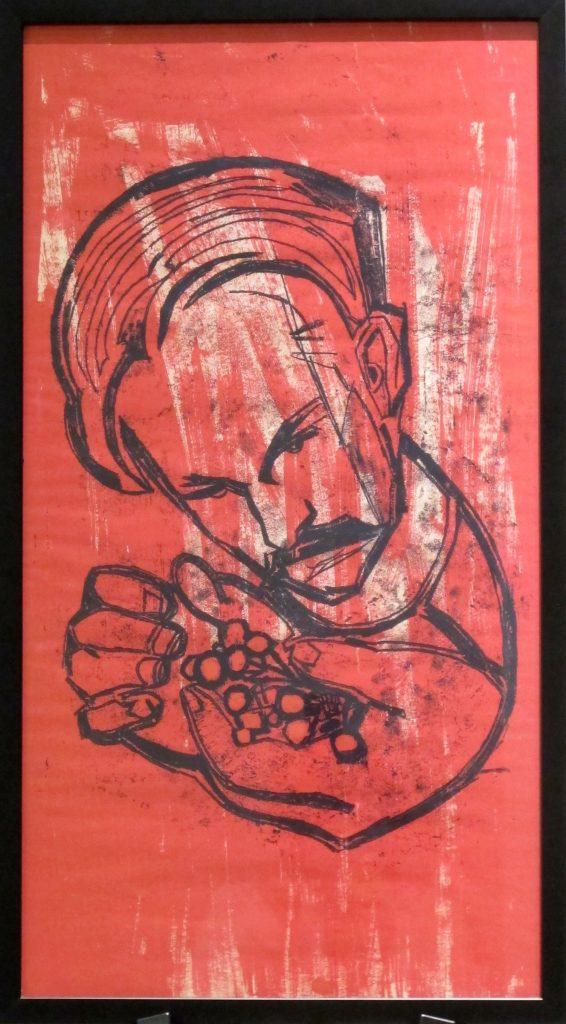 Alla Horska, Portrait of Ivan Svitlychny (1963). Courtesy of the Ukrainian Museum in NewYork.

A modest linocut of a man clutching what appear to be seeds or cherries serves as an entrée into the show. Created in 1963 by the Ukrainian activist and artist Alla Horska (1929-1970), it depicts Ivan Svitychny, a Ukrainian poet and fellow dissident. Inclusion of this work by Horska draws attention to the troubled history of art and politics in Ukraine. Known in the Soviet era for her murals, mosaics, and stained glass in the Donbas region (many of them now presumed destroyed by Russian bombs), as well as her protests in favor of Ukrainian human rights, Horska was murdered in 1970 while under surveillance by the KGB. 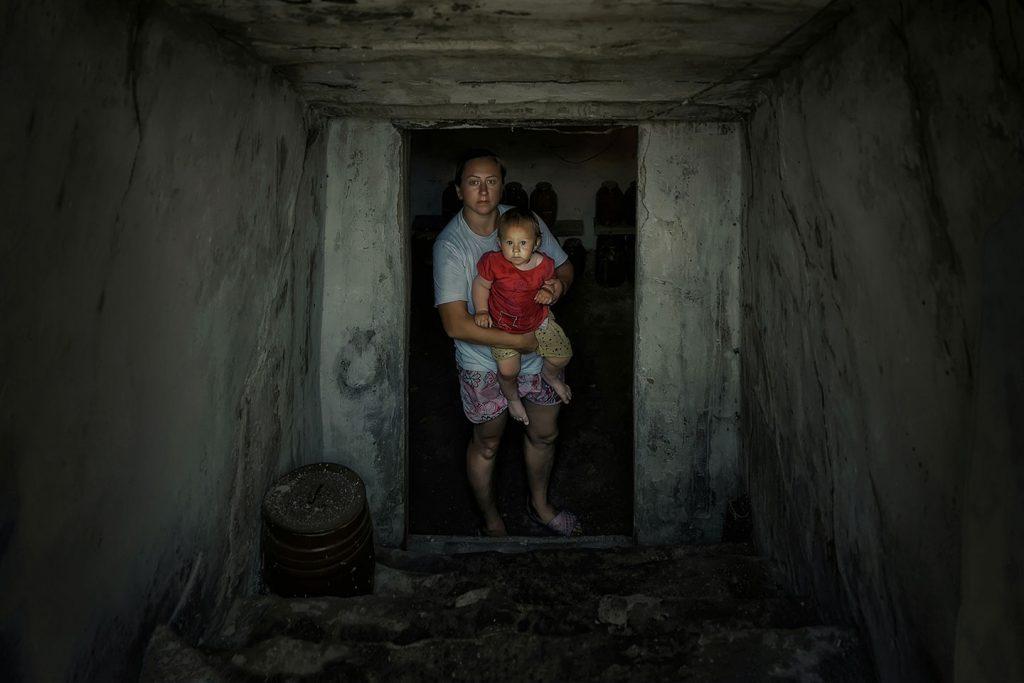 The rest of the artists in “Woman at War” belong to the post-Soviet era. Several of them assume the role of witnesses. Alena Grom presents several photographs from her “Womb” series in which women emerge from the shadows of the bunker in which they have been hiding. Clutching their children, they suggest an inversion of the classic trope of Madonna and Child as they appear enveloped not in radiant light but in a darkness that is as tomb-like as it is womb-like. Though they seem frighteningly current, Grom’s photos were taken in 2018 during earlier fighting in the eastern region of Donbas where Russian separatists have been battling Ukrainian government forces since 2014. The bunkers are in fact abandoned mine shafts, relics of the economic lifeblood which has made the area a coveted prize for Russian forces. 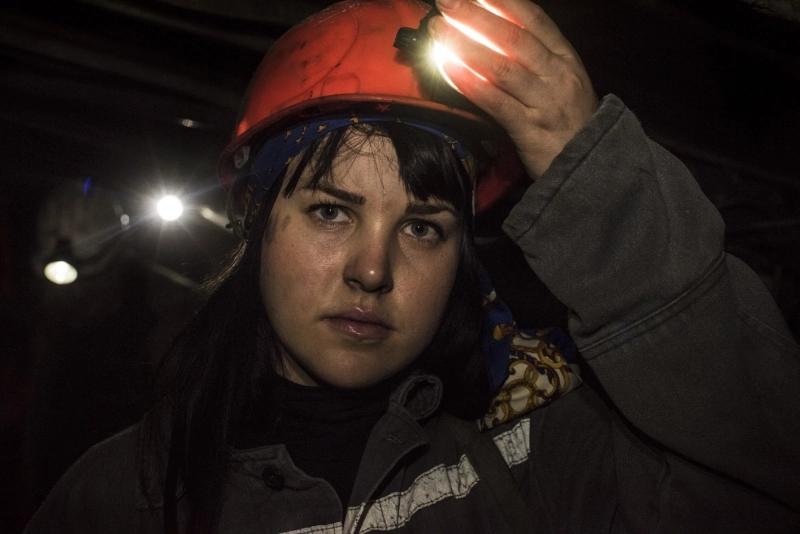 Yevgenia Belorusets presents images from the same time and location. She photographs women workers who continued to labor in the still functioning mines during the occupation of the area by separatist forces. Despite disruptions in their salaries and efforts by the occupiers to get them to join in the fighting, they kept the mine open. In the photographs their faces are smudged by coal dust but hopeful and even at times joyful, offering portraits of resistance and courage as they attempt to cling to shreds of normalcy as the world crumbles around them. Sadly, after the expulsion of the separatists, the returning Ukrainian government closed the mine, negating their efforts. 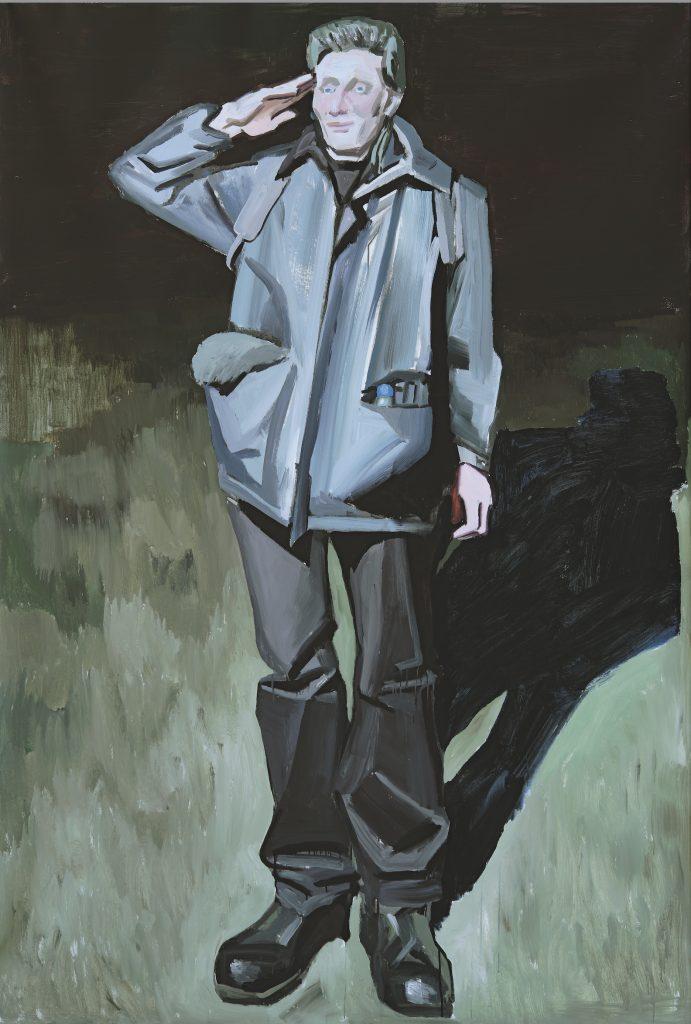 Two artists reframe images of the war by adapting art historical traditions to the current situation. Lesia Khomenko offers a deflated version of the heroic tropes of Soviet Socialist Realism in a painting of her partner dressed in rumpled civilian garb as he volunteers for the Territorial Defense of Ukraine. Meanwhile, Anna Scherbyna undermines the Romanticism inherent in the 18th century European tradition of picturesque ruins with a series of miniature paintings that depict the devastation of Donbas.

Other artists suggest the psychic toll of life in a constant war zone. Oksana Chepelyk’s 2014 video evokes a mother’s recurring nightmare as a frenzied woman runs with her little boy though abandoned streets as if caught in an endless and inescapable maze. Olia Fedorova’s (2022) is a cry from the current conflict. Created in March of this year as the artist shuttled between her apartment and a bomb shelter in Kharkiv that has undergone constant Russian shelling, this work comprises an anguished poem scrawled in red ink on torn bed sheets. The text channels her rage into images suggesting an identification with the forces of nature “May you choke on my soil./May you poison yourself with my air./ . . . And may you be afraid every second.” 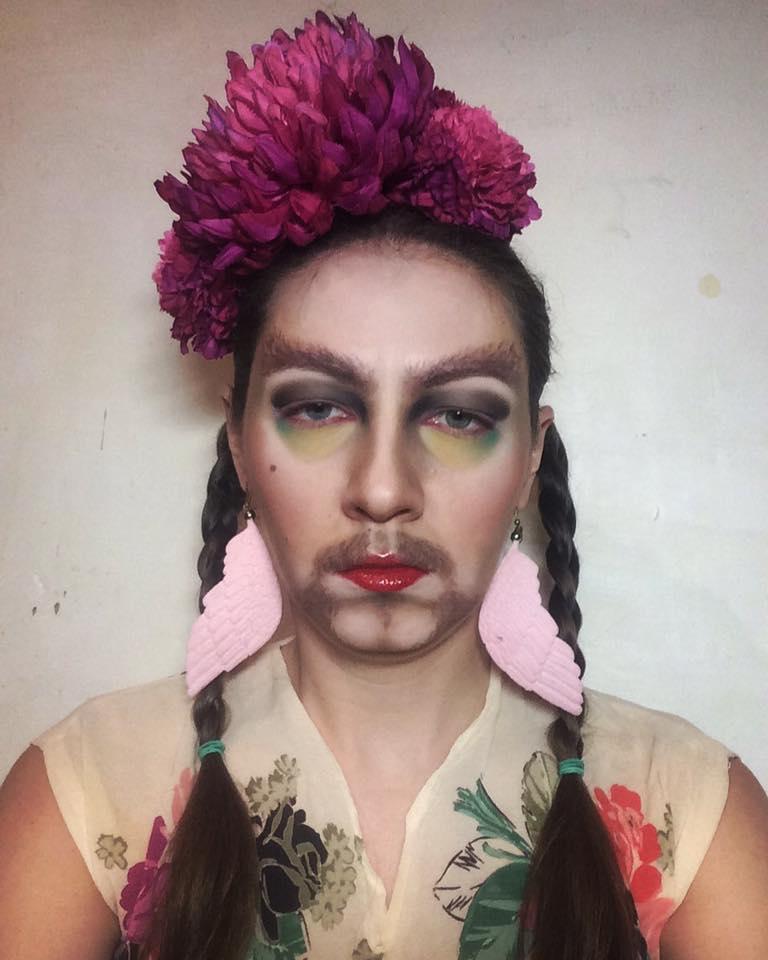 Kateryna Yermolaeva presents an equally personal response to trauma. In photographic self-portraits she assumes personas that combine stereotypes and aspects of her actual experiences, among them sex workers, housewives, and men in drag. With these characterizations, she suggests how the ongoing conflict has induced a splintering of consciousness.

Zhanna Kadyrova may have the biggest international profile of the artists here, having represented Ukraine in the 2013 Venice Biennale. She presents documentation of a project titled , the Ukrainian word for bread. “Palianytsia” is apparently unpronounceable by Russians and hence serves as a kind of password for Ukrainians in occupied territories. In her video, Kadyrova collects river stones, polishes them into semblances of bread loaves and presents them as an offering to local villagers. Kadyrova created this installation and performance as a way to re-establish a sense of place following her evacuation from Kyiv to Western Ukraine following the Russian incursion. 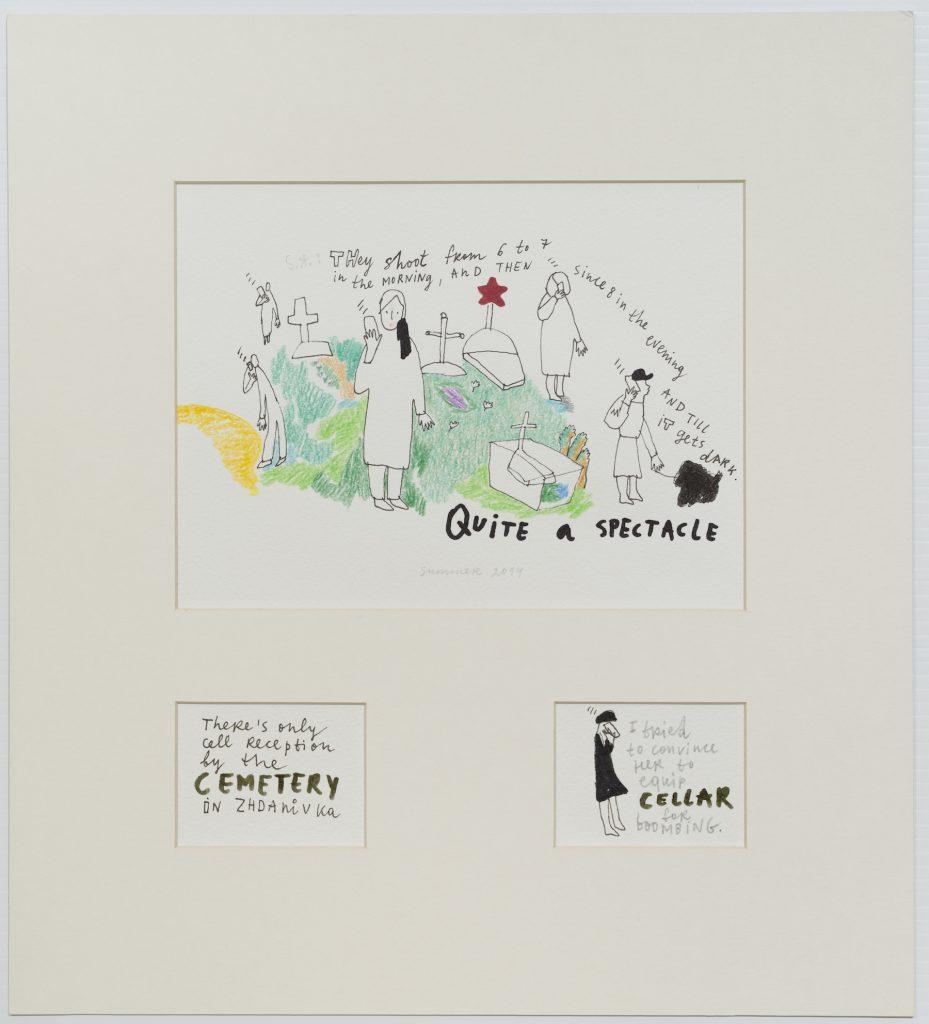 Among the most compelling works are several diaristic projects. Alevtina Kakhidze’s (2014‐2019) is a series of drawings based on texts and cell phone conversations with her mother who remained in the occupied territories in Donbas and was constantly forced to cross the border into unoccupied Ukraine to collect her pension. Kakhidze combines snippets of their conversations with childlike drawings to evoke the utter surrealism of life in a place where the only good cell reception is in the cemetery, while a trip to the border that used to take an hour and a half now takes eleven hours. The series ends in 2019 when her mother dies of cardiac arrest during a pension run. 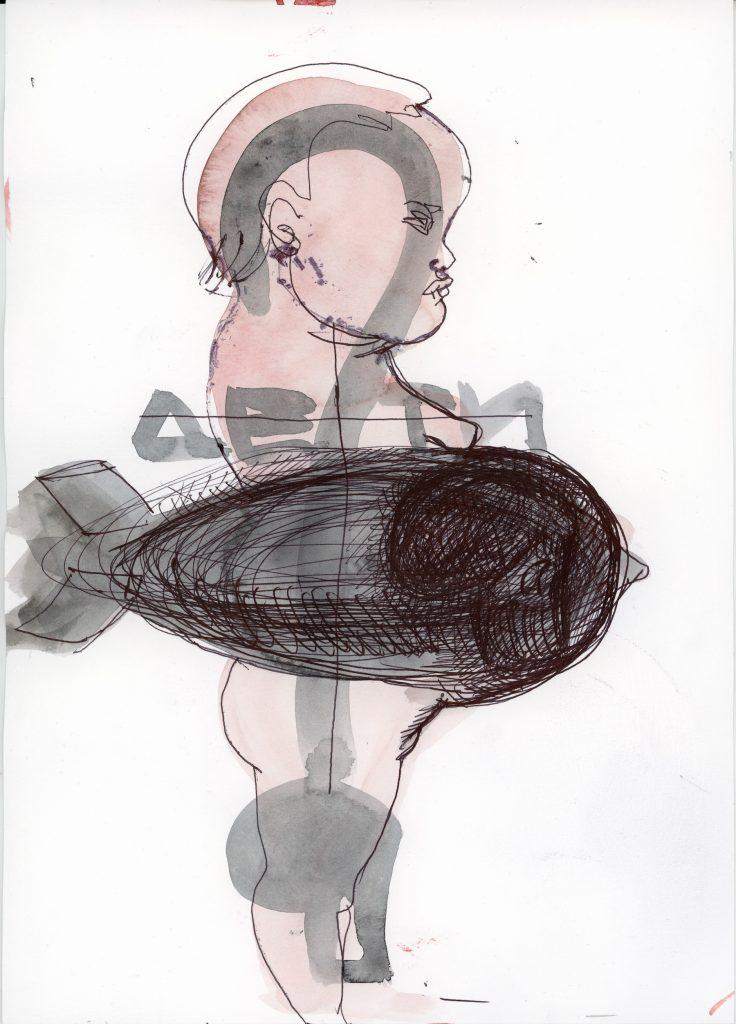 Vlada Ralko’s 2022 is more expressionistic. Her drawings, created with overlays of ink and watercolor realized in black, red, and flesh tones, mingle such symbols of Russian imperialism as eagles and hammers and sickles with bombs, skulls, mutilated female bodies, murdered children, and weapon-like phalluses. Watery stains of red suggest pools of blood while spreading blots of black evoke an obliterating void. Symbols meld to create disturbing hybrid images that suggest the impact of abstract political ambitions on defenseless human bodies. 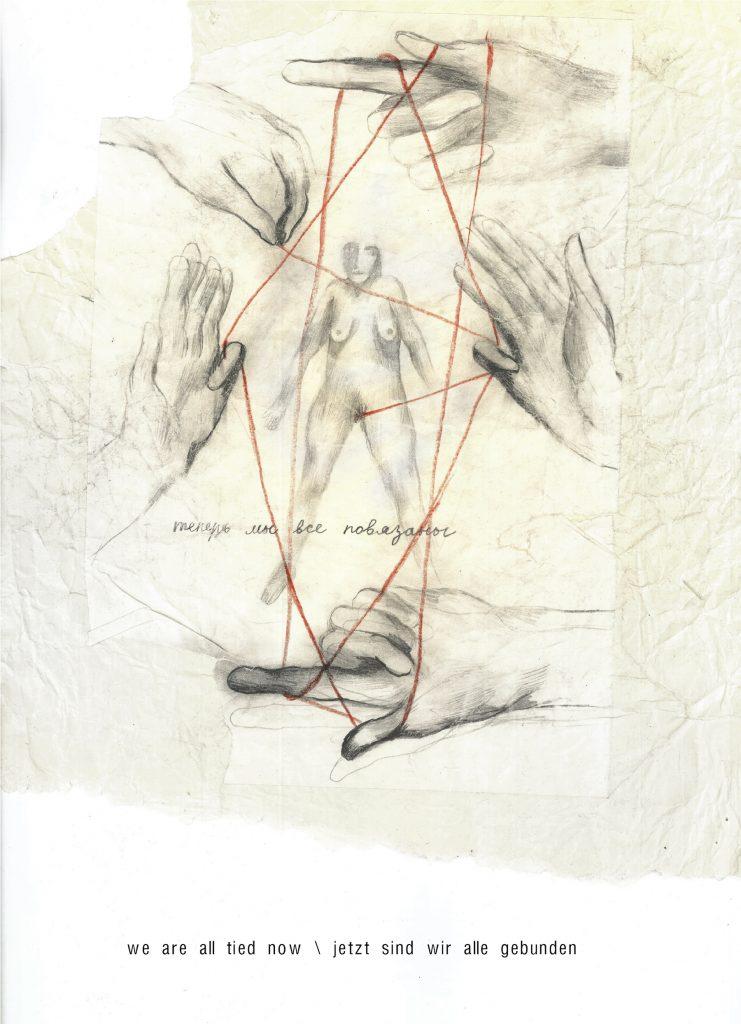 Dana Kavelina, we are all tied now (Exit to the Blind Spot series) (2019). ©Dana Kavelina. Courtesy of the artist

Something of the same commingling of flesh and inanimate objects animates Dana Kavelina’s drawings from the series “Exit from the Blind Spot.” At once delicately drawn and darkly brutal, they are reminiscent of Nancy Spero’s equally lacerating series . Kavelina presents female bodies enmeshed in violence: the red lines of a cat’s cradle pin them down, or real red threads drip from their mouths. They are victims who have been deformed by war.

Fridman Gallery is also screening Kavelina’s remarkable twenty-minute video (2020). This kaleidoscopic collage of images, animations, video clips, and sounds of war is accompanied by a mesmerizing voiceover in which one woman addresses another in a poetic text delivered with a detached and pensive intonation. Musing on the contradictions of war, violence, and desire, she offers a communication that is both personal and universal. 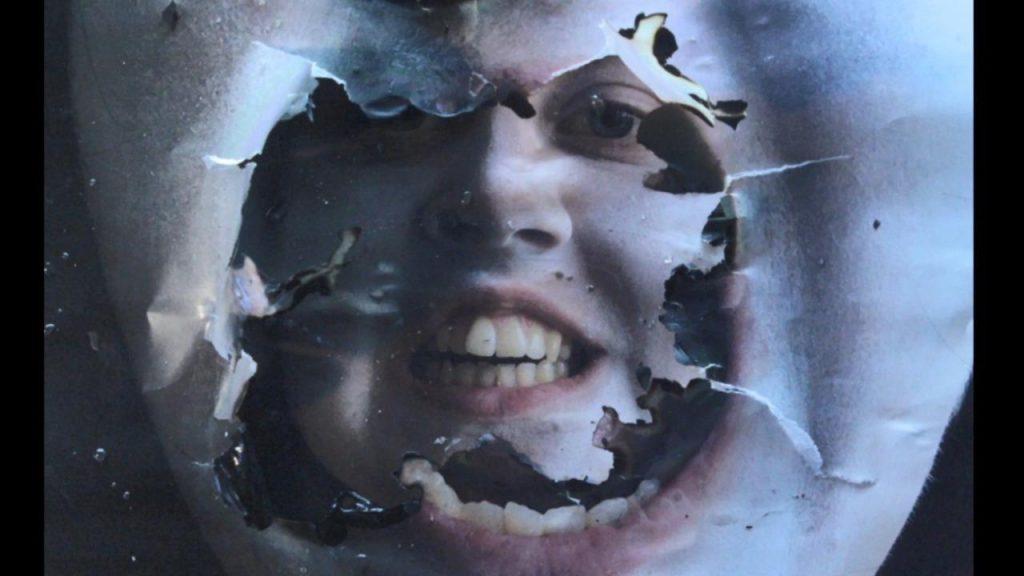 Throughout the video, different kinds of narratives collide: Soviet-era propaganda films heroizing the Donbas coal miners run in reverse as if to undo the rape of the earth, while raw footage from the recent war lingers over bodies of the dead. These clips are intercut with brief animations that present female-headed doves, the dismembering of a woman’s body, explosions of roses, and representations of Our Lady of the Sorrows, a devotional image of the Madonna pierced with swords.

Running like a dream narrative over these images, the voiceover reveals the narrator’s identification with the violated land and suggests her willing submission to death and desecration. The work ends with a loop that dwells on an explosion whose gorgeous red suggests blood, roses, and fire. In an interview on the film, Kavelina remarks, “I suggest looking at all wars from the perspective of rape because every rape, even in peacetime, carries the seed of war. It shows the very capability of one human being to humiliate, and to display his anatomical power over, another human being—in this sense, the penis is the earliest weapon of war.” 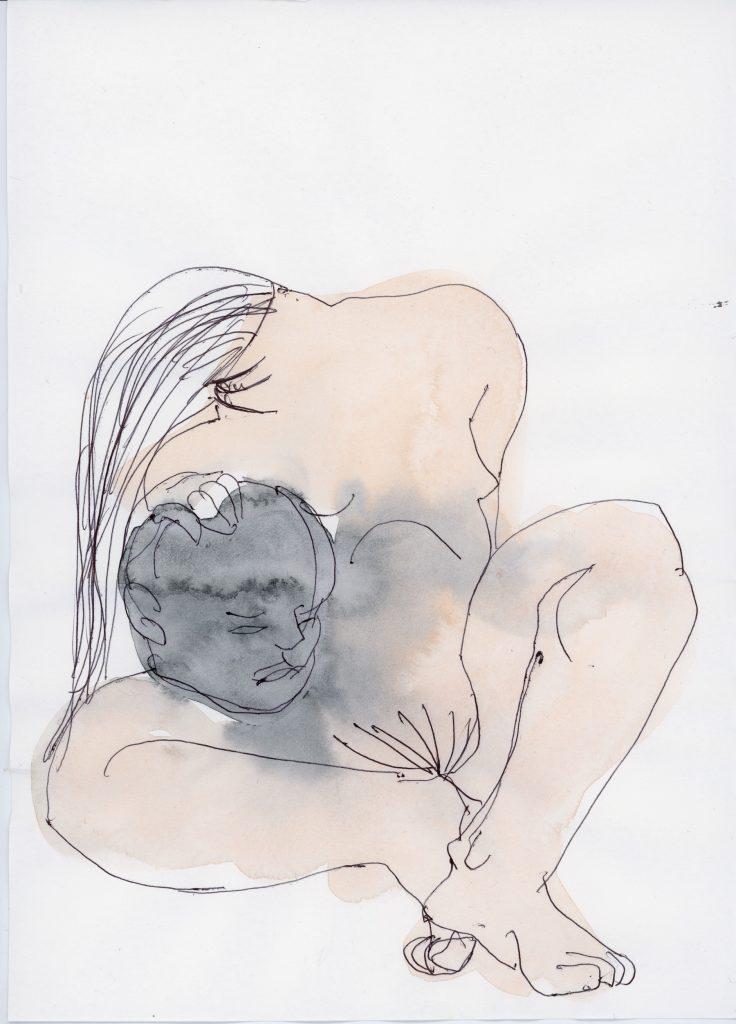 Having spent most of their adult lives in a state of political upheaval, post-Soviet era Ukrainian artists find it hard to distance themselves from politics. Many of them have been deeply involved in their country’s successive revolutions. But for the women in this exhibition, art and politics are not identical. In 2019 I interviewed a number of Ukrainian women artists for a forthcoming book on Ukrainian art. At that time Vlada Ralko told me, “From the beginning of the Ukrainian revolution, I clearly understood that civic engagement for me is not enough, that I would not be able to survive without examining the new dramatic, complex, contradictory, and sometimes bloody conflicts in the Ukrainian recent history through the eyes of an artist.” She added, “If some people view my recent work as a manifestation of patriotism or political demonstration, they are mistaken… Political changes began to tell me about my own personal things, which were hidden, sleeping, but suddenly came out to light.”

Ralko might have been speaking for all the artists in this exhibition. Feminism in Ukraine takes a different tack than feminism in the West. It is not so much that “the personal is political,” as Western feminists have declared. It is more that “the political is personal.” Seared into their bodies and their consciousness, the current war reveals women artists reevaluating their status as women, citizens, and members of the human race.