Home News How Many Colors Can Most Of Us Actually See?

From observing distant galaxies in light years from us to perceiving invisible colors, Adam Hadhesie at the BBC explains why your eyes can do incredible things. Look around you. What do you see? All these colours, walls, windows, everything seems obvious, as if it were meant to be here. The idea that we can see it all because of the particles of light – photons – that come out of these objects and get into our eyes seems incredible.

A healthy human eye has three types of cones, each of which can distinguish about 100 different color shades, so most researchers agree that our eyes, in general, can distinguish about a million shades. Nevertheless, the perception of color is the quite subjective ability, which varies from person to person, so to determine the exact figures are quite difficult.

Human eyes are not only their soul but also a whole world of mysteries. Why is it said that people have never seen blue before, although Egyptians used to color their tombs and jewelry with it? How do some people manage to see ultraviolet radiation, and others – to distinguish 100 million shades at once? Is there really a creative vision? There are so many questions that modern scientists must surely have answers to.

USA Art News decided to find out how different people’s visions differ depending on their way of thinking, culture, time, and other circumstances. Carefully, after this article, you can see the world in a new way.

Why did ancient people not distinguish the color of fuchsia from white, and purple was mistaken for blue? 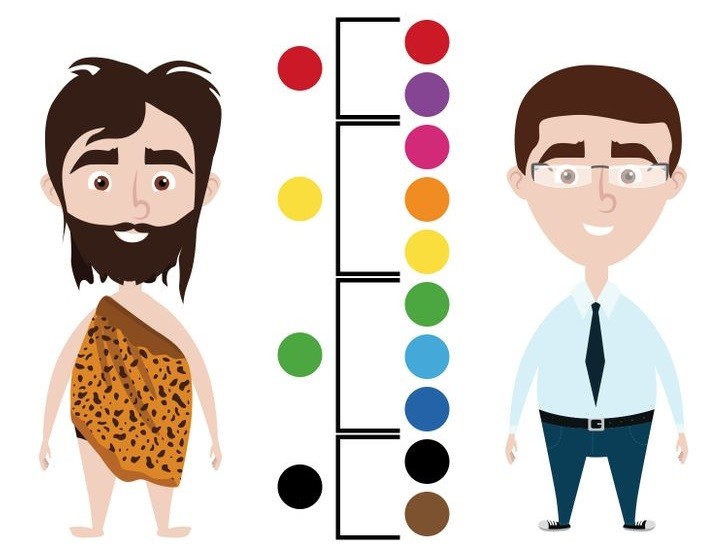 10,000 years ago, people saw colors just like us but used generic names. Light shades were equated to white, dark shades to black. The color of fuchsia was bright and light, so it ranked together with white or yellow. Purple and blue were similar and standing in the same row, equaled to dark or black. Later, the hues began to spread between red, yellow, green, and blue-green (violet and blue fell into the category of blue-green together).

In speech people described shades of color through a context – as today we explain the taste. The words “sweet”, “salty”, “sour”, “spicy” or “bitter” are often not enough to convey the exact meaning, and we use clarification: compare, for example, the phrases “like sour lemon” and “like sour coffee”.

Did the ancient Egyptians see blue, but the Greeks did not? 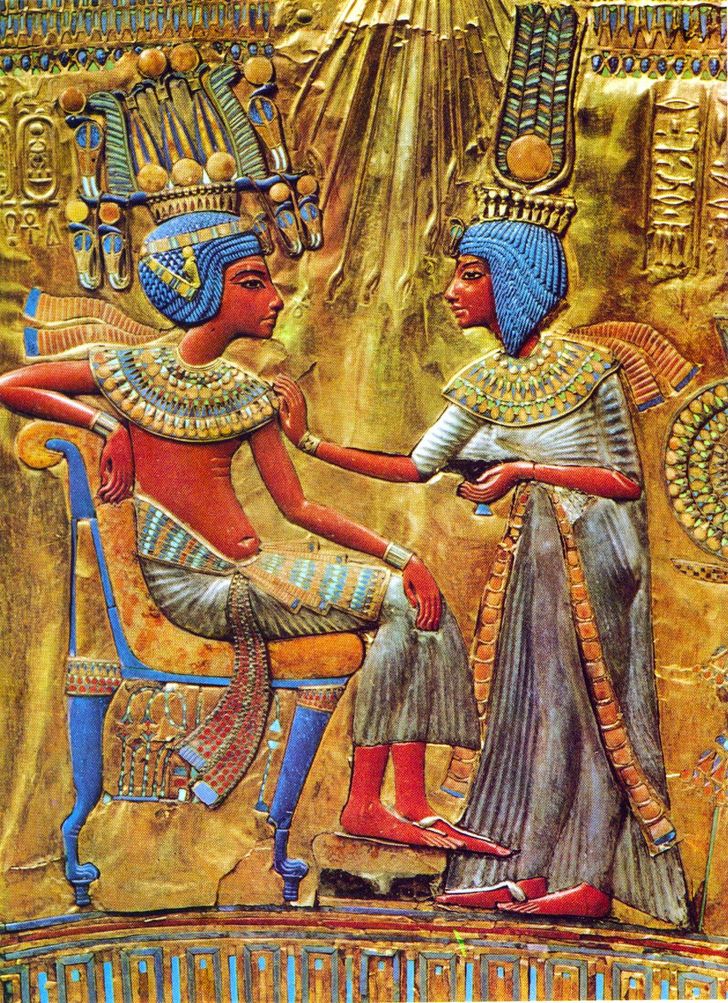 Egyptologist Richard H. Wilkinson observed that there was a specific meaning for each color.

For example, artists always depicted men with red-brown skin, women with light brown skin, and gods with gold skin because they believed that the skin of gods and pharaohs really was made of gold. The exception was Osiris, who got black or green skin, the symbol of new life and resurrection. This emphasized his story: he was killed by the god Seth and resurrected by the goddess Isis to rule the underworld. 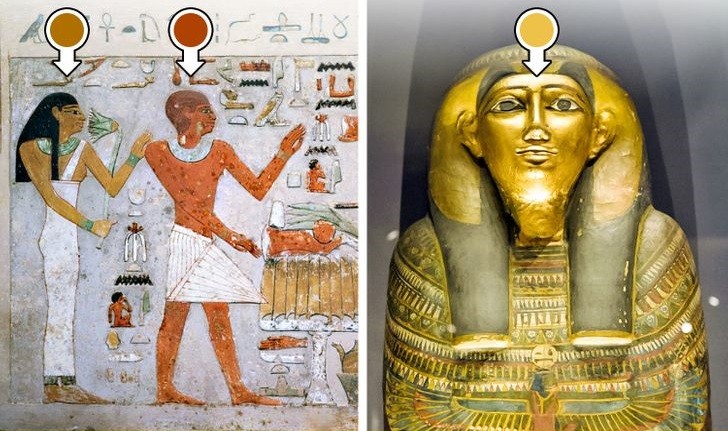 The dark blue and blue colors were the most popular among Egyptians, they symbolized truth, reality, birth, and life. The sky and waters of the fertile Nile were blue, and the fertility amulets and tattoos for women in the form of the Devil’s god were more often also blue. But the meaning of each color was inextricably linked to the context of the image.

This is more noticeable in the language of the ancient Greeks: describing objects, they grouped them by their qualities. For example, the sky was called bronze because it was as dazzling as the blade of a sword. The sea is purple-red, like wine, because they both symbolize freshness, life. But is it true that the Greeks did not distinguish the blue color?

A riddle: what did this ancient Greek statue look like in the original? 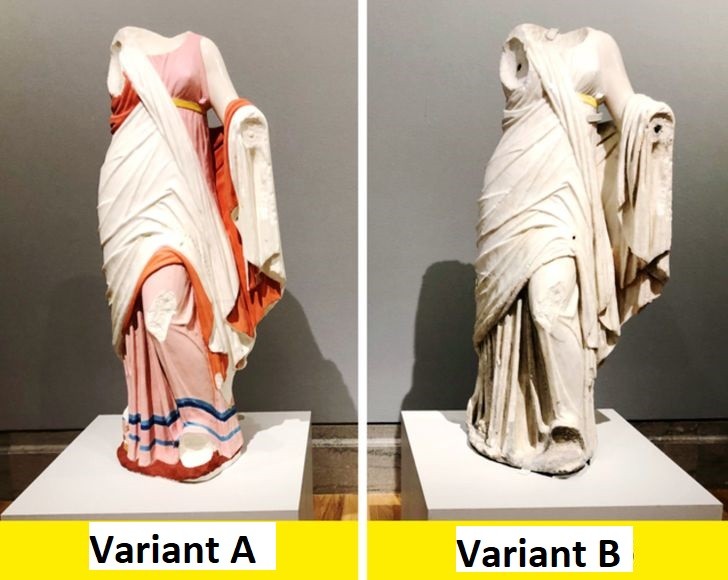 Scientists Vinzenz Brinkmann and Ulrike Koch-Brinkmann have proven that ancient statues and public buildings are made in colour. The pigments in the paints were mineral, but the carrier itself was organic, so over time bacteria destroyed it and the paints crumbled. It turned out that our ideas about the minimalism of colour in ancient times are far from reality. And, of course, the Greeks perfectly distinguished shades of blue, singling it out as a separate category of color. 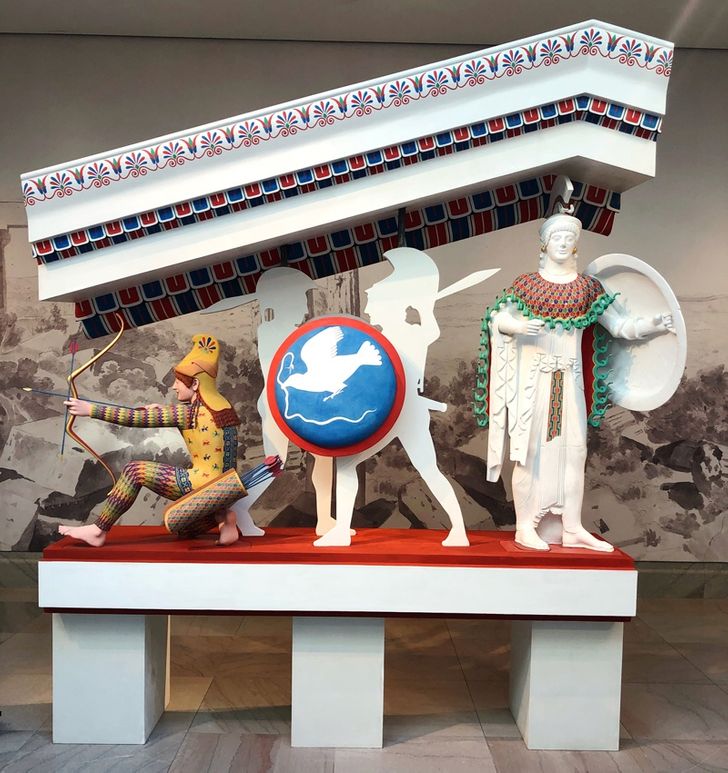 Based on research in 2007, American and German scientists developed an exhibition of ancient statues and buildings in their original colors. It is hard to believe that hundreds of years ago ancient Greek artists used such a variety of colors, jewelry in the form of bronze inserts, and shaped pupils of black stone. 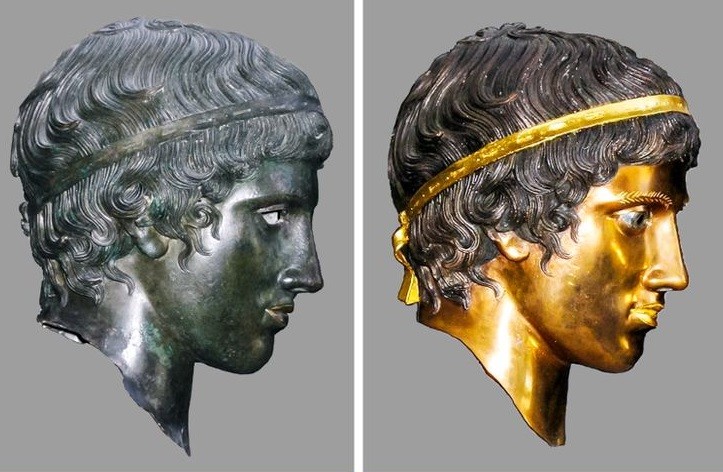 Even Aristotle, the ancient Greek philosopher, and educator of Alexander the Great said in his works about 7 main colors: black, white, red, yellow, green, blue, and purple. He associated them with 7 notes, sky objects, and days of the week.

Today we name 11-12 main color categories in the language, and this indirectly indicates the degree of development of society. There are those who easily define the slightest difference in shades of color and use 10 times more definitions.

No one distinguishes blue until a one-year-old age

Some people see 100 times more colours than others. Count the number of stripes you see: 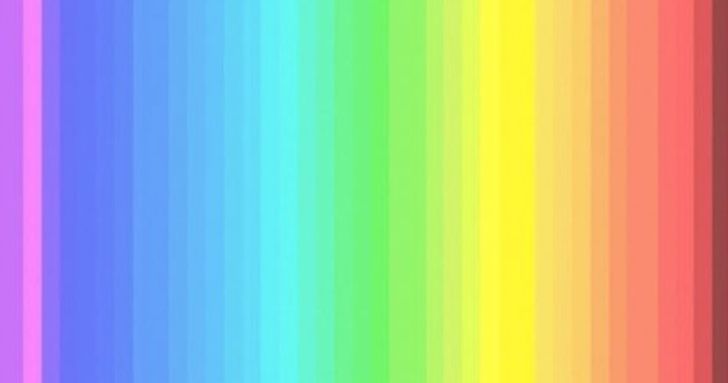 Less than 20 stripes: you may have 2 types of light-sensitive cones. Like 1/4 of the world’s population. You can see a little less color than most. To see the full range will help special glasses or applications designed for all types of color blindness.

From 20 to 36 stripes: you probably have 3 types of photosensitive cones. You, like most people, distinguish a large number of color shades.

Over 37 stripes: You seem to be a Tetrachromat. They have 4 types of light-sensitive cones at once. These people recognize about 100 million colors like bees, some birds and the artist Concetta Antico, who creates these paintings:

The presence of 4 types of cones is a rare mutation and is found among women who have men with color blindness. But even people with the same eyes – twins – perceive color differently. The brain itself determines color depending on mood, emotions and memories.

How do I describe a color if there is no name in the language? 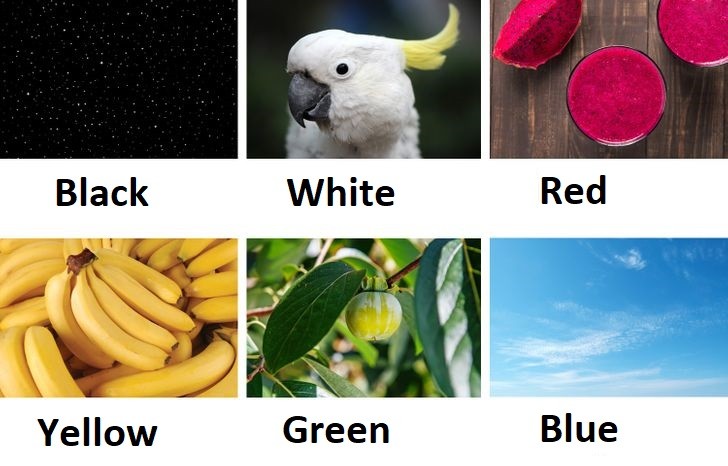 Some people have noticed that we often apply different names to the same color due to perception difficulties. Remember the mystery of the dress: some people thought it was white and gold, others thought it was black and blue.

In the language of Yele, used on an island in Papua New Guinea, there is a different approach to defining color. Instead of a separate name, the name of an object is used, which looks the same under all circumstances. For example, the word “night” means black, ” Kakadu” means white, “juice” means dark red, “immature” means green, “water at the reef” means blue.

But even this approach will not protect you from the illusions that your own brain intentionally creates. Look at the picture and tell what color the circles behind the stripes are: 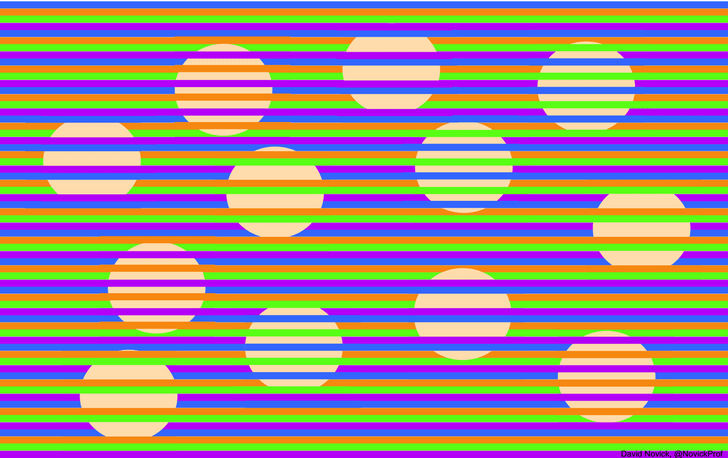 The thing is, they’re all the same color. It’s an optical illusion of Munker-White. Because of the colorful stripes in the picture, it seems like circles of 4 different shades. Do you think that’s an easy task now? Try to answer exactly what color the heart is behind the stripes:

The answer is, they’re all the same color – yellow.

Yes, the neurological phenomenon of synesthesia is also a game of our mind. Synesthesia –  when people imagine that the letter “D” is definitely blue, and the name “John” can cause a bitter taste in their mouths.

Famous synesthetists were Franz Liszt, Duke Ellington and Van Gogh. If you think you are also a synesthetic, test yourself and get involved in research to help scientists discover this amazing condition.

Why do people with autism see the world differently?

Their brain perceives what it sees in a different way: it focuses on the center of the image and perceives the whole image without paying attention to significant details such as people’s faces or bright accents. From general to particular: the longer eyes are seen, the more expressive each detail in the brain becomes.

This way of perceiving information can be an advantage for a detective. In most people the brain sees a picture the other way around: at first, it remembers private, significant details, and then tries to complete and form a complete image.

Is there a creative vision in reality? 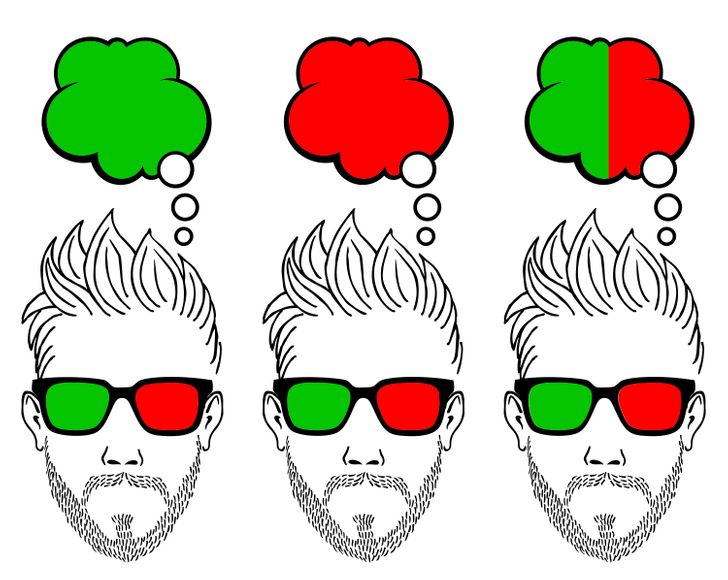 Let’s say that each of your eyes sees a separate image. As a result, the average person’s brain constantly chooses which one will be the main one – and this is called binocular competition. A person sees a picture of the right eye, or a picture of the left eye. But some people’ brains choose 2 pictures at once, and it turns out to be as if a structured image.

This feature is encountered in people engaged in creativity, open to communication and curious. Thanks to it, they recognize around them symbols and images that are invisible to ordinary people. You can train it by looking at, for example, a carpet or a cloud. 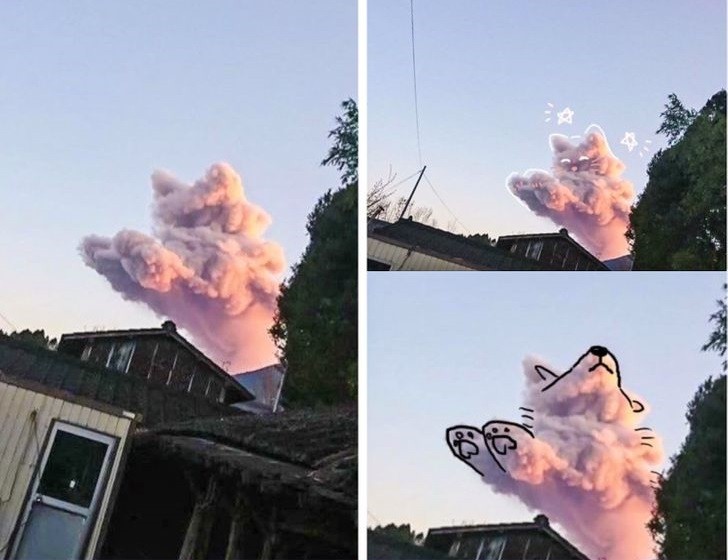 The human eye is not the only visual organ.

Some people see ultraviolet radiation: it happens when a lens is removed, it “filters” the UV radiation. For them, all people are covered with freckles, tonic and regular water – different colors, and birds, flowers and some mushrooms look brighter.

People recognize infrared radiation thanks to receptors on the skin, which perceives it as heat radiation. You notice this: blood flow speeds up, blood vessels expand, and sweating increases. Some scientists point out that the eye is able to see green light flashes when using an infrared laser – a fact that requires reconsideration of human vision.