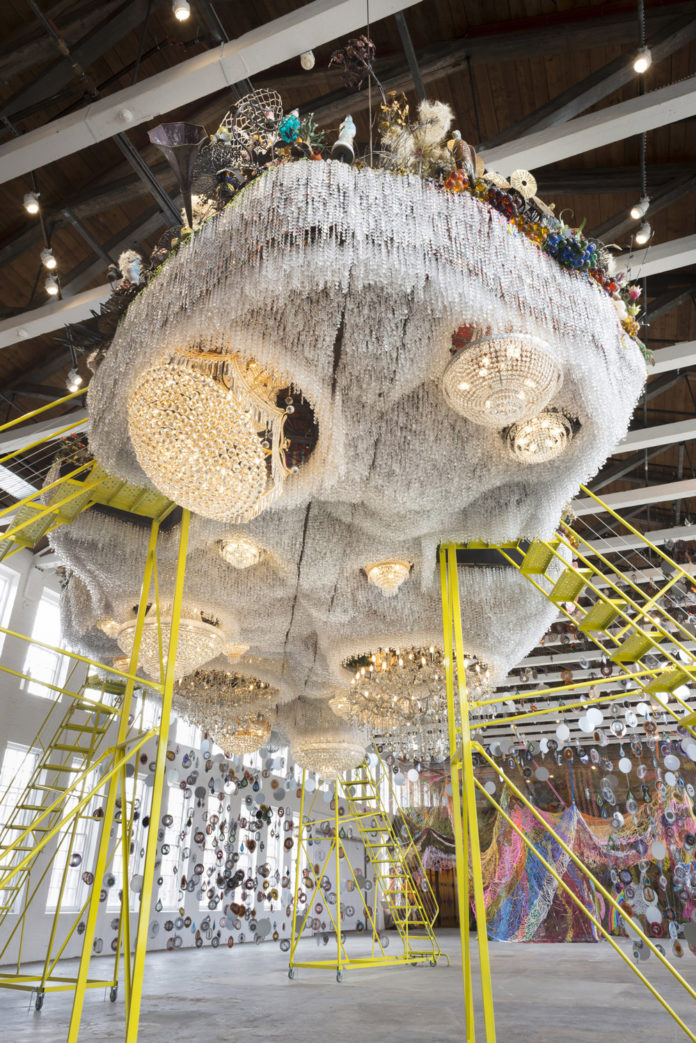 Composed from tens of thousands of metallic wind spinners, more than 10 miles of crystals, and thousands of other traditional lawn decorations is Nick Cave’s installation Until, a work which exists at two levels within the Massachusetts Museum of Contemporary Art’s (MASS MoCA) football field-sized exhibition space, Building 5. Illuminated chandeliers peek from within dense clouds of dangling crystals hung from the building’s rafters a story and a half above the floor. Several bright yellow ladders lead to the top of these glistening structures, showcasing crowded platforms that serve as home to dozens of ceramic birds, gilded pigs, colorful flora, and cast iron lawn jockeys.

Collecting the enormous supply of lawn ornaments and decorations for the exhibition was a collaboration between Cave and MASS MoCA. A team of several individuals scoured eBay, thrift stores, and other second hand shops to find previously used materials that would be perfect for the towering installation. The thousands of found objects create a textured experience, one viewing his cloud-like platforms through mirrored kinetic objects. Not all inclusions are intended to dazzle however, as scattered images of guns, bullets, and targets lay within the comforting imagery of opulence and kitsch. “Formally their [the metallic wind spinners’] reflective quality was important,” Cave shares with Colossal. “To have something that we can see ourselves within as well as something that becomes almost mirage-like. Conceptually, garden spinners are found in our own back yards, so using these everyday objects with images of guns, teardrops and bullets conveys the proliferation of this violence in and around the safety of our homes.” Cave, an artist best known for his elaborately produced Soundsuits, created the installation as a response to gun violence and policies and race relations in America. The title, Until, sits at the center of two phrases. The first, which lays at the heart of our judicial system, “innocent until proven guilty,” and the second phrase, which is seen to be more commonly practiced, “guilty until proven innocent.”

Cave hopes the exhibition serves a catalyst for these topics to be more readily discussed, as well as a space for change to be motivated. During the run of Until he invited several dancers, singers, poets, and composers to perform their own messages within the work, allowing the visual exhibition to double as a rotating stage.

“By inviting other artists and community members to make their own work within it, the installation becomes a platform for their work and their audiences,” said Cave. “Their particular of sharing their view on the subject may strike a different or more specific chord in some and as such the whole project becomes more effective and reaches more people. This is in service to all of our goals. I also learn from their works the role of my own work.” A nearly 200-page book centered around the exhibition, Nick Cave: Until which is published by Prestel, will be released on April 28 at MASS MoCA, featuring installation images as well as essays by MASS MoCA curator Denise Markonish, Talking Heads co-founder David Byrne, and Cave himself. It will also feature poetry centered around the justice system by Claudia Rankine and reflections by the head of the Police Board and Task Force on Police Accountability in Chicago, Lori Lightfoot.

The book is available for pre-order on MASS MoCA’s website and Amazon, and can be found in the museum later this month. There will be a book launch in NYC on April 26 at the New York Pubic Library and one atMASS MoCA on April 28. You can visit the monumental exhibition at MASS MoCA through August 2017. Untilwill then travel to Carriageworks in Sydney in 2018, and the Crystal Bridges Museum of American Art in Bentonville, AR in 2019.