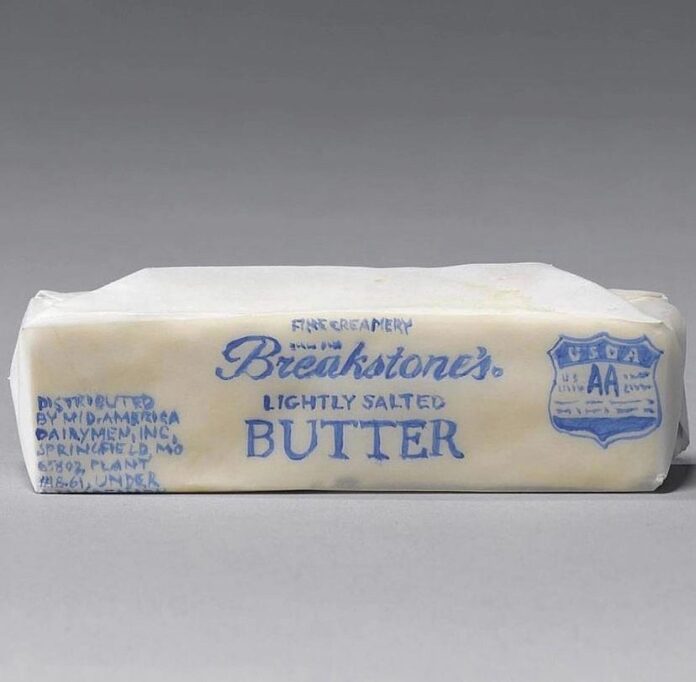 Butter. It’s a beloved ingredient found in households around the world—and it has frequently been the source of inspiration for artists. By some accounts, the history of butter dates back to 8000 B.C.E. in ancient Africa. Over the centuries, it has been used as a healing unguent, for cosmetic purposes, and, of course, for cooking and baking. High in fat, it adds flavor and richness to dishes, but in the artistic realm, it has taken on a symbolic and thematic life of its own. From sumptuous 19th-century still lifes to 21st-century performance art, butter has served as a key element for many artists’ work.

In time for Thanksgiving feasts, we’ve gathered seven examples of artworks that use or portray butter in celebration of the delicious dairy product. 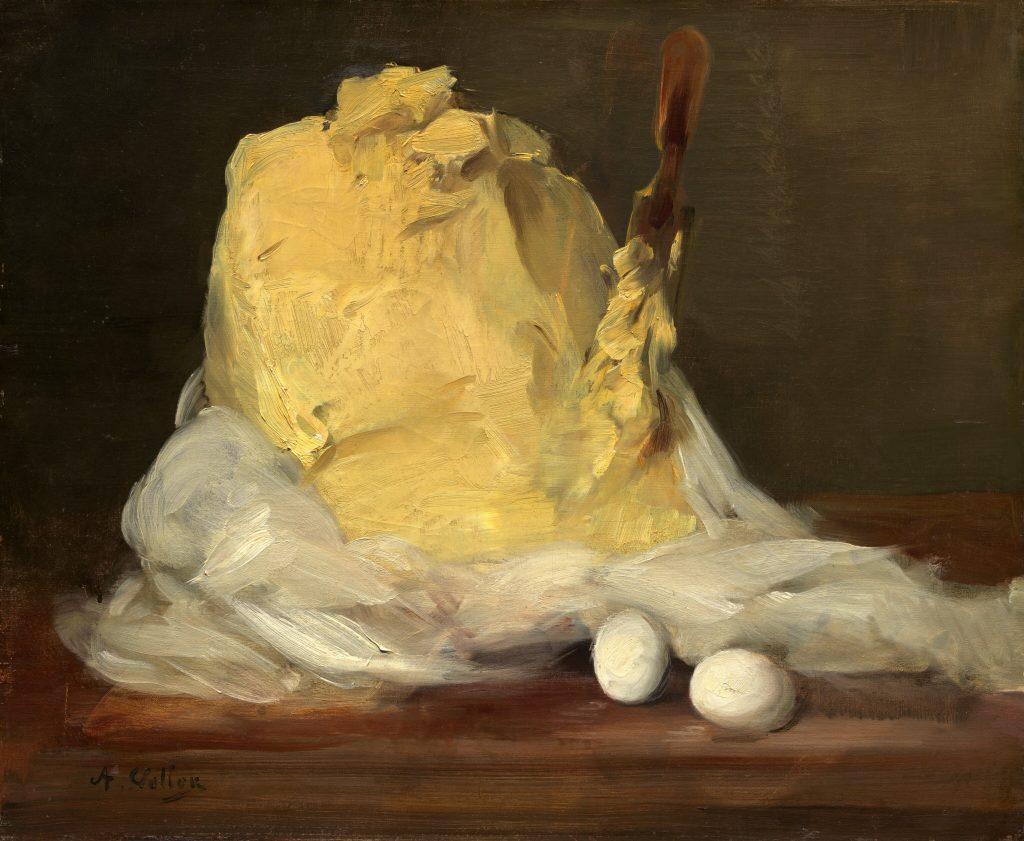 Antoine Vollon was a well-regarded French painter who garnered a reputation for his classic genre paintings, namely still lifes, landscapes, and figure paintings. A highlight of Vollon’s career is the appetizing (1875­–85), a still life that could also be considered a loving portrait of butter. The delectable, yellow-hued dairy product sits heaped with a clearly already used butter knife at the ready, as if waiting to be slathered on a piece of baguette. The accuracy with which the butter’s texture and color are portrayed have even led some reviewers to ponder if it had been painted with butter itself. 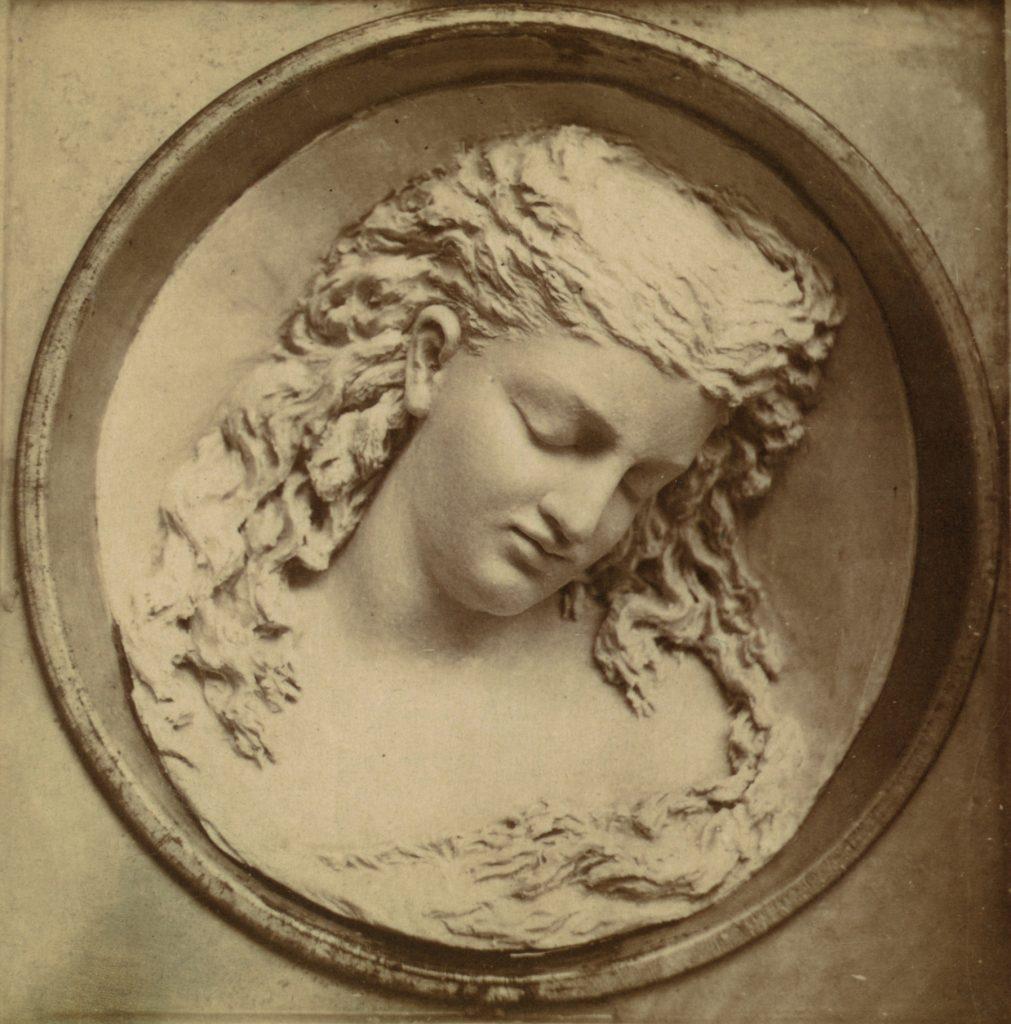 Commonly referred to as the “butter sculptress,” and recognized as the first American artist to use butter as a medium, Caroline Shawk Brooks began butter sculpting in 1867. Brooks created (1876), a high relief butter sculpture inspired by Henrik Hertz’s (1845) for display at the Centennial Exhibition in Philadelphia. A previous iteration of the sculpture done in bas relief was shown in Cincinnati, where it was viewed by more than 2,000 people and warmly reviewed in the . The Centennial Exhibition work received equal acclaim, and solidified Brooks’ standing as a serious artist. 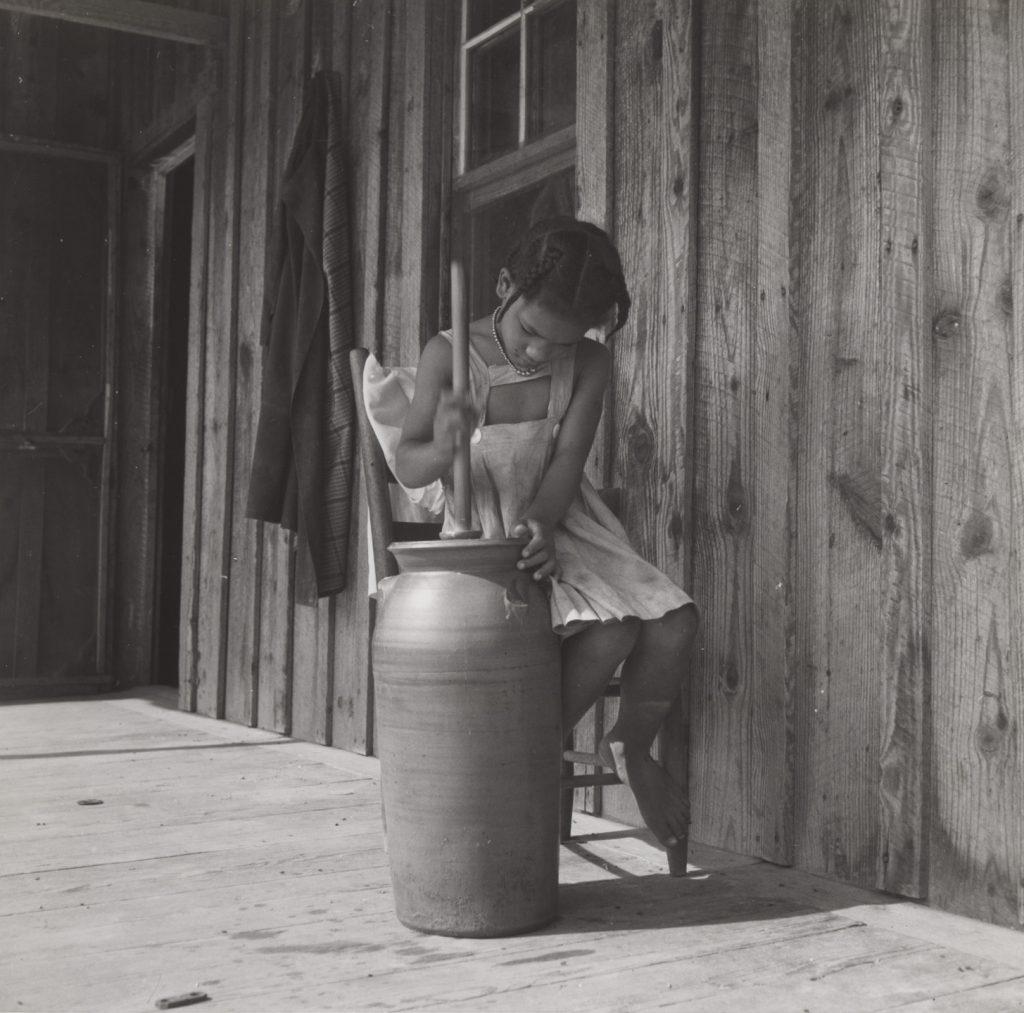 American photojournalist Dorothea Lange took photos in the hopes of effecting social change, and her most famous images emerged from her work with government agencies during the Great Depression. (1939) shows the daughter of a tenant farmer churning butter. Premade butter was a luxury for many at the time, and the device she is depicted using, a “dash churn,” was time-consuming and laborious, with it taking between 60 to 90 minutes to make butter. With butter being a common and necessary food stuff, the photo highlights the young girl’s labor over childlike play. 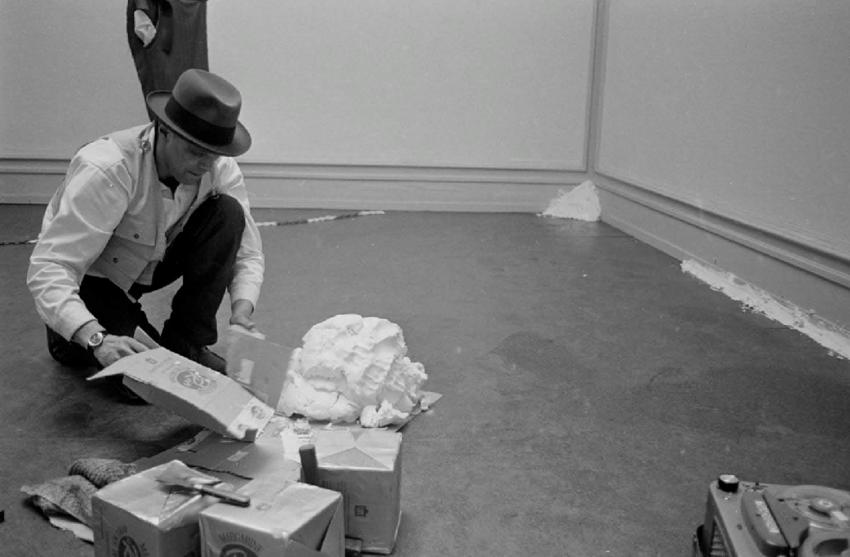 Though iterations of the work had been made as early as 1968, Beuys exhibited , or “Fat Corner,” at the Kunstahalle Bern in 1969. In the work, Beuys stuffed kilograms of butter in the corner and along the baseboards of a room, at once delineating and sealing his space within the show. The German artist was renowned for his personal artistic lexicon, a “Beuysian” language that frequently referenced his experiences in World War II. Of his recurrent use of high-fat substances, Beuys stated it “was to stimulate discussion… people instinctively feel it relates to inner processes and feelings.” 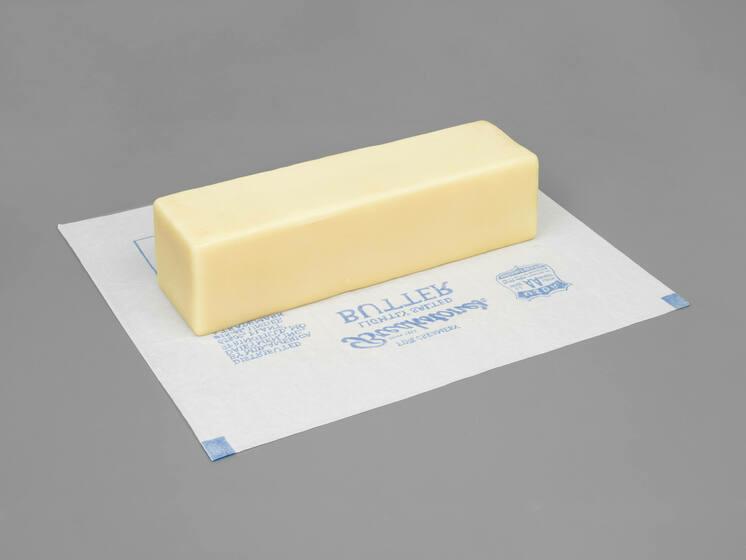 At first glance, Robert Gober’s untitled work appears like the average stick of butter, perhaps freshly unwrapped for cooking or baking. But its massive size (coming in at just under 48 inches in length) and pristineness lend this seemingly everyday food item an air of the uncanny. The sculptor, active since the 1970s, is known for his ability to take the familiar and transform it into something enigmatic and unsettling. As everyone knows, butter left out is prone to melting or marring, and the exposed butter stick conveys a sense of vulnerability, a theme that many critics have compared to the human condition. 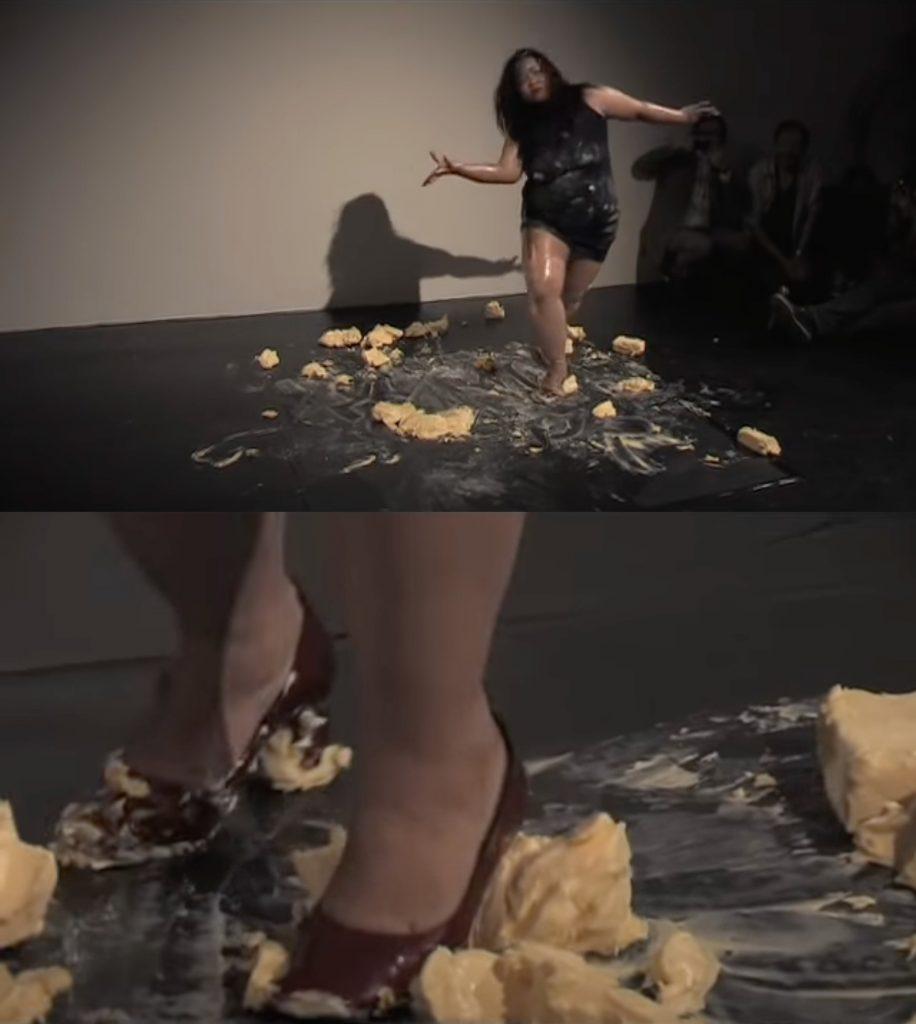 Indonesian durational performance artist Melati Suryodarmo first performed in 2000. Accompanied by ceremonial Indonesian drumming music, the work sees Suryodarmo, in high heels, dancing on 20 blocks of butter arranged on the floor. Over the course of the performance, the butter begins to melt and spread, causing her to continually slip and fall during the dance, while creating anticipation and empathetic unease for the audience as the stage becomes slicker. Subsequent performances have utilized different music, but in all the butter acts as a symbol of life’s travails, with Suryodarmo messaging the necessity of picking oneself up after every fall. 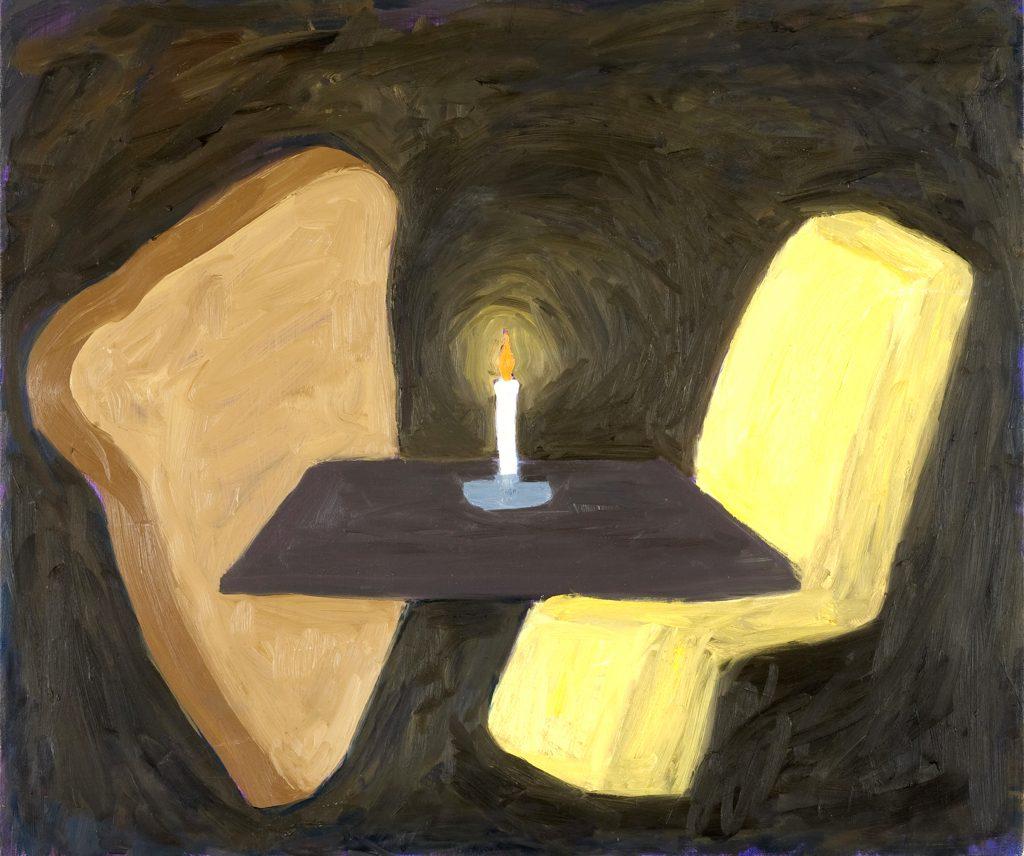 Milk and cookies, peanut butter and jelly—some foods are just made to go together. In Scott Reeder’s (2008), the natural pairing between bread and butter is turned into a romantic date. Whimsical and humorous, a stick of butter is shown seated across a slice of bread, near a flame that could potentially melt it (a metaphor for love, perhaps?). Reeder has used the iconic bread-and-butter duo as anthropomorphic figures in a number of his works, with the characters undertaking activities such as a beach day, dancing at a night club, and even looking at art in a gallery.