Home News ‘I Could Never Find the Right Place in Paris’: Jean Pigozzi on... 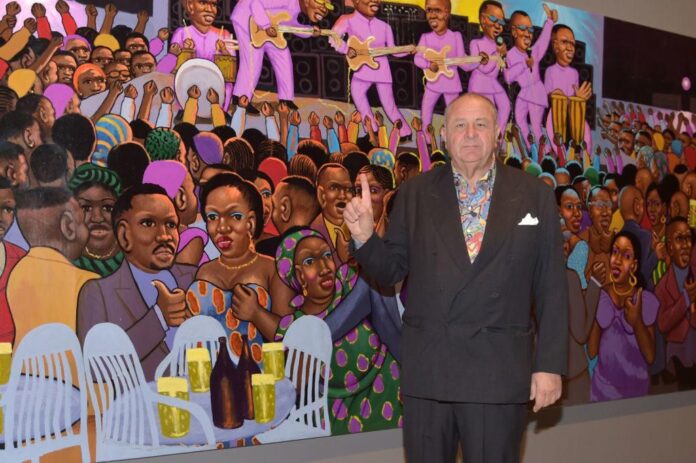 The vast contemporary African art collection of Jean Pigozzi will get a dedicated museum in Cannes in the south of France.

Although the museum isn’t scheduled to open before 2026, a preliminary exhibition featuring works from the collection is on view at the Gare Maritime in Cannes until August 21, and features more than 100 paintings, sculptures, and photographs created from the 1960s onward.

“Cannes is a small city but it has three million visitors annually because of the Cannes Film Festival and tourism,” Pigozzi, who has a villa in nearby Antibes, told Artnet News.

Pigozzi will donate several thousand contemporary African artworks to the Cannes municipality. In return, the deconsecrated Saint-Roch chapel, which has around 64,000 square feet of space, will be renovated to welcome his collection.

“David Lisnard, the mayor, showed me a few places and I liked the challenge of this charming church in the old part of Cannes,” the collector said. “I didn’t want somewhere too big. It won’t be static, every year there’ll be a different exhibition and I told the mayor that for the first five years I’ll be artistic director.”

Pigozzi wants the museum, which doesn’t yet have a name, to be flexible beyond exhibiting only contemporary African art.

“I don’t want to be in handcuffs,” he said. “I also collect [the American street photographer of crime scenes] Weegee, and one day I could do an exhibition of African photos alongside some by Weegee.”

Pigozzi originally planned to find a space in Paris and met with several French politicians a decade ago to discuss the possibility. “I could never find the right place in Paris,” he said. “I didn’t need something pompous or incredible, but near a metro station so that it would be easily accessible for the public.” The idea of Cannes occurred to him after meeting its mayor.

Born in Paris in 1952, Pigozzi, the son of car manufacturer Henri Pigozzi, is a photographer and entrepreneur worth €350 million, according to the French financial publication Challenges.

What sparked Pigozzi’s interest in African contemporary art was the exhibition “Magiciens de la Terre,” which brought together artists from all over the world to the Centre Pompidou in 1989. A section on African artists was curated by André Magnin, who had travelled to the continent several times.

“I had a coup de foudre [love at first sight] when I visited the exhibition,” Pigozzi recalled. “If you asked anybody back then what African art was, they’d say wooden masks and sculptures. Thirty years ago, nobody knew that there was a contemporary art scene in Africa. The pieces on show looked as if they could have been made in Brooklyn or Paris and that’s why I got very excited.”

Pigozzi asked the Centre Pompidou for Magnin’s contact details the day after the exhibition.

“A woman called me and asked me to meet somebody but she didn’t tell me who it was,” Magnin, now the owner of Magnin-A gallery, said. “I saw a big guy in front of me who said, ‘Congratulations, what are you going to do next?’ I said that I wanted to continue what I was doing [working with African artists] and he asked me to build a collection of African art for him. I constituted his collection from 1989 to 2009 by exploring the continent and meeting many artists, making extraordinary discoveries everywhere. At the beginning, there wasn’t the internet or Instagram. I organized more than 30 exhibitions with works from his collection around the world.”

Over two decades, Pigozzi prolifically collected works by African artists long before they became recognized by the global art establishment. “I said to André: ‘Let’s create a very important collection of contemporary African art,’” Pigozzi said. “For 20 years, we went up and down Sub-Saharan Africa and chose pieces together. Now my collection has hundreds of artists, more than 10,000 pieces, of which around 2,000 pieces are great. I hope it’s recognized as the best African art collection.”

Among the renowned artists in Pigozzi’s Contemporary African Art Collection (CAAC) are Chéri Samba, Frédéric Bruly Bouabré (whose work is currently the subject of a solo show at the Museum of Modern Art in New York), Bodys Isek Kingelez, Moké, Romuald Hazoumè, and the photographers Seydou Keïta, Malick Sidibé, and J. D. ‘Okhai Ojeikere, as well as rising talents such as Aboudia.

Pigozzi donated 45 works from the collection to MoMA in 2019 in a gift the museum described as “transformative.”

Alluding to how inexpensive some of the artworks were before the market for African contemporary art took off, Magnin said: “When I met Romuald Hazoumè 30 years ago, he proposed selling his masks to me for the equivalent of €150. I said ‘No,’ and increased the price. And we hugged like brothers.”

“It’s a completely different sensibility. Eventually more people will discover [my Japanese contemporary art collection] and I’ll look for a different venue [to exhibit it]. I’m keeping my eyes and ears open.”