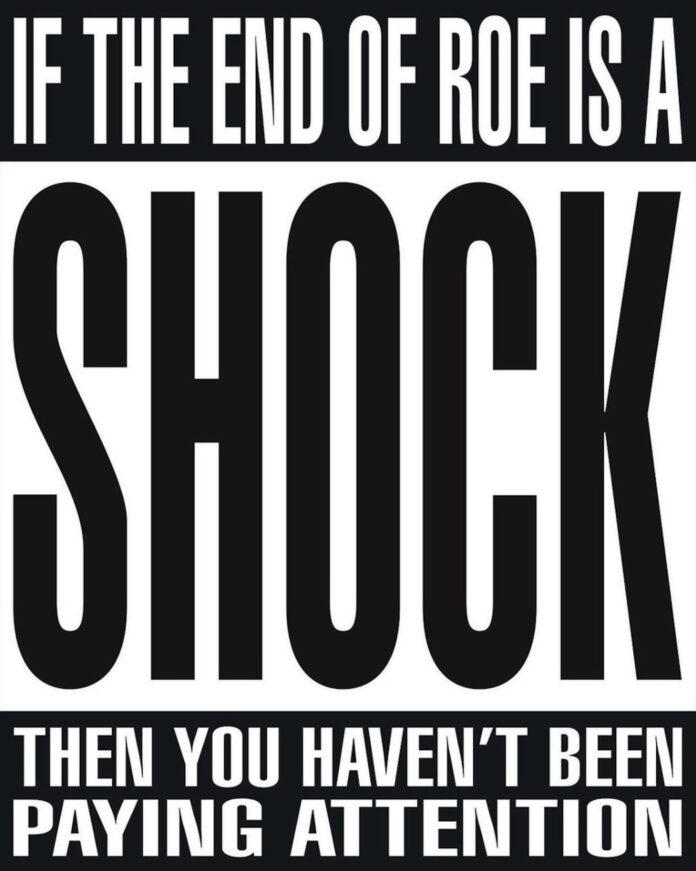 On Friday morning the US Supreme Court released its expected ruling overturning the landmark Roe v. Wade decision that had guaranteed the constitutional right to abortion for 49 years. Millions of people took to social media to voice their outrage, frustrations and fears; thousands planned to march in protest before day’s end. The ruling, foreshadowed by the historical leak last month of a position paper from Justice Samuel Alito,  will result in millions of people losing access to reprodutctive care including STI testing, access to contractptives, abortion and more. Many states have laws in place to go into effect immediately or in the coming weeks to shutter abortion clinics and criminalise the procedure.

Many in the art world were quick to react with anger and outrage. The New York-based gallery Sargent’s Daughters has been very active in posting about resources and information regarding abortion rights and last month even held an online auction, Daughter’s Defiant, which raised $15,000 that was donated to several grassroots abortion organisations including Keep Our Clinics and WRRAP.

“There is nowhere in the world where regulating reproductive choices has benefited women. Whether that’s Romania taking away access to abortion or birth control, or China insisting that people only have one child, there is no place ever where that has resulted in a better situation for women. It’s always worse,” says Allegra LaViola, owner and director of Sargent’s Daughters.

LaViola says people in the middle and South of the US who will suffer most from today’s ruling. “How do you help those people who need access to care who are the ones who have the least resources and the least places to go and the least money get information to help them get out of their state to get them to another state if they need it?” she says.

“This decision by the Supreme Court enacts a radical precedent to undo other civil rights previously considered law—specifically those related to contraception and LGBTQ rights,” says Theo Mauritz, director and owner of M23, another gallery on New York’s Lower East Side that has consistently used its platform to support social justice causes. “We will vote, and advocate for candidates who support the right to an abortion, as well as for the environment, gun control, LGBTQIA+ rights and voting rights for all Americans. As a gallery, we continue to defend the practice of artists reacting to societal topics, and share our world view.”

The artist and activist Marilyn Minter, who has been very outspoken in her political views, also weighed in on the Supreme Court ruling. “It’s hard to believe I’m now living in a world where young women have fewer rights than I did,” she says. “Republicans, we will see you in November.”

Conceptual artist Jenny Holtzer, who has made work about reproductive health and gender issues for years, launched an NFT (non-fungible token) auction on Foundation. Her NFT features a 2021 tweet by American Civil Liberties Union staffer Gillian Branstetter drawing a comparison between the text in a Tucker Carlson Tonight segment and the artist’s Truisms series. The text in the image from Tucker Carlson’s programme reads: “Making an informed choice about your own body shouldn’t be controversial.”

The longstanding feminist art space A.I.R. Gallery sent out a newsletter after the ruling that stated,“We advocate for safe and accessible abortion healthcare, which means free and easy access to medical professionals and care everywhere.” The newsletter contained a list of over 20 reproductive health organizations and groups to donate to including Black Feminists Fighting Abortion Bans and Advancing Reproductive Justice, Women’s Medical Fund, Rise Up 4 Abortion Rights and others.

Larger galleries, many of which did not make public statements last month regarding the leaked document, seemed to change course today. David Zwirner released a statement alongside an image from the artist Barbara Kruger on Instagram featuring a piece she created for the New York Times opinion section last month. “The end of Roe is the result of the Republicans’ relentless campaign to restrict reproductive rights and control women’s bodies,” Kruger said in a statement. “Many of the Democrats have been incapable of responding forcefully, and only recently has the left begun to understand that the contestations around gender, race and class have to be engaged simultaneously and not siloed into rigid hierarchies of concern. This lack of compelling rhetoric and the inability to vote and think strategically has tragically informed the make-up of the current Supreme Court.”⁣

While many are still processing the magnitude of today’s ruling and its implications, LaViola underlines the need to organise and act now more than ever. “A lot of these on-the-ground clinics don’t have the kind of megaphone that Planned Parenthood does,” she says. “They need help and support, immediate action and donations to help clinics in places where the trigger laws have gone into effect.”

In New York, thousands are expected at a series of protests on Friday night.