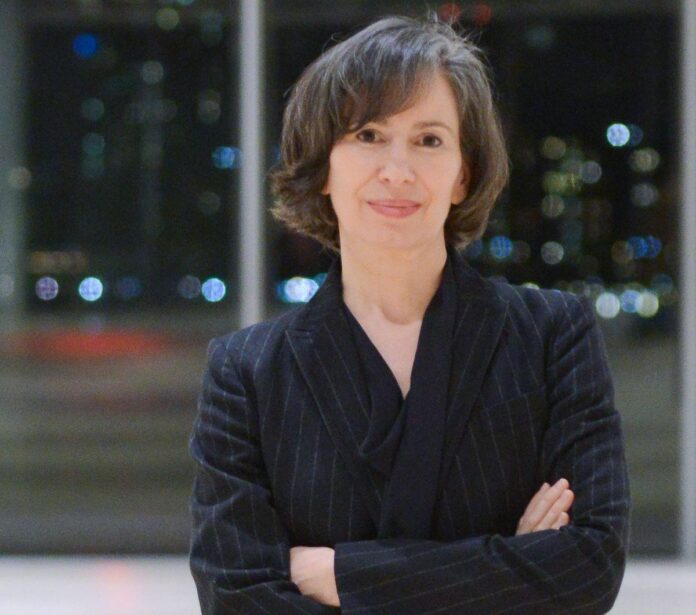 The US artist Andrea Fraser—a pioneer of the conceptual art movement known as institutional critique, in which the structures of cultural organisations such as art museums and markets are addressed in typically provocative fashion—is now represented by Marian Goodman gallery.

The announcement is notable considering that Fraser, whose work spans performance, as well as film and non-fiction texts, has regularly voiced her disapproval of many aspects of the art industry, and long-attempted to distance herself from it, even while commenting on her inability to do so. She is the latest in a string of mid to late-career women artists with socially conscious practices to sign to major commercial galleries.

Fraser has been practising since the mid 1980s. One of her earliest works took place at the Philadelphia Museum of Art in 1989, where she played the role of a tour guide, offering a satirical and exaggerated version of a docent’s talk that broached the relationship between institutions and philanthropists. In Little Frank and His Carp (2001), Fraser gyrated half-naked on the walls of the then-newly opened Guggenheim Bilbao, designed by Frank Gehry, to lampoon the industry fetishisation of starchitects. Controversial works of Fraser’s included Untitled (2003), for which she filmed herself having sex with a collector.

One of her most influential and widely known pieces is an essay submitted to the 2012 Whitney Biennial, in which she detailed through an essay the political leanings and financial investments of various board members of the Whitney Museum. The work would prove prescient some years later when the museum’s vice president Warren Kanders was forced to step down in 2019 due to his investment in a company that supplies tear gas used at the US-Mexico border. In 2016, Fraser returned to the Whitney to stage Down the River, in which she emptied the galleries of the museum’s fifth floor except for the sounds of various prisons and other correctional facilities.

She has received a number of institutional solo shows throughout her career, including at the Barcelona Museum of Contemporary Art (MACBA) and the Museum der Moderne Salzburg. She has also written several books and other long form texts: in 2005, a collection of her writings on Minimalism and museum architecture was published by MIT Anthology Press; in 2018 she released the book Museums, Money, and Politics. She is a professor at the University of California Los Angeles (UCLA).

Marian Goodman is the first US gallery to represent Fraser since the late 2000s; she was previously represented by Petzel gallery (then known as Friedrich Petzel gallery) for some years in the early- to mid-2000s. She continues to be represented by the Cologne gallery Nagel Draxler, with which she has staged five shows since 1990, around when she first signed.

“I’ve looked to Marian Goodman gallery for decades as one of the chief guardians of time-based and conceptual art,” Fraser says in a statement. “It will be an honour to show alongside so many of my artistic heroes.” Among the artists on Marian Goodman’s roster that work in performance, and time-based mediums are Pierre Huyghe, Tacita Dean and Yang Fudong. The gallery maintains locations in New York and Paris and a project space with intermittent programming in London; a space in Los Angeles is planned to open next year.

“Andrea Fraser is one of the most prominent protagonists of a critical practice that enables us to think about art and sociopolitical relations in a broader way,” the gallery’s president Philip Kaiser says in a statement.