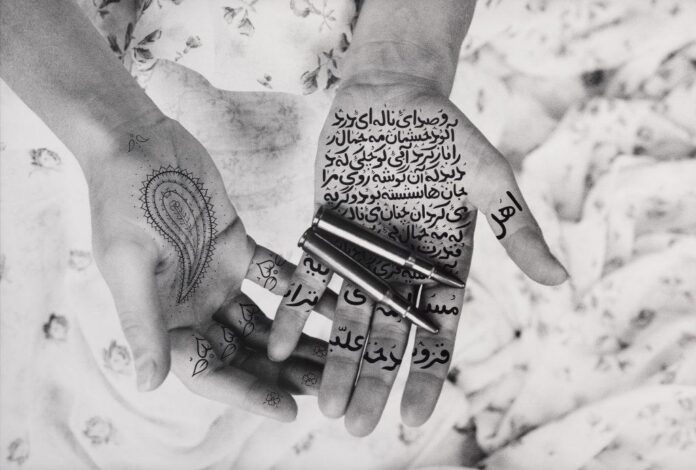 Hadis Najafi, a 20-year-old Iranian, removed her black hijab and tied her blond hair into a ponytail as she participated in protests that have rocked the Middle Eastern nation since 22-year-old Mahsa Amini died in police custody on September 16. Amini had been arrested by Iran’s morality police under accusations of violating the country’s obligatory hijab mandate.

The video of Najafi, defiantly pulling back her hair as she faced the same police that killed Amini, was shared by thousands on social media—it is part of a wave of images and films of women cutting their hair off in public, removing their veils, and burning them, fed up with the Iranian regime’s violent tactics and repressive policies towards women.

Najafi died a few days later from six bullets. With a government-imposed Internet blackout (the U.S. has taken steps to help Iranian people access information online) to quell the unrest, the death count, which is officially listed at 41, is thought to be higher, as are instances of injuries and missing persons. 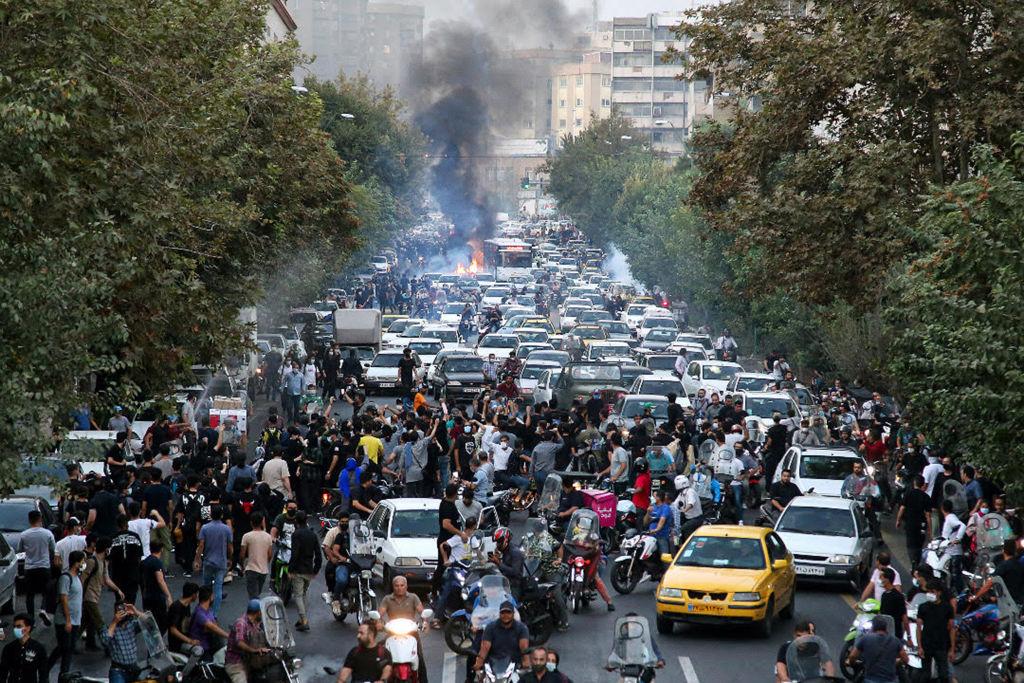 Tehran, Iran. Dozens of people stage a demonstration to protest the death of a 22-year-old woman under custody in Tehran Iran on September 21, 2022. Photo: Stringer/Anadolu Agency via Getty Images.

Members from the Iranian art scene, long known for its vibrancy and ongoing defiance despite 43 years of facing repressive tactics of Iran’s Islamic regime, are also taking to the streets in Iran and around the world.

“This is no longer just an intellectual movement but engaging the heart of Iranian society—everyone is protesting from all backgrounds, classes, and religions and non-beliefs are protesting together,” Tehran-based artist Behrang Samadzadegan told Artnet News. He said artists are no longer showing up to their own exhibitions, to class at art schools, or to events—they are instead heading demonstrations.

Samadzadegan stressed that the protests are about standing up to what he called a “maximum degree of repression inflicted on all people.”

The protests, which are in their 11th consecutive day, are “not just about hijab and women’s rights, but about all of our social rights and the basic human rights that we need to live as a people,” according to Samadzadegan. “It is about corruption, mismanagement of our country, and the economy. It’s about fathers and mothers who are ashamed because they cannot provide for their children.”

An Art Scene in Solidarity

Due to a rolling internet blackout, which has seen blanket block of major social media channels, it was challenging to reach artists, gallerists, and other art professionals for this story. But the support for the protests is strong. “Thousands of artists have shown their support since [Amini’s death] through posts and stories on Instagram, which is the preferred social media for arts here,” said one source.

“All the galleries and art institutions are closed in Tehran, most in solidarity with the protesters,” said one Tehran-based artist on condition of anonymity. “Events have been cancelled as have art classes. Everyone is at the protests.”

Another prominent dealer, who prefers to remain anonymous for safety reasons, said her gallery, located in the center of Tehran, was being used as a “safe haven” for people “running away or running towards the protests.”

“We remain open, but will not do new shows and will halt our program in solidarity with our people and protest of the barbarism we are witnessing in the streets,” she said.

When news broke of Amini’s death, “everybody was in shock,” Tehran-based artist Tarlan Rafiee told Artnet News. “We couldn’t believe this happened to this beautiful young girl, who was a guest in our city, Tehran. It was a shock and we couldn’t even think of what happened to her. It was women from her generation, in their early 20s and teenagers who woke us up! It was a slap from them to wake us up!” 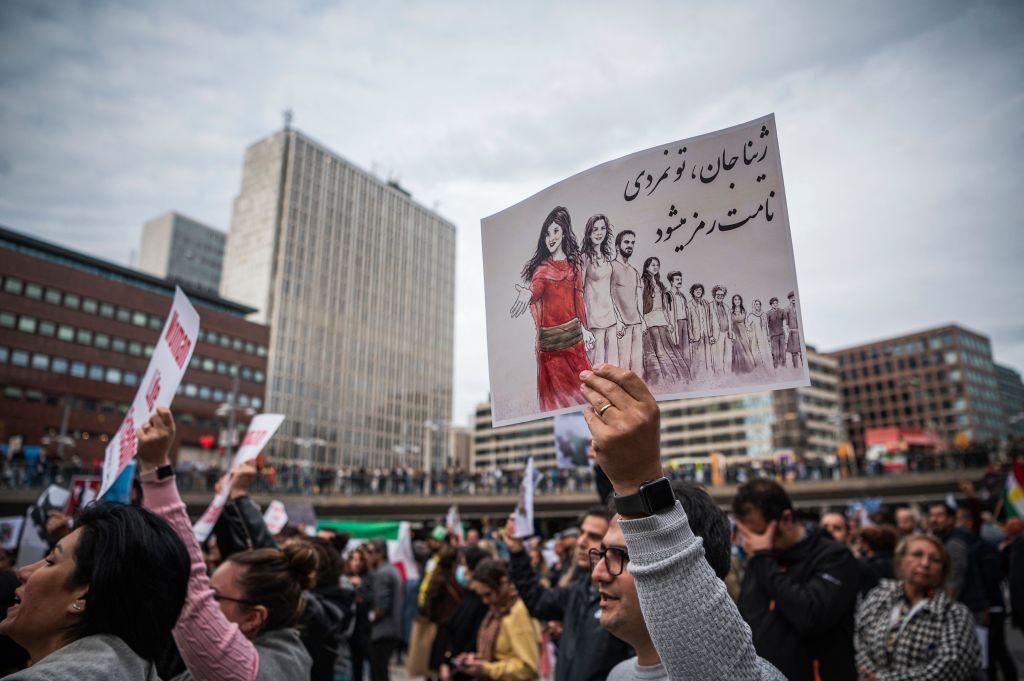 A day after her death, seven associations of Iranian artists have issued a joint condemnation of her attack.

There have been numerous protests against the regime in the wake of the 1979 Revolution, but most Iranians agree that the current demonstrations are among the largest in recent years. “People have no fear; they are desperate for change, and they will die for change,” said another Iranian artist who did not want to reveal their name, like others, for fear of safety.

Amini’s death has triggered protests over a list of grievances, including corruption, political repression, and socio-economic concerns stemming in part from tough living conditions brought on by U.S.-led sanctions. Iran was plunged further into economic trouble when President Trump took office and abandoned the Iranian nuclear deal.

Those witnessing the protests and government pushback over social media while abroad are just as horrified. “Watching these heart-wrenching scenes on social media, as an artist, an ordinary human, and an Iranian patriot, I cannot but think of the pain of parents losing loved ones on a daily basis,” Maryam Eisler, a London-based photographer of Iranian origin told Artnet News. “Where politics often fails, art may win, opening hearts and minds to critical dialogue and new perspectives. There is no better time than to test art’s soft power.”

Prominent Iranian artists such as Shirin Neshat whose work has long focused on women’s rights echoed sentiments felt by the Iranian diaspora. “I feel a mix of excitement and fear,” the artist told Artnet News. “These protests are unprecedented in Iranian history and I believe it could lead to change, and yet the government is using every possible way to suppress this movement through violence and aggression. We are all on the edge. But if this movement continues there could be a moment of unity for all people who live inside and outside Iran.” 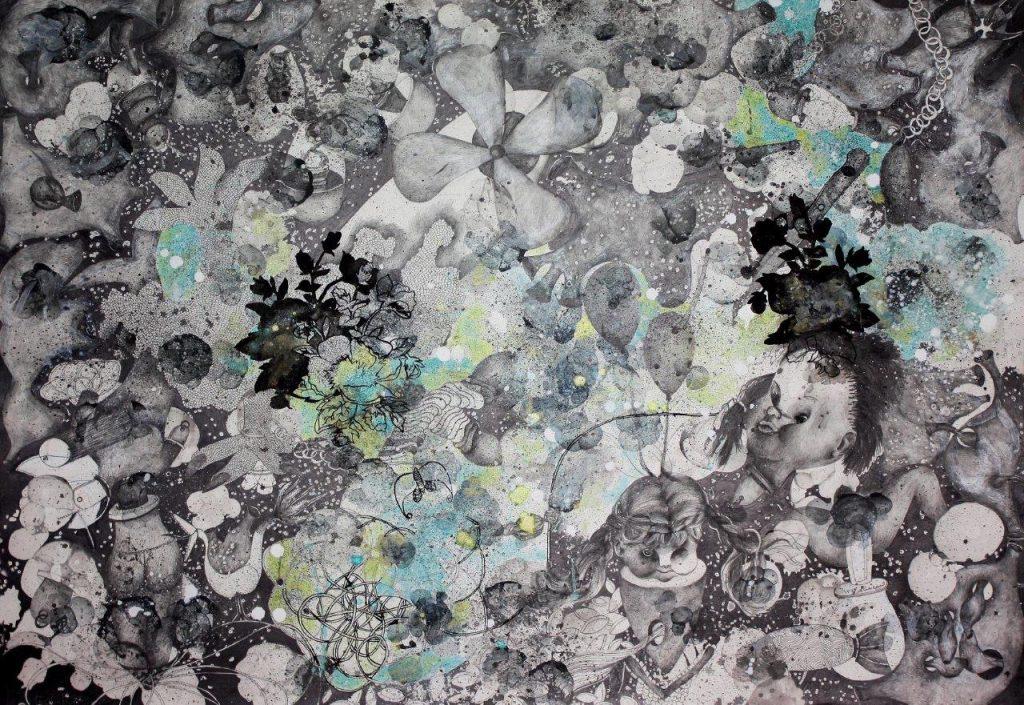 A Protest for Women Everywhere

On Monday, September 26, Kurdish artist and journalist Zehra Doğan staged an action outside of the Iranian consulate in Berlin, Germany, She used henna, hair, and menstrual blood in her performance to show her support of women protesting in Iran and Rojhilat (Amini was half Kurdish). Doğan and Ulaş Yunus Tosun, the journalist who was filming the artistic stunt, were taken into custody by the German police and were released on the same day.

As several female artists have noted, there is an aspect to these protests and their global spread that goes beyond anger over the obligatory veil and the repressive tactics of Iran’s morality police.

“When I first saw videos of women chopping their hair off in cities across Iran, dancing around bonfires, angry but alive and jubilant in an ecstatic way, it gave me chills all over,” Iranian-American, New York-based artist Afruz Amighi told Artnet News. “It is one thing to tear off your chador in defiance, but another thing to remove the thing it is supposed to hide. There is so much in this act, so much depth and feeling in this gesture. It transcends Iran, transcends Islam.”

Amighi hasn’t been back to Iran since 2012, a time when “reformers were in power and social control vis-a-vis women was fairly lax,” she said. “But things have changed.”

Tehran-based artist Negar Farajiani, who was traveling to Los Angeles for her solo show “Behind the Curtain (Passé-Pardé)” at Hamzianpour & Kia when Amini died, noted how the protests resonate with a cry for women’s rights worldwide.

“My work is related to my experience as a woman living in Iran and it is not easy, but I think it is not easy being a woman anywhere in the world nowadays,” Farajiani told Artnet News. “But being a woman is a part of my life and my work as an artist. Everything happening in Iran now and before has influenced my work.”

Amighi noted that there are repressive policies over abortion in Europe and the United States that should also be thought of in relation to the protests in Iran. “Politicians have been circling around women for the past decade, trying to reassert their control,” she said. “What Mahsa Amini did, and all others are now doing in her wake is not just to stand up to the Islamic regime, but to stand up to a worldview that women need to be controlled. The people who are standing up in Iran are closest to the knives, and they are fighting for all of us.”