Home News Is the graphic designer who refuses to create websites for same-sex couples... 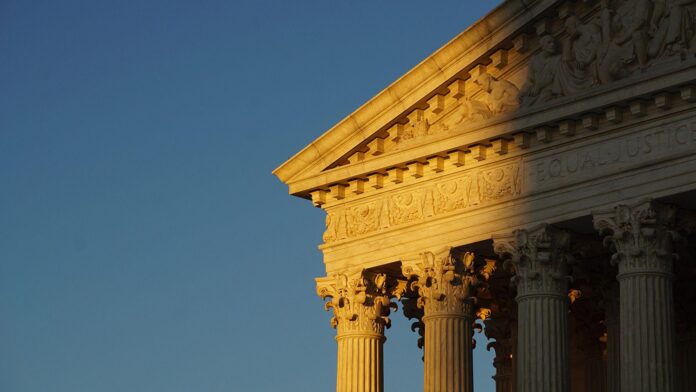 Lawyers for the Colorado graphic designer Lorie Smith have argued before the US Supreme Court that her refusal to create a website for a same-sex wedding was based on her religious beliefs and on her being an artist with the right of free speech. Being compelled to produce this website by a state law prohibiting discrimination on the basis of sexual orientation, her lawyers claimed, violates her free speech rights. If she is an artist, then any website she creates arguably could be deemed a work of art.

During the hearing on 5 December last year, justices pondered whether there are differences between artists who are conveying a message, and vendors selling goods and services in the marketplace. “The case comes down to a fairly narrow question of, how do you characterise website designers?” Justice Brett Kavanaugh asked. “Are they more like the restaurants and the jewellers and the tailors, or are they more like the publishing houses and the other free-speech analogues that are raised on the other side?”

Others in the legal community were likewise at pains to solve this riddle. “Can designers call themselves artists? Yes, but if they are creating something functional, such as a website, then you have a problem because that goes beyond an aesthetic manifestation,” says Michael McCullough, a partner in the New York firm Pearlstein & McCullough. “Once it has function, then it gets tricky.”

Rebecca Tushnet, a professor of first amendment law at Harvard Law School, says judges of cases like this will need to determine if “a putative speaker’s intent [is] to express an idea, and [the] intelligibility to an audience that an idea is being expressed”, which would clearly establish that person as an artist rather than a service provider.

Artists may register works with the US Copyright Office, but copyright law does not decide who is an artist or what is art, only if the submitted image qualifies as original, says James L. Silverberg, founder of the Washington, DC-based Intellectual Property Group. Registration by the Copyright Office is determined on a case-by-case basis.

“There are works of graphic design that are clearly copyrightable because they contain the requisite level of originality,” Silverberg says. “And similarly, in contrast, there are graphic design works that do not qualify, including most typeface designs and simple layouts.” By this standard, Smith is fully within her rights to view herself as an artist, but whether her work would qualify as original art is unclear.

Definitions are difficult to find. Sergio Muñoz Sarmiento, an art lawyer in New York, claims that “since the 1960s, the notion of ‘artist’ has been expanded to the point of swallowing the rule—that is, if everyone is an artist, then no one is an artist”. He adds that “passing out clean needles and handing food to the homeless is now considered ‘artistic’ within the realm of contemporary art. Interestingly, this laissez-faire practice is part of the reason as to why a web designer or wedding cake designer can argue that they are ‘artists’.”

In terms of the website designer Lorie Smith, however, Tushnet did not expect that “the court will see this primarily through an artistic lens. I suspect [any ruling] will be focused on the cultural role of LGBT rights.”

What may be easier to determine is who is definitively not an artist. A monkey cannot be an artist, at least to the degree that a macaque or gibbon might create something that is worthy of copyright protection. That was decided by a district court in 2016 and affirmed on appeal two years later after the animal rights organisation People for the Ethical Treatment of Animals (Peta) sued the photographer David John Slater for including in a book that he published some selfies taken by a seven-year-old monkey named Naruto. Peta claimed that Slater’s publication and sale of those photographs violated the monkey’s copyright, but the appellate court ruled that “this monkey—and all animals, since they are not human—lacks statutory standing under the Copyright Act”.

Artificial intelligence (AI) also cannot be an artist deserving of copyright protection, according to the Copyright Office. In February 2022 it ruled against Stephen Thaler, a scientist and developer of a computer system built to simulate, or act like, the human brain, and referred to as a “neural network”. Thaler had sought in 2018 to register with the Copyright Office a painting-like image produced by the computer through an algorithm he had devised. The Copyright Office rejected the initial application and, after Thaler had requested a reconsideration of its decision, ruled earlier this year that the image “lacked the required human authorship” required to receive copyright protection.

A 1990 amendment to the US Copyright Act, the Visual Artists Rights Act (Vara), also would not cover AI-generated art, since that law was designed to protect (human) artists’ reputations when their works are intentionally damaged or destroyed. A computer, New York-based art lawyer Megan E. Noh points out, does not “have a reputation”.

A Supreme Court decision in the Lorie Smith case is expected by July.

The Massive ‘Domino Sugar’ Sign Lights Up the Williamsburg Skyline Once Again, Marking Progress in the Landmark’s Transformation