Home News Is This an Early Rembrandt? A Collector and Art Sleuth Believes He... 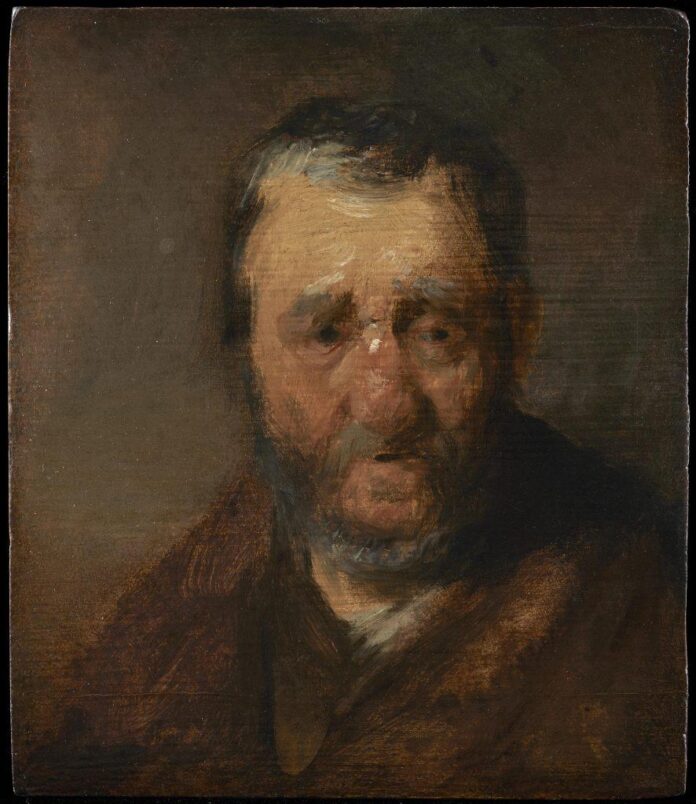 When Old Masters specialists Agnews returns to Master Drawings New York next month, the London gallery will be bringing what it believes to be a long-lost painting by Rembrandt van Rijn. Missing since 1935, the work has taken a remarkable journey around the world, escaping the Nazis and narrowly avoiding incineration in a California wildfire.

When it went up for auction at Weschler’s Auctioneers and Appraisers in Rockville, Maryland, in September 2021, the wood panel painting carried a high estimate of just $1,500. Clifford Schorer, Agnews’s co-owner, had a feeling the artwork, consigned by a New York monastery, was worth a heck of a lot more.

So did other so-called “sleeper hunters”—collectors and dealers who closely monitor auction and estate sales looking for overlooked masterpieces. When Schorer dialed in to bid by phone for the work, which was listed as being in the “manner of Rembrandt,” a technical mishap meant he almost missed his chance to bid. By the time he entered the fray, the work was already at an already-impressive $37,500.

With multiple bidders all clearly hoping this was the work of the Dutch Golden Age master, the battle soared to $225,000, with Schorer finally prevailing for $288,000 including fees. 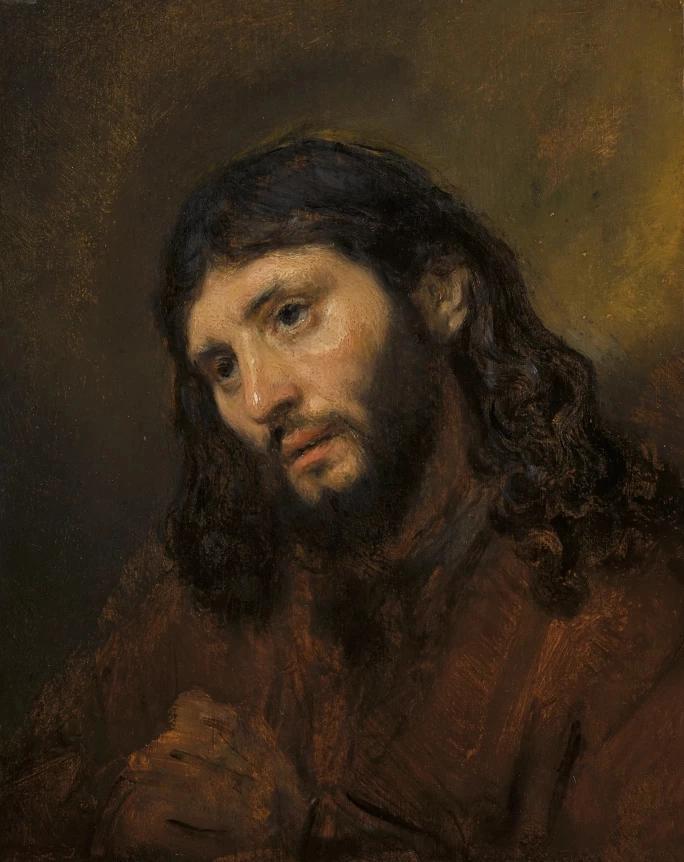 Now, the diminutive panel is on the verge of being accepted as an early Rembrandt masterpiece—the latest discovery by the high school dropout. Schorer went on to start and run several successful businesses, which he used to fund his art-collecting hobby. A former board president of the Worcester Museum of Art, he’s also been a shareholder at Agnews since 2014, keeping the gallery, then on the verge of closing, in business with an 11th-hour investment.

At last year’s Master Drawings, the gallery brought a rare original Albrecht Dürer drawing, also spotted by Schorer, that had been purchased by a Massachusetts man for a mere $30. And he also recently tracked down a Hendrick Avercamp painting stolen in 1978 that he hopes will soon be returned to the Worcester museum, thanks to a print-on-demand throw pillow featuring the lost canvas.

The newly discovered painting won’t be for sale during this year’s event as the authentication hasn’t been finalized, so there’s no price tag yet. But one possible comparable is Rembrandt’s , which sold for £9.5 million ($12 million) at Sotheby’s London in 2018.

“There have been a number of small head studies, but that market is quite small,” Schorer said. “There was a wonderful religious history painting that came up last year and sold for $20 million, but this is not in that category. This is really early work by the master, and I think it is important to understanding his early career.” 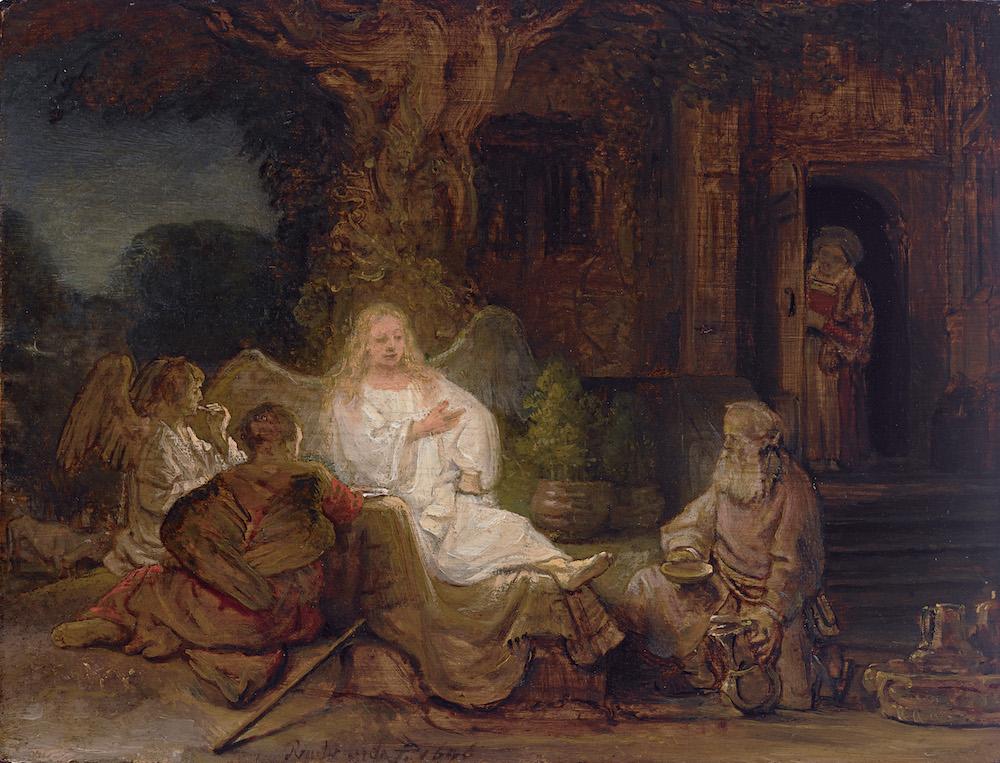 Since purchasing the work, Agnews has tasked four scholars with writing essays detailing everything they know about the painting, which appears to be the Rembrandt head study known Bredius 262. That’s the number scholar Abraham Bredius assigned it in his 1935 catalogue raisonné of the artist’s work.

Schorer has developed a routine for tracking down works at auction, hiring “runners” in both Europe and the U.S. to scour listings for potential gems and share them in a WhatsApp chat. He also has bots at his disposal, with keyword searches that run automatically every day.

“We get these email alerts, today Raphael has appeared in nine different auctions, and here are the lots that say that word ‘Raphael,’” Schorer said. “Of course, all nine of those are not Raphaels—usually, none of them are. But that’s the daily ritual.”

Most of the time, it’s easy to dismiss the results, but sometimes things require a second look. The “manner of Rembrandt” fell into that category. After Schorer made the match to Bredius 262, the next step was to see if there were any documented copies floating around. There weren’t.

Then he got a high-resolution photograph of the painting from Weschler’s, which revealed a horizontal crack along the bottom of the painting, along the grain of the wood. The same crack was visible in a 1906 photo of the lost Rembrandt, convincing Schorer that this was, in fact, the same piece.

“It has to be the same picture,” Schorer said. “In the 1906 photograph, that crack is just exactly the way it is today.” 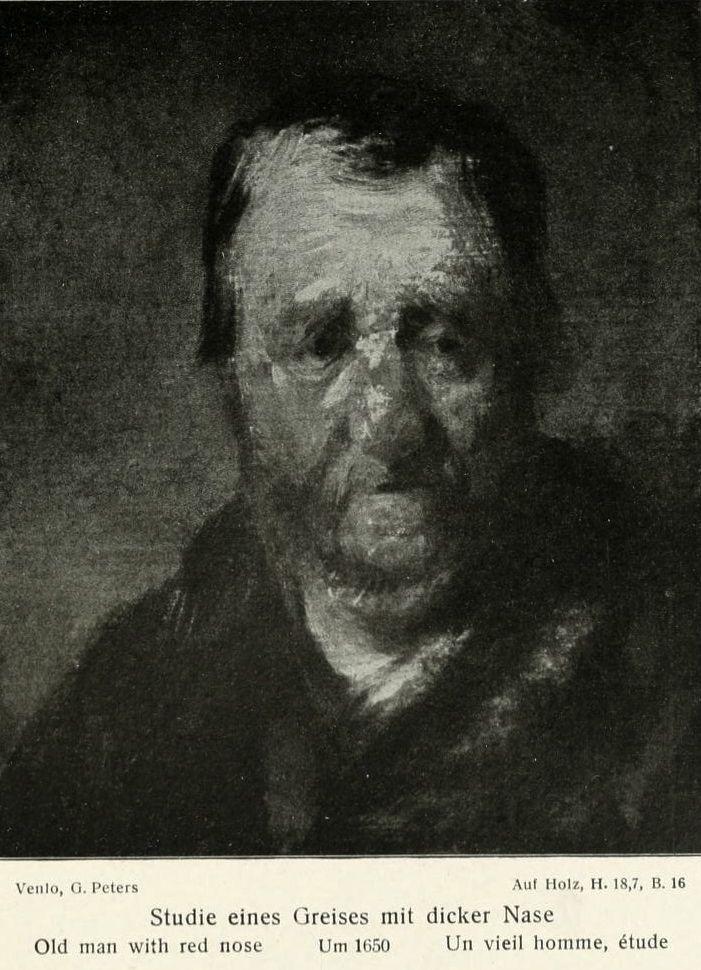 As word of the way-over-estimate auction result spread among experts in Dutch Golden Age art, Stephanie Dickey, co-curator of an about-to-open Rembrandt show at the Städel Museum in Frankfurt, Germany, had a sudden realization. Having just seen the photos from the Maryland sale, she recognized that the old man was a dead ringer for King Saul in Rembrandt’s , suggesting it was a study for the larger painting.

Further examination of Rembrandt’s oeuvre suggests that the artist used the same study as a reference for a number of his paintings.

But even after winning the auction and making the connection to the larger painting, there were still multiple hurdles to overcome to definitively identify it as the work by the master.

In his 1968 Rembrandt catalogue raisonné, Horst Gerson had downgraded the painting to a follower of the artist—albeit without having seen the work in person. Schorer thinks he understands why Gerson didn’t feel comfortable with a favorable attribution. 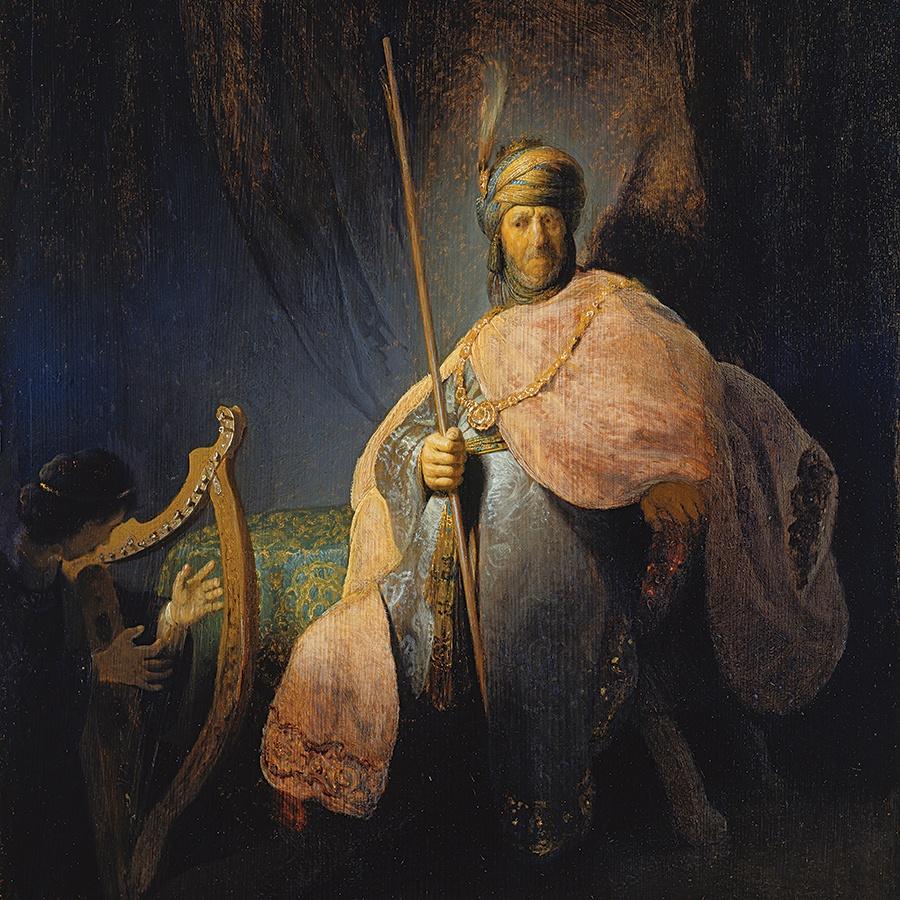 “With Rembrandt’s very early Leiden period oil sketches and head studies, so few of them are actually autograph. So many of them are done by pupils and followers that it’s tough to judge the few that appear,” he said. “Rembrandt reutilized a lot of these panels and painted over these early studies. There isn’t a lot to judge by.”

If Gerson was right, Schorer had significantly overspent—a risk of sleeper hunting.

“It’s quite funny,” he admitted. “Sometimes we pay more than the pictures are worth, because we’re so excited and we’re bidding only against each other, the people who think we’ve made a discovery that no one else has found!”

Even more troubling than the 1968 ruling, however, was the possibility that the painting was Nazi loot. If so, Schorer would have to hand it over to the heirs of the original owner, who he had identified as Josef Block, a German Jewish artist who survived the Holocaust and whose grandson had sought the restitution of his grandfather’s artwork in other cases.

Here, however, the 1968 catalog provided an important clue, stating that the painting had sold at Parke-Bernet auction house in New York in 1947. Sotheby’s had purchased the company, and was able to dig up the records for Schorer. The piece had sold for $2,500, and the consigner was Jewish art historian Numa Trivas, a curator at the Crocker Art Museum in Sacramento.

The museum’s archives told the rest of the story. Trivas had fled Europe in 1939, catching the last boat from the Netherlands to the U.S. before the invasion of the Nazis. He brought with him a crate of 30 paintings, smuggling them on behalf of their Jewish owners with a plan to sell them once the Nazis were out of power. Before Trivas died in 1942, he made the necessary arrangements to be sure to do right by the artworks’ owners.

“Numas Trivas is probably the most honest man I’ve ever seen. He clearly knew he was dying and left handwritten instructions for all 30 paintings,” Schorer said. “It’s a very happy story. It’s one of the very few stories like that. I’ve never seen anything like it.”

Trivas’s instructions were still in the Crocker’s archives. The proceeds for the Rembrandt head, Trivas said, were to go to Block’s daughter, Anna Louise Jones, minus the commission to his estate. The buyers were Clark Hartwell, a World War II aerospace engineer turned chairman and president of Velcro Companies, and his wife Nina.

The Hartwells, in turn, gifted the painting to their church. The Benedictine Anglican monks of the Mount Calvary Monastery and Retreat House in Montecito, California, hung it for years near the fireplace. Then, in 2008, disaster struck, when the monastery, part of the Order of the Holy Cross, burned to the ground during the Tea Fire. 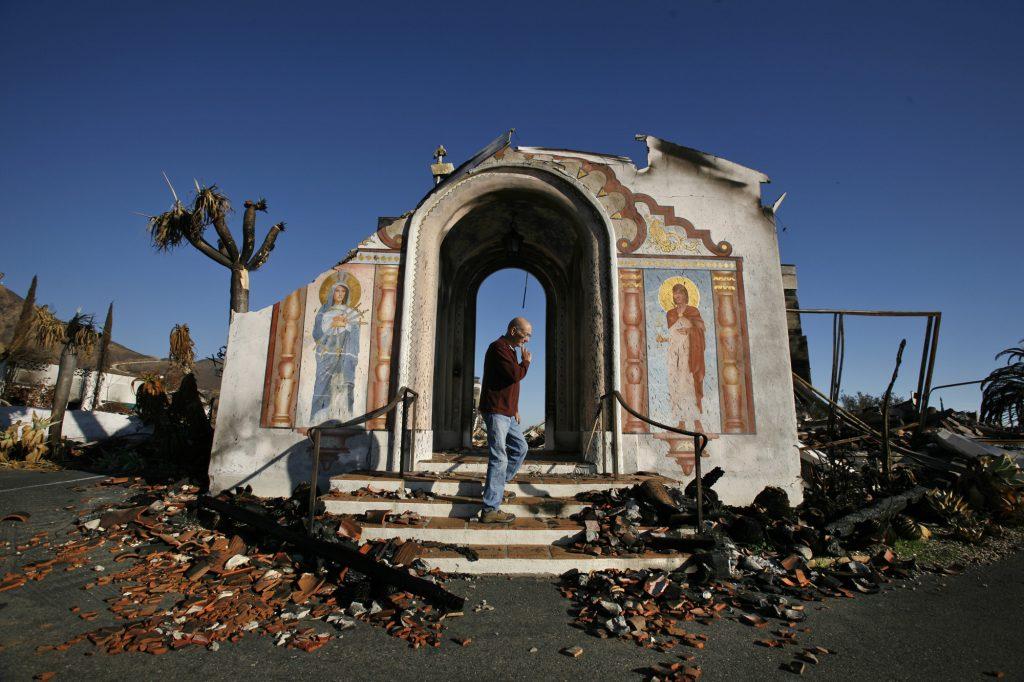 Brother Nicholas Radelmiller walks through the burned grounds of the Benedictine Anglican orders’ Mt. Calvary Monastery and Retreat House outside Santa Barbara, California, after it was destroyed in the Tea Fire on November 14, 2008. (Photo by Brian Vander Brug/ via Getty Images)

Fortunately, the monks had evacuated—and at the last minute, someone went back inside for the Rembrandt, saving the panel from a fiery end. Having narrowly escaped being burned to ash, the painting went to the Holy Cross Monastery in West Park, New York, where it remained until last year’s sale.

Since purchasing the work, Schorer has shown it to a number of Rembrandt scholars, including Otto Naumann, Gary Schwartz, and Arthur Wheelock, a former curator of northern Baroque art for the National Gallery of Art in Washington, D.C. A consensus in favor of a Rembrandt attribution appears to be slowly growing.

The evidence, Schwartz told  magazine, which broke the news of the discovery, is “not only convincing, it is thrilling.”

If restored to the Rembrandt canon, it would join a recent spate of works by the master to do so.

The technical analysis is also quite promising. Peter Klein, a German dendrochronology expert, analyzed a high-resolution scan of the unpainted edge of the wood panel and found it could date from as early as 1619. More importantly, the grain patterns were an exact match from those of another Rembrandt panel painting, suggesting the two works were done on two sections of the same board.

But for Schorer, the moment of certainty came much sooner.

“The moment when I first had it in my hands, I saw how incredibly economical it was,” he recalled. “The artist conveyed so much about this man with so little paint. That’s something that Rembrandt did very well, which is to create the entirety of a soul with almost no paint—a little brown, a little white, and a few brushstrokes but just so judiciously applied. It creates a face that’s quite a miracle.”

The Back Room: Don’t Believe the Hype