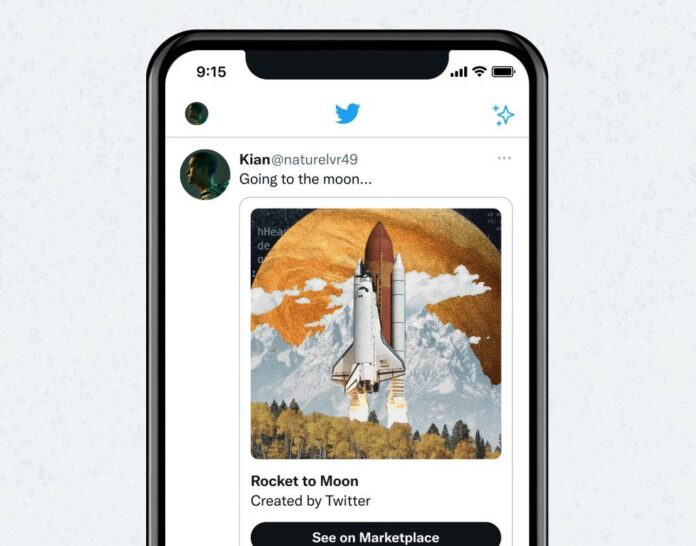 As the internet rages and revels about the confirmation of Elon Musk’s $44-billion Twitter takeover, the social media company has given a timely wink at the future. Perhaps unsurprisingly, it involves cryptocurrencies and NFTs.

In an integration Twitter has called NFT Tweet Tiles, users will be allowed to buy, sell, and showcase NFTs through tweets. The feature, which is still being tested, has an enlarged panel for displaying an NFT artwork and offers a click-through button to marketplace listings.

The choice of first partners is interesting not only for the number of blockchain networks it includes—namely Ethereum, Tezos, Polygon, Flow, Solana, and Immutable X—but also for the absence of OpenSea, often referred to as the world’s first and largest NFT marketplace.

The news was announced in a tweet by Twitter Dev and although Musk’s personal involvement is unknown and seemingly unlikely, Magic Eden tweeted its gratitude to the company’s new owner “for making this happen.”

For now, NFT Tweet Tiles may be little more than an aesthetic upgrade for Twitter’s legion of NFT devotees, but it potentially gestures in the direction the San Francisco-based company is headed. Twitter posted a net loss of $221 million in 2021 and has struggled with profitability issues for years. Beyond cutting spending, including an anticipated massive staff layoff, Twitter needs bolster advertising, which made up more than 90 percent of its revenue last year, and find new revenue streams. Closer connections with NFT marketplaces may well tick both boxes.

The integration presents a format that will likely encourage NFT platforms to advertise on Twitter and, potentially, for the social media company to take a cut of sales in the future.

The move continues Twitter’s push to cater to the NFT and crypto communities following the launch of hexagonal NFT profile photos and media reports earlier in October claiming that the company was developing a cryptowallet prototype.

Anarchy in the UK (well, at Sotheby’s)—Sex Pistols art to go under the hammer