Home News ‘It was screaming for a female’: Shahzia Sikander on creating a statue... 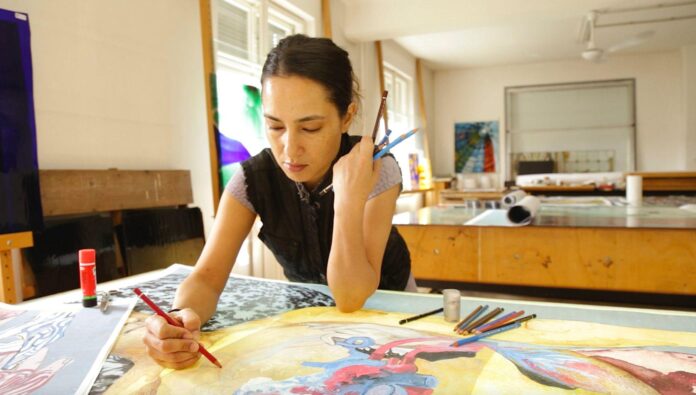 When Shahzia Sikander served on the New York Mayoral Advisory Commission on City Art, Monuments and Markers in 2017, the Pakistani American artist became more highly attuned to the lack of female representation across the public landscape. “Few monuments celebrate women and, even if they do, the histories carry so much burden,” says the MacArthur fellowship-winning artist, who is best known for her paintings, video animations and mosaics that adapt the visual language of Indo-Persian miniature painting to explore ideas of gender, migration and hyphenated identities.

This month, Sikander debuts her first site-specific outdoor sculptures in her exhibition Havah…to breathe, air, life (17 January-4 June) in New York’s Madison Square Park. A pair of fierce, golden allegorical female figures will loom over the park’s lawn and from the rooftop of the adjacent Courthouse of the Appellate Division, First Department of the Supreme Court of the State of New Work, at 25th Street and Madison Avenue.

It is the first time the Madison Square Park Conservancy, which co-commissioned the work with Public Art of the University of Houston System (where it will travel), has collaborated with the courthouse. Its justices approached Brooke Kamin Rapaport, the conservancy’s deputy director and chief curator, with interest in bringing the work of diverse contemporary artists into the mix of the courthouse’s historic murals and justice-themed statuary.

“This was a moment to push our programme out further from the park,” says Rapaport, “and seemed like a natural platform for Shahzia to take on the public space of a courthouse—placing her work into that visual conversation of how justice can be rendered.”

Mythic and stylised, each of Sikander’s radiant figures has hair braided like spiraling ram’s horns and strikes an arms-akimbo power stance—only their arms and feet are actually swirls of tendrils suggestive of roots. “They carry their roots,” says Sikander, who opted not to base the figures on recognisable historic women, but rather a broader representation of the feminine bridging race and culture. “It shows the resilience of women.”

The figure in the park, to rise a towering 18ft high, will be hoisted at the waist by a monumental hoop skirt—referencing the stained-glass dome of the courthouse and evocative of a globe over which the figure appears to preside. Sikander is embellishing the latitudinal and longitudinal bands of the skirt with a calligraphic script in blue-green mosaic spelling the word “havah”, meaning “atmosphere” in Urdu and “Eve” in Arabic and Hebrew.

Crowning the roof of the courthouse, a similar gold-patina feminine figure (without the skirt) will emerge from a lotus plant—a symbol of wisdom—and stand shoulder-to-shoulder in the lineup of nine classically draped statues of male legislators from throughout history including Confucius, Moses and Justinian. A tenth sculpture, depicting Muhammad, was removed from the rooftop in 1955 and Sikander saw the empty plinth on her initial tour of the courthouse. “It was screaming for a female,” says Sikander, who has carved a lacy judicial collar reminiscent of the late Supreme Court justice Ruth Bader Ginsburg at the neck of each her sculptures.

An augmented reality experience, Sikander’s first experimentation with the technology and accessible through the Snap app, will provide visitors looking at the sculpture in the park through their phones with an apparition of her doppelgänger that moves around and helps visitors find the second sculpture on the rooftop across the street.

Sikander hopes her figures will function in their form and presence as icons of resistance. She interprets the term ‘havah’ as meaning “to breath, to add air, to change a narrative, to add some space”, she says. “Eve is also the first law-breaker, right?”