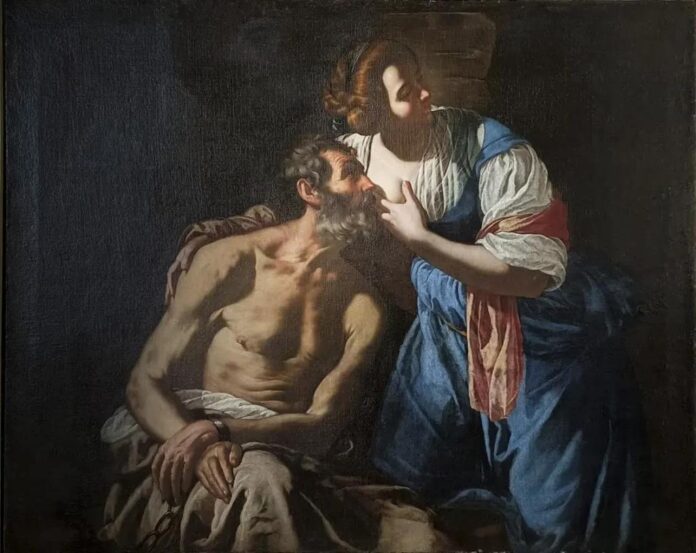 Italian authorities have blocked the sale of a prized 17th-century painting by Artemisia Gentileschi at auction in Austria, alleging it was illegally exported by its owners.

The Carabinieri TPC, Italy’s cultural heritage protection agency, said that the painting’s owners allegedly obtained export permission three years ago by describing the piece as the work of a follower of Gentileschi, rather than the artist herself.

The painting, called Caritas Romana (Roman Charity), depicts the ancient Roman myth of Pero, who surreptitiously breastfed her jailed father after he was sentenced to death by starvation. It was commissioned by the Pugliese count Giangirolamo II Acquaviva d’Aragona in the mid-17th century.

TPC authorities discovered the piece listed in a forthcoming sale at the Vienna auction house Dorotheum and subsequently seized it. The artwork has since been returned to Bari, the southern Italian city where experts believe it was created by Gentileschi some 400 years ago. The auction house did not immediately respond to a request for comment.

Members of the Carabinieri TPC detailed the case to local reporters in Bari this week, explaining that they’ve followed the artwork’s status since 2020. A criminal investigation into the owners of the piece is now underway, they added.

Representatives from the Carabinieri TPC did not immediately respond to an inquiry from Artnet News, but Giovanni Di Bella, the head of the agency’s Bari-based unit, told that the fate of Caritas Romana hinges on the outcome of that probe. If the artwork’s owners are found to have acted illegally, the piece could be confiscated by the state and eventually transferred to a local museum.

If the buyers are found innocent, they will retain ownership of the painting—though they will not be allowed to transport it across country lines.

Experts estimate the artwork to be worth at least €2 million ($2 million a figure that roughly squares with the Baroque painter’s recent auction results. Since 2017, seven of the artist’s pieces have topped the $2 million mark, according to the Artnet Price Database. That includes her three-quarter length Portrait of a Lady, which sold for $2.6 million at Sotheby’s New York in January of this year.