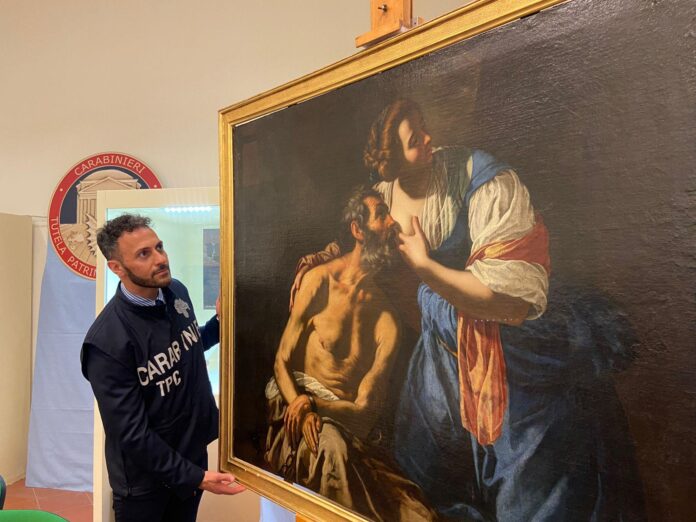 Italy has returned an “exceptional” painting by the female Baroque artist Artemisia Gentileschi to Bari, the city where it was conceived 400 years ago, after blocking its sale at the Vienna auction house Dorotheum. During a press conference in the Pugliese capital yesterday, officials explained that the work’s private owners are being investigated for supposedly arranging its illegal transport abroad.

But one of Italy’s preeminent Gentileschi experts, Riccardo Lattuada?, has argued that the painting, which had been valued at nearly €2m by the auction house, should not have left the country in the first place, and has accused the state of “incompetence”.

Commissioned in the mid-17th century by Giangirolamo II Acquaviva d’Aragona, a Pugliese count descended from Southern Italy’s Spanish rulers, the work Caritas Romana formed part of the nobleman’s 500-strong collection of paintings once displayed at the Castello di Marchione. The piece portrays the ancient Roman story of Pero, who secretly breastfed her imprisoned father, Cimone—a subject famously treated both by Rubens and Caravaggio in his Seven Works of Mercy (around 1607).

Gentileschi’s “highly important” version “had the potential” to reach its €2m estimate, Lattuada tells The Art Newspaper. While a number of recently auctioned Gentileschi works were previously unknown—such as Self-Portrait as Saint Catherine (1614-16), which fetched €2.4m in 2017, and Self-portrait as Saint Catherine of Alexandria, which sold for £3.6m the following year—Caritas Romana was well documented and appeared in an exhibition at the Castello di Marchione in 2018.

Working with a Tuscany-based intermediary agency, the painting’s current owners, Michele Forte and Domenico Iannuzziello, obtained permission from the culture ministry’s exports department for the work to be transported abroad in 2019, by concealing the painting’s identity and real value, investigators believe. The Carabinieri TPC, Italy’s stolen art hit squad, began searching for the work the following year and froze its sale after discovering it had been listed at Dorotheum, Giovanni Di Bella, the head of the unit’s Bari team, tells The Art Newspaper.

The sequestered work is being stored in “the best conditions” in premises managed by Bari’s superintendent, Di Bella says. Its ultimate fate depends on the findings of the investigation, he added. Should judges rule that the owners broke the law, the painting will be definitively confiscated by the state, and could be donated to a Puglia museum; if they are exonerated, the work will be returned to the owners, though with a block on its future movement out of the country.

Lattuada argues that it is the state’s fault for allowing the work to leave the country in the first place, arguing that the culture ministry’s underfunding and inexpertise is partly responsible. “The Carabinieri TPC does fine work in recovering works like these,” Lattuada said. “But it would be better if such huge errors did not happen in the first place.”