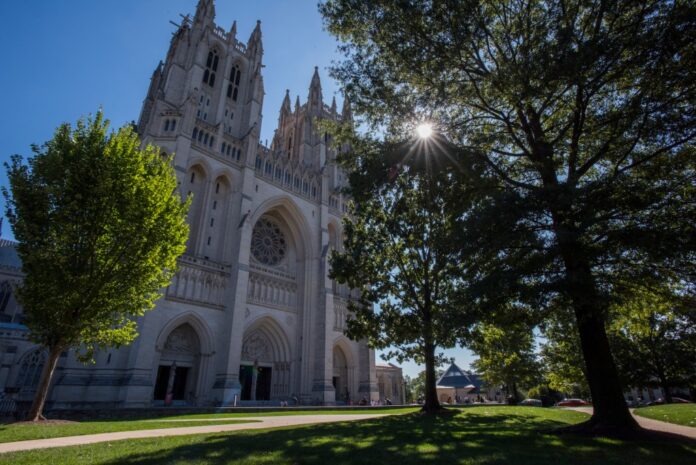 WASHINGTON NATIONAL CATHEDRAL has turned to a great American artist and one of the nation’s top poets for a high-profile project intended to put the renowned, institution on the right side of history.

Several years ago, the National Cathedral embarked on a process of replacing two stained-glass windows featuring images of the Confederate flag and Confederate Generals Robert E. Lee and Thomas “Stonewall” Jackson. The windows were removed in 2017.

On Thursday, the National Cathedral announced it had commissioned Kerry James Marshall to design new racial justice-themed replacement windows. Inscribed in stone, a new poem by Elizabeth Alexander will accompany the window installation.

The project is expected to be completed in 2023. The Cathedral said the new windows will be a permanent part of the institution’s “sacred iconography.”

“For nearly 70 years, these windows and their Confederate imagery told an incomplete story; they celebrated two generals, but they did nothing to address the reality and painful legacy of America’s original sin of slavery and racism. They represented a false narrative of what America once was and left out the painful truth of our history,” The Very Rev. Randolph Marshall Hollerith, dean of Washington National Cathedral, said in a statement.

“We’re excited to share a new and more complete story, to tell the truth about our past and to lift up who we aspire to be as a nation.”

Speaking at the Cathedral press conference, Marshall said it was a challenge to discuss the project when he had yet to make any decisions about his approach.

“I’m not going to be able to shed any light on what the project is going to be because the challenge that the committee set for the replacement windows is a monumental task and it’s something cannot be known ahead of time because the issues that the windows have to address are more complicated than anything that might be configured in a really simple sort of concept or idea,” Marshall said.

“This is something that’s actually going to take a lot of time because history itself, as most people know, is a very complicated narrative to try to wrestle down.”

“For nearly 70 years, these windows and their Confederate imagery told an incomplete story; they celebrated two generals, but they did nothing to address the reality and painful legacy of America’s original sin of slavery and racism. They represented a false narrative of what America once was and left out the painful truth of our history.”
— The Very Rev. Randolph Marshall Hollerith

In 2017, during a Unite the Right white supremacist “rally” in Charlottesville, Va., rally goers carried torches and Confederate flags. A young woman was killed and dozens of other counterprotestors were injured, when a rally participant plowed his car into a crowd. After that tragic day, the Cathedral’s Confederate windows were deconsecrated and removed.

The Windows Replacement Committee is overseeing the future of the Confederate windows and the commissioning of the new windows. The committee includes Cathedral leadership and Gwendolyn DuBois Shaw, curator and professor of art history at the University of Pennsylvania. Motley and Rynd are co-chairs of the committee.

After the police murder of George Floyd in Minneapolis, Minn., in May 2020, the Cathedral began collaborating with the Smithsonian’s National Museum of African American History and Culture (NMAAHC). Over the next year, the window that depicts Confederate General Lee will be on view at NMAAHC, featured in the exhibition “Make Good the Promises: Reconstruction and its Legacies” (Sept. 24, 2021-Aug. 21, 2022). When the show concludes, the Lee/Jackson windows will undergo conservation at the Cathedral and be stored away from public view.

“This is something that’s actually going to take a lot of time because history itself, as most people know, is a very complicated narrative to try to wrestle down.” — Kerry James Marshall

AT THE PRESS CONFERENCE, Hollerith said, “Monuments in sacred spaces carry special weight and meaning and when it became obvious that these windows were a serious barrier to this cathedral being a house of prayer for all people, we knew that we had to find a better way. Today, we see that better way in these two visionary artists and we are thankful for their willingness to partner with us in this work.”

Marshall and Alexander had been top of mind for the committee from the very beginning. “They were our dream,” Hollerith said.

He went on to describe the mandate from the windows committee: “To create for all time an artistic embodiment of both darkness and light, the pain of yesterday and the promise of tomorrow and the quiet and exemplary dignity of the African American struggle for justice and equality.”

When Marshall spoke, the artist said he had spent the last two days at the National Cathedral, his first time ever visiting the space and being in the building.

“It was really important for me to come here and really get a sense of what the place is,” Marshall said, “What’s already here. What the mission they’ve tried to accomplish is. And then how I might be able to fit whatever it is that the Cathedral needs in order to fulfill its ambition for these windows. To fit that into a space in which they perform the kind of work that the Cathedral needs for these windows to do.”

“It was really important for me to come here and really get a sense of what the place is. What’s already here. What the mission they’ve tried to accomplish is. And then how I might be able to fit whatever it is that the Cathedral needs in order to fulfill its ambition for these windows.”
— Kerry James Marshall

MARSHALL ANSWERED A FEW QUESTIONS from reporters at the press briefing. It was difficult to hear the questions, but his responses indicated the nature of the inquiries. The artist spoke about his experiences with faith, the medium of stained-glass, and image making:

“I don’t have any specific faith background of my own, but I think I have a fairly unique experience with church and faith that I think actually puts me in a position to consider a broader spectrum of ideas and concepts than maybe a lot of people who have committed themselves, or dedicated themselves, to a single faith.” — Kerry James Marshall

“The idea of being an artist, means that you work with images, you work with ideas, and the medium in which you work, the choice of medium, is not a limitation. …It’s an opportunity to actually enhance some other dimension of the way the imagery operates.” — Kerry James Marshall

“I take everything I do pretty seriously. I think the creation of images is really an immense responsibility because the hope is that you create images that can live way beyond the moment in which they were made.”
— Kerry James Marshall

Marshall said it was Motley who called him on the phone and invited him to participate in the windows project. His overture was impossible to refuse, the artist said.

“What you’ll find when you hear Eric speak is that not only is he an irresistible force,” Marshall said, “he’s next to impossible to say no to because his enthusiasm for the project was so inspirational to me, that I don’t feel like I had any choice but to say, ‘Yes.’”

Motley spoke next and his enthusiasm for the project and Marshall was clear.

“The dean challenged Chase and I, as co-chairs of this committee, to help imagine with our fellow committee members—with over 200 windows in this space—what these two windows could tell about the ironies of American history, about the affirmation of faith, about reconciliation, and about reimagining the world in which we live,” Motley said.

“We knew that there was a story to be told and to our good fortune, we all decided to engage one of the most important storytellers. Kerry James Marshall is a great artist, but he is a most exceptional storyteller. And to invite him into this space, to join us on this incredible journey, this odyssey of grace and gratitude and this odyssey affirms our faith in America and humanity and in all people is extremely an honor.”

The National Cathedral’s replacement windows are funded by the Andrew W. Mellon Foundation’s Monuments Project. Benefactors also include the Hearthland Foundation, founded Kate Capeshaw and Steven Spielberg (sponsoring the stone tablets inscribed with poetry by Elizabeth Alexander), and the Ford Foundation, which is supporting public programming around racial justice and racial reconciliation issues. Alexander is the president of the Mellon Foundation.

Things to Know About Salvador Dalí