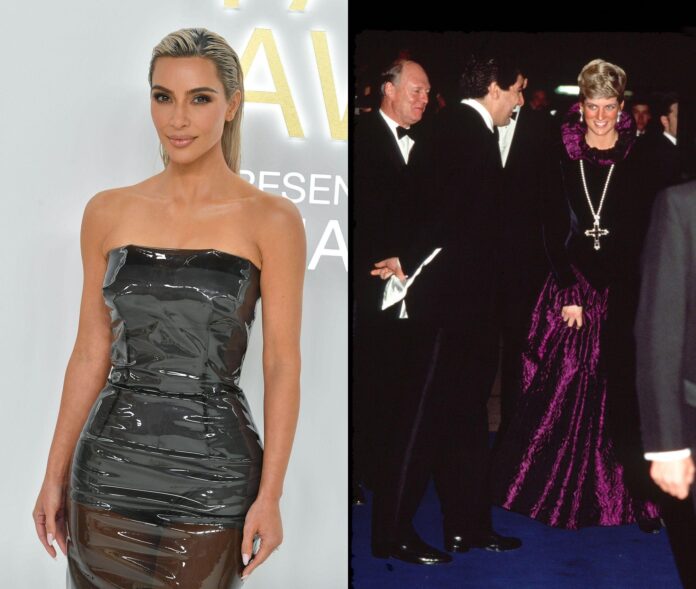 Other bidders couldn’t keep up with Kim Kardashian yesterday (18 January) at Sotheby’s in London, where a representative for the reality television superstar and entrepreneur placed the winning bid on a scintillating amethyst cross that was previously worn by Princess Diana. The price, with fees, came to £163,800, well above the pre-sale estimate of £80,000 to £120,000 Sotheby’s had given the jewel, known as the Attallah cross, which was the star attraction in its Royal and Noble auction.

The cross-shaped pendant, which was created by jewellers Garrard in the 1920s, is believed to be a unique piece, with diamonds framing large amethyst stones in a fleurée (floral) style. Diana most famously wore the eye-catching jewel to a fundraising gala for the Birthright charity in 1987, pairing it with a complementary purple dress designed by Catherine Walker. She wore the cross on several other occasions, according to Sotheby’s, mostly for private events.

The cross was being offered at Sotheby’s from the estate of Naim Attallah (1931-2021), the Palestinian-British businessman, publisher and former chief executive of Asprey & Garrard. The impressive result underscores the growing importance for Sotheby’s (and rival Christie’s) of the jewellery, luxury and memorabilia categories.

The dazzling Attallah cross stands in dramatic contrast to the recent aesthetic inclinations of Kardashian’s ex-husband Ye (formerly Kanye West)—the minimalist home the couple once shared prominently features a pristine, white slashed canvas by Lucio Fontana. More recently, she has posed with a pink-hued James Turrell work that may be a better match for her newly acquired jewel.

“We are delighted that this piece has found a new lease of life within the hands of another globally famous name,” Sotheby’s head of jewellery in London, Kristian Spofforth, said in a statement. “This is a bold piece of jewellery by its size, colour and style which cannot fail to make a vibrant statement, whether it be of faith or fashion—or indeed both.”