Home News ‘Like a Phoenix Rising From the Ashes’: From Beyond the Grave, Austrian... 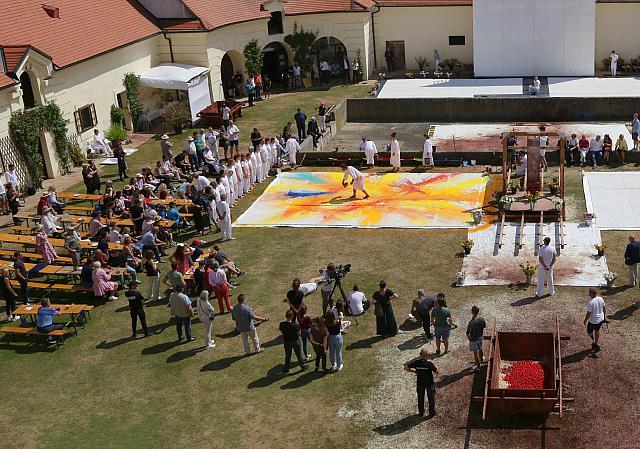 The transgressive, blood-loving Hermann Nitsch, a boundary defying artist who died this April at the age of 83, had his final hurrah at an Austrian castle in late July according to plans carefully laid out before his death.

The Austrian, known the world over for art performances called “actions” that often included blood, animal carcasses, and orgiastic rituals, was barely recognized as an artist when he began hosting cult-like performances in the 1960s (together with the highly controversial Otto Muehl). By now, he is Austria’s most famous cultural (and art market) export.

The posthumous artwork took place as a happening between July 30 to August 1 at Prinzendorf Castle, a sprawling estate in lower Austria that was purchased for Nitsch by his former wife in 1971. The two-day event was the last act of his infamous , an ongoing multi-act series that Nitsch began in 1998.

And while he lay quietly in a grave not far from the site, his penchant for extremity was on full display. 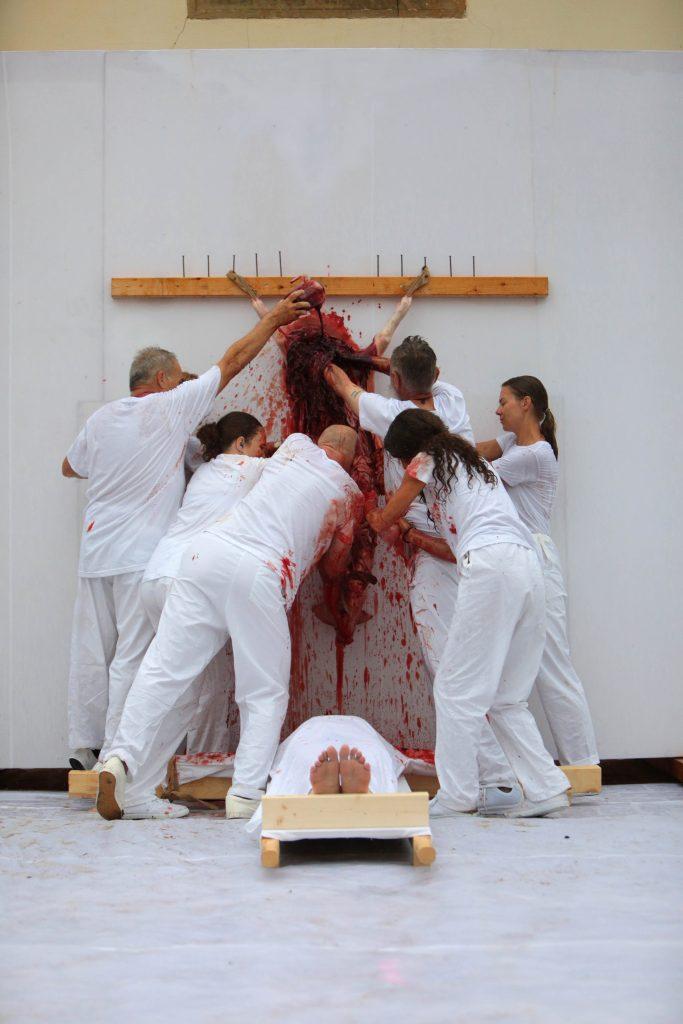 A Dark and Twisted Celebration

The resplendent weekend saw scores of Nitsch’s oldest and longest collaborators in attendance, as well as three orchestras, a chamber music group, a choral school, a large mixed choir, a carpenter, and a butcher. There was also more than 3,000 kilograms (6,000 pounds) of tomatoes and grapes, and 1,000 litres of blood.

The condensed version of the so-called work  was a total assault on the senses—a symphony of life and death and a gesamtkunstwerk (total work of art) with no concern for moral turpitude whatsoever. Initially set to to take place in 2020 before being delayed, the artist had left specific instructions for the piece with few details spared, even outlining the tastes and smells that were to be experienced.

Pepe Morra, Nitsch’s longtime friend and founder of the Museo Nitsch in Naples, was present alongside others who had been close to the artist. Yet the enduring legacy of Nitsch was not lost on the wider group of attendees, including the bat-eating performance artist Petr Davydtchenko or Miles Greenberg, the 24-year protégé of Marina Abramovic who is known for durational performances that have included walking on a conveyor belt for 24-hours straight (minus the 20 minutes he lost consciousness). 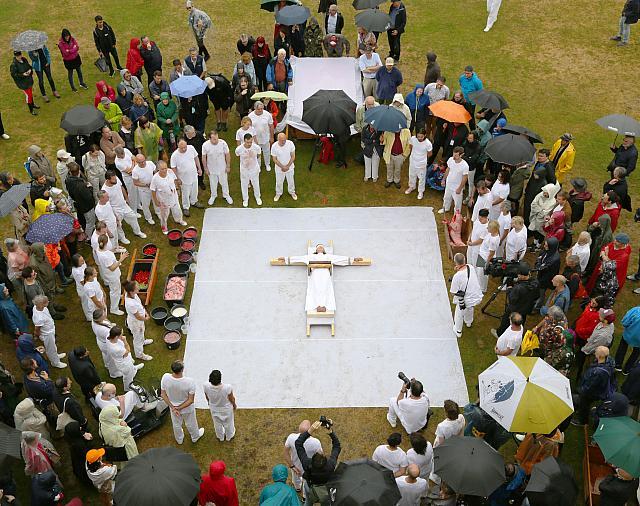 His longtime Munich-based dealer Jahn und Jahn described Nitsch’s work as containing “creation, ecstasy, pain, death, and resurrection.” Indeed, one could see each of these aspects emerge as the performance kicked off at pre-dawn with slaughtering of a pig.

Later, performers, mostly unpaid volunteers, were crucified with rope as remnants of the pig were presented before them. Nearby, a chef prepared communal meals, full of—you guessed it—pork.

Throughout the two days, a bartender served glasses of white wine spritzers. The music was a wide ranging and diverse score that oscillated between atonal drone music, death metal, and happy-go-lucky brass band tunes that wouldn’t feel out of place at a local Austrian wine tavern. By the end of the weekend, viewers gathered around to watch performers create a macabre array of large-scale paintings with the blood of the slaughtered swine. 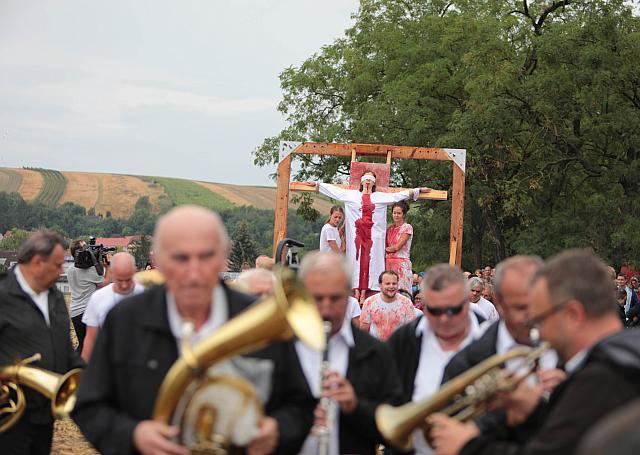 Not that anyone has ever accused the prophet of Viennese Actionism of modesty. For decades, Nitsch’s work stood out for appropriating Catholic rituals and pagan sacrificial rites into dark, existential versions of Willy Wonka’s .

Born in 1938, Nitsch’s art was shaped by early childhood experiences of war and loss. His performative art, which he began to create in the early 1960s, were condemned by the church and state, and he did not gain an easy following and was even arrested. But an avant-garde did gather around him and, by the mid-1960s, he had become one of Austria’s most notorious figures, courting controversy nearly everywhere he took his projects.

Speaking about his legacy, the Viennese dealer Lisa Kandlhofer said that Nitsch will likely be remembered as someone who developed an uncanny obsession with merging art and life. “[Nitsch] defied any and all artistic boundaries,” Kandlhofer told Artnet News. “His work, like a phoenix rising from the ashes, has the power to change people’s lives forever.” Pace Gallery began to represent Nitsch in 2022 together with Galerie Kandlhofer and Jahn und Jahn.

All told, Nitsch’s farewell felt a bit like a visceral finale for an artist not only consumed by death in his oeuvre, but now ensconced by it. It was a power performance by an artist who emphasized that he was not motivated by provocation. Instead, it is about “the self-realization of the spectator,” Nitsch wrote before his death. In a world full of so much horror and misery, Nitsch’s madness-inducing theatrical spectacles seem to function like a mirror. Nitsch was driven to uncover uncomfortable truths that we as a society collectively forget.