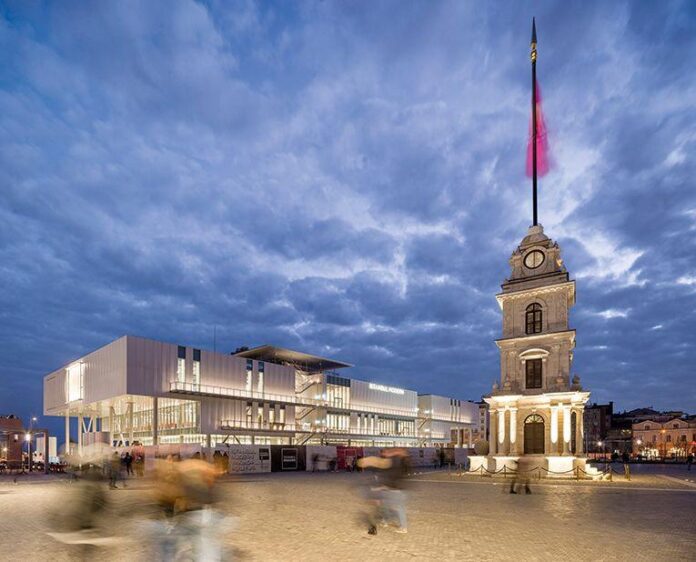 When the first edition of the Istanbul Biennial opened in autumn 1987, Turkey did not have a contemporary art museum. Today, plenty of institutions dedicated to art have sprouted in the city. They have done so under the watchful eye and implicit threat of Recep Tayyip Erdoğan’s regime.

The unveiling of Istanbul Modern in 2004—in a former warehouse in the Karaköy neighbourhood, overlooking the Bosphorus—introduced the nation to the concept of a museum that showcased not Byzantine frescoes or Ottoman tapestries, but Turkish contemporary artists working in the moment.

After four years of construction—during which the collection has been temporarily shown in a nearby 19th-century building—a new five-storey, 15,000 sq. m Istanbul Modern, designed by Renzo Piano on the museum’s original site, is expected to open later this year, and may coincide with the 17th Istanbul Biennial, which opened on 17 September and continues until 20 November.

According to Bige Örer, the director of both the biennial and contemporary art projects at the Istanbul Foundation for Culture and Arts (İstanbul Kültür Sanat Vakfı or İKSV), the biennial is critical for fostering a “returning museum audience” in Istanbul. “Through occupying existing museums, but also functioning as a temporary institution, the biennial brings global debates to a curious crowd,” Örer says.

The biennial employs the Pera Museum as its main hub, but is increasingly making use of the city’s heritage sites. Müze Gazhane, an art centre repurposed from a former gasworks last year, is being used for the first time as an exhibition space. Two historic hamamlar (baths), a 19th-century Greek girls’ school and the studio of a 20th-century calligrapher are among the biennial’s other locations.

Freeing the biennial from one theme can be seen as strategic, as it helps to outmanoeuvre government censorship. “Artists and institutions exist as long as they operate within the reality of the moment—which are susceptible to change,” Örer says.

Pera, Istanbul Modern and numerous other art institutions are privately owned by Turkey’s prominent collectors or affiliated organisations. Given the continuing control on free speech, the contemporary museum sector has benefited from privatisation. “As long as programming is handled by experts and local communities are not overlooked, this new sector has the power to transform,” Örer says.