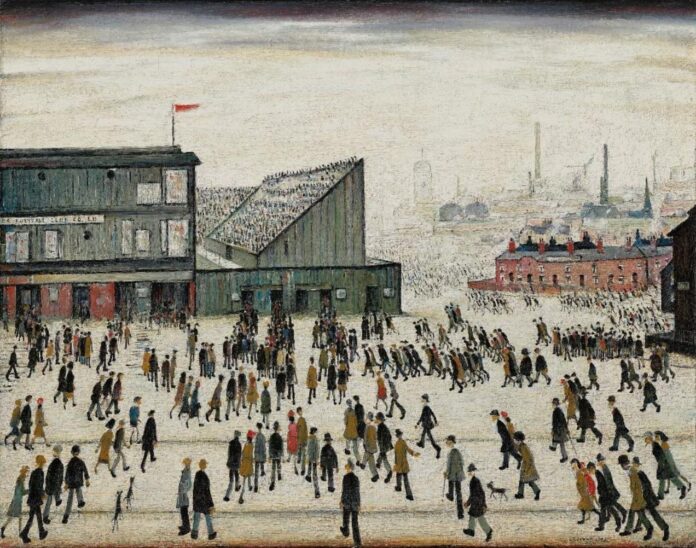 A UK-based charitable foundation that recently received an official warning from the Charity Commission has consigned L.S. Lowry’s Going to the Match (1953) to auction, with a sizeable £5m to £8m estimate.

If it fetches nearer the top end, it could set a record for the British Modernist; Lowry’s current auction record stands at £5.6m, achieved for The Football Match (1948) in 2011.

The later painting, which depicts fans filing into the now-demolished Burnden Park (the previous base for the Bolton Wanderers), is being sold by The Players Foundation, a charity concerned with supporting players and former players, which was formerly part of a wider Professional Footballers Association.

The latter received an official warning following an inquiry into multiple concerns around mismanagement between 2013 and 2019, including an alleged “failure to ensure its assets were being used in the most appropriate way”. The regulator has acknowledged steps to remedy the failings have since been made.

The work, which was painted for an exhibition sponsored by The Football Association, is due to be sold at Christie’s Modern British and Irish art sale in London on 19 October, having been bought by the charity for £1.9m from Sotheby’s in 1999, when it quadrupled its pre-sale estimate. At that time, the sum was a record for Lowry—a result the then-chief executive of the charity, Gordon Taylor, described as “worth every penny”.

Today, Nick Orchard, Christie’s head of Modern British and Irish art, describes Going to the Match as “iconic”. The painting is, he adds, “immediately Lowry, yet a timeless celebration of football, the beautiful game. This is what makes this such a great moment for his market”.

Described by the auction house as “arguably the best-known painting by the artist”, the canvas has previously been exhibited at Salford’s The Lowry and at the Salford Art Gallery.

A spokesperson for The Players Foundation says in a statement: “The trustees recognise the current financial crisis means we need all the income we can obtain, and all our assets have to function for us to ensure our ongoing work. We want to continue to assist people with dementia and provide benevolent grants to those in real financial need, amongst other things. This has led us to the inevitable decision that the Lowry has to be sold in the interests of our beneficiaries.”

‘The Party’s Over’: Art Market Players Brace for an Anxious 2023 Amidst Slower Sales, Growing Discounts