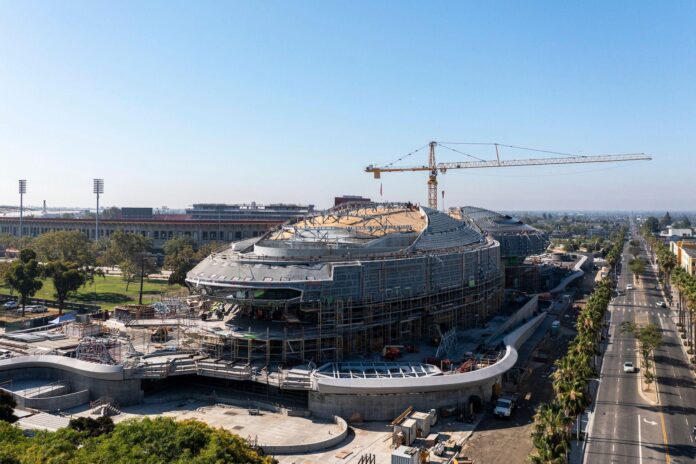 “Patience, you must have,” the Jedi master Yoda once told a precocious apprentice by the name of Luke in an episode from the original Star Wars trilogy, and the same could be said to those eagerly anticipating the opening of George Lucas’s museum in Los Angeles. The Lucas Museum of Narrative Art, previously expected to open next year, has delayed its debut until 2025, largely due to “supply chains, delays in getting materials, manufacturer issues”, as its director Sandra Jackson-Dumont told the Los Angeles Times.

In addition to pushing back its opening by two years, the museum—founded by Lucas and his wife, Starbucks chairwoman Mellody Hobson, with an estimated budget of $1bn—revealed this week the latest progress on construction of its appropriately futuristic building designed by Ma Yansong of the Chinese firm MAD Architects. The first of the more than 1,500 fiberglas-reinforced polymer panels that will give its exterior that sleek, spaceship-like silhouette have started to go on. Some of the more than 200 trees that will take root on the museum’s 11-acre campus have also been planted.

The museum also revealed a new slate of acquisitions, including a work by new art market darling Ernie Barnes, The Drum Major (2003), and John Singer Sargent’s 1879 rendering of Diego Velázquez’s iconic Las Meninas (1656). The museum has also scored a major Renaissance masterpiece in Lucas Cranach the Elder’s The Judgment of Solomon (1526). Its Old Masters holdings have been further boosted with the addition of the Baroque picture Triumph of Galatea (around 1650) attributed to Artemesia Gentileschi and Onofrio Palumbo.

True to its stated interest in “narrative art”, the museum has acquired a number of works directly related to or inspired by comic books. They include Kerry James Marshall’s multi-pannel work RHYTHM MASTR Daily Strip (Runners) (2018) and original art made for Love and Rockets (2010), an alternative comic by Jaime Hernandez.

The museum has also added works by the artist-founded political action committee For Freedoms and the artist Kadir Nelson that directly respond to famous images by Norman Rockwell, the artist and illustrator who is extensively represented in the museum’s collection. One of the Lucas Museum’s first major acquisitions was Rockwell’s Shuffleton’s Barbershop (1950), following its controversial deaccessioning by the Berkshire Museum.

The museum’s growing collection, Jackson-Dumont says, “features multifaceted perspectives through the stories humans have told throughout history”. She adds, “Through these works, we hope to ignite complex and nuanced conversation that may impact the ways folks understand the world, but perhaps even what they decide to do in the world.”

Andrea Fraser, who previously refused to sell her work to private collectors, discusses her new show at Marian Goodman gallery in New York

Art Industry News: Auction Houses Insist that the Art Market Is Still On Fire. Are They Telling the Whole Truth? + Other Stories