Today we will look at the most famous and beautiful cathedrals of the European part of the continent, which can surprise any traveler. It so happened that all the then great achievements of mankind in architecture, painting, and simple technology, were reflected in the temple architecture. Such geniuses as Michelangelo, Raphael touched upon the creation of these majestic structures.

The tragic event in France – the fire in Notre Dame, which destroyed the upper part of the building, the famous spire and the interior of the cathedral, is still being discussed all over the world. It is a loss not only for Paris but also for the whole of Europe. Those who did not have time to enjoy the beauty of the Cathedral of Our Lady of Paris are very sorry for the opportunity that was postponed indefinitely. And those who have been, are fond of pleasant memories. We have gathered for you the famous cathedrals of Europe, which are worth seeing. They differ not only in appearance, interior decoration but also in a unique history.

Almost all these structures of “frozen music” are included in the lists of world cultural heritage and protected by the state. And it does not matter in what architectural style they are made, or in what language they speak in these cathedrals. 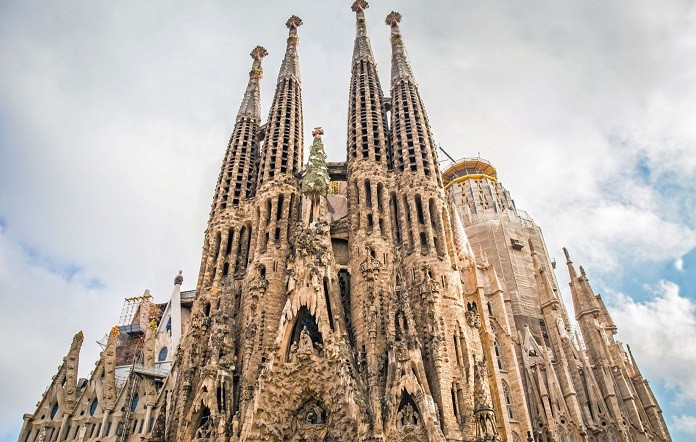 Perhaps many of you have seen this magnificent temple. It is located in Barcelona, one of the most important sights in the country. On the outside, it looks like a structure made of flowing sand. The church was designed by the famous architect Antonio Gaudi. The most interesting thing is that the construction began at the end of the 19th century and has not yet been completed. This is due to the huge size of the temple and the fact that the cathedral is built only for private contributions.

During the design of the temple, Gaudi was inspired by nature. Reflections of his ideas can be found in the columns of the cathedral – they look like trees with steep branches. Turtles at the base of the columns symbolize the balance between sea and land in nature.

Placement of mosaics on the roof of the temple was designed so that pieces of glass reflected the moonlight and helped the sailors returning home to find their way.

It is said that the complete construction of the temple may be completed by 2030. 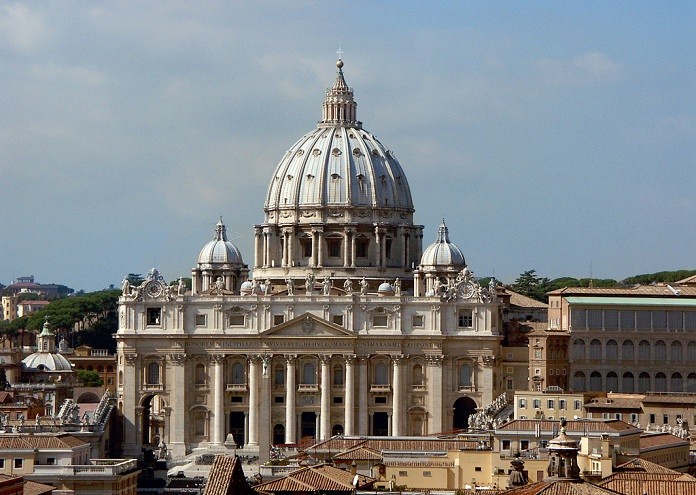 It’s located in the Vatican. The cathedral was designed in the Renaissance period by the famous artist Michelangelo and has the highest dome in the world (over 135 meters). The cathedral became the most famous church in the Vatican and one of the most popular tourist places in Europe. It is the largest Christian church in the world – the internal area of more than 15 thousand square meters and about 200 m in length.

The most talented artists of Italy (Rafael, Donato Bramante, Carlo Maderna, Giovanni Lorenzo Bernini, etc.) worked on the construction of the cathedral. The church can accommodate more than 60 thousand people and is the best example of Renaissance architecture.

The Cathedral of the Holy Cross and Saint Eulalia (Barcelona Cathedral), Catalonia, Spain 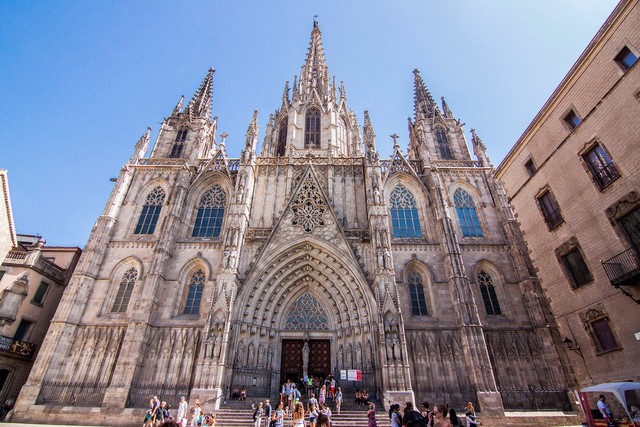 This pearl of Catalan architecture has been built for 120 years. The Barcelona Cathedral absorbed the best of the works of dozens of artists and architects. Even though they all worked at different times, they were all united by a special creative unity, thanks to which Barcelona boasts one of the most beautiful architectural structures in all of Europe.

Cathedral of the Nativity of the Virgin Mary, Italy 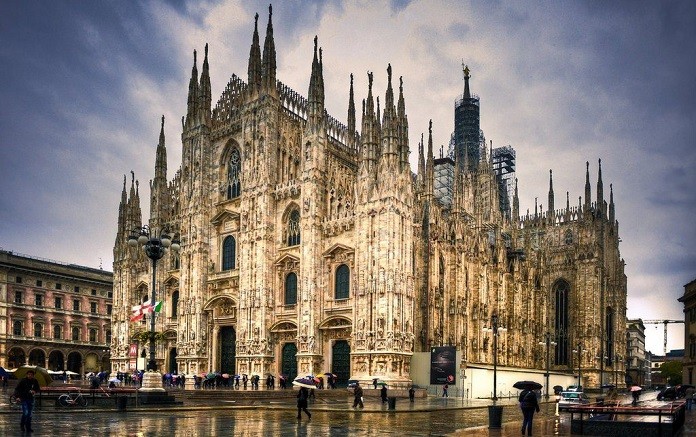 This is the largest and most luxurious cathedral in Italy. Construction began in the Middle Ages and lasted over 600 years. The cathedral of white marble with pink veins numbers thousands of statues, towers, columns, and spires. The views from the rooftop of the Duomo are enchanting and you can take in Milan at a glance. What’s more, there’s a museum in the cathedral now, you can even order a tour. 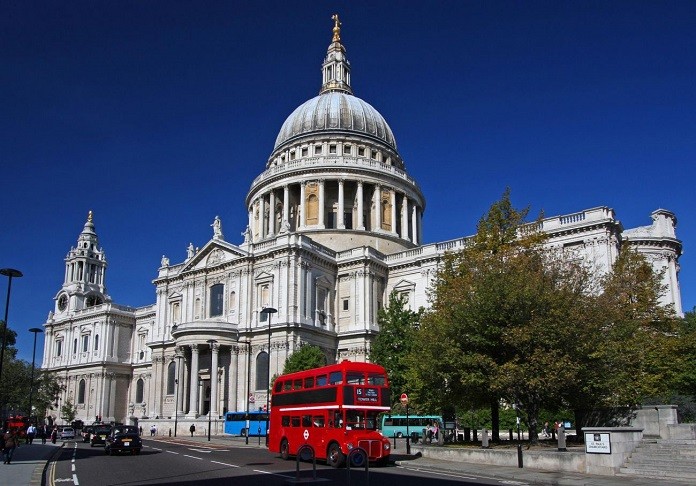 It is, in fact, the first Protestant cathedral to enter the official buildings of the Royal House of England. Built in the early 17th century, the cathedral is a masterpiece by architect Christopher Wren.

As experts agree, the architectural design of St. Paul’s Cathedral is almost perfect. This is not surprising, as Christopher was inspired by the architectural style of St. Peter’s Vatican Cathedral. The London Cathedral is, of course, several times smaller, but also impressive in grandeur and beauty, like other cathedrals in Europe. 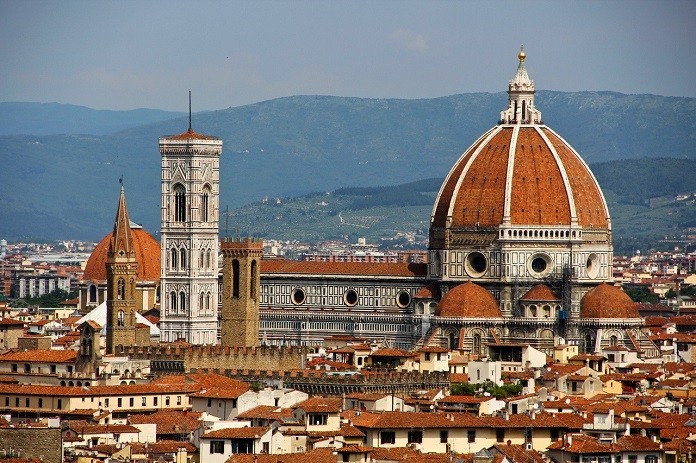 The majestic Florentine cathedral was designed by architect Filippo Brunelleschi. Officially the construction was completed in the 14th century, and it lasted only 100 years (which is very little for such a level of construction). The Cathedral houses the Museum of Opera, the Crypt of Santa Reparata, the Giotto Bell Tower, and the San Giovanni Baptistery. The stone arch, built and designed by Brunelleschi, gives the cathedral unique and even greater grandeur. Also inside the cathedral, there is a clock from the 15th century, which goes backward. 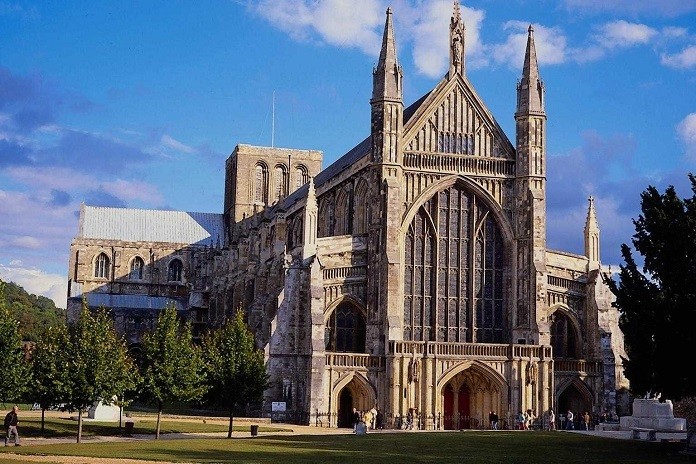 Historically, this cathedral has been known as the residence of the Benedictine community. Built in the early 11th century, it is the main temple of the diocese of the Anglican Church and home to Bishop Winchester. Although many cathedrals are as beautiful as they are great, it remains one of the most beautiful and largest Christian churches in Europe.

A few decades ago, dragons, horsemen, flowers, and other plants carved from wood decorated the cathedral roofs.

The Cathedral houses the throne of the Bishop of Winchester, as well as his many chapels, which preserve the memory of the bishops who once led the church.

True, tourists are mostly attracted not by the memorial sites of the cathedral, but the grave of the famous writer Jane Austen (died 1817). She was buried in the northern part of the basilica. 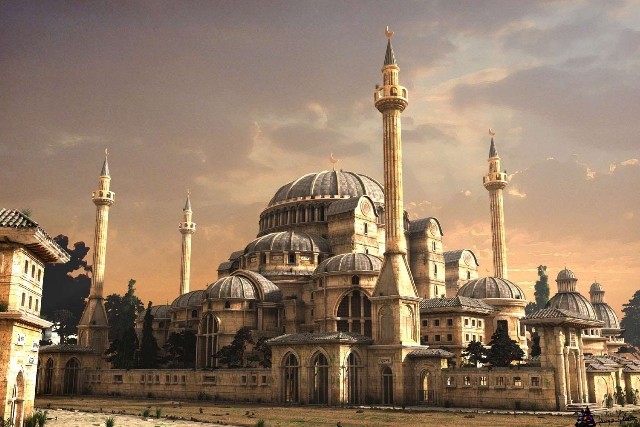 This cathedral first opened its gates in 537. At that time, its stunning architecture and the scale with which it was built allowed the cathedral to form legends of its unheard of magnificence. The best architects of those times worked on its creation: Isidore Miletsky, Anfimiy Tralsky, and Trdat. 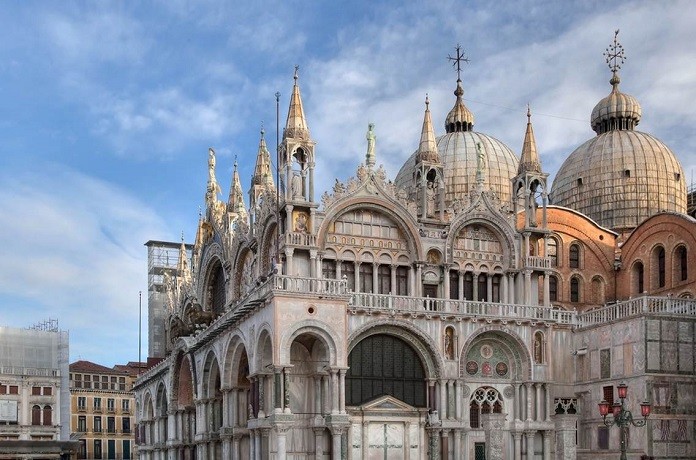 The cathedral has been preserved to this day and dazzles with its light and beauty on a bright sunny day. The very first building was built in the early 11th century to preserve the relics of the Apostle Mark.

The cathedral has always been the main monument of the city, where the Venetian people and government-held their greatest celebrations. In 1807, the Cathedral became the residence of the Patriarch of Venice. 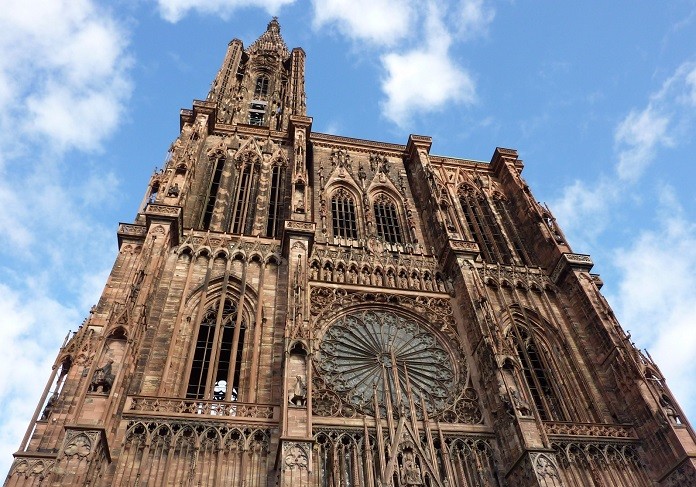 Like many cathedrals in Europe, it was built in the Gothic style, and construction began back in 1015. By the way, for many centuries the cathedral was considered the highest temple in Europe. The height of the spire is as much as 142 meters.

Every year millions of visitors want to see the cathedral of the great preacher Heilher Kaisersberg, the famous astronomical clock, sculptures, great organs, restored by Silberman in the 18th century. There are also numerous stained-glass windows, including a large pink window.

The cathedral is very coolly illuminated in the evening, we recommend a visit from 10 pm. The cathedral will unfold before you in its mysterious magnificence. 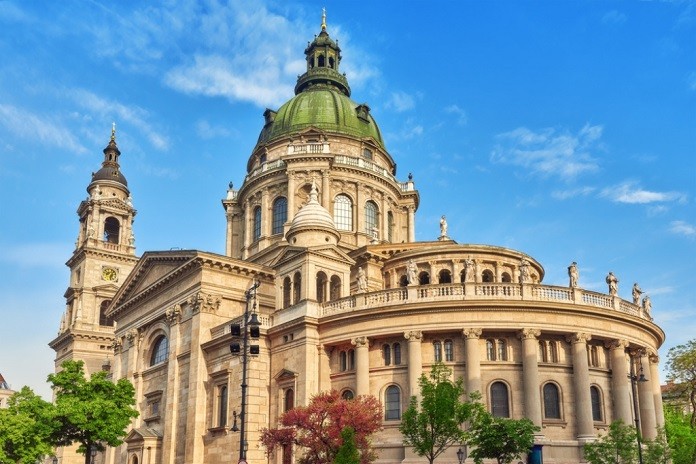 After the Hungarian parliament, the cathedral is the largest building in Budapest. The construction of this fabulous cathedral, which has a height of 96 m (the maximum number allowed in the capital), took neither much nor little – more than half a century. By the way, the cathedral is designed in neo-Renaissance style and looks like a cross with the same bars. But in the place of intersection is a large dome, which was destroyed in the past, so the whole basilica was reconstructed.

The basilica, with its panoramic view of the city, is surrounded by two beautiful bell towers. One of them has the largest bell in the country (about 9 tons). And to climb to the top and enjoy the beauty of Budapest, you need to walk 365 steps. 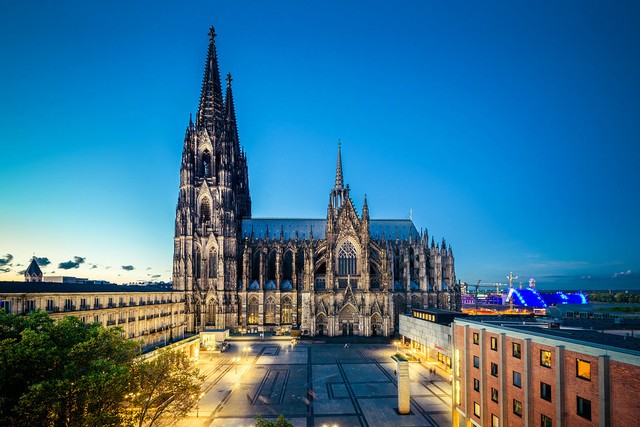 This cathedral is considered one of the greatest monuments of humanity. And the reason for this is that the construction of this cathedral began back in 1248 and continued (officially) until 1880. But even today, we can say that its construction continues. Cologne Cathedral is visited by every second tourist, who was first in Germany.

The Cathedral and Metropolitical Church of Saint Peter in York, England 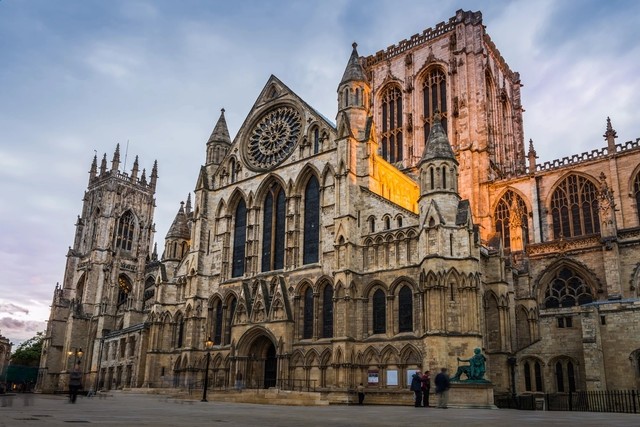 York Cathedral together with Cologne Cathedral occupies the first honorable place in the list of the largest medieval temples of the old woman of Europe. One of the main attractions of this cathedral is a huge 16-meter stained glass window. It was collected by hand from more than 100 thousand pieces of glass. During the construction of the cathedral, glass was incredibly expensive, and colored glass was produced by only a few craftsmen throughout Europe. 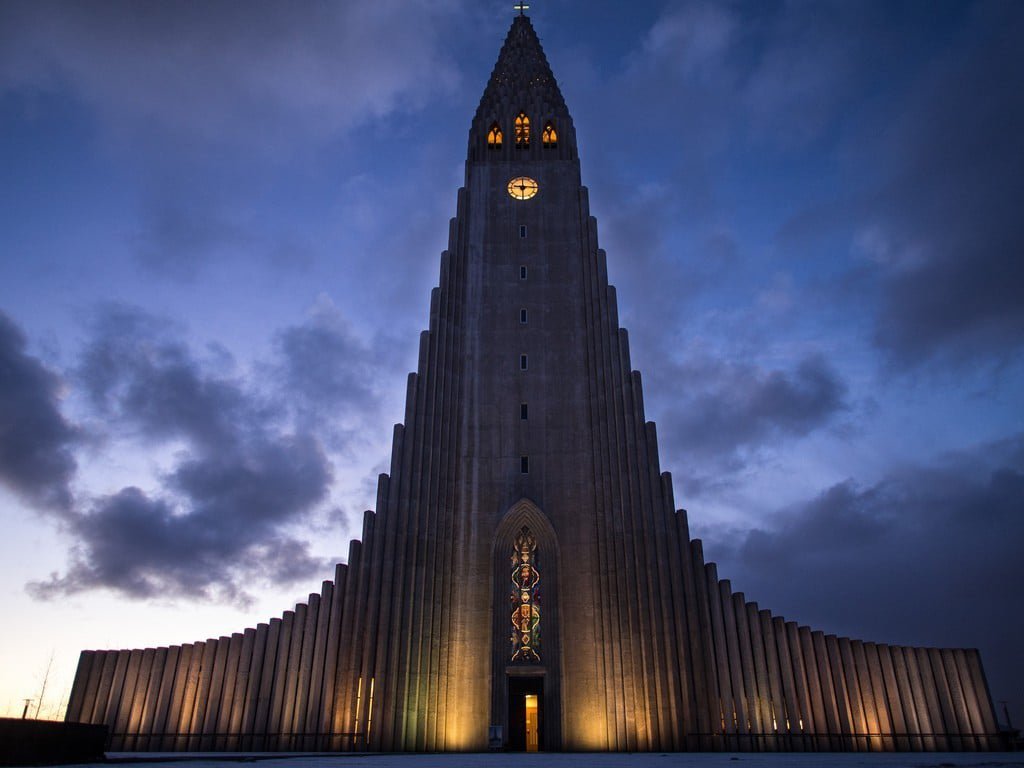 This cathedral has the title of the youngest cathedral in Europe. Its construction was completed in 1986 and lasted almost 40 years. Thanks to its unusual architecture, Hallgrímskirkja is one of the brightest sights in Reykjavik and the fourth tallest in all Iceland. When you fly up to the capital of Iceland and see the cathedral from a bird’s eye view, you feel real unforgettable emotions. 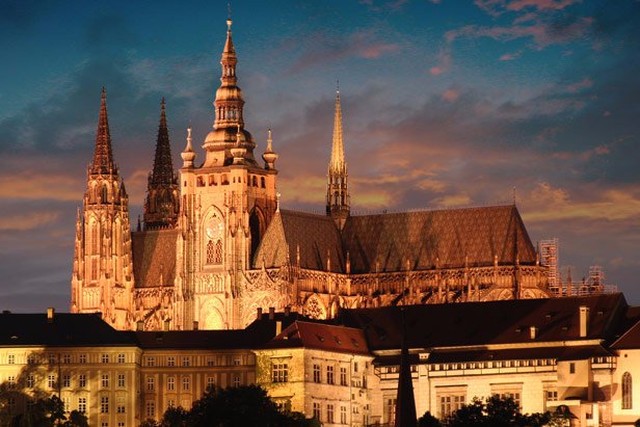 It is a big mistake that many tourists avoid Prague for the sake of more famous capitals. And that’s what you get convinced of when you walk through the most beautiful streets of cozy and warm Prague. It is in the Czech capital that one of the most beautiful cathedrals in Europe – St. Vitus Cathedral is located. The cathedral has built for 600 years, so it absorbed all the best of the various eras of architecture.