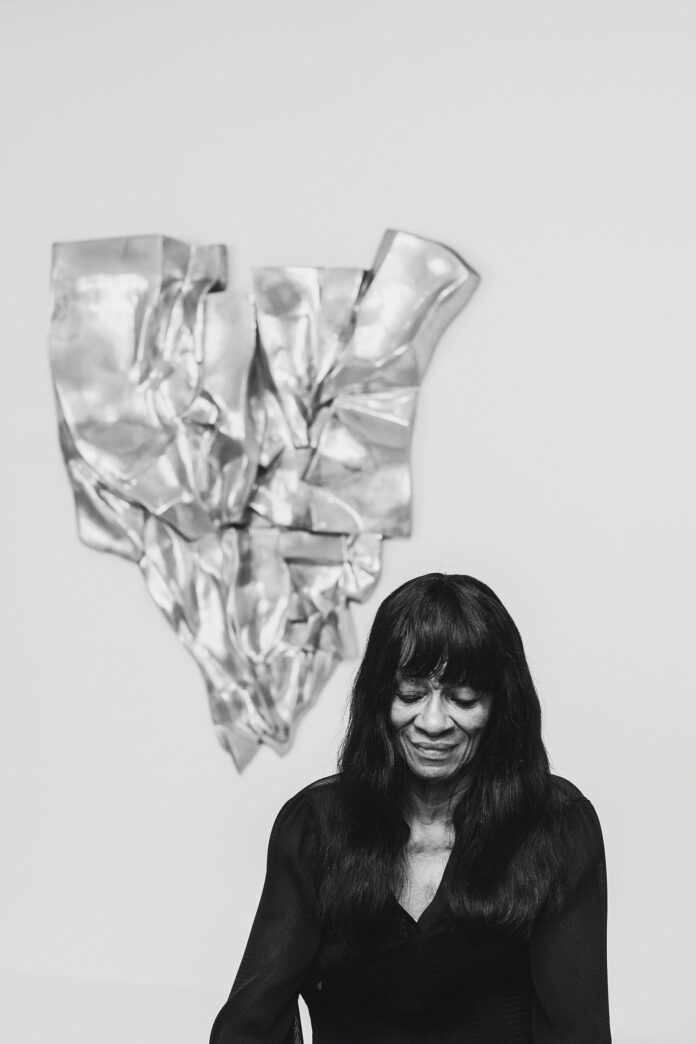 The US sculptor, poet and historical novelist Barbara Chase-Riboud has had an incredible career spanning seven decades. Her breakout moment as a visual artist came in 1957, when she participated in the first Festival of Two Worlds in Spoleto, Italy. Chase-Riboud learned the traditional technique of lost-wax bronze casting, which she has incorporated into her distinctive, hybrid approach to abstract sculpture, characterised by an interplay between folds of materials and a deep engagement with history.

Travel and a fascination with powerful women have shaped the way Chase-Riboud sees the world, as exemplified by her series of sculptures dedicated to the Egyptian queen Cleopatra and a new monumental work inspired by the dancer and civil rights activist, Josephine Baker. La Musica Josephine Red/Black (2021) makes its premiere in the artist’s first major UK retrospective, at London’s Serpentine North Gallery, among more than 30 large-scale sculptures and works on paper. Here, Chase-Riboud discusses her creative practice as an “accidental historian”, upending the past to make sense of the present.

The Art Newspaper: To fold a line is a gesture that opens a new space. Could you describe the concept of the fold in your sculptures and how it has informed an individual language of abstraction in your work?

Barbara Chase-Riboud: The fold has two elements to it. One is intellectual, the other is material. They come together instinctively because I can manage a material that I have complete control over. These two things work together. Working with varied materials means you must make an interaction between them, which is also a form of poetry when it works. It is immensely powerful.

There is also the question of hybridity in your process and work. I am curious about how you found your own voice within the formality of sculptural tradition and in rejecting that to think of sculpture anew.

The intellectual part came because of the manual part. If I were unable to manipulate the wax the way I do, there would be no work, meaning that the technique here is the message. I learned how to cast in wax in the 1950s from Italian workers in a little foundry. I had an incredibly good grounding in what I could do, what I could not do, and what I was going to do myself.

How did you navigate arriving in Europe in the late 1950s? You showed at the first Spoleto festival in 1957 and worked in the Italian film industry to support yourself, while remaining committed to your art practice.

It was an incredible piece of luck that I was invited to the first Spoleto festival. I had no business being there because I was a nobody, but they decided that they were going to show Adam and Eve, which is my first large-size bronze. This was my introduction into the European art world, which was incredible, and I took advantage of it. I met so many people who later came back into my life at certain points. But this was also an historic moment for Modernism in Europe and in the world. I was just following my nose. I wasn’t saying much. I was listening and looking and meeting people. What can I say? I didn’t know what I was doing, but I was doing it anyway.

Memory plays an important part in your practice, both material and human. How has a continuity between them informed your work as a sculptor, poet and novelist?

It is not only a question of memory and history in my work, but it is also a question of poetry and how all three come together at the same time. The historic aspect took over early on and influenced my whole attitude towards art, poetry and literature, because I am also an accidental historian, which happened in the middle of my career. It was only after I had discovered this enormous plane of the historical that I took this material and brought it back to sculpture. When I started my series, The Malcolm X Steles (1969), I was already at the point that I was making history and not sculpture.

Travel has helped to shape how you see the world. What advice would you give a young artist looking to broaden their horizons?

You can’t travel like I travelled 50 years ago. I was in Egypt alone. There were no tours and only Egyptians. You cannot do that anymore and it’s hard to travel to places and really feel like you’re alone, or that you are engaging with the people of the country. The only thing I can tell young artists is even though they are going to run into all kinds of tourists, they ought to go. They should go as far away as they can to allow a chance to understand their own position in the world and have appreciation for the rest of the world, because Western civilisation isn’t all that there is.

How are you engaging with current debates around the return of non-Western artefacts in museums, particularly the Benin Bronzes, given that you work with this loaded and historic material?

My current show at the Serpentine has come at a good time for debate, not just for younger audiences but also wider communities who are realising that while European art is historic, it belongs not only to Europe but to the rest of the world. Certainly, it belongs to the brown and Black cultures of the world. The West has been taking from other cultures for centuries, so this disruption that’s happening is a very good thing. It puts people in their rightful places and opens up a world that is much vaster than it was, say, 50 years ago.

A Woman Bought a Pile of Cheap Costume Jewelry Online. Turns Out It Contained a Rare Viking-Era Gold Ring