Home News Manifesta 14 Hits the Mark With a Show that Probes Kosovo’s Turbulent... 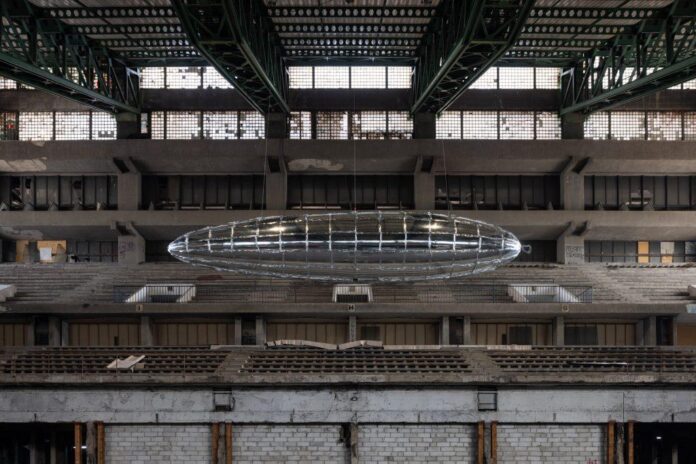 “Is it a sin that I have been born as Albanian in Kosova?” Driton Hajredini asks a Catholic priest from the concealed darkness of a confession booth. Born in Prishtina, Kosovo’s capital, Hajredini is, as he tells the priest, a Muslim. Might this man of a Christian God clarify why he and his fellow Kosovars are condemned to live as second-class citizens within Europe? Are they being punished?

The question posed by Hajredini in his video work resounds across Manifesta 14, Europe’s nomadic biennial, which opened in Prishtina on July 22. The art-world can be blasé about travel: we complain about delayed flights, disrupted nights, iffy coffee, and verbose press briefings. We wish to travel less, for the environment and our mental health.

It is different for our colleagues in Kosovo. A costly, time-consuming, and humiliating visa process is required for travel into the European Union. Not all applications are successful. So we may visit them, but seldom may they come to us. This asymmetry is given a personal edge in Estonian artist Luz Broto’s key-cutting kiosk: Through posters around the city, Broto invites us to “meet a local—swap a copy of your house key.” The performative action is a gesture of trust, while offering the grim security that, as things stand, our house keys are in safe hands thanks to such travel restrictions. 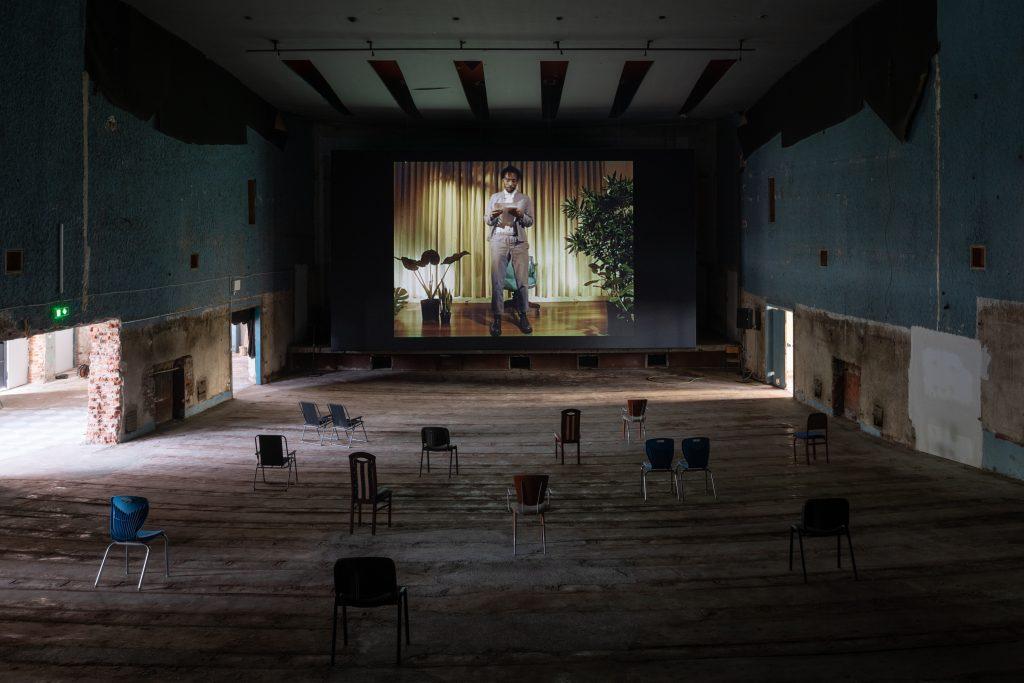 Manifesta no longer does curators. As a “creative mediator” of the artistic program, the Berlin-based Australian Catherine Nichols has provided this show an unwieldy title: “It matters what worlds world worlds: how to tell stories otherwise.” About this, my first thought is: I feel bad for whoever had to translate that into Albanian. My second thought is: let’s have a moratorium on Donna Haraway-derived exhibition concepts. Once you pick it apart to the point of comprehensibility, the theme is, nevertheless, exceedingly apt. Nothing is neutral, so we must be vigilant about what old structures we use to build a new city, a new story, or a new civilization.

Each of the 25 locations selected for Manifesta 14 has specific resonance for this young country. (Kosovo is doubly youthful: independent from Serbia since 2008, more than half those living in its capital are under 25.) These venues and their history frequently overshadow the exhibitions, raising the question of what role art plays in a biennial increasingly focused on the built environment.

Two venues date from the Ottoman period; one of them is a lovely wooden house (now Pristina’s Ethnographic Museum) that shows playful, experimental photographs from a 19th century Albanian photo studio. Elsewhere, a stolid chunk of 1940s Austro-Hungarian architecture houses the much-depleted National Museum. Here, Mumbai-based Sahej Rahal explores fiction and fantasy as tools for constructing alternative histories: a poignant subject for Kosovars, who have lost records and artifacts over years of war and oppression. 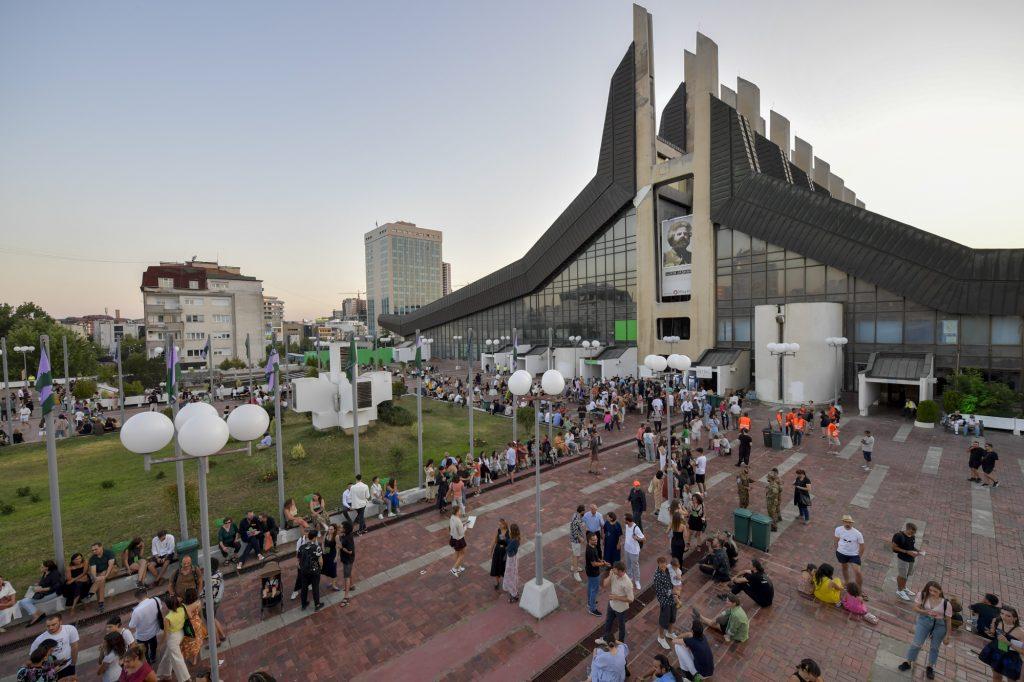 The loftiest venues date from the Yugoslav era, among them the spectacular, many-domed fantasy modernism of Andrija Mutnjaković’s National Library building, and the dilapidated Palace of Youth and Sports, a vast structure that throws huge concrete wings into the air like a vulture. This so-called palace houses a futuristic silver inflatable by the acclaimed Korean artist Lee Bul. Installed in London’s Hayward Gallery four years ago, Bul’s cyborg Zeppelin dominates the space in Prishtina. Suspended within the building’s dramatic indoor stadium, it now looks as though a child has let slip a generously proportioned helium balloon.

For the opening ceremony last Saturday, July 23, Prishtina’s arty youth crammed into the Red Hall for a performance by Astrit Ismaili. A child prodigy who performed at local festivals in Kosovo, this was a spectacular homecoming for which Ismaili was joined onstage by their sister (the other half of the mini pop duo) for the finale. To have a non-binary performer launch the biennial was significant in a country where LGBTQI+ rights remain an issue. Performing with twisted metal structures that responded as a musical instrument to the moving bodies of the ensemble, the theme of human-machine hybridity felt on point for the location. 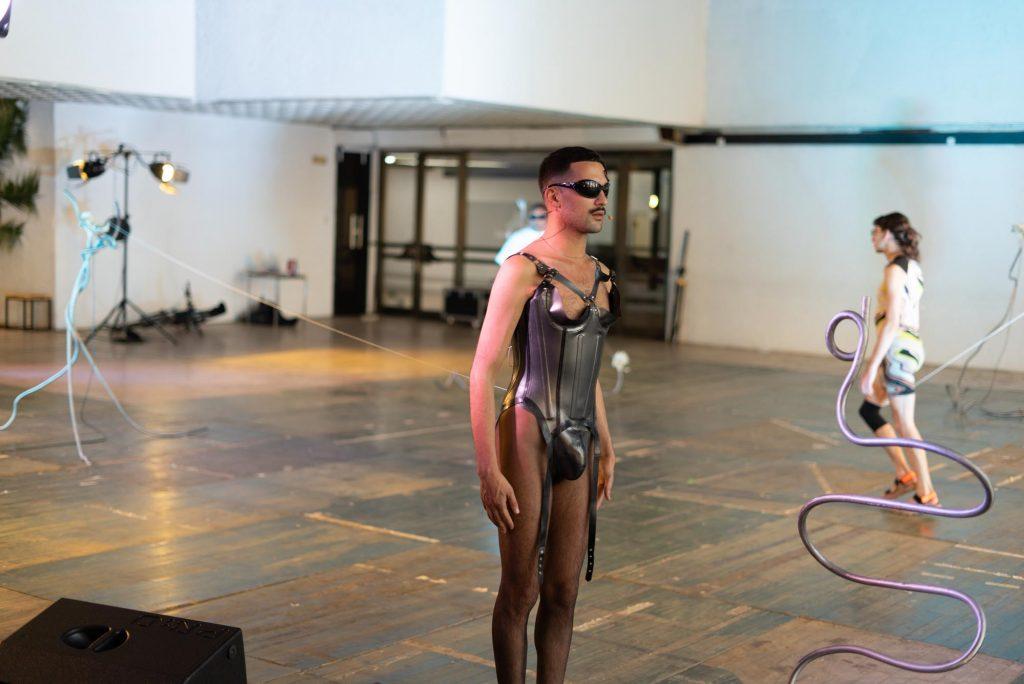 This was particularly striking when seen after watching Marta Popivoda’s outstanding 2013 video work Yugoslavia, How Ideology Moved Our Collective Body. Popivoda’s journey through recent Balkan history is assembled from Yugoslavian propaganda films and news footage of national celebrations, sporting displays, political rallies, and protests. There’s something chillingly seductive about the martial anthems and mass choreography: human bodies move together like a perfect machine. Through these historic documents, Popivoda tries to identify the moment the individual separates from the social group, and the relationship between the body and the state. “The crowd is moving, but what moves the crowd?” she asks. Though an older work, it was nevertheless my highlight of the biennial.

Manifesta’s central exhibition occupies seven floors of the Grand Hotel Prishtina. Once five-starred, it is grand now in name alone. Taking to the roof, Petrit Halilaj, who is originally from Kosovo, has transformed the defunct signage from the hotel’s façade into a new light display. The re-arranged lettering now reads in Albanian: “When the sun goes away, we paint the sky.” It is surrounded by stars that leap and tumble around the building. Halilaj, who in 2013 became the first artist to represent Kosovo at the Venice Biennale, has jokingly informed Prishtina’s mayor Përparim Rama that he has gifted his city the world’s first 27-star hotel. 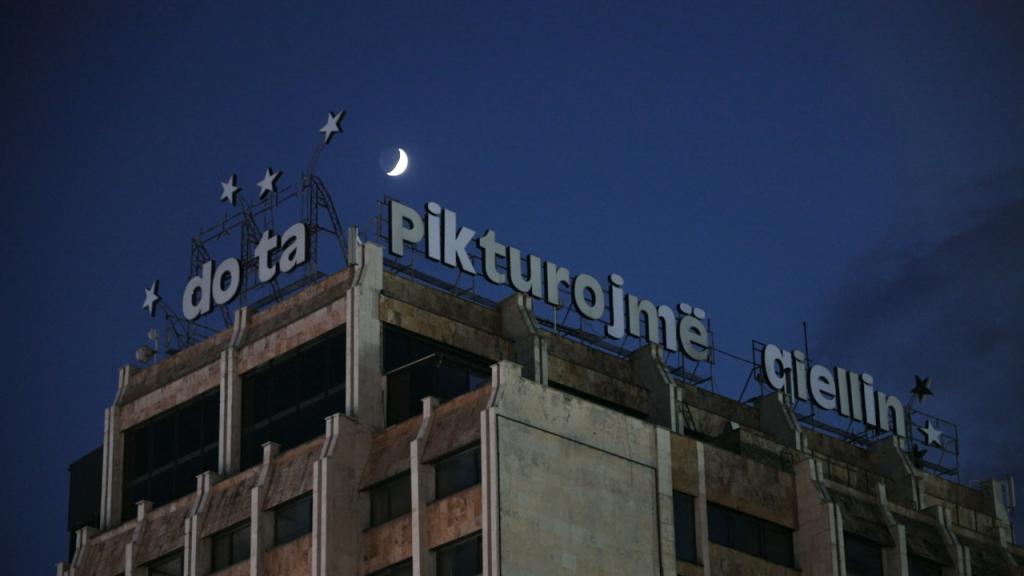 The Grand’s bars, gyms, and function rooms are still in-use, but the building is associated with a dark episode in Kosovar history. At the end of the Kosovo War, which lasted from 1989 to 1999, the now-defunct Albania Rilindja newspaper reported that prison and torture chambers, as well as women’s clothing, had been found in the hotel’s basement spaces. Here, the question of what old structures you use to build a new country is literal in an extreme sense: how does one address such a monolith in the city center?

A significant strand here and at the National Gallery explores war crimes and torture, and the post-conflict reconstruction in a wider sense. Tuan Andrew Nguyen, based in Ho Chi Minh City, presents a two-screen The Sounds of Cannons, Familiar Like Sad Refrains (2021) that is narrated from the perspective of an unexploded missile discovered by a Vietnamese farmer. Jelena Jureša’s Aphasie (Act Three), which describes a notorious Serbian paramilitary slipping into a post-war career as a DJ, is almost unbearably painful, as is a performance by Selma Selman, in which the artist (who is of Roma origin) screams the phrase “You have no idea” to the point of vocal damage. 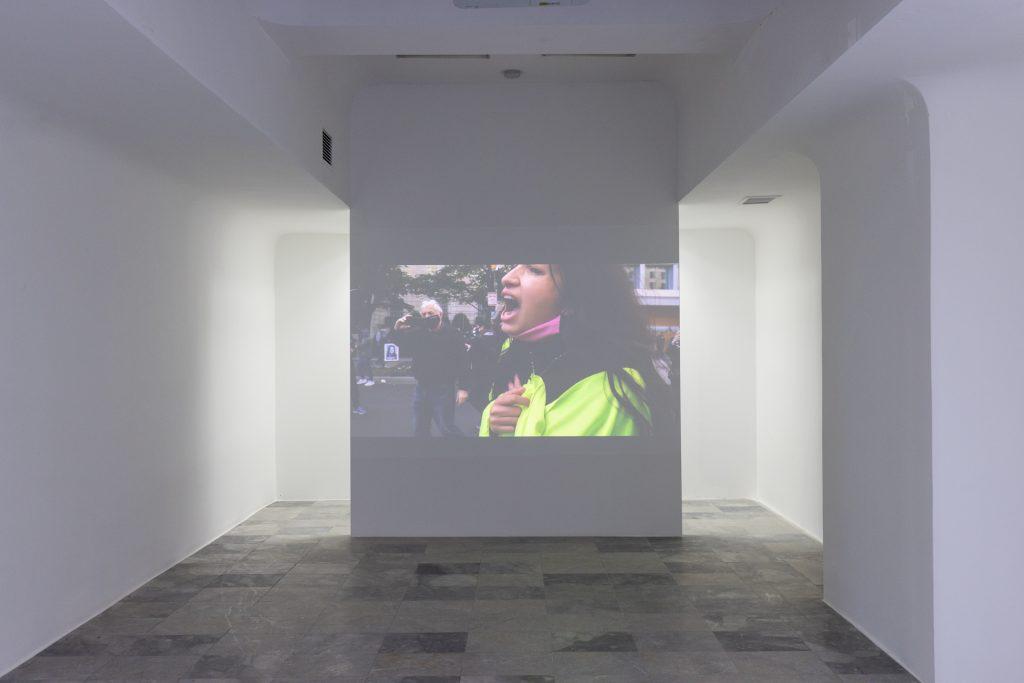 During the 1990s, with conflict across the territories of former Yugoslavia, Kosovo’s Albanian-speaking majority was excluded from public institutions by the Serbian regime. A parallel school system evolved in private homes. Today, children educated in this system are Kosovo’s politicians, diplomats, lawyers, doctors, and teachers. The most touching Manifesta venue is also one of the most humble: Hertica School House, an unfinished family home through which 1300 children passed each day, to be schooled in two shifts. As I was leaving, three of the old teachers turned up with the owner of the house, revisiting their own history.

Of the 102 artists shown, some 40 are of Kosovar origin, and two thirds in total from the wider Balkan region. Among them are painters from the Yugoslavian era. Fabulous psychedelic works from the 1960s by Nusret Salihamixhiqi, and a selection of intense, characterful portraits of women by the late Alije Vokshi shone beside work by younger artists, some of whom were perhaps a little too green. The local focus comes in response to Kosovo’s ongoing isolation: Manifesta’s director Hedwig Fijen is outspoken about the visa situation for Kosovars. If Kosovo’s artists can’t come to Europe, then Manifesta aims to bring Europe to Kosovo. As ever, this raises questions about who the biennial is for: visiting arts professionals? Tourists? Locals? A handful of international star-turns, such as Bul’s zeppelin, suggests serious consideration, at least, has been given to the needs of the latter.