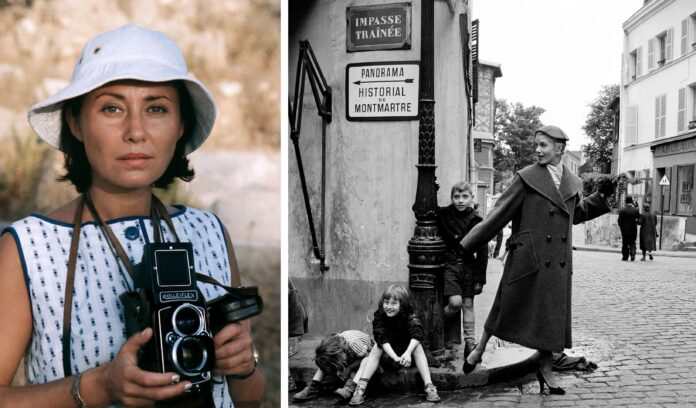 The photographer Marilyn Stafford, who died on 2 January, aged 97, attributed much of her success to serendipity: being in the right place at the right time. “I think there are leprechauns or little guardian angels hovering over me,” she once said.

But many of the happy chances that marked her 40-year international career as a street photographer, portraitist and fashion photographer, were brought to her by her gregarious nature and adventurous spirit. Three decades after her retirement, she and her photographs were rediscovered, and last year made the subject of a retrospective in Brighton and an accompanying book, Marilyn Stafford: A Life in Photography (2021).

Born Marilyn Gerson in Cleveland, Ohio, in 1925, she moved to New York City in the postwar years to work as an actress. To pay her rent, she picked up her first photographic job as an assistant to the fashion photographer Francesco Scavullo.

Her singing talents brought her a gig in Paris at the “in” cabaret club Chez Carrère, where she met Robert Capa, and later Henri Cartier-Bresson, co-founders of the Magnum photography agency. Capa invited her to work with him but he was a war photographer and war was not her thing. Cartier-Bresson invited her to work with him as a street photographer and it was under his guidance that she honed her skills.

Stafford’s portrait subjects ranged from the scientist Albert Einstein to the singer Edith Piaf, the supermodel Twiggy to the actress Sharon Tate, the actor Lee Marvin to the author Alberto Moravia. They were photographed not in a studio but at home or out and about, having fun.

As a fashion photographer she pioneered ready-to-wear outdoor shoots in the streets of Paris. As a news photographer she captured the suffering of refugee women and children in Tunisia, fleeing the brutality of the Franco-Algerian war of independence. As a social and political commentator she photographed the daily life of Lebanese villagers, cows being milked in an Indian dairy, Indira Ghandi on the campaign trail. Her style—unposed, deceptively casual—masked a sharp, well-trained eye for composition and form.

From the late 1940s into the 1980s she lived and photographed in New York, Paris, Rome, Beirut, and London, for some years with the British journalist Robin Stafford, her second husband. In London, she co-founded her own agency with the French photographer Michel Arnaud specialising in international fashion. Fashion was her bread-and-butter, but social observation was her art, from the slum kids of Paris to rape victims in Bengal, to fruit vendors and tinsmiths at work in a Tripoli market. “Photography when used honestly is a witness, a powerful record of human experience,” she said in a recent interview.

When she retired in the 1980s her work, published in international magazines and newspapers, slipped out of view. “Photographers don’t grow old, they just grow out of focus,” she commented with a characteristically wry humour. But recent years have seen a rediscovery and reappraisal of her status as a pioneering artist, working globally across a range of photographic genres.

In 2017 the Marilyn Stafford FotoReportage Award was created, with support from Nikon, offering a £2,000 annual grant for women documentary photographers anywhere in the world working on social, environmental, economic or cultural projects. The retrospective held in Brighton, near her Sussex home, last year and the publication of Marilyn Stafford: A Life in Photography, was curated by Nina Emett who, as it happens, is the niece of a former colleague.

“Serendipity raised its pretty head”, Stafford said. “It was meant to be.”