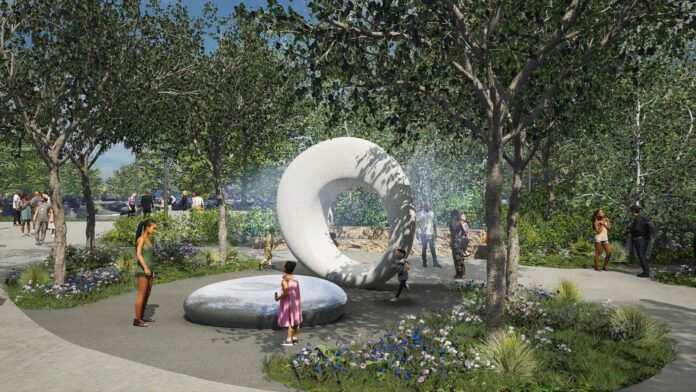 When the $830m Obama Presidential Center opens to the public on Chicago’s South Side in 2025, one of its most distinctive features will be a sculptural commission by artist Maya Lin in honour of former president Barack Obama’s late mother, Ann Dunham.

Positioned within an outdoor area near the centre’s north entryway that will be known as the Ann Dunham Water Garden and designed to optimise rest and reflection, the sculpture Seeing Through the Universe will consist of an upright oculus form that produces a mist and an adjacent orb laid flat, which will function as a gently cascading fountain. The latter element of the design is reminiscent of Lin’s public sculpture on the Yale University campus, The Women’s Table (1993), which commemorated the university beginning to admit female students in 1969.

“I could picture [my mother] sitting on one of the benches on a nice summer afternoon, smiling and watching a bunch of kids running through the fountain, and I thought that would capture who she was as well as just about anything else,” Obama said of Lin’s sculpture in a statement.

Lin is described as one of former president Obama’s favourite artists in a press release announcing the commission. Her outdoor commissions and monuments include the Vietnam War Memorial in Washington, DC and the Civil Rights Memorial in Montgomery, Alabama, which were both awarded the National Medal of the Arts (in 2009) and the Presidential Medal of Freedom (in 2016) by then-president Obama. At the time of receiving the latter honour, Lin praised Obama in particular for his efforts to combat climate change.

Construction on the Obama Presidential Center began in September 2021. When completed it will include a museum building, a new branch of the Chicago public library and an indoor winter garden, as well as a public plaza and parklands—including the Ann Dunham Water Garden with Lin’s sculpture—within the footprint of the 547-acre Jackson Park. Also located within the sprawling Jackson Park is the city’s Museum of Science and Industry, and just to the south is artist Theaster Gates’s nonprofit Stony Island Arts Bank.

The lead architects for the centre are New York-based Tod Williams Billie Tsien Architects, whose previous projects include the Barnes Foundation in Philadelphia, the Logan Center for the Arts at the University of Chicago, the Phoenix Art Museum and the American Folk Art Museum building demolished to make way for the Museum of Modern Art’s expansion in New York.

After a Decade-Long Slide, the Chinese Art Market Is on the Upswing Again, Generating $7.4 Billion in Global Sales in 2021