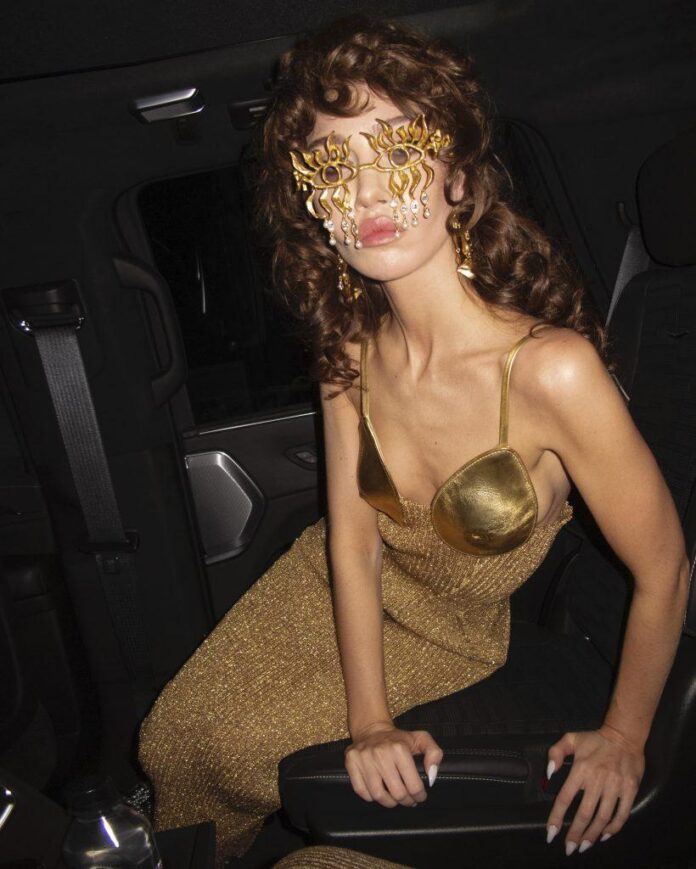 Ivett has seen some things as a dealer on the Reno Hilton casino floor, but she continues to give it her all when she shows up for her shift every night, ready for the jackpot in tall swipes of blue eye shadow that give her crimson-velvet-and-gold-brocade uniform a little extra sparkle.

Jeff, meanwhile, will always give it to you straight. He looks you right in the eye, a lit cigarette between his fingers, sporting his Arby’s nametag on his beige polyester suit topped off with a bolo tie, which he wears with pride and a spotless white cowboy hat.

Though Jeff is not actually Jeff, nor is Ivett really Ivett. Just like Claudia, Lisa, Lilian, Michael, and Big Kat, they are all in fact the British, Los Angeles-based photographer, filmmaker, and performance artist Nadia Lee Cohen (b. 1992)—or rather, two of her 20-odd fictive personas, each a living relic of ca.-1970 America. 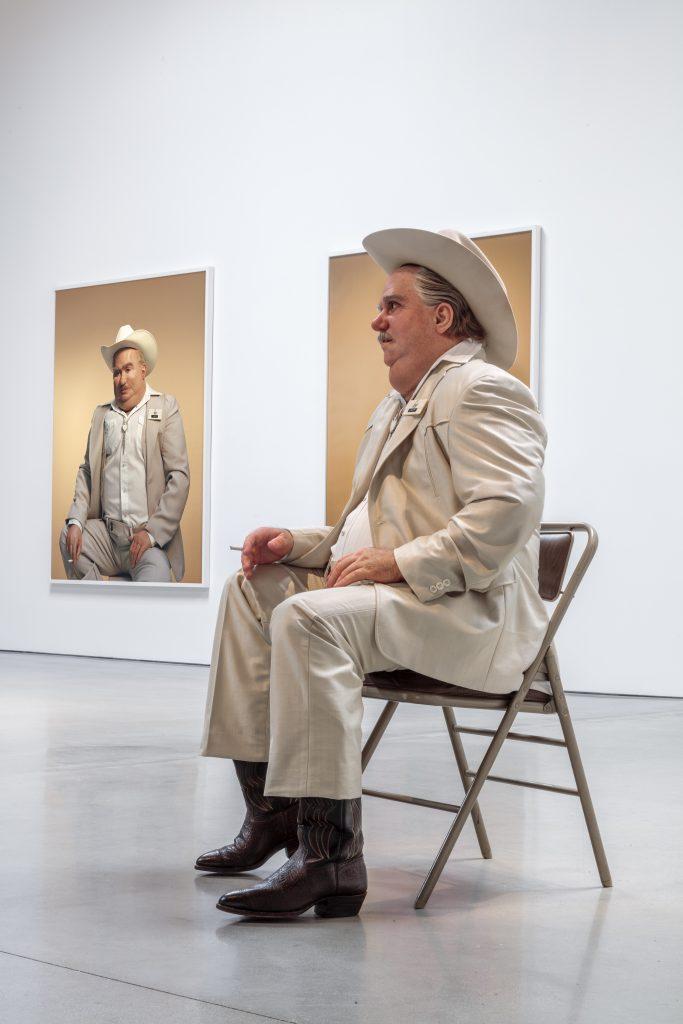 Lee Cohen follows the tradition of Cindy Sherman, Gillian Wearing, and Frida Kahlo, conceptualists who saw the candor that a self portrait bluffs with as an invitation to become someone else entirely. But having shot music videos with Tyler the Creator and Kali Uchis, modeled for Schiaparelli and Rihanna’s Savage X Fenty, and conceptualized campaigns for brands from Balenciaga to Kim Kardashian’s Skims, she is taking her art to a new, decidedly more plastic dimension.

Melahn Frierson, the director of Jeffrey Deitch’s Los Angeles gallery, first became aware of Nadia’s work a few years ago, when she saw the artist’s music video for A$AP Rocky’s . “I was completely blown away by her aesthetic vision,” she said. “The high-level cinematography, set design, humor, and insane costumes woke something inside of me. It was basically love at first sight, and I’ve been closely following her career ever since.”

Deitch’s L.A. gallery is now staging Lee Cohen’s debut exhibition in the U.S.—“HELLO, My Name Is” (until August 13)—with the artist’s photographs selling for up to $15,000 each. 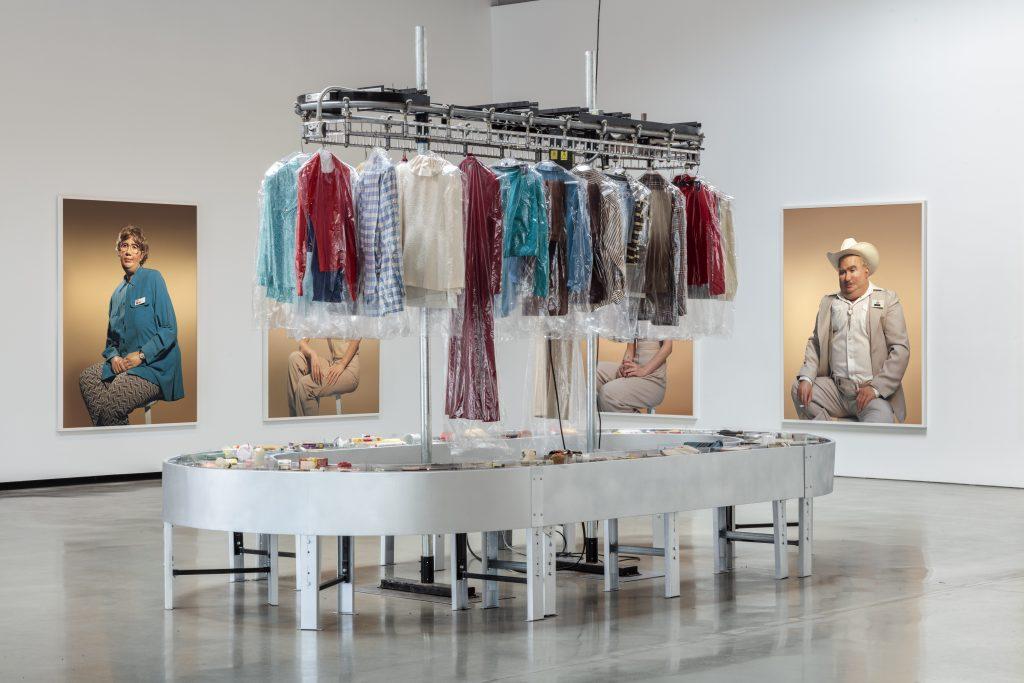 An installation view of “HELLO, My Name Is.” Photo: Joshua and Charles White. Courtesy of the artist and Jeffrey Deitch, Los Angeles.

You’ll find much more than photos, however. In the first room, a dry cleaner’s garment conveyor displays costumes in plastic bags, as worn by a selection of characters from Lee Cohen’s two sold-out monographs, and . Below it, a mechanical belt carries a tray for each figure, containing their name tags and personal effects (for Jeff, whose eerily lifelike rubber figure sits in a folding chair nearby: a Nixon-Agnew promotional pin, a single pilsener, a snack bag filled with crispy strips of bacon, iron pills, a , a pack of Camels).

Lee Cohen’s photo-based narratives draw a pointed arrow from products to personality, confirming that our consumer identity is the most detailed one we can disclose. Her commercial work feeds directly into her art, and vice versa; she always engages the same crew, including her longtime art director and prop stylist Brittany Porter. 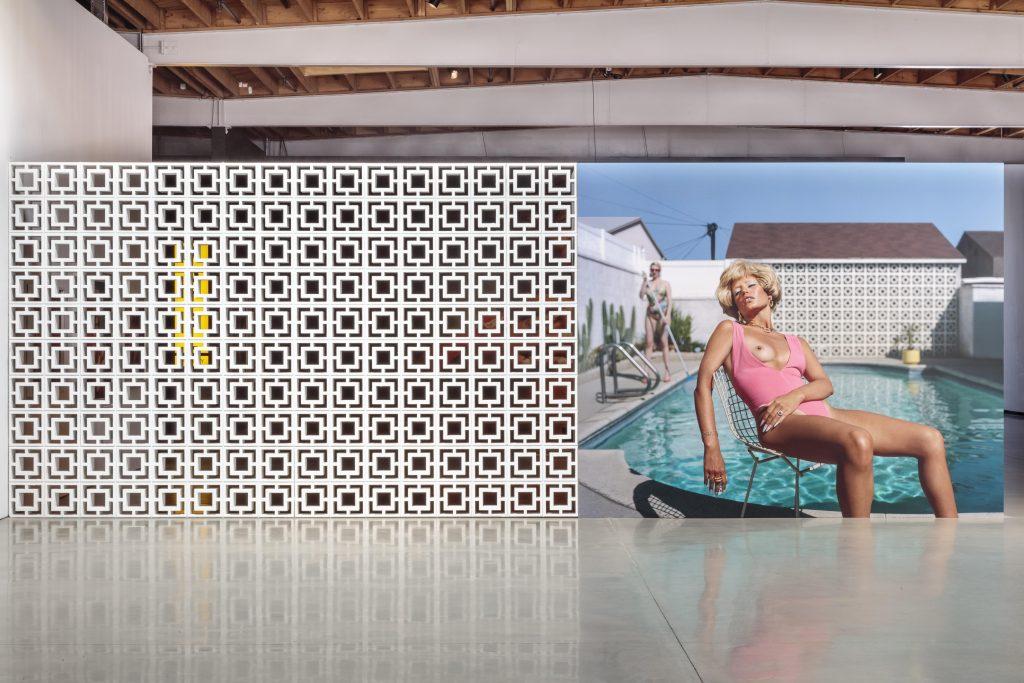 An installation view of “HELLO, My Name Is.” Photo: Joshua and Charles White. Courtesy of the artist and Jeffrey Deitch, Los Angeles.

In “HELLO, My Name Is” a ca.-1960 sci-fi fashion film with heavily self-tanned beachgoers that she made for the brand GCDS plays on a space-age TV. Around the corner there’s a wall of white concrete breeze blocks, a reproduction of the one in an over-size portrait beside it, in which a Georgia May Jagger, done up by Lee Cohen, dozes off next to a glistening North Hollywood swimming pool.

The same lacy wall served as a backdrop for Kim Kardashian in a recent Skims ad, and for another Lee Cohen character, Carole, whose wax reproduction has melted through the slats of her plastic chaise lounge and onto the gallery’s polished-concrete floors.

“I started as a photographer who was heavily influenced by film, and struck by cinematic photography,” Lee Cohen said. “I loved its ability to replicate the narrative element of cinema—that it can be humorous, dark, powerful, and tell an entire story in a single frame. I struggle to create anything without narrative.”

Raised on a farm in the English countryside, amid “mud, fields, cows, and horse shit,” Lee Cohen’s childhood was spent “roaming around fields looking for fossils or saving sick baby rabbits,” she said. She was surrounded by artists: her mother painted some of the animals starring in the 1978 cartoon , and her uncle was a cartoonist, tapped to be ‘s caricaturist in the early 1960s. 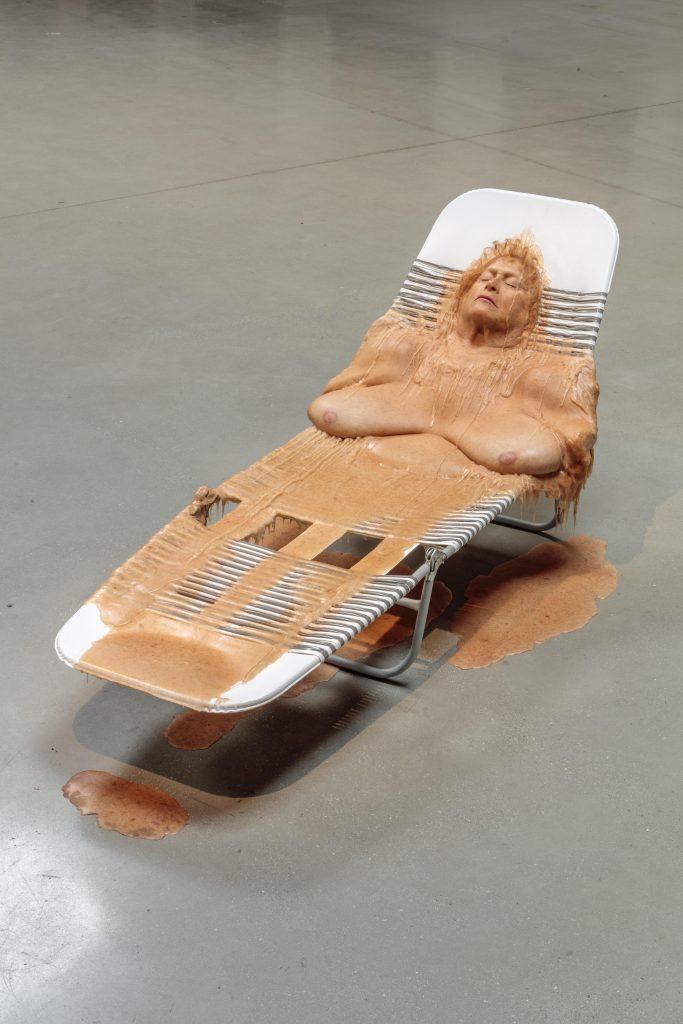 Spending her formative years in creative, pastoral surroundings afforded her a “feral kind of freedom,” she said. “I think growing up around vast stretches of a predominantly green and brown palette may be the reason for my obsession with artifice and bold color.”

Lee Cohen went on to study photography at the London College of Fashion, traveling to L.A. for the first time to complete her final project. “I photographed everything completely illegally and found models in sushi restaurants, in the street, or on Instagram,” she said.

She spent the next several years photographing models, celebrities (see ’s Alexa Demie), collaborators, and friends in L.A., London, and New York for , a series she describes as “essentially film stills from films that do not exist.” Behind-the-scenes footage from these shoots plays on a darkened wall at Deitch, with a wall clock displaying the local time above each screen. 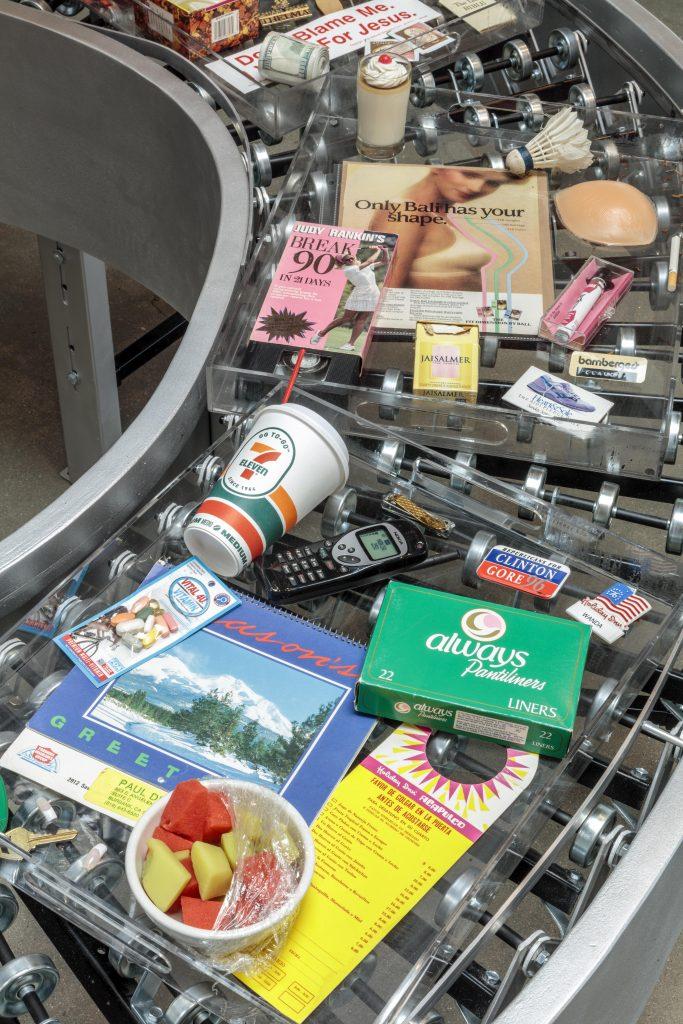 The personal effects of a Lee Cohen character. Photo: Joshua and Charles White. Courtesy of the artist and Jeffrey Deitch, Los Angeles.

“I had a conversation with Jeffrey very early on about the importance of the exhibition not feeling like a ‘photo show,’ Lee Cohen said. “This was the first opportunity I had to show the work in a three-dimensional way, where people could experience the objects, characters, and Los Angeles architecture that influenced me.”

“Nadia conceived of the exhibition like a movie,” said Deitch. “Visitors feel like they are participants in her narrative.”

And there have been many visitors, and will be more: the show was extended to accommodate demand, and it is set to travel outside of L.A.

On a recent weekday afternoon, in the middle of a heat wave, the gallery was packed with groups of teenagers and young women. They roamed from room to room, snapping selfies and photos of each other in front of the works, taking pleasure and time in a way not often seen in contemporary art galleries. 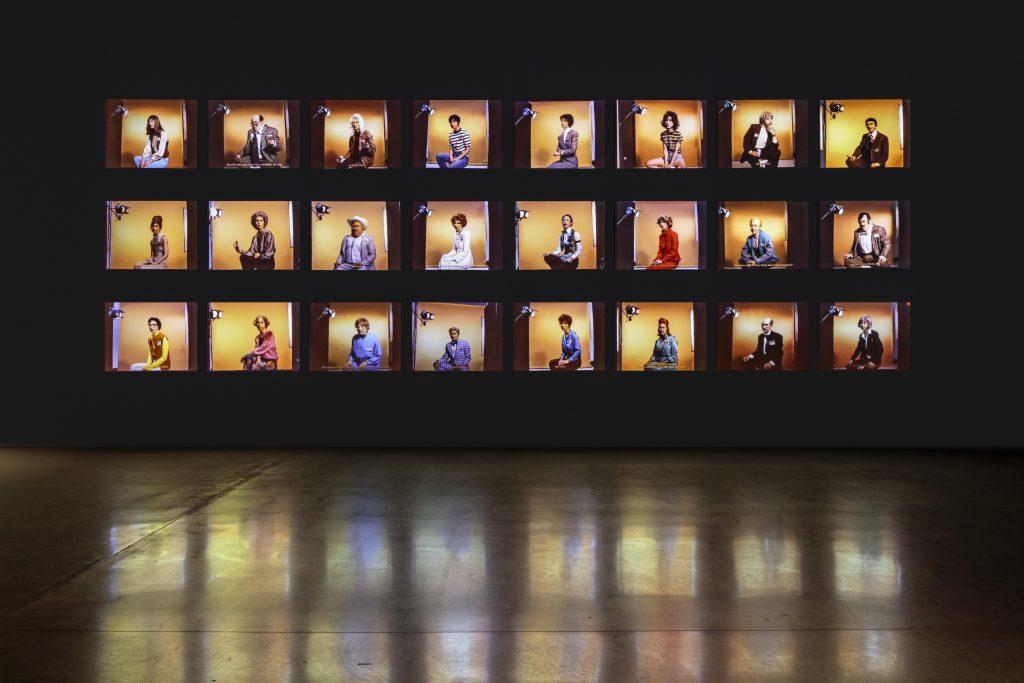 The theater at “HELLO, My Name Is.” Photo: Joshua and Charles White. Courtesy of the artist and Jeffrey Deitch, Los Angeles.

“There’s a great level of humor and playfulness to so much of what Nadia does,” said Frierson. She has often heard laugher coming from the exhibition’s theater room, which has 24 televisions, each with Nadia playing out a different character in full-on prosthetics and wigs—like L Ressler, her sterling saleswoman, immaculately groomed, made up, and bejeweled on the Sears sales floor.

L Ressler wears a silk blouse tucked into belted slacks (in her tray: tortoiseshell hair clips, Nokia mobile phone, cafeteria bagel, credit card). She tells anyone and everyone willing to listen: “I always say the same thing: Buy your umbrella before it rains. I’ve been married twenty years and every day I dress for my divorce.”

Deitch noted, “There is an uncanny connection between Nadia’s characters and real people we have all encountered.” Indeed, despite their main-character energy, and despite their nametags, these figures are the uncredited, supporting characters in our own lives.

“The idea was to be able to look at them, hear them speak,” said Lee Cohen.

The Met Now Boasts the World’s Largest Collection of Philip Guston’s Work, Thanks to a 220-Piece Gift by the Artist’s Daughter