Home News Meet Sunday Nobody, the Meme Artist Who Entombed a Bag of Flamin’... 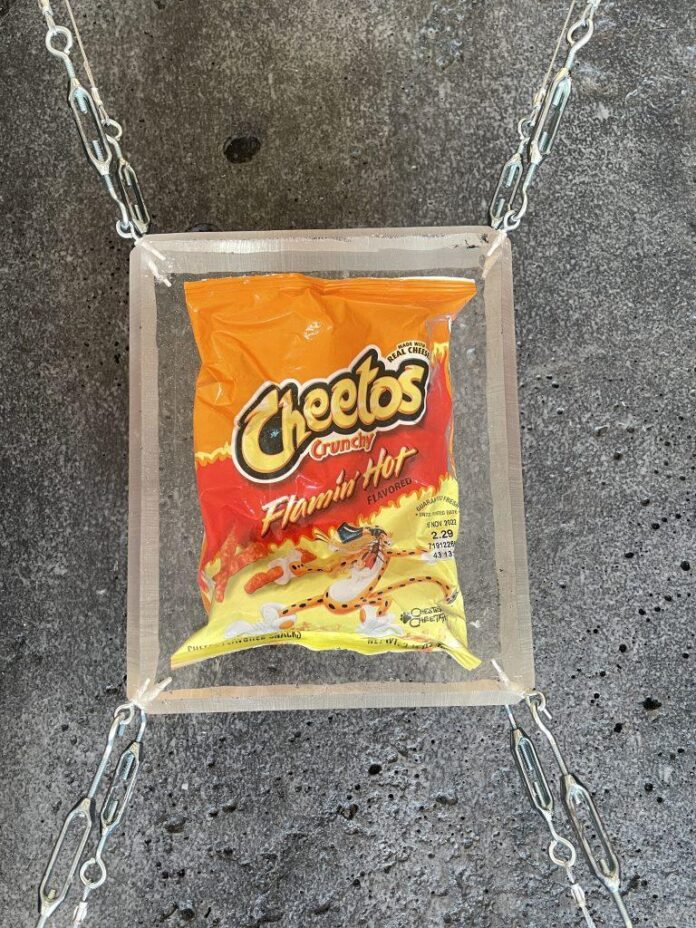 The project is almost profound its absurdity: a bag of Flamin’ Hot Cheetos encased in resin and suspended by wires inside a 3,000-pound concrete sarcophagus, buried outside Seattle with a plaque instructing future archaeologists to open it in 10,000 years.

The work, which cost $1,200 to produce, is the latest effort from the artist known as Sunday Nobody. A 28-year-old motion graphics designer at a Seattle ad agency, he made his first artwork just over a year ago, kicking off a practice defined by complex, labor-intensive projects that are both deeply indebted to and embedded in internet culture.

The artist, who works primarily on nights and weekends due to his day job, prefers not to be identified by his real name. Sunday Nobody documents his creations, which typically involve an incredible amount of trial and error, in short videos to a quickly growing online following. (Despite having made just 10 posts to date, Sunday Nobody has amassed an impressive 203,000 TikTok followers and 208,000 Instagram followers.)

Sunday Nobody graduated college in 2017 with a double major in film and art, but not much faith that his education had provided him with employable skills. He spent the next two years traveling the world, until the money ran out and he landed in Seattle, living in a shed in a friend’s parents’ backyard.

He landed at the ad agency where he still works to this day, making what seemed to him a princely sum of $60,000 a year—with only $400 in rent and no student loans. (The artist fully recognizes he was in a privileged position that few aspiring artists are lucky enough to experience.)

After about two years, Sunday Nobody decided to put some of his by-then substantial savings toward an art studio, renting an old commercial truck bay with two artist friends. (The landlord, concerned the three young men would use the space to grow weed or throw raves, made them form an LLC and get business liability insurance before he approved the lease.) 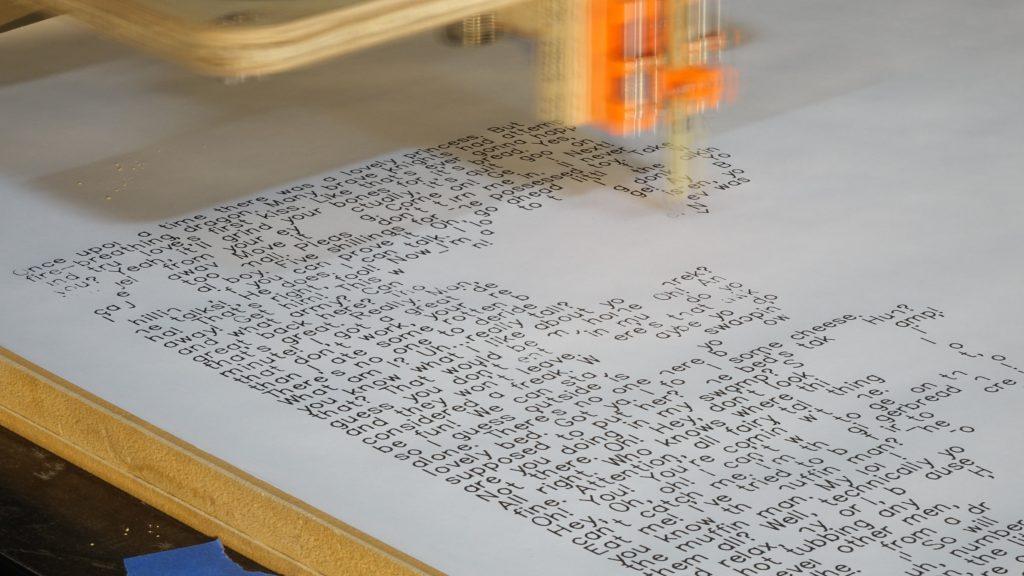 Sunday Nobody’s first project, involved getting a robot to write down the entirety of the script of the movie . Photo courtesy of the artist.

“I didn’t really know what I was going to use the space for,” Sunday Nobody said. But he had done some furniture making in the past, so decided to invest in a table saw, a jointer planer combo, and a CNC machine—the last of which cost $14,000. “It was pretty financially irresponsible! But I love tools. Oh my god, it’s my greatest weakness.”

His first project, which has been watched five million times on TikTok, grew out of experimenting with his new toys. He jerry rigged his CNC machine to hold a pen and programmed it to write out the entirety of the dialogue from the movie , which he had first manually transcribed.

“I didn’t think anyone would be interested in it other than my brothers. I spent like 30 seconds of that video telling people how I refilled a pen,” Sunday Nobody recalled. “But people on Reddit and TikTok really responded to it!”

So far, the artist’s social media following has not translated into financial success.

An $11,000 eBay sale of —Sunday Nobody’s nearly 11-by-six-foot canvas of all the moms from Pixar films hidden in a giant New York City landscape drawn with a tattoo machine—fell through. And only one of the two NFTs he’s minted on Foundation, of an analogue animated “Rick Roll” gif made from four pixelated acrylic canvases, has found a buyer, back in November 2021 for 1 ETH, then about $4,300. 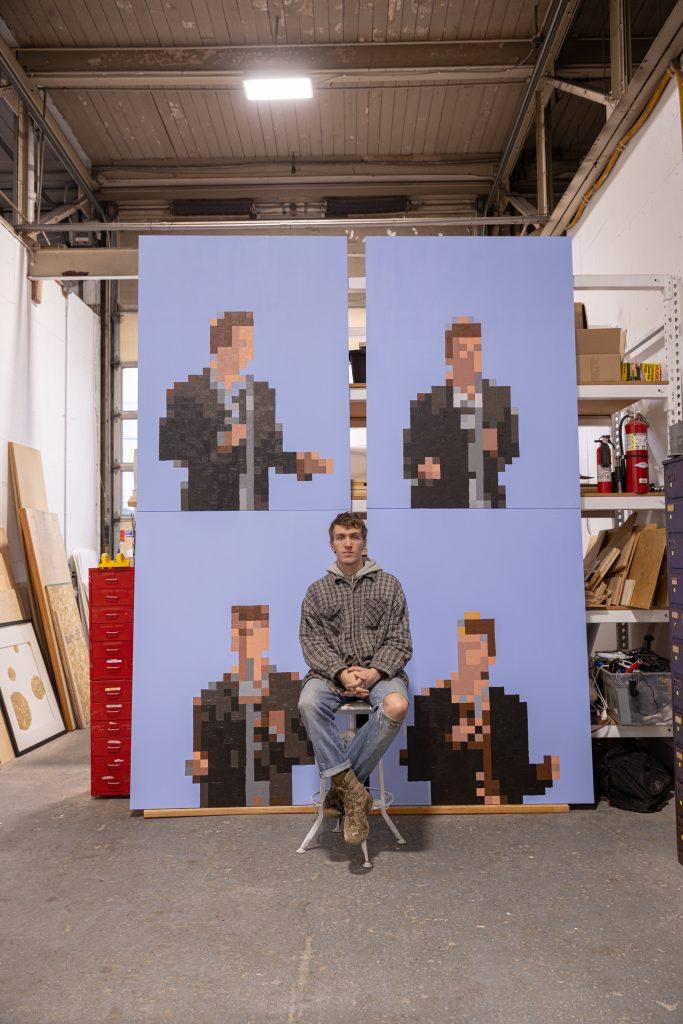 Sunday Nobody with his analogue Rick Roll gif paintings. Photo courtesy of the artist.

And when Sunday Nobody personally mailed a massive painting of a QR code that sends the viewer to a link housing the entirety of Nicolas Cage’s 2004 cult film to Kate Fowle, then director of MoMA PS1 in Queens, the museum sent it back (even though he didn’t include a return address).

Nevertheless, Sunday Nobody is satisfied with the current state of his art career, sans gallery representation or institutional support.

“The work is the reward in that I get go to the studio every day after work and make stuff,” the artist said. “My studio is a two-minute drive from my house, and rent is $660 a month plus materials. If that’s success, that’s really achievable.”

He’s also making huge waves on social media, despite the infrequency of his posts. The Cheetos sarcophagus is perhaps Sunday Nobody’s most popular piece to date, with nearly 13 million TikTok views.

The artist finds that there tends to be a generational divide in the response to the work. “The vast majority of questions I get from older people are like, ‘why Flamin’ Hot Cheetos?’ I think my generation and below embrace things without meaning or purpose. And my work is so meme-centric that it’s predominantly for digital natives,” he said. 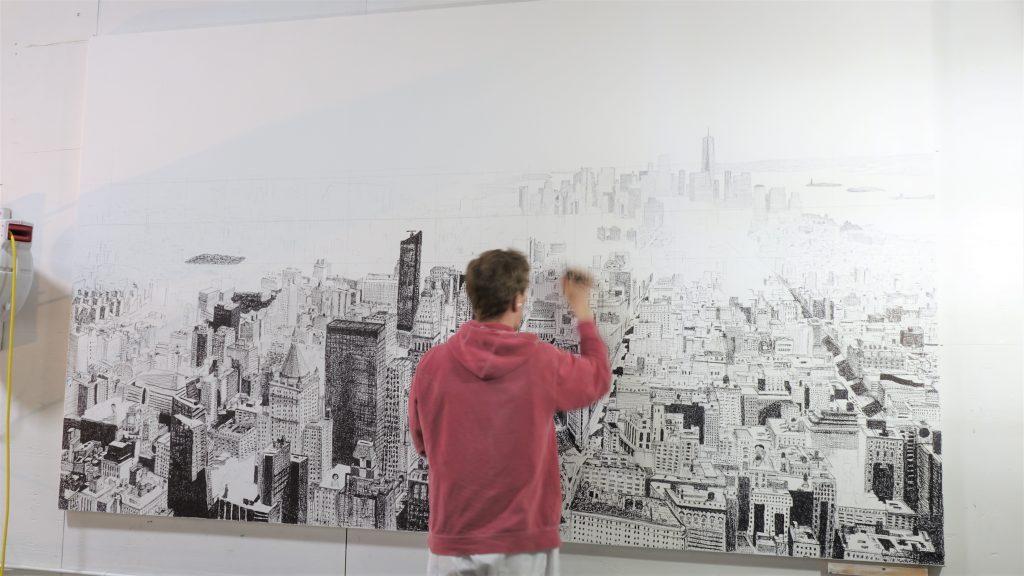 Sunday Nobody painting , hiding all of the Pixar moms in a New York city scape he painted using a tattoo machine. Photo courtesy of the artist.

It’s precisely the mundanity of Flamin’ Hot Cheetos, infamous for the powdery red-orange dust it leaves on one’s fingers, that gives the project its absurd appeal. (And no, Sunday Nobody is not sponsored by Frito-Lay—although a company rep did tell that “It’s an honorable mission to preserve Flamin’ Hot Cheetos for future generations, and we are here for it.”)

Treating this hyper-processed, “dangerously cheesy” food product with the same type of reverence that the ancient Egyptians used to bury their dead is in some ways the logical conclusion for the triviality of 21st-century culture, where the combination of social media and the 24-hour news cycle generates an endless stream of viral moments.

So sure, why not physically manifest the internet’s tongue-in-cheek veneration of a crunchy, cheesy corn puff and its too-cool cartoon cheetah mascot? Who’s to say this ode to junk food wouldn’t provide mankind 10,000 years in the future valuable insight into society in 2022? 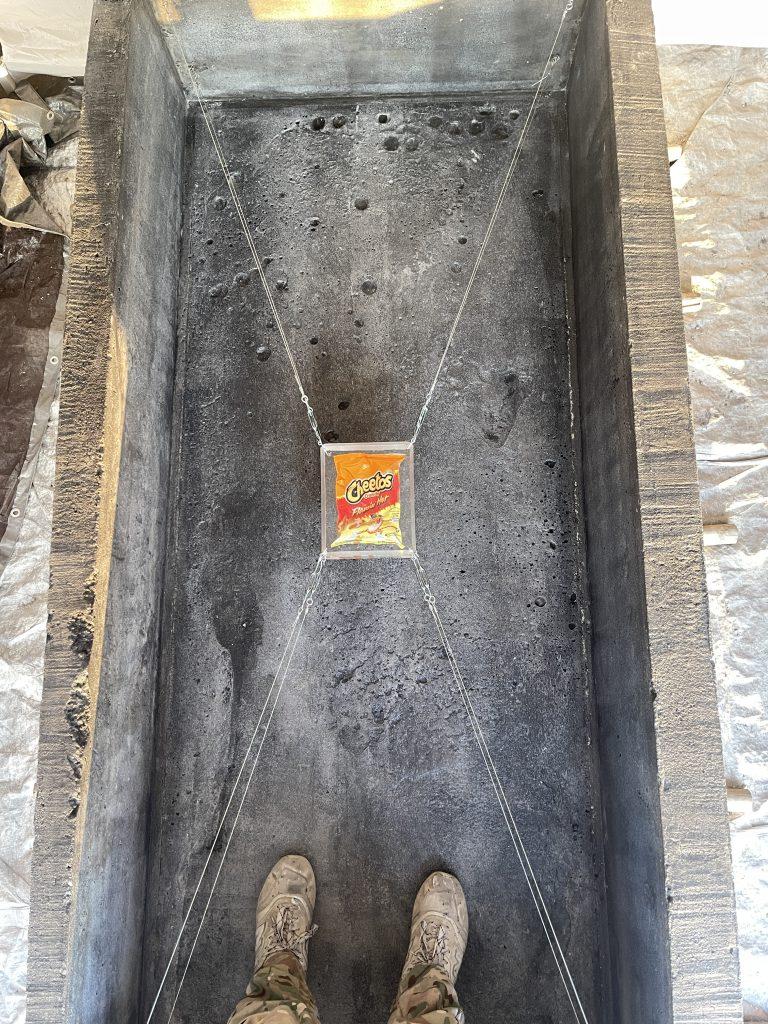 “There are things, like Shrek or Cheetos, where the internet sort of agrees that we’re lifting these objects up. They get imbued with a sense of memeness,” Sunday Nobody said. “I wouldn’t say I’m trying to troll future civilizations.”

At first, he wasn’t sure if he wanted to focus his practice around memes, out of concern that it would be too limiting. But now, Sunday Nobody thinks of the idea of meme art not as a strict limitation for the content of his work, but as a kind of shorthand for his practice.

It also involves an incredibly daunting scale of labor. For the Cheetos sarcophagus, Sunday Nobody spent two days pouring the concrete into his custom-built, rebar-reinforced mold. Three friends had helped out with the lid on Saturday, but he knew it would be too much to ask them to come back for a second day, especially during an intense heatwave.

When the sarcophagus was just the seed of an idea, he described it to his dad, who pointed out how difficult and expensive it would be. The artist was momentarily dissuaded—but then found himself lying awake at night, thinking about the project. 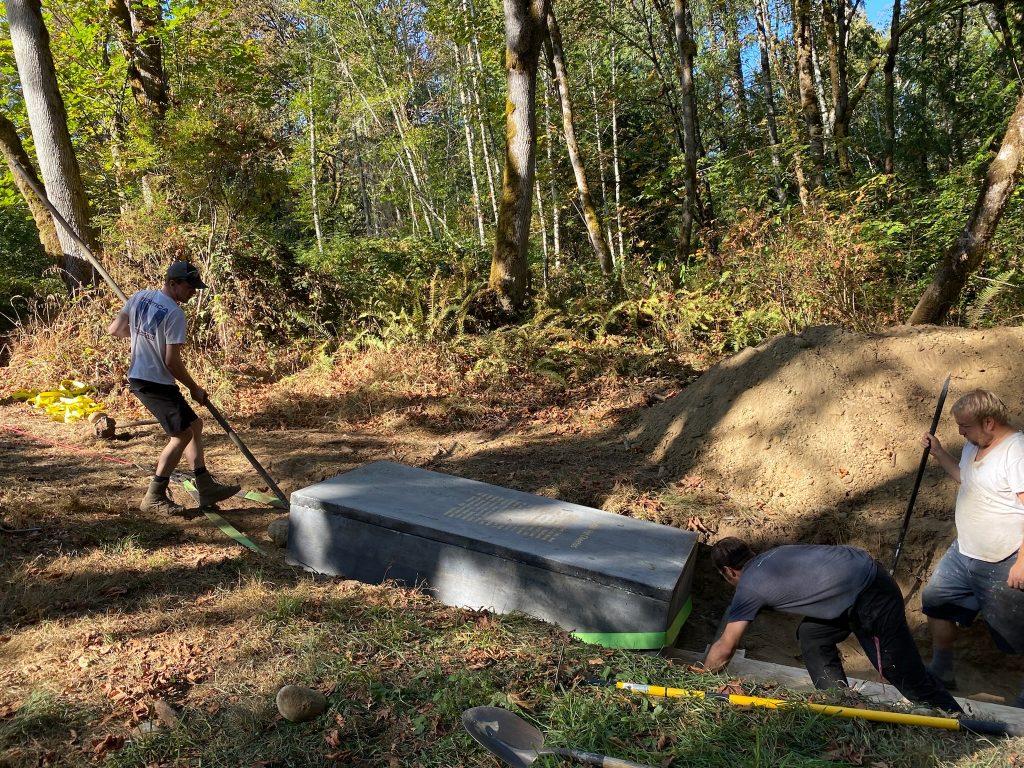 Sunday Nobody’s Cheetos sarcophagus got stuck midway through the burial process. Photo courtesy of the artist.

“The more challenging something is, the more excited I get about it, unfortunately,” Sunday Nobody said. “And it’s always harder and longer than I thought!”

The sarcophagus, for instance, was completed over a four-month span, including a month to let the concrete set. 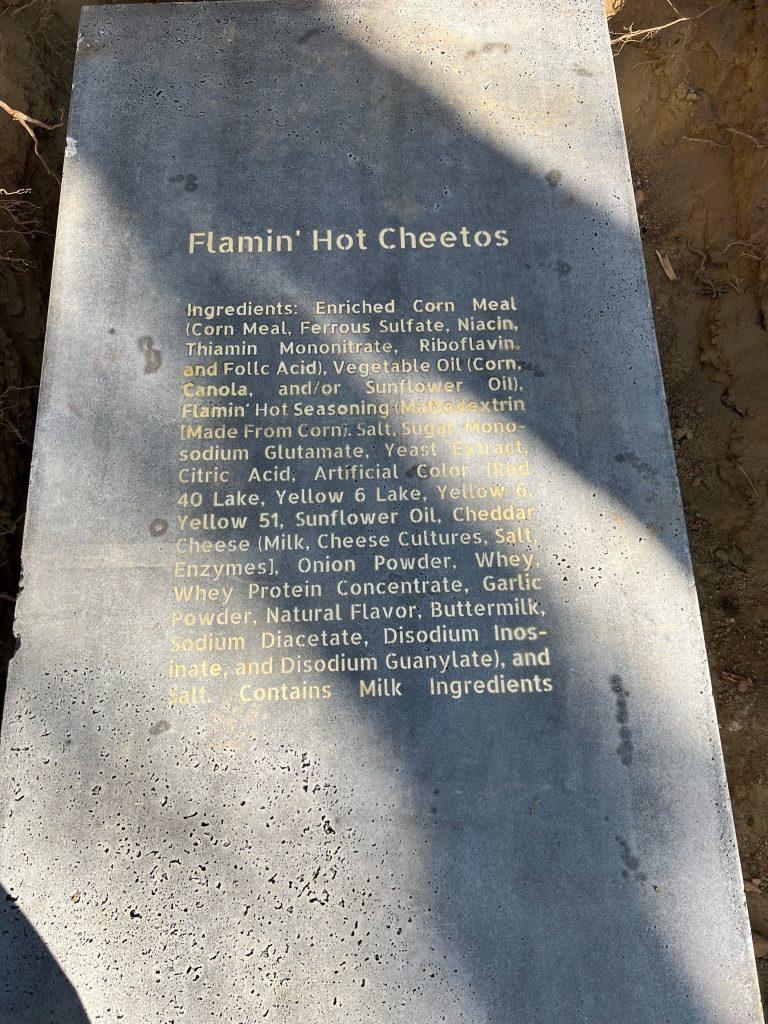 Sunday Nobody’s put the ingredient list for Flamin’ Hot Cheetos on the lid of his 3,000-pound concrete sarcophagus. Photo courtesy of the artist.

And if the internet provides much of the inspiration for Sunday Nobody’s work, it also makes his ambitious projects possible. He credits YouTube videos and online tutorials with teaching him how to fabricate works, like outfitting his CNC machine with a laser he bought online from China to cut out 386 stencils for a street art piece. (The final work, painted in a Seattle tunnel, functions like a giant zoetrope, “animating” an online video of a person dancing in a stuffed bear costume.)

As his online audience has grown, Sunday Nobody has also found that his followers have become a resource in their own right. That’s how he connected with the landowners who let him bury the sarcophagus—and even helped him to dig the hole and get the artwork in place, levering massive pry bars when it got stuck.

“I just hit up people on my Instagram and said, ‘does anyone live in Washington and have property that they own that is willing to let me bury something (not a dead body) on their property?’ These people actually responded and said, ‘yes, come on over,’” Sunday Nobody said. “That is an insane thing to say yes to.”

Of course, not everyone has gotten on board with his meme-centric practice.

“There’s lots of people that are like, ‘this is the stupidest thing I’ve ever seen in my life,’” he admitted. “I can’t argue with that at all.”

Marc Chagall’s Catskills Studio, Where He Painted More Than 100 Works, Just Went Up for Sale for $240,000