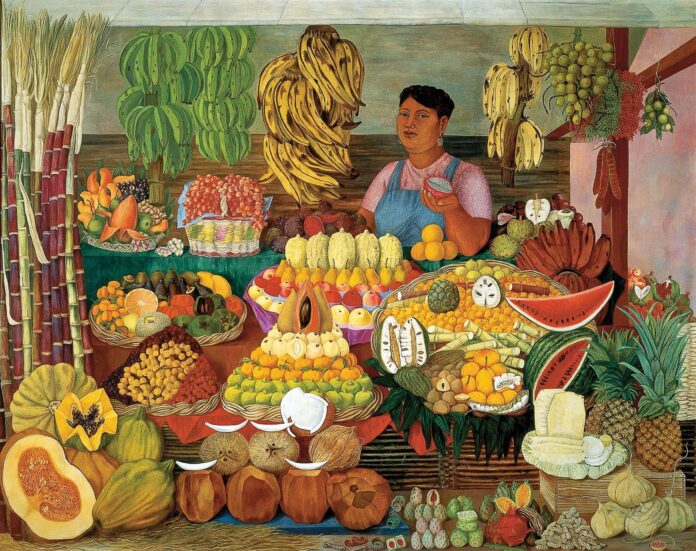 There are 58 different kinds of fruit in La vendedora de frutas (1951), the Mexican Modernist Olga Costa’s (1913-93) best-known painting. The vendor clutches a pink pitahaya that is sliced open to expose its seeded flesh, and her baskets overflow with mamey sapotes, soursops, custard apples—a rainbow of local produce. An illustration of Mexico’s homegrown prosperity and ability to nourish itself, this publicly commissioned painting has been exhibited in Mexico and abroad, and for years even graced the covers of first-grade textbooks.

But in Costa’s native Leipzig, where these fruits do not grow, she is unknown. A new solo exhibition at the Museum der Bildenden Künste Leipzig hopes to sow some seeds of awareness. “Costa’s work is hardly known in Germany,” says the exhibition’s curator Sabine Hoffmann. “We hope to change this with an exhibition in the artist’s native city, the first major institutional exhibition of the artist’s work in Europe.”

Costa’s work is so foreign to her birthplace that all 37 of her works in the exhibition are on loan from international public and private collections, as she is not represented in any German institutional collection. One such loan is that beloved highlight of Mexico City’s Museo de Arte Moderno, La vendedora de frutas, for which Costa’s mother allegedly bought all the fruits so her daughter could paint from life.

Costa’s mother, Ana Fabrikant, and father, Jacob Kostakowsky, were a Jewish Ukrainian couple who left Odessa in 1913 in search of better opportunities in Leipzig. Costa spent her early childhood in the German city before the family migrated to Berlin and later, in 1925, to Mexico.

There, Costa briefly attended the Escuela Nacional de Artes Plásticas but was mostly self-taught. During her short stint in art school, she met the painter and activist José Chávez Morado, whom she married in 1935. A decade later, after working primarily as a stage painter for ballet and theatre productions, Costa had her first solo exhibition and her artistic career started to take off. She regularly participated in group exhibitions, including a number of shows that represented Mexican Modernism abroad.

Even so, at a time when the Mexican art scene was dominated by men such as José Clemente Orozco, David Alfaro Siqueiros and Diego Rivera (who Costa said was “the first man to invite me to drink tequila”), the contributions of women like her to Mexican Modernism have yet to be significantly explored. “As with other women of that period,” writes the Museo de Arte Moderno’s chief curator Brenda J. Caro Cococtle in the catalogue accompanying the German exhibition, “there is a lack of a just assessment of the role they played in the shaping of artistic modernity in Mexico.” Cococtle is referring to Costa’s contemporaries such as María Izquierdo and Frida Kahlo, whose works will also be included in the show for context.

The exhibition and catalogue mine the themes that Costa painted again and again in her flattened style—lush landscapes, portraits of locals, plants elevated to sculptural status and still lifes. “Her commitment to her new homeland of Mexico is not through national pathos but through more subtle references, such as the inclusion of local crafts in her still lifes, portraits of the population, or encyclopaedic depictions of the impressive variety of Mexican produce,” Hoffmann says.

An immigrant who only formally became a Mexican citizen in 1947, Costa found ways to make her adopted national identity her own: for example, by combining the indigenous arts and crafts and natural objects she collected into intriguing still-lifes that tell a new story. Now on view in Leipzig, where Costa’s own story began, they can be seen in another light.