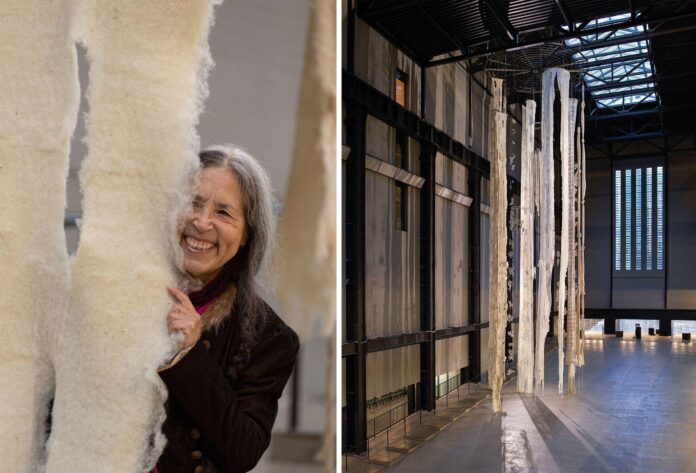 Cecilia Vicuña has had an extraordinary year. The Chilean artist and poet won the Golden Lion at the Venice Biennale, had a major exhibition at the Guggenheim Museum in New York and is the latest artist to take on the UK’s most prominent contemporary art commission, for the Turbine Hall at Tate Modern. There, she presents Brain Forest Quipu, a multidisciplinary piece with two vast hanging sculptures accompanied by sound and video elements. Vicuña sees the components as types of quipu, an ancient Andean recording device using string that she first came across as a young girl in Chile. Quipus were employed for keeping tabs on everything from tax payments to astronomical systems. In the Turbine Hall, Vicuña uses them in comparing rainforests and the human imagination amid the climate emergency.

The Art Newspaper:You’re back in London, where you studied thanks to a British Council grant in the 1970s. And it was here that you heard about Pinochet’s military coup in Chile in 1973.

Cecilia Vicuña: That’s right. I had only three months left of the grant. I was supposed to return to Chile in December, and the coup was in September. So then my life fell apart completely. The whole universe I had known fell apart. And I requested to stay in London. Because it was a Conservative government, it decided that all Chilean students, just a handful at the time, had to leave. There was this wonderful organisation of lawyers, [the National Council for Civil Liberties], that defended people like myself for free. There was a trial of the Home Office against Cecilia, and the [council] had to prove that if I went back to Chile, I could be killed. And they used the book of poetry that I had just published, Saborami, perhaps the first book to come out after the coup that spoke of the crime. I will never forget the image of the judges; it was the line of men with black gowns and their funny white wigs. They’d lift my book with great ceremony. And at the end of that they conferred among themselves and then they said: “asylum granted”.

In the Turbine Hall, you’re dealing with a different tyranny: climate change. You have these huge white “tactile quipus” that hang from the ceiling. What’s their significance?

The title Brain Forest Quipu comes from the fact that in the West we have a reductivist view of the brain, as if it were a sort of physical object that exists in us. The ancient people created several quipus, and the tactile quipu was one of them. Then they had a virtual quipu, where they imagine themselves connected to all communities in their known universe. These communities connected to the sources of water in the mountains and, in turn, this water connected to the origin of water in intergalactic space. That’s the kind of quipu that interested me as an imaginary thinker, or thinker of images, when I was a young girl.

So why did I learn that? How did I learn that? From nowhere: it’s in the air, it’s available to all people who imagine. That tells you that there’s another kind of brain, where all imaginations are wedded. And I believe this is the perfect equivalent of the living network, the web of life that allows this planet to be: the rainforest. So the invitation from the Tate, for me, is an opportunity to speak of all those dimensions of the quipu, because the Turbine Hall demands a different scale—of the imagination, not just for the sculpture. It is [a space] for us to imagine a different kind of being in the world, a different kind of society, different kinds of connectivity.

You’re working with a community of Latin American people. Why did you want to work with them?

I’ve always loved the River Thames. I started to speak with the curators here, telling them that one of the things that I loved about the Tate was the chance to be close to the river, to involve the river somehow in the installation. And I said that at low tide I go down and I touch the river. And they said, “Oh, you know about mudlarking?” I learned that there was a huge number of people involved in this ancient activity and there was this particular community of Latin American women who would be happy to participate in this. I needed a group of people that could be happy to be gathering for me, because I couldn’t be here for a long stretch. So this quipu was constructed by many hands—more than 20, I would say.

You have a towering structure made of small things. That breadth of scale is tremendously important in everything that you do.

Yes, this is true; it is an artisanal process. Practically all the animal elements and all the plant elements, in terms of fibres, in terms of threads, in terms of the materials, are endangered now by this climate catastrophe that is already unfolding. So every little twig is precious. It’s imbued with this love and appreciation, and this need to be aware that everything is in danger and therefore we are in danger. Our lack of awareness is becoming criminal towards ourselves. So, how do you deal with self-destructiveness if not through awareness and compassion, at the same time, for your own violence? That is the point that I think the quipu makes; these materials that are so willing to be touched, and we want to touch them because they’re soft, they’re hurt. That is innate in us: to want to caress, to touch, to hold.

• The Hyundai Commission: Cecilia Vicuña: Brain Forest Quipu, Tate Modern, London, until 16 April 2023. Works by Cecilia Vicuña are at Lehmann Maupin, Frieze London. This is an excerpt from a conversation on The Week in Art podcast, which you can hear on the usual podcast platforms from 14 October.