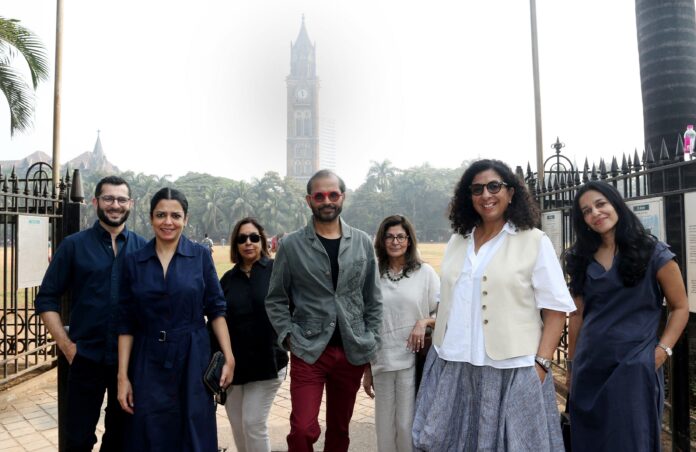 In what is being touted as a sure sign of India’s flourishing art market, Mumbai Gallery Weekend (MGW) is currently holding its largest edition yet (until 15 January), with 32 participating dealers—its first regular event since 2020. Since then, the financial capital’s gallery landscape has seen significant shifts as India’s leading dealers have rolled out expansion and relocation plans in the city.

The first such instance was in March 2022, when Mumbai’s oldest contemporary art gallery Chemould Prescott Road launched an extension programme supporting young and emerging artists. Chemould CoLab, named in part for its location in the southern gallery hub neighbourhood of Colaba, is co-directed by Sunaina Rajan and Atyaan Jungalwala, the daughter of Chemould Prescott Road’s owner Shireen Gandhy.

This announcement was soon followed by a new venture from Chatterjee & Lal, another Colaba-based gallery whose artists include the late Modernist Nasreen Mohamedi and the 2019 Jarman Award-winner Hetain Petal. In April, its founders, Mortimer Chaterjee and Tara Lal, launched the design-focused gallery C&L Design, in collaboration with the lifestyle store Baro Market.

Also joining the fray was Experimenter from Kolkata, a regular exhibitor at Art Basel and Frieze fairs, which last September took over a 3,000 sq. ft space in Colaba—one that is well known to the Mumbai gallery-goers as it is the former premises of Galerie Mirchandani + Steinruecke. The latter gallery recently moved, after 16 years, to a larger, 5,000 sq. ft space in the Ballard Estate area, where recently expired leases and high ceilings are drawing in dealers.

Finally, this March, TARQ gallery, which counts the photographer Ronny Sen on its roster, will also expand, moving from opposite the Chhatrapati Shivaji Maharaj Vastu Sangrahalaya (CSMVS) museum to a larger space in the Ballard Estate next year. “When I began in 2014 I was focused on developing an exceptional and exciting programme. It seems that in the last decade several of Mumbai’s galleries have taken the time to do the same in a considered and careful way, and are are now ready to expand,” says Hena Kapadia, the gallery’s founder.

This recent groundswell in the Mumbai gallery ecosystem meets reports of a robust Indian art market, which recorded its best year ever in 2022 according to Indian Art Investor. But do expansions by the region’s top galleries mask a stagnation in other sectors, specifically emerging ones?

While Mumbai’s established galleries—most of which opened within five years of India’s art market boom and bust in the mid 2000s—are strongly represented at gallery weekend. Younger spaces—those less than eight years old—are considerably less-so. This seems to be more a case of non-existence than exclusion: when asked by The Art Newspaper, most attendees at an MGW event yesterday struggled to name one curatorially ambitious gallery not attached to an existing one (as is the case of Chemould CoLab) that has opened in Mumbai since 2014. But it is also about a lack of quality works among the emerging galleries that do exist.

“New independent galleries of a high standard have maybe not emerged in the last few years, but the continued expansion and imminent professionalisation of MGW speaks to a new infrastructure that is being built in the city—one that will support new faces. More fantastic galleries are in the offing,” says Ranjana Steinruecke, the director of Mirchandani + Steinruecke and a committee member of MGW.

According to Chatterjee, the last time a spate of exciting spaces opened in the city was during the mid 2000s due to “a spike in interest in contemporary art coupled with the launch of a new gallery with international ambitions, Bodhi Art [now closed], which forced existing players to up their game”.

But now, facing another art market boom, growth seems more measured. One of the reasons can be attributed to a lack of space in the peninsula city—a longstanding issue which contributes to its property prices being the most expensive in South Asia. “Investing in a gallery is a risky commitment, especially when rent is so high,” Steinruecke says. In response to this, some younger commercial art spaces also rely on separate revenue streams, such as Method, which opened in 2021 and has a café in its Bandra location. The gallery, which markets itself as an “anti-gallery” and industry disruptor, is staging a solo show of Neo-futurist sculptures by the Spanish artist Demsky.

Indeed, visible across MGW are a number of commercial ventures—albeit not traditional galleries showing fine art—that are making space for emerging talent. St+art Indian Foundation is currently holding the Mumbai Urban Art Festival at Sassoon Docks (until 22 February), featuring a selling exhibition of NFTs. A short drive away, IFBE, a large new venue for visual and performance art in Ballard Estate, is hosting a show of 14 emerging artists in collaboration with Young Collectors Weekend, an independent venture to develop a new generation of art buyers in India.

“We are not strictly an art gallery but a more flexible, expansive space that has responded to the city’s need for fresh ways to show art,” says IFBE’s director of programmes Sarita Vijayan. She notes that a lot of recent change in the top end of the market is in fact being matched by new independent galleries that “have sensed the market upswing” and are accommodating a new, younger class of collectors eager to learn more about art. “Yes, the work these galleries show is perhaps not very serious or sophisticated, but then again, the number of serious collectors in India is still not that high,” Vijayan adds. “But this is changing—the next five years in India will be an extremely defining period.”