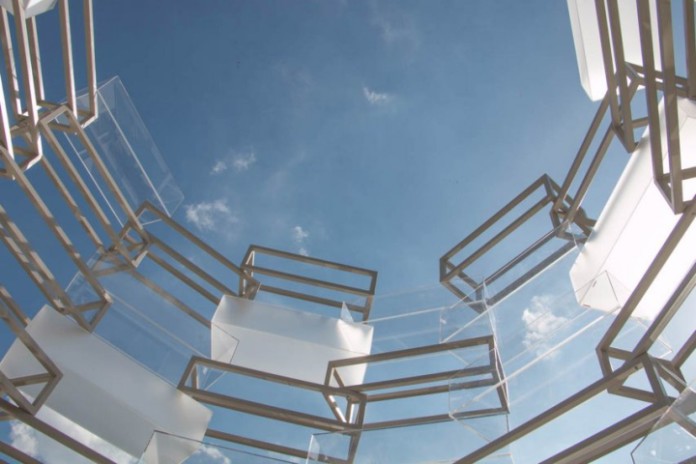 Empty cuboids representing both museum vitrines and coffins are stacked to create this installation outside Mexico City’s Museo Tamayo. Designed by German architects Nikolaus Hirsch and Michel Müller, the Museum of Immortality was erected as Design Week Mexico’s annual pavilion – Mexico City’s equivalent to the Serpentine Pavilion in London and the MPavilion in Melbourne. The structure is located in Chapultepec Park, beside the brutalist art museum completed in 1981 by architects Teodoro González de León and Abraham Zabludovsky. Visitors are able to walk around and inside the eight-metre-high rotunda, which narrows gradually towards its open top. Steel frames form the main structural system, with transparent and translucent perspex boxes slotted in between the gaps. The architects liken the shape the blocks create to a mausoleum and a space capsule. The modules are designed to evoke both sarcophagi – a nod to Mexico’s death cults – and vitrines used to display objects in museums. “We thought very much about what a museum is, and what design in relation to a museum, is today,” said Hirsch. “We thought it would be interesting to relate the preservation of objects – the raison d’être of a museum – to the preservation of humans.” At night, lights around the perimeter and inside the translucent elements illuminate the installation. Just behind, inside the museum, a 30-minute video explains the theoretical premise of the project – based on the work of German-Russian philosopher Boris Groys. It was originally presented in a horizontal configuration in Beirut in 2014, while another iteration is set to be installed at this year’s Istanbul Design Biennial. The installation was completed for the eighth edition of Design Week Mexico, which runs from 5 to 9 October 2016, and will remain in place until spring 2017.

Photography is by Alberto Jurtega