Home News Mysterious Georgia Rock Art Formation—Considered by Some the ‘American Stonehenge’ and by... 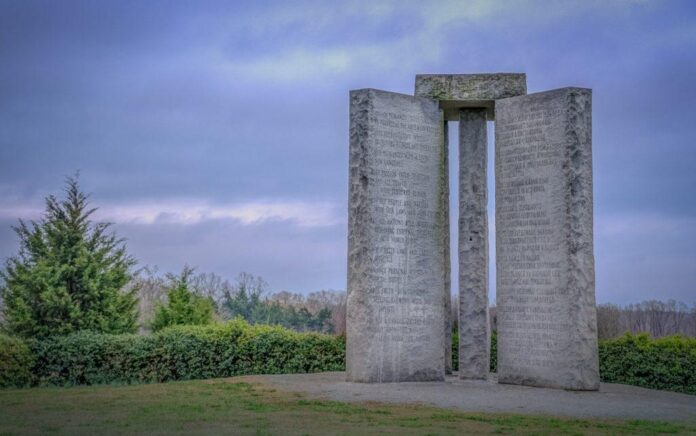 The , a mysterious public artwork sometimes called the “American Stonehenge,” are no more. In the early hours on Wednesday, unknown individuals detonated a bomb that severely damaged the sculpture that stood in Elberton, Georgia for more than 40 years.

In the wake of the attack, and citing safety concerns, the government demolished what remained of the work, which had inspired many conspiracy theories. Kandiss Taylor, a Republican candidate for governor in Georgia, had recently promised to destroy them due to fears they were the work of a satanic New World Order.

“The preliminary information indicates that unknown individuals detonated an explosive device at around 4:00 a.m. on Wednesday, July 6th,” the Georgia Bureau of Investigation said in a statement. “Elbert County Sheriff’s Office personnel responded to discover the explosion destroyed a large portion of the structure.”

Surveillance video captured the explosion, followed by a car fleeing the scene shortly after the explosion. One of the stone slabs was reduced to rubble by the blast, but no one was injured in the incident.

“I’m sad not just for Elberton and Elbert County, I’m sad for the United States and the world. These were a tourist attraction, and it was not uncommon for people around the world to be up here at any given time,” Chris Kubas, executive vice president of the Elberton Granite Association, told the local FOX affiliate.

“To quarry something of that size and get those four of them that precise… with the sandblasting it took to letter those languages, that is utter craftsmanship that you wouldn’t find anywhere else,” he added.

The Georgia Tourism Board, which previously promoted the “most unusual set of granite monoliths,” has already removed all mention of  from its website. 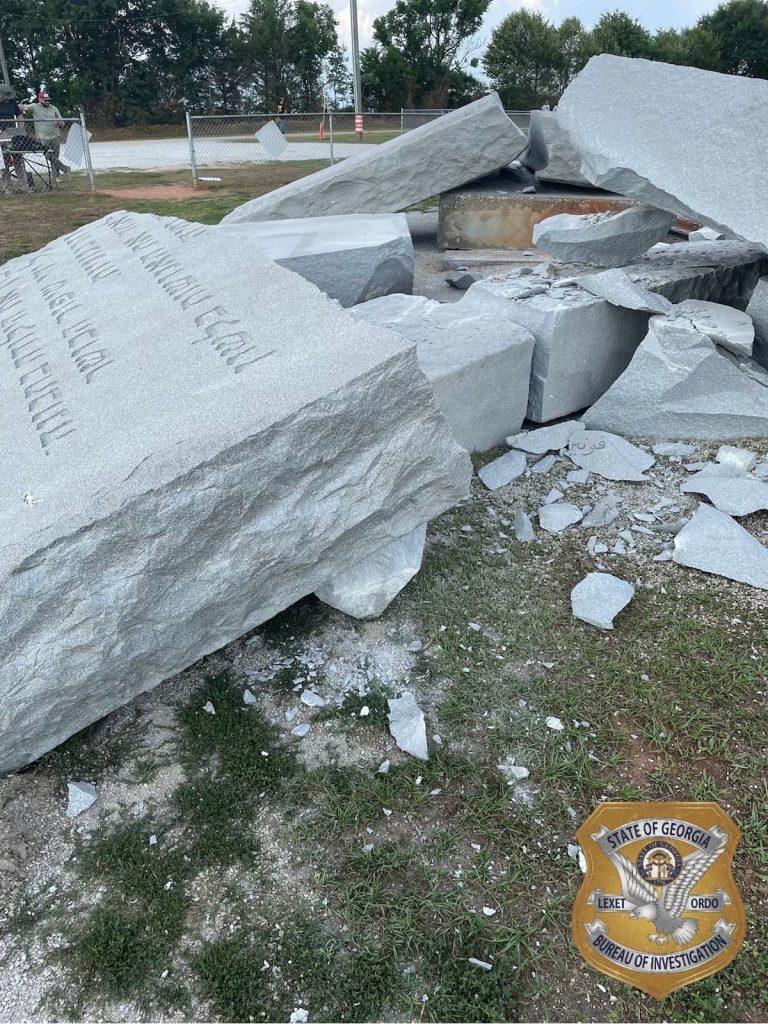 The following the bombing. Photo courtesy of the Georgia Bureau of Investigation.

“It’s unfortunate that we live in a society that thinks that tearing down things that you disagree with is acceptable. I’m at a loss for words right now,” Matt Clamp, who helped his father, Charlie Clamp engrave the stones, told the .

He called the conspiracy theories surrounding the artwork “whackadoodle” and pledged to help rebuild the work.

The 19-foot-high, 237,746-pound monument was erected in 1980, at the behest of a man calling himself R.C. Christian. He is said to have been representing a “small group of loyal Americans who believe in God” and wanted to “leave a message for future generations.“

Only Wyatt C. Martin, a retired local banker who helped arrange for the work’s installation, is said to have learned Christian’s true identity, and he has sworn to never reveal it. 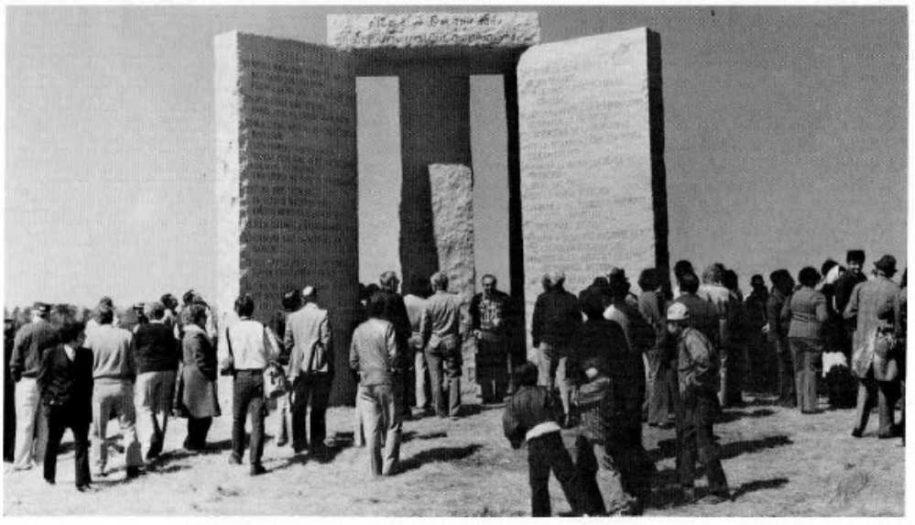 The at its unveiling in 1980. Photo courtesy of the Elbert County Chamber of Commerce.

Located a two-hour drive northeast from Atlanta along Highway 77, the piece functions as an astronomical calendar. Each day at noon, the sun shines through a small hole to illuminate the date engraved below.

But the most mysterious part of the work is the 4,000-character inscription, written in the ancient languages of Sanscrit, Babylonian cuneiform, Egyptian hieroglyphics, Greek, as well as English, Russian, Hebrew, Arabic, Hindi, Chinese, Spanish and Swahili. 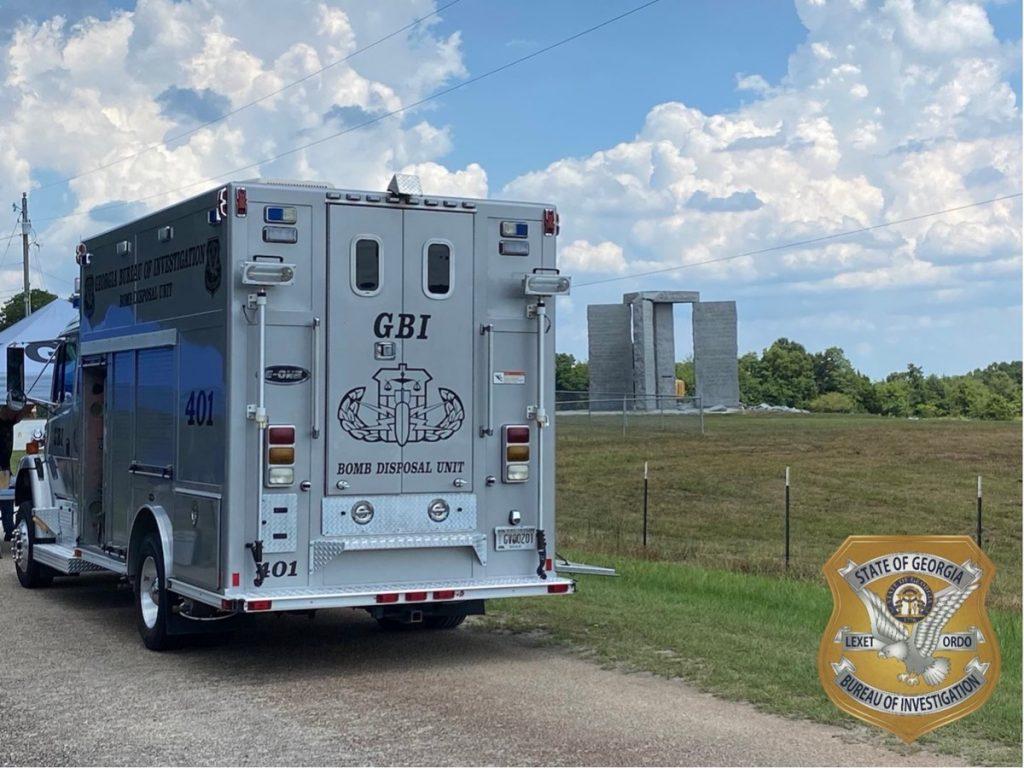 The bomb disposal unit at the following the bombing. Photo courtesy of the Georgia Bureau of Investigation.

The message is written in 10 lines, like a modern-day 10 Commandments, offering instructions for the conservation of mankind and future generations—instructions that some believe come from a dangerous cult.

Some conspiracy theorists contend that the order to “maintain humanity under 500,000,000 in perpetual balance with nature” is proof of a plan masterminded by global elites to cull the world’s population.

“I am the ONLY candidate bold enough to stand up to the Luciferian Cabal,” Taylor wrote on Twitter. “Elect me Governor of Georgia, and I will bring the Satanic Regime to its knees—and DEMOLISH the Georgia Guidestones.”

Her accompanying campaign video, amusingly, decries the movement to tear down monuments of Confederate leaders and slaveholders. Declaring this “a war between good and evil,” Taylor promised that her 10th executive order would ensure the sculpture’s removal.

I am the ONLY candidate bold enough to stand up to the Luciferian Cabal.

Elect me Governor of Georgia, and I will bring the Satanic Regime to its knees— and DEMOLISH the Georgia Guidestones.

Join me in my fight to #TearThemDown!

It remains unclear if the vandals who planted the bomb were part of Taylor’s #TearThemDown campaign, mocked roundly on a recent episode of .

In the May primary, Taylor garnered just 3.4 percent of the vote, coming in third place behind David Perdue. Incumbent Brian Kemp secured the party’s nomination, and will face a rematch with Democrat Stacey Abrams in the general election. Presumably, the  will not be a major campaign issue.

“God is God all by Himself,” Taylor write on Twitter following the monument’s demolition. “He can do ANYTHING He wants to do. That includes striking down Satanic Guidestones.”

Read the full message from the stones below:

Maintain humanity under 500,000,000 in perpetual balance with nature.

Protect people and nations with fair laws and just courts.

Prize truth—beauty—love—seeking harmony with the infinite.