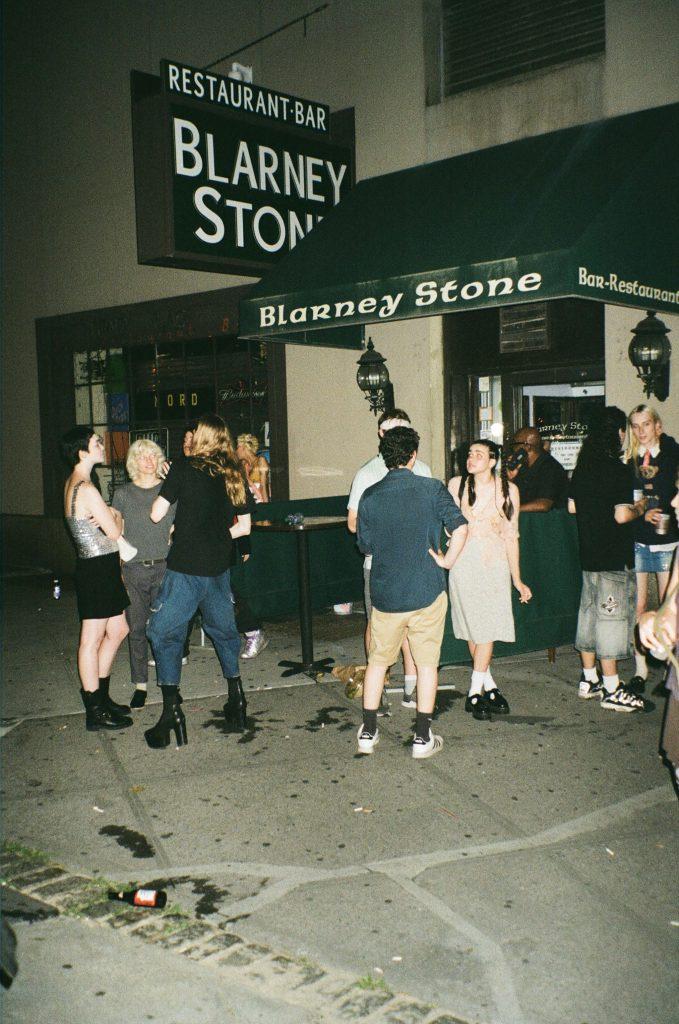 GET IN LOSER, WE’RE GOING TO FIDI

I started noticing it around when Balenciaga’s creative director Demna Gvasalia decided that the brand’s off-schedule show for Spring 2023 would take place in the middle of the New York Stock Exchange. The art world showed up for it, including MoMA curator Stuart Comer, artist Josh Kline, and Venice Biennale curator Cecilia Alemani. Since then, I’ve found myself on the downtown A/C train to the city’s most decrepit subway station— Chambers Street—more often than I would expect.

“Its sort of the last frontier of Lower Manhattan,” Casey Gleghorn, the owner of No Gallery, told me on a recent afternoon. “It’s like downtown Los Angeles vibes, but cleaner and less rough.”

Now that Google Maps has officially identified Dimes Square as a micro-neighborhood, I can say with authority that the Financial District is just under a mile and a half away: a pleasant 20 minute stroll down East Broadway. You can grab a drink at Dr. Clark or The River along the way.

Gleghorn, whose gallery is in the popular cluster of spaces on Henry Street, threw a party in FiDi last week with his stylist girlfriend Sophia Boli at Skino’s, a Greek restaurant-cum-nightclub. The crowd, which blended the art and fashion scenes, drank Coronas and danced to Blaketheman1000.

A week before that, I was at Skino’s for the wrap party of www.RachelOrmont.com, a new film by Peter Vack starring Chloe Cherry, Dasha Nekrasova, and Betsey Brown. (Since this is an art publication, I won’t bore you by explaining who all these people are; they’re basically just the cool kids of the downtown film scene).

“I thought the venue was a nice change,” said Lomex Gallery‘s Alex Shulan, who also recently threw a party there.

While reporting this story, I kept coming back to the macro question. “Why here? What’s appealing?” Maybe there was some hipster irony to hanging out in an area that I most closely associate with finance bros, capitalist greed, and soulless fast-casual dining. But unilaterally, it seems to be a function of the looming recession more than an aesthetic choice. 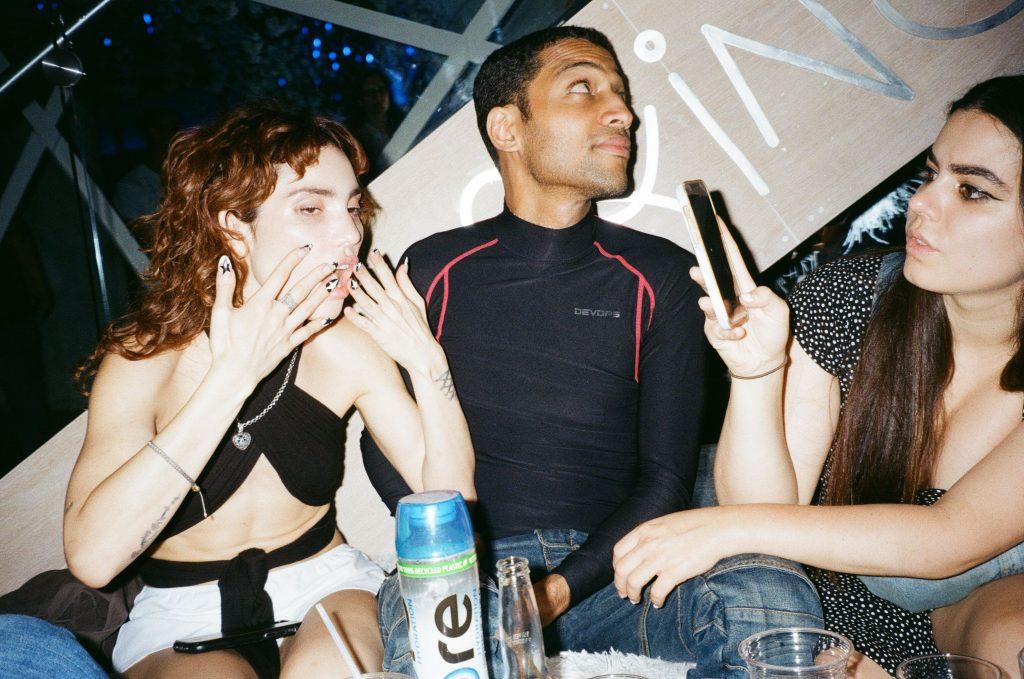 The scene at LOMEX’s party at Skino’s this summer. Photo courtesy of Matthew Weinberger.

The vibe inside Skino’s is pretty nondescript: it’s got two floors with one bar each and a bare-bones dance floor on top. A friend remarked that it resembles someplace we would have gone to for a bar mitzvah in suburban Atlanta. “There’s just no venues in Lower Manhattan, and there’s open venues over there,” Boli told me. Afterparties can get expensive as they require a 4 a.m. liquor license. “Everyone’s just looking for a venue to throw a free party,” she said.

Skino’s isn’t the only hotspot in the area. About two weeks ago, a flyer came into my DMs claiming that “T.J. Byrnes is the new Forlini’s.” This intriguing claim came from cultural critic duo Josh Citarella and Mike Pepi, who hosted a book club at Forlini’s for years before the beloved Little Italy spot closed its doors earlier this year. Since then, they’ve moved the meet-ups to T.J. Byrnes, which has a suspiciously similar interior to Forlini’s, complete with cherry-red booths and an old wooden bar.

One recent book-club meeting, which centered around my colleague Ben Davis’ (excellent!) , snowballed into “a much larger party of downtown arts and culture people,” Citarella told me. The likes of Dean Kissick, Rachel Rossin, and Lola Kramer wound up hanging out into the wee hours of the morning. “The downtown scene needs a headquarters,” Citarella added.

Rossin, who recommended the spot to Citarella, has her studio across the street, in a building that Cy Twombly and Robert Rauschenberg once shared. In October, she plans to open a nearby project space called the Dunkunsthalle in an abandoned Dunkin Donuts alongside Signal Gallery’s Kyle Jacques and artist Moira Spahic. The vision is “Kunsthalle logic, but FiDi Dunkin’ Donuts remix,” she said. “I’m not interested in running a commercial gallery, I don’t want to sell shit.”

Meanwhile, the established party Club Glam, which used to crop up semi-monthly at the now-shuttered China Chalet, has returned to FiDi at another location, the Irish gastropub, Blarney Stone. In its first iteration, the party was hosted by artists Ally Bo and Jeffrey Joyal alongside a handful of models, and everyone from Bridget Donahue to Jeanette Hayes showed up. “The crowd has always been a mix of a lot of scenes,” the artist Borna Sammak told me. “It’s like gays, fashion people, art people, a lot of skaters, etc.” 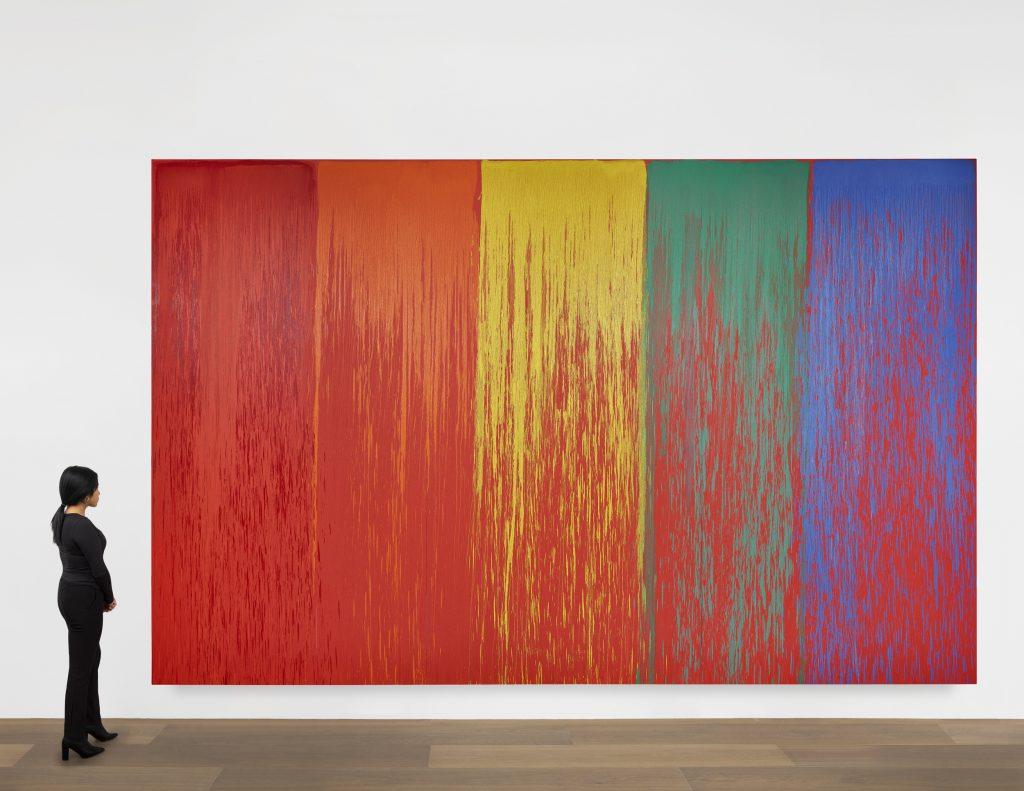 Galleries may be closing their doors for their annual August hiatus, but behind the scenes, the grind never stops—including the process of wooing artists. Sources tell Wet Paint that Pat Steir, the 82-year-old painter whose sumptuous, meditative abstract paintings have developed a growing following, is preparing to leave LGDR (she had shown with Lévy Gorvy since 2016) to join blue-chipper Hauser & Wirth.

The artist and her galleries declined to confirm the plans, but sources say the shift is in progress. And it makes sense that some artists might be successfully recruited to new homes during the LGDR transition. Over the past several years, Steir has had major solo exhibitions at the Hirshhorn Museum in D.C., the Long Museum in Shanghai, the Barnes Museum in Philadelphia, as well as an outing at Gagosian Rome.

For the past five decades, the artist has developed a signature style of painting, which sees her thin down paint almost to the consistency of ink, add layer upon layer of color, and conclude with bold strokes that drip across the surface, creating a waterfall effect. The approach is informed by her study of Zen Buddhism and Taoism, and has often linked her process with the minimal symphonies of John Cage.

“I think everybody understands that Pat has had a long career, she’s developed a unique artistic language, she is a very serious, thoughtful artist, and that she’s the real deal,” advisor Todd Levin said. Nevertheless, he described her market as a “mixed bag,” adding, “When one speaks to informed curators or critics, no one has anything negative to say about Pat’s practice. But the transactional art market is a different matter.”

Indeed, Steir’s auction prices lag behind those of her male contemporaries as well as market stars decades younger. As my colleague Katya Kazakina reported earlier this summer, female artists of Steir’s generation—among them Mary Heilmann, Howardena Pindell, and Faith Ringgold—account for just 5.3 percent of the $16.7 billion in auction sales over the past five years. Kazakina pointed out that Steir’s gross auction revenue of $18.3 million lags behind the $18.8 million generated by Loie Hollowell, who is about 40 years her junior.

Steir’s current auction record was set in 2018, when (1992) sold for $2.3 million at Phillips New York. In 2021, her work garnered $2.8 million at auction. So far this year, only five paintings have hit the block—one sold below estimate, two sold within estimate, one exceeded its estimate, and the priciest, a waterfall painting with a $700,000 low estimate, failed to sell.

According to Levin, a standard, medium-sized Steir painting typically sells on the primary market for around $400,000 to $600,000, and another advisor told me that he’s seen a larger work fetch around $750,000 back in 2020. The same advisor noted that Gagosian may have bumped the prices up further for her recent outing in Rome.

LGDR is hiring for a new digital archivist … Eric Adams is apparently not only a regular at Zero Bond, but also a shadily-run restaurant called Osteria La Baia … An anonymous Chinatown gallery seems to be getting rid of a heavy-duty art crate for international shipping via Craigslist … Jordan Huelskamp‘s new decentralized art fund, Salon, has officially launched on the Blockchain … Artist Will Shott is opening a New York jewelry store-cum-gallery is next month on Pike Street, called www., adding to Henry Street‘s rapid growth as a hub …

The Clinton family has been making the art rounds this week, with Bill stopping in at Harper’s East Hampton this past weekend, and Hillary hanging out at Lisa Perry’s new artist residency *** Jordan Wolfson seemingly tricking people into believing that Bob Dylan has passed away via his Instagram (he has not) *** Björk hanging out with Hilton Als and gallerist Clarissa Dalrymple in a latergram posted by Als *** Art-world publicist Kaitlin Phillips got the profile treatment ***

Last week, I took us all on a trip down memory lane to the Trump presidency and asked what artist you would have tasked with supplying his presidential portrait. Advisor Sue Stoffel wrote in either R. Crumb or Peter Saul, Glenn Dranoff of Dranoff Fine Art added surrealist painter Mark Kostabi, and advisor Liz Beamn Delman suggested Jenny Saville, saying, “Obviously he would be nude. ‘It’s going to be huge. Huge. So huge you’ve never seen anything like it. And oh is it gorgeous. So gorgeous. The most gorgeous portrait ever painted.’” So true!

My next question: Who in the art world has the cutest dog? Email your response to [email protected]

The most enticing art exhibits across the US in 2021