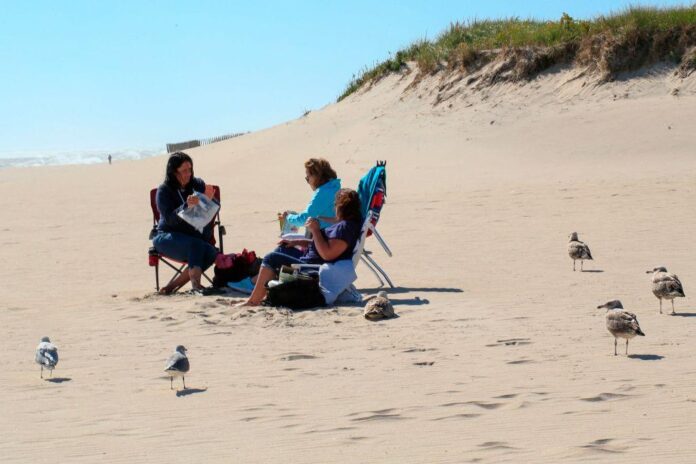 THE HIGHS AND LOWS OF THE HAMPTONS

During my tenure here at Wet Paint—and it’s been exactly a year to date, dear readers—I’ve found it to be of the utmost importance to keep a good balance between the highbrow and the lowbrow. Nowhere else are those two poles in closer tension than in the Hamptons. Having spent the past weekend out there, I couldn’t feel more confident in that assertion. The flagrant displays of wealth out East yield both extremes of garishness and tastefulness.

Let’s start with the fun stuff.

The annual Watermill Benefit has always been a kooky affair. It’s the only gala I’ve been to where I have to sign a waiver to enter, and after you do, it’s a sort of Kafka-esque dream/nightmare of some of the most outlandish performances you’ve seen. It’s also typically littered with real A-listers: Isabella Rossellini, Sarah Jessica Parker, Robert Downey, Jr.

This year was a bit… different.

Though the performance art was as gripping as in years past, probably the most interesting spectacle was the removal of curator/socialite/alleged biter Stacy Engman from the premises by security.

Unfortunately, I did not see this myself, which is surprising because she came to the event decked out in one of the evening’s flashier outfits: her signature tiara, a pink-feathered dress, bedazzled glasses, and a bespoke sash that read “Art Royalty.” (I hope by now you’re guessing where this story falls on the garish-tasteful metric.)

“Art Royalty” has some relevance here beyond a strange self-given honorific; its also Engman’s name on OpenSea. Which is relevant, because apparently, upon her removal from the party (which she denied when contacted by PageSix), she was attacked by someone outside who was so envious of her crypto-wallet that it drove her to violence..

“Someone said she was targeting me since I’m a billionaire and since my NFTs are worth so much,” she told . “I really hope I never see her again.”

A Watermill Center rep said they couldn’t comment on the incident because they were unaware of it happening. Engman did not reply to multiple requests for comment.

But there is at least  reason to doubt the attacker’s alleged motive, because a quick look at the Art Royalty crypto-wallet reveals that none of her NFTs have seen a single sale—ever.

For instance, one piece from her wallet, ART ROYALTY MASTERS – STACY ENGMAN + VAN GOGH, was at one point listed for sale at $8 million. It never sold. Funnily enough, Engman also has a collection of unsold NFTs called AvaSTARs—not to be confused with another, slightly more legit collection called Avastars.

No legal filings that I can find have cropped up since the alleged attack, and her attacker has not been identified. An assistant to Engman wrote to Wet Paint that it was not an attendee who attacked her, but someone waiting outside.

They added: “The preference is to keep the focus on the celebratory occasion of Stacy’s great accomplishment with her Masterworks and Magnificent Gems NFT Spotlight that she debuted on the BMW NFT Art Car at Hamptons Polo and her exciting showcase at NFTnyc of her AvaSTARS and wearables.” So, congratulations on those accomplishments! 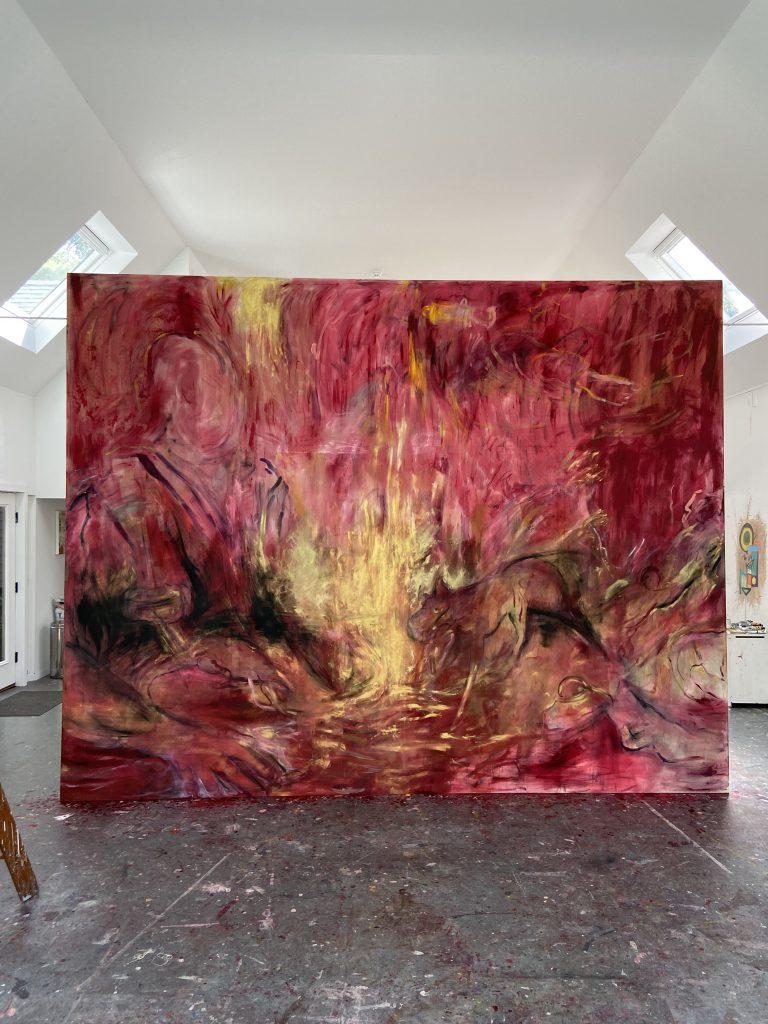 One of Laurie Anderson’s paintings in progress at the Elaine De Kooning House in East Hampton.

Anyways, on to the high brow.

Among all the excellent shows out East (Maki Na Kamura’s dynamic canvases at Michael Werner Gallery; a terrific group show of textile works by artists such as Mike Kelley and Faith Ringgold; a handful of local artists showing at Eric Fischl and April Gornik’s space, the Church) is the worldwide debut of Laurie Anderson‘s paintings.

If the Hamptons art scene were a safari, catching a peek at one of these works might be the equivalent of spotting a white Bengal tiger. The artist is mostly known for her sound and virtual-reality art, which earned her an expansive and critically lauded retrospective at the Hirshhorn Museum this year titled “The Weather.”

But nary a single painting by the “O Superman” artist was in that exhibition, and the closest anyone has come to seeing one of these works (unless you’re a Schnabel) is in the ‘s cover story from last week, wherein she smiled in front of a large canvas.

I like to share my wealth of access with my loyal Wet Paint readers, and my visit to the always-gorgeous Elaine De Kooning House in East Hampton allowed me a brief afternoon to steal a glance into the studio in which Anderson has been working as part of their residency program for the past several weeks. 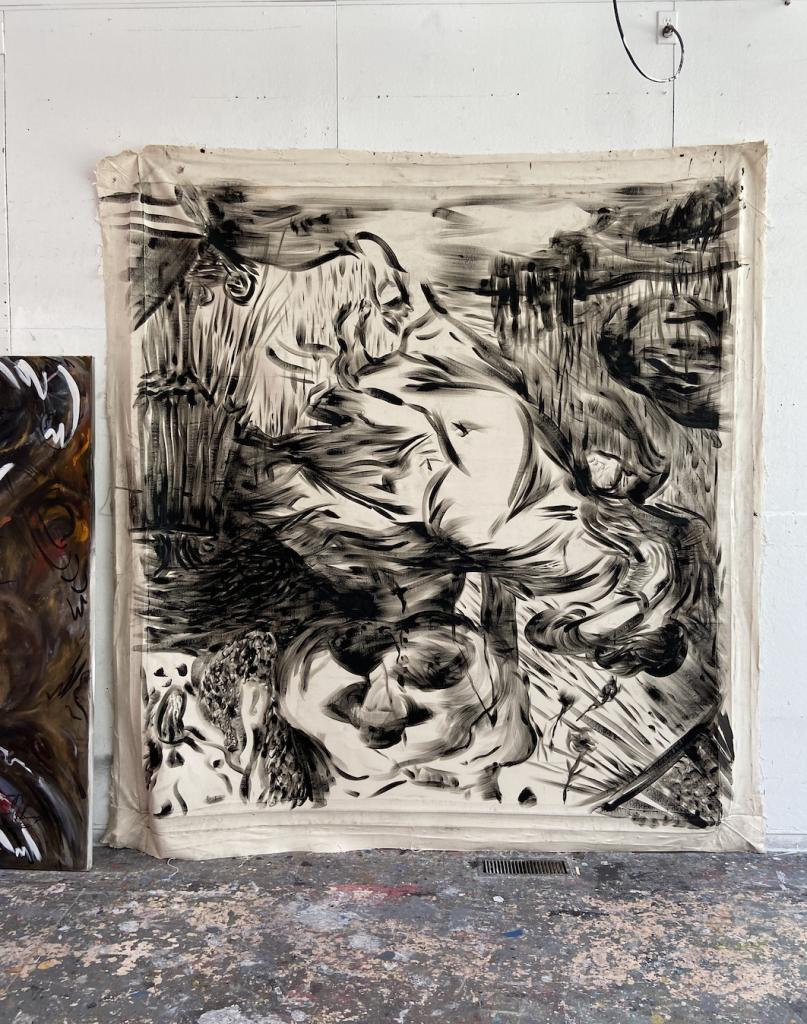 “The last time she painted on a canvas this big was probably around 2012,” art dealer Chris Byrne, the founder of the Dallas Art Fair who takes care of the house, told me. “Lou [Reed]’s health was failing, and they went out to Julian Schnabel’s house.”

During this period of intense emotional duress, Schnabel stretched a canvas for her to paint on. Byrne told me she hasn’t painted since then. So here’s your rare chance to see some of her most elusive works.

NICOLAS PARTY KNOCKS OFF HIS OWN WORK

Unless you’ve been living under a rock for the past several years, you know that art-market superstar Nicolas Party has been in hot demand ever since Hauser & Wirth made him one of the youngest names on it roster. Seemingly, the artist is unfazed by the demand for original works, to the point where he’s basically making his own knock-offs.

Hanging at high-end clothing atelier Dover Street Market in Los Angeles right now is a recreation of Party’s (2018). One might stop and think this is an unauthorized print-out or a fake, but in fact, it’s a skewed print out issued by the artist’s own studio.

According to a spokesperson from Kaufmann Repetto, “Dover Street Market LA did reproduce Portrait (2018), in discussion with/at the approval of Nicolas Party’s studio.”

The reproduction crops the original piece, which was brought to Art Basel in Switzerland in 2018 with Kaufmann Repetto. Why would Party allow this, you might wonder? Well, the reproduction is only for decorative purposes in the jewelry section of the store. Party chose the piece and allowed for its recreation as a favor to a friend who is a vice president at Dover Street Market. Unfortunately, the piece is not for sale. But it’s obviously good to have friends in high places.

… Lucien Smith ran up a $228.56 bar tab (including over $100 on matcha martinis) at downtown sushi spot Time, got called out on Instagram, then paid it over the phone and left a 25% tip … Artsy sent an email to gallerists detailing a new ban on off-platform communications between collectors and gallerists that has left more than a few dealers unhappy—”people are super pissed,” one tipster told Wet Paint … A new documentary called  about the father of claymation, Will Vinton, will be released this weekend … Speaking of the Hamptons, Sheri Pasquarella has been named executive director of the Church Sag Harbor … Finneas, musician and bestie of Alex Israel, has a new song titled “Mona Lisa, Mona Lisa,” which contains the truly vexing lyric: “she could be Mona Lisa, if Mona Lisa had a prettier face” 🤔  … Hari Nef has been tapped to play Candy Darling, one of Andy Warhol‘s muses, in an upcoming biopic …

It seems like artists cooking dinner for their own openings has been a trend lately, so last week, I asked you to name your favorite artist-chefs.

Pali Kashi, owner of the gallery Europa, suggested Alex Eagleton, and Marinaro owner Lauren Marinaro wrote in: “Tracy Thomason is an incredible chef! Her salads are incredibly creative and complex and she constantly tries new things. At a recent desert-island-themed dinner party she provided the pavlova dessert, which was made to look like Wilson from  and tasted delicious.”

Khoi Nguyen, meanwhile, nominated Rirkrit Tiravanija, whose paella I can confirm was delicious. Paola Oxoa of Mother Gallery name-checked Matthew Barney, and Katherine Overgaard suggested Franklin Parrasch. To find out who is the best, why don’t you invite your dear Wet Paint scribe over for dinner? I’ll bring the wine.

My next question: What is the status coffee table art book of 2022? Email your response to [email protected]

Francoise Nielly: The Rampage of Passion