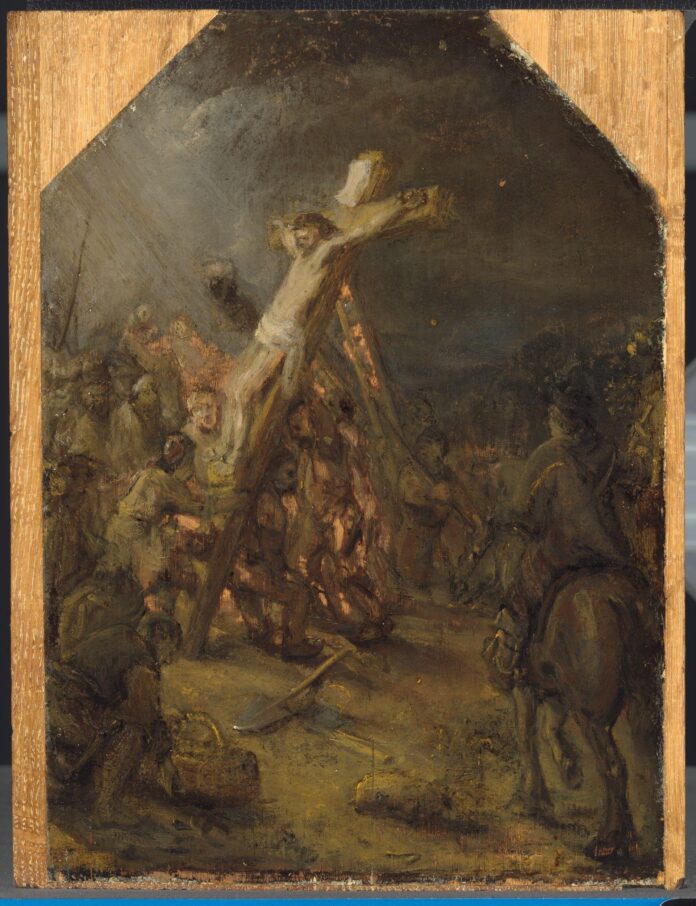 A Dutch art historian says that an oil sketch housed at Museum Bredius in The Hague, Netherlands, is by Rembrandt. Jeroen Giltaij, formerly chief curator of paintings at Rotterdam’s Boijmans Van Beuningen museum, says that he “rediscovered” the work, The Raising of the Cross (around 1645), while researching a book on Rembrandt around a year ago.

The sketch, created on a wooden panel, was first acquired by the museum’s original curator, Abraham Bredius, in 1921. According to the museum website, “Bredius bought the painting because he was very much struck by its beauty and had no doubt at all that it was a genuine Rembrandt.”

“When I was looking at it, I thought Bredius was right. I think this is indeed a Rembrandt,” Giltaij told the Guardian, explaining that the preparatory sketch “is a rough idea of what [an] actual [finished] painting could look like”.

Rembrandt’s painting The Raising of the Cross (1633) meanwhile hangs in the Alte Pinakothek museum in Munich. The sketch at the Museum Bredius is dated around 12 years later, which means it is unlikely the sketch is linked to the Munich work.

Giltaij’s attribution is corroborated by the independent, Rotterdam-based restorer Johanneke Verhave who made infrared reflectography (IRR) and X-ray scans of the sketch.

Speaking to The Art Newspaper, she says: “The most important results from the technical imaging reveal the working process regarding the composition. Rembrandt started with a composition based on the Munich painting and then shifted the figure of the horseman—the head of the soldiers—to the bottom right corner. The IRR image seems to reveal the figure of the dog here, maybe from the first [composition] set-up, which was then replaced by the horseman,”.

“The research which has been done so far is considered preliminary with the main focus [of the analysis] confirming that the [work] is indeed by Rembrandt. Now, and as we speak, the research into how the painting was made is being taken to another level by the Rijksmuseum under the lead of Petria Noble [head of paintings conservation].”