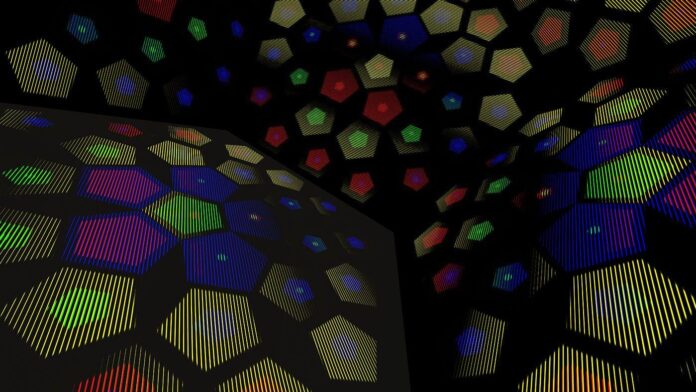 The artist Olafur Eliasson has been working in virtual and augmented reality for six years, but his latest piece, Your view matter, is far more ambitious artistically and technically than any VR work he has shown before. It also exists as an NFT, commissioned by one of the pioneers in crypto art, MetaKovan (aka Vignesh Sundaresan), who caused a global stir in April 2021 when he paid $69.3m (with fees) at a Christie’s auction for Beeple’s NFT Everyday: The First 5000 Days (2021).

The NFT of Your view matter is a one-off, non-editioned, token created for MetaKovan—its ownership and provenance captured on a permanent ledger on the blockchain—and has been minted on Polkadot, a platform regarded as having the lowest total electricity consumption and total carbon emissions-per-year of all crypto platforms.

Being conscious of the environmental cost of minting NFTs is, Eliasson says, of enormous importance, and something that he discussed with MetaKovan. “It is a relatively new field, [and] there has been a quite strong increase in that consciousness … The truth is the whole blockchain universe is actually quite progressive. It is remarkably similar to the rest of our world. A lot of talk and not as much doing. But a group of doers, too.”

AR and VR versions of the piece will be available free to view on the Acute Art app and via a link for viewing on a computer or in a VR headset. The commission came to Eliasson through Acute Art, one of the cutting-edge players in presenting art in all forms of extended reality. Both AR and VR versions “are really made to work with the largest possible audience,” Eliasson said. “Acute is very conscious of that. That was also an aim for both the client and for myself.”

For Eliasson, the NFT commission worked much as it would have with a more traditional format: “It was very much centred [on] making a great work of art.” And, on the contract implicit in the NFT format, he says: “Normally when you buy an artwork off me, you get a paper that this artwork is authentic artwork by me. There is a picture of the artwork, and a little bit of technical information. Now that is an NFT.”

For Acute Art, the piece is part of a move into the NFT space. Their artists had “perhaps been a bit hesitant” to date, according to Acute’s artistic director, Daniel Birnbaum. but working on Your view matter with Eliasson represented a chance to take the NFT into a rich, more technically ambitious space. The company’s chief technical officer, Rodrigo Marques, has created some new VR functionality specifically for the piece, according to Jacob de Geer, chief executive of Acute Art.

Your view matter is scheduled to be shown to the public for the first time in the exhibition Olafur Eliasson: Nel tuo tempo (In your time), at Palazzo Strozzi, Florence, which opens on 22 September, and at further locations, including in India.

Eliasson was featured on Acute Art early in the Covid-19 pandemic, with Wunderkammer, a charming collection of AR pieces, including a puffin, a rain cloud, and a haloed sun, well-calibrated to delight the spirits of users mired in lockdown. Your view matter exists on a higher, more primal, plane, one aligned with Eliasson’s experimental work, much of it carried out in his Berlin studio, on movement and human interconnectedness.

In Your view matter, the user moves between linked geometric spaces based on the Platonic solids, the tetrahedron, octahedron, icosahedron, dodecahedron, and cube, before concluding in a sphere. The Platonic solids—each made up of regular, identical shapes, joined in the same way at every apex—are, says, Eliasson, “mathematical small miracles. They are pre-Renaissance. They [do not subscribe] to the sense of perspective like modern architecture. They suggest ‘let’s see what dimensions are’.”

Eliasson was inspired to move into VR, he says, “from my interest in dance and movement”, and in cognition and motor skills. He has no patience with VR that suffers from what the calls the “dolphin effect”, typified by a user in VR who passively luxuriates in observing a dolphin swim around them in a “blue lagoon”. The format only comes alive for Eliasson when it is triggered by the user’s movement and visual interconnection with the artwork. In Your view matter, that “disturbance”, the distortion of the moiré effect, is animated when the user moves their head and eyes, overlaying the close-hatched patterns in his surfaces—some brilliantly coloured, some in black and white—over the pixels of a computer or phone screen, creating a scintillating, ambiguous, random, effect. The user is the “you” who “matters” in the piece.

For Eliasson, working on Your view matter has reinforced the “drivers” behind his work in VR. “I always start out with what is the human potential … We must cultivate the awareness of people in VR that says I actually exist, I am here, I am important, and I am good enough.” He is inspired not by commercial VR but by what is being done in the laboratory. One of his mentors in the format has been the anthropologist Joe Dumit, professor of anthropology and science & technology studies at the University of California, Davis, and a leading figure in the world of science & technology studies (STS). Dumit has been a frequent visitor to Eliasson’s studio. “He is also a kind of an alpha electronics tester person from the perspective of the body… the first person I have met who is unbelievably informed on VR.”

Another of Eliasson’s inspirations is Natasha Myers, an associate professor of anthropology at York University, and a radical thinker on the interaction between humans and plants. To Eliasson she is “one of the most interesting interdisciplinary minds in STS”.

For Eliasson, radical thinkers like Dumit and Myers, concerned with how humans move and feel in space, are among the “people out there that make me face forward to the future [of the planet]. That we are not going to be OK. But if there were more people like this generation we might just make it.”

Italian Police Confiscated a $4.2 Million Rubens Painting From a Genoa Exhibition as Part of a Fraud Investigation