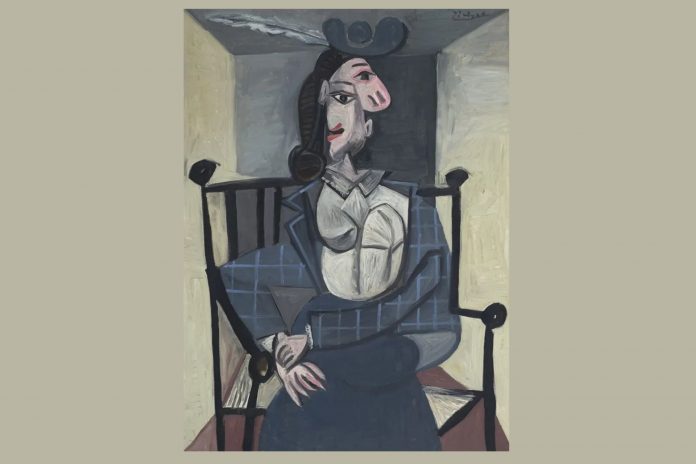 Pablo Picasso’s 1941 painting Femme dans un fauteuil depicting the artist’s muse Dora Maar will be dedicated to an evening sale of 20th-century art at Christie in New York on October 6. It is estimated at between $ 20 million and $ 30 million.

During the Nazi occupation of Paris, Picasso (1881-1973) created a series of paintings by his beloved Maar in his left-bank studio, all of which she wore similar blue outfits and various branded hats. creation. Many examples are now kept in museums, including the Picasso Museum in Paris; Basel Art Museum, and New Pinakothek, Munich; according to Christie’s.

Conor Jordan, Christie’s vice chairman for Impressionist and Contemporary Art, said in a statement that the current Femme assise, isolated in the cool light and sharp corners of the attic, portrays Dora on a grand scale proud and unyielding. majestic disobedience, modern Marianne.

In 1945, Femme dans un fauteuil was included in the landmark Matisse-Picasso exhibition at the Victoria and Albert Museum in London. It is the first major British institution which exhibited Picasso’s work after the war.

Many things never go out of style, and in the art world, Picasso continues to be an artist whose name is associated with greatness and a heritage that is second to none.

This prolific artist has produced over 20,000 paintings, drawings, prints, sculptures, and photographs, all in addition to applying the Cubist style to collage techniques.

The artist’s 1941 painting, Femme dans un fauteuil, will now go under the hammer at Christie’s 20th-century art sale in New York City on October 6 and is expected to be prohibitively expensive.

Many artists are partial to muses, and when it comes to Picasso, Dora Maar was one of his greatest painters. Maar met the artist in 1936 and over the course of their nine-year relationship, which, given Picasso’s personality, was extremely turbulent, he painted her many times.

In 1941, given that Paris was heavily occupied by the Nazis and the streets were in chaos, they were both confined to Picasso’s workshop, where he was inspired to be creative every day and his painting style flourished.

Unsurprisingly, Maar’s portraits are among his most valuable paintings. The Weeping Woman is considered to be one of his most famous works of Maar in dire condition. But while the story limited Maar mainly to the role of one muse, she was actually an accomplished artist, photographer, and poet herself.

Explaining this period, Conor Jordan, Deputy Chairman of the Board for Impressionists and Contemporary Art at Christie, said in a statement: “When the second year of German occupation began in Paris, Picasso retired to his left-bank studio on rue Gran Augustin and executed the stunning figure. a series of paintings by his beloved Dora Maar. Alternately agonizing and lyrical, aggressive and dull, all the works share urgency, making them as expressions of Picasso’s state of mind as Dora’s portraits.

Christie’s auction will be the first time the painting will be up for auction, and already the buzz surrounding the famous work is high. Christie’s expects about $ 30 million for it. Time will tell, but given the aura that surrounds any piece by Picasso, it certainly looks possible.

The most expensive paintings in the world

Ironically, Picasso’s works of the blue and pink period, when he literally survived, are now breaking all cost records at world auctions.

The star of art auctions, the best-selling artist in the world, Pablo Picasso, at the beginning of his career in art, was not just poor, he was in real need. Poverty, hunger, and cold. His visits to the Louvre in the early 1900s, while living in a dilapidated hostel in Montmartre, were associated not only with his greedy interest in the work of his predecessors but also with the desire to elementary warmth.

But by the end of the 1900s, not only individual collectors had already discovered it. Even before his 30th birthday, he began to sell well – and since then he has always been surrounded by art dealers, collectors, and other connoisseurs.

He became a millionaire during his lifetime and is still extremely successful at bargaining on the art market, the prices of his works are shaken every year by auctions.

As an artist, Picasso used a wide variety of creative styles, including Cubism, Abstract Art, Neoclassicism, Surrealism, and Expressionism. The early works of Picasso date back to 1901 and 1904, now they are called the “blue period”.

They convey gloomy themes of poverty and despair, painted in monochrome blues with elongated, twisted bodies with distorted features. However, in 1905, Picasso redirected his attention to other themes, depicting harlequins and other carnival characters, in vibrant shades of red and pink. Now this time is called the “pink period”.

By the early 1930s, Picasso was increasingly immersed in the Cubist style, as seen in all of his works, he turned to bolder colors and more complex contours.

All of this appeals to surreal, biomorphic motives. His artistic innovation allowed him to continue to create many of the works for which he gained fame and wealth.

Many of his works have received a place in the ranking of the most expensive paintings in the world. After Picasso, there was a huge artistic legacy that is still discussed and continues to excite the art world.

Let’s take a look at the 10 most expensive and talked about paintings by Pablo Picasso. 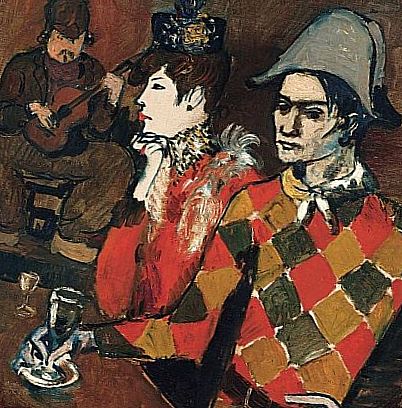 Harlequins and circus performers, presented in brighter and more cheerful colors, are very different from Picasso’s melancholy “blue period”. “Harlequin with a Glass” was originally created to decorate a bar in Montmartre.

It was rumored that the artist painted the picture in exchange for free meals at the famous cabaret in Paris. When it was finished, Picasso showed the work to Freda, the cabaret owner, who then sold the painting for $ 20 in 1912. In 1952, the work was acquired by the collector Joan Whitney Payson. Then the painting costs $ 60,000. The work, in the end, was sold at Sotheby’s for $ 40.7 million. 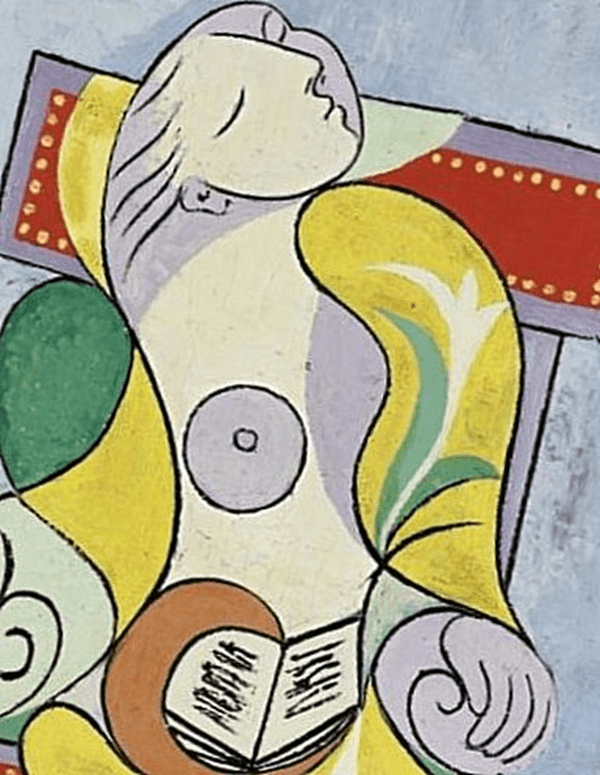 This oil portrait depicts Picasso’s mistress and muse, Marie Teresa Walter, who fell asleep with a book in her lap.

Picasso met seventeen-year-old Marie in 1927 when she was leaving the Paris subway, then they began a love affair, which they kept secret due to the age difference, and the fact that Picasso was at that time married to Olga Khokhlova hindered.

Then, seeing in the artist’s works, not her facial features, Olga realized that her husband was having an affair, and the marriage soon fell apart. Picasso painted “The Reading” from December 1931 to January 1932, researchers call this time “the period of love madly.” The painting was sold at Sotheby’s in 2011 for $ 40.7 million, the buyer chose to remain anonymous. 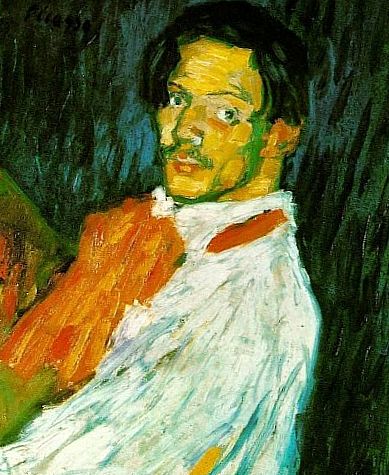 This self-portrait by Picasso, dated 1901, is attributed to the “blue period”. Although the artist sold paintings at that time with difficulty, he had already managed to gain popularity. In 1981, at the Sotheby’s auction, the work went to the famous collector Wendell Cherry for $ 5.8 million. 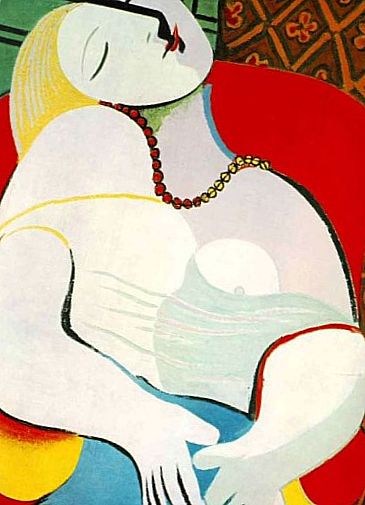 While the owner had planned to sell it for $ 139 million prior to this incident, he decided not to auction the painting and took it back. Thus, The Dream remains in the Wynn Collection to this day. 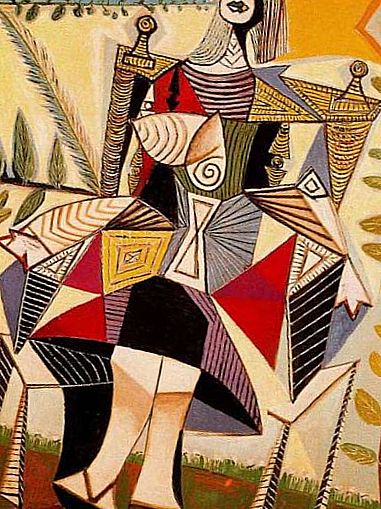 By this time, Picasso was carried away and began to experiment with Cubism. This 1938 painting depicts Dora Maar in a garden. The French artist, photographer and poet was known for being Picasso’s mistress. The portrait is a work performed in a pronounced style of cubism, an avant-garde movement of the early 20th century, in the promotion of which Picasso invested much effort

It is known that the artist completed this famous work within a day. In 1999, the work was sold at Sotheby’s for $ 49.5 million. 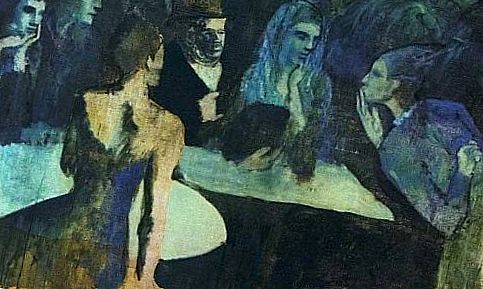 This painting by Picasso, dated 1905, belongs to the “blue period”. The monochrome color palette with shades of blue lends a gloom to the work. The scene itself contrasts with the shades: a festive mood is depicted, the Harlequin admires the bride. The presence of blurry elements in the background suggests that the picture may not be finished, although the researchers say the opposite.

Art dealer Joseph Stranski, a friend of Picasso, received the painting in 1907. However, between 1945 and 1962, it came into the possession of Paulo Picasso, the artist’s son. Financier Frederic Rousse bought the work and presented it as a gift to the French government. In 1989, the painting eventually went up to auction and sold for $ 51.3 million. 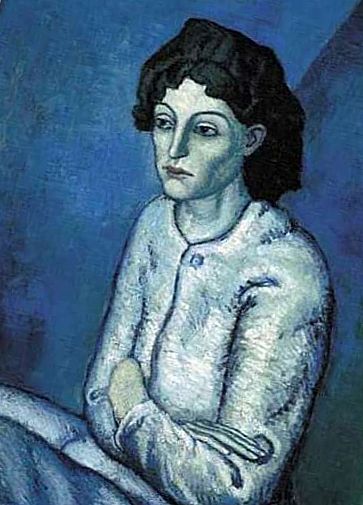 This work belongs to Picasso’s “blue period”. The heroine of the picture, presumably, was a patient of the Saint-Lazare prison hospital in Paris. Gertrude Stein, writer and art collector, was one of the owners of this painting. Picasso also painted a portrait of Gertrude herself in 1906.

In 1936, “The Woman with Arms Crossed” came into the possession of the collector Chauncey McCormick and remained there until 2000. At this time, it was put up at the Christie’s auction, where it was bought by an anonymous buyer for $ 55 million. 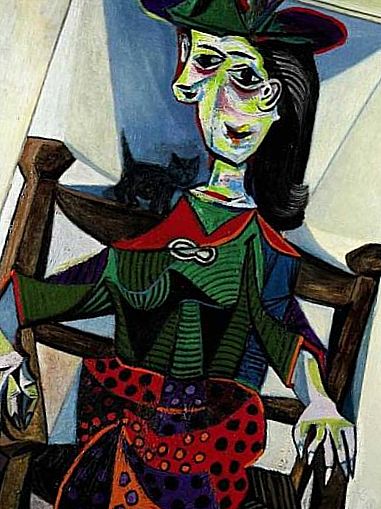 The subject of this painting is the surrealist photographer Dora Maar, one of Picasso’s most famous muses and mistresses. The work depicts Dora sitting in an armchair, while a small black cat stands behind her. 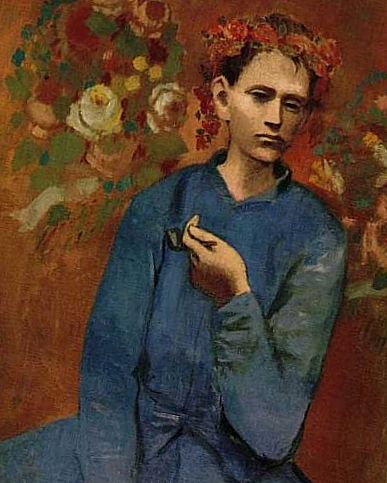 This portrait shows a boy wearing a crown of roses holding a pipe in his hand. The colors used in the painting indicate that it belongs to the “pink period” when the artist preferred to use cheerful oranges and pinks, as opposed to the dark and cold colors of the “blue period”.

John Whitney, the American ambassador to Britain, was the first to acquire the job in 1950 for $ 30,000. The painting remained in Whitney’s private collection until 2004. By then, Whitney’s wife had founded the Green Tree Charitable Foundation after John’s death in 1982. In 2004, the painting was exhibited at Sotheby’s and sold for $ 104 million, exceeding the preliminary estimate of experts. 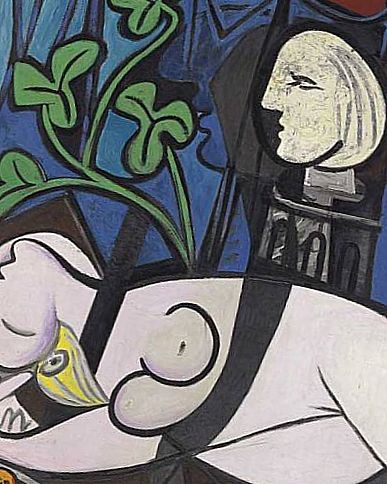 This most expensive work of Picasso depicts the artist’s muse and mistress, Marie Theresa Walter, in the nude. Her bust is a sculpture that Picasso sculpted in 1931. The artist painted a picture in one day, and this work represents a successful stage in his career. The painting belongs to the list of the most expensive items sold at auctions.

Picasso had improved his skills by this time and therefore began to use symbolism in his work. In 1952, collectors bought this painting for $ 17,000 and it remained in a private collection until 2010 when it was sold at Christie’s for $ 106.5 million.

Bonhams Achieves its Highest Total for Asia Week at $16.96 million