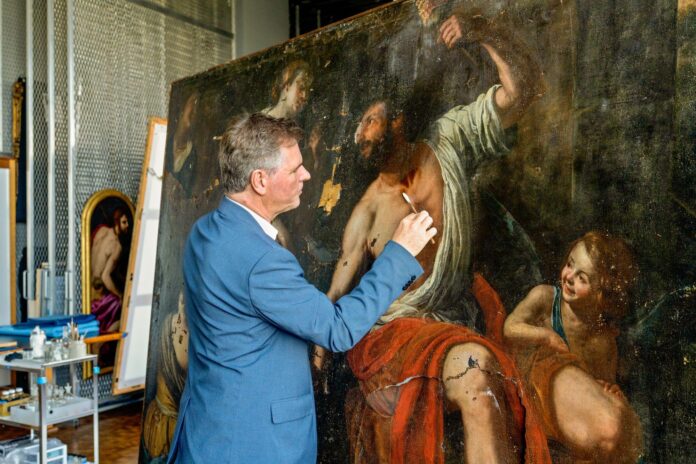 A painting rescued from the debris of a historic mansion, destroyed by the 4 August 2020 double explosion in the port of Beirut, has been identified as a long-lost painting by the 17th-century Italian artist Artemisia Gentileschi. It is currently undergoing restoration at the J. Paul Getty Museum in Los Angeles before returning to its former residence, the Sursock Palace, the Getty announced this week.

The large-scale work depicts the figures of Hercules and Omphale and had previously been attributed to an anonymous artist. It sustained significant damage from the catastrophic blasts, which caused more than 200 deaths and reduced buildings to rubble. Images of the work show rips throughout the canvas, including a long, jagged tear that runs along Hercules’ knee and calf.

Timothy Potts, the director of the J. Paul Getty Museum, described Hercules and Omphale in a statement as “one of the most important recent discoveries within the corpus of Artemisia Gentileschi, demonstrating her ambition for depicting historical subjects, something that was virtually unprecedented for a female artist in her day”.

Key to the painting’s rediscovery is the research of Gregory Buchakjian, a Lebanese art historian who studied the work in the early 1990s. Buchakjian had attributed two canvases to Gentileschi while working on his master’s thesis in Paris, which focused on the paintings in the collection of the Sursock Palace, a grand family home built in the mid-19th century that stands opposite the Sursock Museum. But his research was unpublished until he wrote about it in Apollo Magazine a few months after the Beirut explosion, following a visit he made to the devastated mansion. The article garnered wide interest and led to Buchakjian presenting his research at a conference organised in 2021 by the Medici Archive Project in Florence.

As evidence of the paintings’ authenticity, Buchakjian pointed to elements such as subject matter and drapery that aligned with known works by Gentileschi. He also noted how the handling of jewellery in Hercules and Omphale, in particular, was “characteristic of her art throughout all periods of her long career”.

The smaller work, a portrait of Mary Magdalene, has since been restored and displayed at the Musei di San Domenico in Forlì, Italy. Hercules and Omphale is at the Getty under a loan agreement with its owner, Roderick Sursock Cochrane, whose mother had lived at Sursock Palace throughout her life and died at the age of 98 after sustaining injuries from the blast.

Sheila Barker, a leading Gentileschi scholar, told the New York Times that the painting brings the number of known works by the artist up to 61. “I don’t know of anyone who has a dissenting opinion,” she said. “A lot of would-be Artemisia paintings have come along hopeful of attaining consensus from the market and scholars, and we’ve been largely disappointed. And yet from this completely unexpected corner of the southern Mediterranean, there has emerged this stunning example of Artemisia’s mature genius.”

Hailed by many as a feminist icon—her work of Judith beheading Holofernes in particular upheld as an portrait of women’s liberated rage—Gentileschi has received renewed scholarly and public attention in recent decades. In 1976, her painting of Judith and a maidservant with the head of Holofernes was included in the touring exhibition Women Artists: 1550-1950, curated by Ann Sutherland Harris and Linda Nochlin, who had discussed Gentileschi in her acclaimed essay, “Why Have There Been No Great Women Artists?”. In 2020, a blockbuster Gentileschi survey was mounted by the National Gallery in London.

Hercules and Omphale is set to go on view at the Getty at the end of 2023, after which it will return to Sursock Palace. An international effort led by Unesco to restore the Beirut building and reopen it as a private museum is currently underway, and it is scheduled to be completed in 2025. The French Ministry has pledged €500,000 to the project; additional funding from Switzerland, announced earlier this month, will enable Unesco to begin the first phase of the rehabilitation.