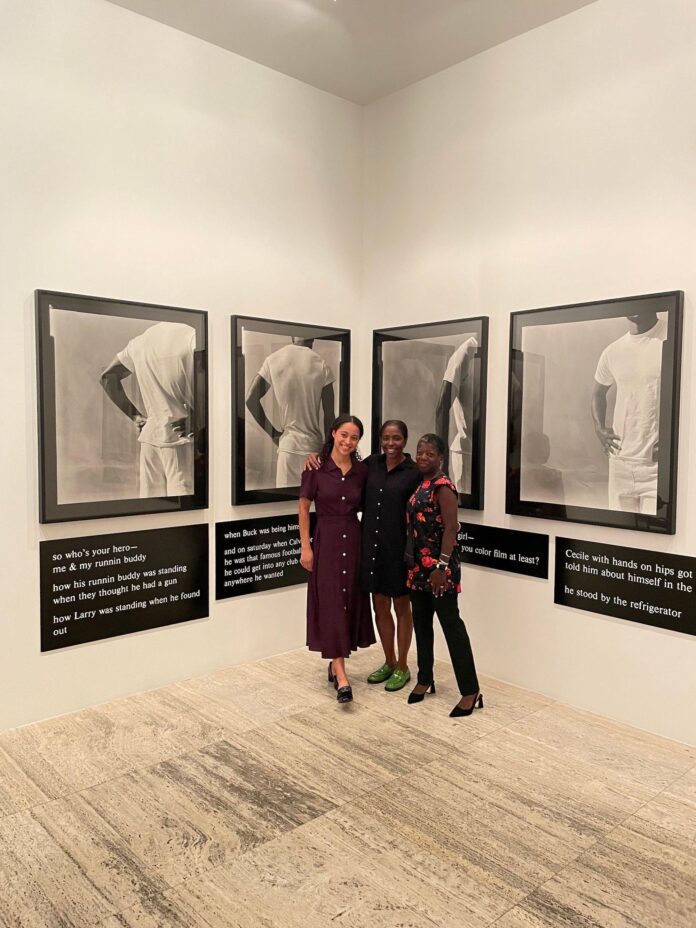 Like seasons, art fairs come with their meteorological signals. The Armory Show’s previous March slot always seemed to coincide with a snowstorm. When Frieze was in its Randall’s Island tent, a downpour never failed to dampen the festivities. After the pandemic shuffled these dates and locales, The Armory last year settled on the first week of September, which also overlaps with the art world’s back-to-work week—and this year a mellow fall breeze has accompanied fairgoers stomping in and around the Javits Center.

Before VIPs were even admitted to the main fair, the week took off with programming around the city. On 6 September, Hauser & Wirth’s Upper East Side outpost held a gathering for Lorna Simpson’s new show of photographic work created between 1985 and 1992 (until 22 October), a period marked by body politics and the devastation of the Aids crisis. Simpson, her daughter Zora Casebere and Studio Museum in Harlem director Thelma Golden sat down in front of a crowd to look at the era through the present experience of yet another pandemic and crisis around bodily autonomy and authority. “The issues of the time back then are still germane today,” Simpson told her daughter.

Later in the evening, independent curator and Performa associate curator at large Job Piston held a screening of “Excelsior”, a programme of video art by eight artists of Asian descent at the Quad Cinema as part of the Art at a Time Like This initiative. “From back alleys in Norway to bunkers in Berlin and bars in Taipei,” Piston said of his research for “Excelsior”, which included videos that respond to the curator’s question: “If you could self-mythologize your origin story, what kind of world would you create?”

On 7 September, the rain gave up its insistent pour and let the partygoers enjoy a whirlwind of events around town. “Just don’t walk towards the back,” Jeppe Hein told me about staying dry inside his water fountain sculpture, Changing Spaces, at Rockefeller Center. Since June, the dancing sprinklers have been keeping New Yorkers and tourists cool during this summer of heat waves—so much so that the installation has been extended until 13 October. Hein and a few of us gathered by the fountain to celebrate the breezy sculpture and made our way to luxe eatery Eleven Madison Park. Hein gathered us around a round table to practice his breathing painting technique which meant each of us—including his friend and the restaurant’s star chef Daniel Humm—painted a blue line on the tablecloth for as long as we could slowly exhale.

Next stop was The Armory Show’s Collectors’ Soirée at Fasano Restaurant, where live piano accompanied Maestro Dobel tequila and chatter about the install-day stresses at the Javits Center. Also on Wednesday night, Sean Kelly celebrated its new shows with Brooklyn painter Landon Metz and Nigerian-American artist Anthony Akinbola (both until 22 October) on the 90th floor of a Hudson Yards building. The airiness of looking down on the city’s lights matched the feeling of looking at Metz’s winding abstractions at the gallery hundreds of feet below.

But the loftiest gallery party of the night was the celebration of 56-year-old Parisian gallery Templon’s first New York space, fittingly held at the Standard Hotel’s gilded Boom Boom Room. The last time many of us had been there was for The Armory Show’s own party in the first week of March 2020, amid a crowd unfamiliar with terms like “social distancing”. Brooklyn- and Dakar-based painter Omar Ba, whose solo show of new paintings (until 22 October) inaugurated Templon’s Chelsea space, welcomed guests who sipped champagne and swayed on the pink carpeted floors.

On Thursday (8 September), with 8pm approaching, VIPs left The Armory Show’s vernissage for various parties all across town. Some ventured just a dozen blocks south of the Javits Center, where many Chelsea galleries were opening their new exhibitions. Among them is Philippines-based Silverlens, with solo shows by Martha Atienza and Yee I-Lann (until 5 November) inaugurating the gallery’s 2,500 sq. ft New York outpost. Gallery owners Isa Lorenzo and Rachel Rillo, who also share life together, established Silverlens 18 years ago in Manilla to provide visibility to Southeast Asian artists, particularly those who are women and queer-identifying.

On the east side, Park Avenue South saw an unusual huddle of punky queer kids, all lined up to enter Fotografiska’s party for its new David LaChapelle exhibition. Make Believe (until 8 January 2023) spans the groundbreaking photographer’s four-decade career and the museum’s six floors. Those lucky to enter gathered at the museum’s gothic chapel and looked at images of Alexander McQueen, Naomi Campbell, Kim Kardashian and David Bowie filtered through LaChapelle’s signature and unabashedly campy lens.

Uptown, Berlin’s Sprüth Magers celebrated its new Big Apple space, which is tucked in a chic Upper East Side townhouse with immaculate crown molding. The opening of the gallery’s John Baldessari exhibition (until 29 October) was followed by a dinner at Sistina where champagne was poured from a magnum-size bottle. Down in Soho, Independent 20th Century’s party at the Blond and Kasmin Gallery‘s at soirée at Little Ways were conveniently situated just an eight-minute walk apart. The disco ball-lit celebration for Kasmin’s vanessa german and Sara Anstis shows (until 22 October and 29 October, respectively) helped the crowd dancing off the exhaustion of the fairs’ first day.