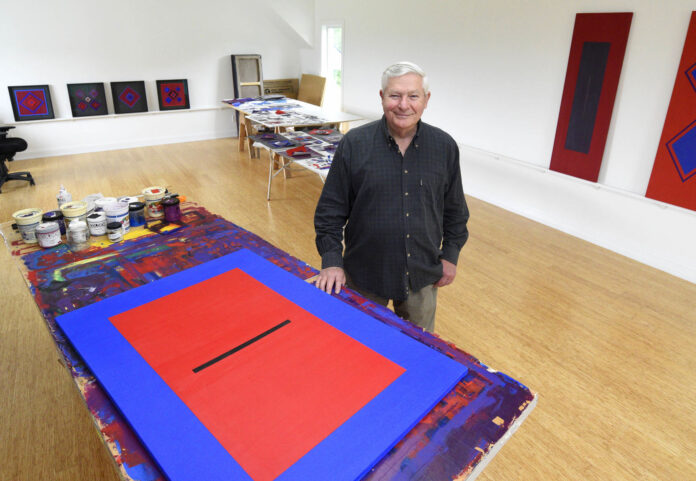 Color vibration seems to levitate rigid geometry in the paintings and collages of Vermont artist Paul Gruhler. For over 60 years, Gruhler has explored the endless compositional variations achievable in a powerfully focused set of three simple shapes: square, rectangle, and line of varying sizes, sometimes tilted along their axis, held suspended. It is an animation by matching colors that sing when they touch.

Paul Gruhler’s paintings are dominated by blue, red, and purple tones. The tonal range is from medium to dark. These pictures do not require attention. They hum.

Every morning at 7:00 a.m. Grühler is at his Craftsbury studio and gazes calmly at the ever-changing light on the nearby Belvedere Mountain. Paul Gruhler artist meditates as he prepares to begin his day’s work, which may include painting with acrylics on canvas or assembling geometric paper cut shapes into abstract collages.

His methodology is intuitive, not formulaic. At the age of 80, Paul Gruhler artist is still active and stubbornly pursuing a transcendental experience in art. Elements of his approach are reflected in the color-saturated work of Mark Rothko or in the analytical limited color geometry of the German abstractionist Josef Albers, but Grühler developed his own visual language.

It is noteworthy, given the consistency and mesmerizing quality of Gruhler’s richly colored, gem-like surfaces, that he is no better known outside of his close-knit group of friends and admirers.

Paul Gruler – Harmonics: 60 Years in Art, Chelsea Series 1963-1978, opening at the Highland Center for the Arts in July provided an insight into his early work. The three additional exhibitions, which opened in September at the Vermont Supreme Court Gallery, Vermont Arts Council: Spotlight Gallery, and Gallery at Vermont Central Medical Center, span the various phases of Gruhler’s work.

They are extended for the end of 2021 and provide a complete picture of Paul Gruhler’s career.

Paul Gruler was born in 1941 in Brooklyn, New York, and raised in neighboring Queens. A self-taught artist, he opened his first studio in Manhattan in 1962 at the age of 21 and entered the city’s competitive art world.

Paul Gruhler was fortunate from the outset in his relationship with prominent senior artists who became mentors and friends, most notably the famed sculptor Michael Lekakis, who had exhibitions at the Guggenheim, Whitney, and the Museum of Modern Art.

Lekakis took the young Gruhler under his wing, helping him navigate the avant-garde art scene in New York and introducing him to renowned artists including:

Meanwhile, Gruhler’s own work has been exhibited in galleries and museums in the United States, Mexico City, Finland, Germany, the Netherlands, and Sweden.

After moving to Vermont in 1993, Paul Gruhler now lives in Craftsbury, in the Northeastern Kingdom of the state. The artist continues to work daily in his studio, which overlooks the Vermont Green Mountains. Gruhler’s paintings are in numerous national and international public and private permanent collections.

The 128-page book chronicles Gruhler’s career and contains essays by Caroline Bauer. Featuring stunning reproductions of over 130 paintings and spanning a 60-year career, the reader will follow Paul Grühler the artist from the early 60s art scene in Manhattan, New York, to the quiet hills of Vermont.

Gruhler may have explored material variations and extraordinary color schemes over the years, but for six decades he stuck to one style: rigid geometric abstraction.

For Paul Grühler, the charm of these compositions lies in the balance of tension created by shapes and colors. He mixes his own colors, using each one just once, and donates additional paint to the Howard Center in Burlington. It was only recently that Gruhler realized that he needed to document his paint recipes: “I needed to tweak something and I had no idea what was in it,” he said.

Paul Gruhler artist adhered to geometric abstraction. He has endless admiration for color and shape. It’s incredible how many variations you can make with just these elements. And over time, he brought it to perfection.

Musician and Creator Gary Powell announces ‘THE INVASION OF…’