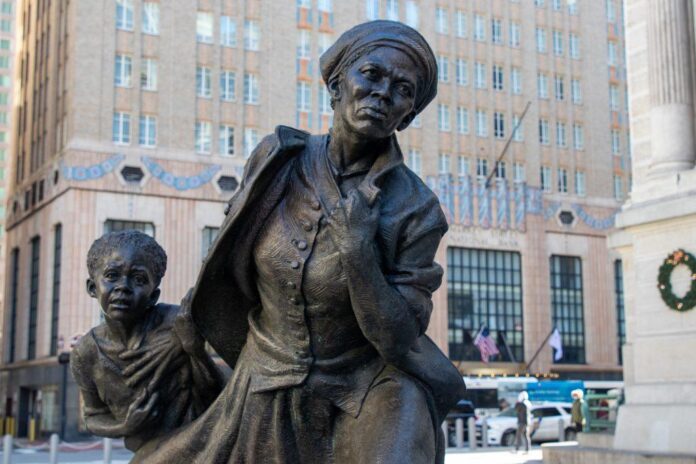 The city of Philadelphia is under fire for a planned Harriet Tubman monument, with members of the public speaking out against the selection of Wesley Wofford, a white male artist, for the project without an open call for other proposals that would have included artists of color.

The statue, which was announced in March, will be the city’s first monument to a historical Black woman. A public input survey for the project, which is expected to cost $500,000, is open through July 13, but it is already clear that some people find the commission controversial.

On June 15, the city held a virtual public meeting for input about the sculpture. Numerous attendees expressed their objections to Wofford’s selection. If creating Philadelphia’s first Tubman monument was a nod to diversity and representation, wouldn’t it be natural to award a Black artist the commission—or at the very least give Black artists the opportunity to submit potential designs for the work?

“As an artist, it’s hurtful and it is traumatizing,” textile artist Dee Jones said during the meeting. “If it was an open call and Wesley was chosen, it would be fine… But because the process wasn’t open, that’s the big issue.” 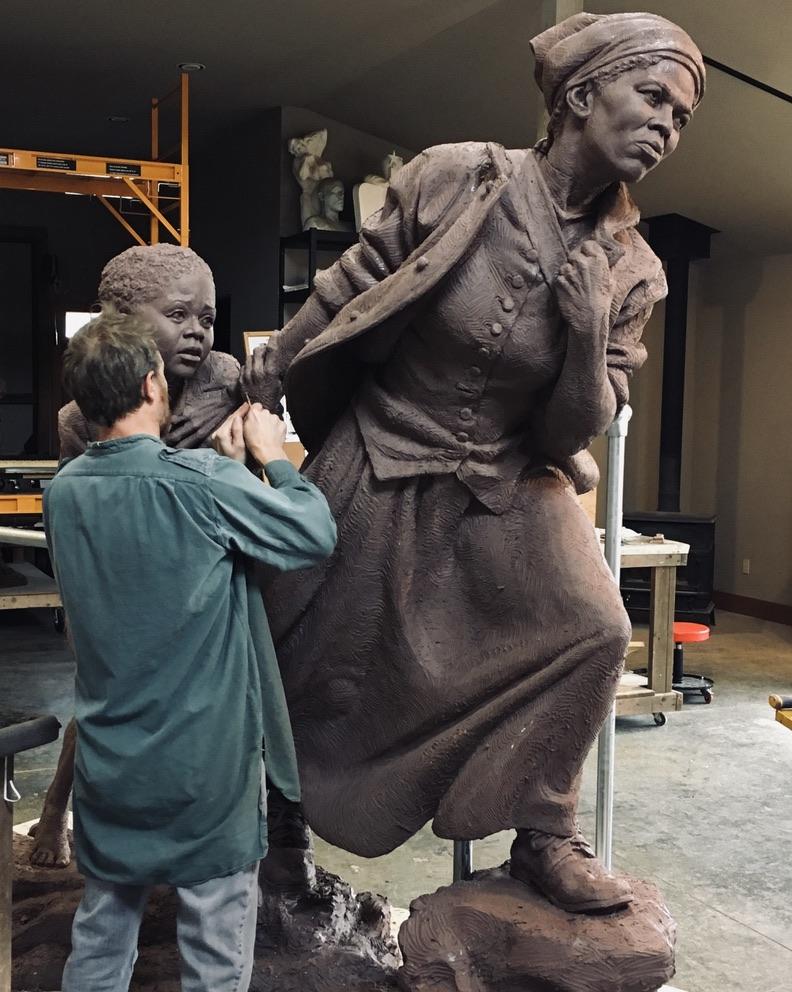 Wesley Wofford working on . Photo courtesy of the artist.

“I’m not in support of this artist doing the work,” Leslie Garrett added. “Nothing personal against him, but just the fact that I think it should be an African American doing this work.”

For his part, Wofford wasn’t completely surprised by how the meeting went.

“I think the elephant in the room is my gender and the color of my skin, and it would be naïve to not acknowledge and discuss that,” Wofford told Artnet News in an email. But he believes that if there is an obligation to make our monuments more representative of the diversity of U.S. society, he shares in that, regardless of his race.

“When I look at the National Monument Audit by Monument Lab, the job we have ahead of us is enormous,” Wofford added. “If every American figurative artist alive today were to work full time on monuments commemorating underrepresented groups and stories, it will still take us decades to even begin to level the playing field in our public squares. We all need to work together to make our public spaces represent our collective, authentic, and diverse achievements.” 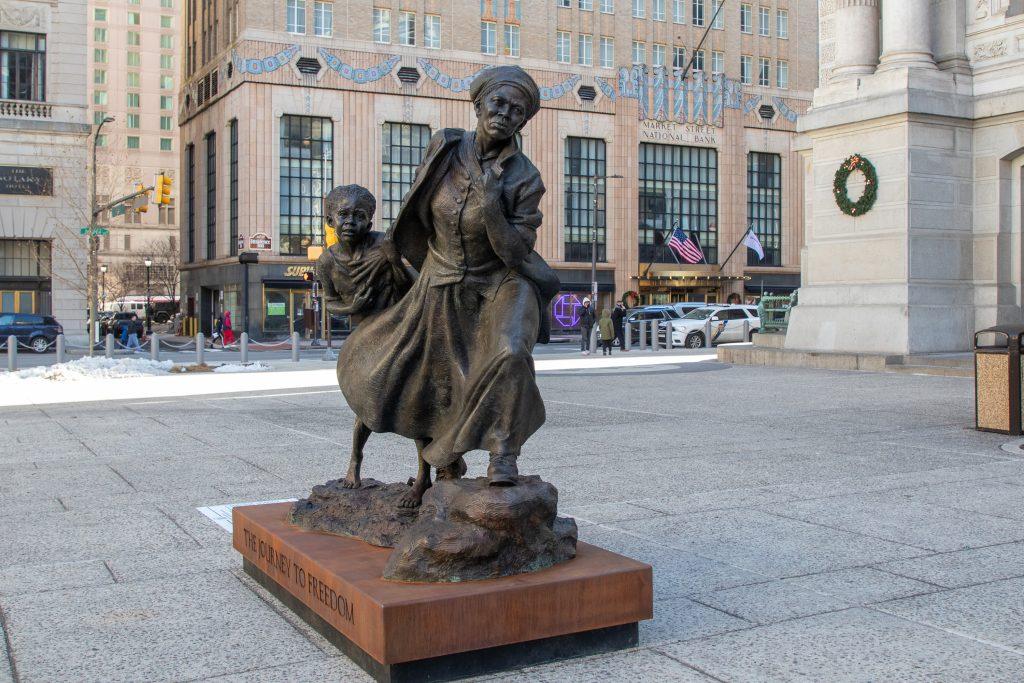 For most public artworks, Philadelphia does hold an open call, and the city policy is to “prioritize minority and female artists, artists who reflect the diversity of the community where the artwork is being installed,” Kelly Lee, the chief cultural officer for the city and the executive director of Philadelphia’s Office of Art, Culture and the Creative Economy, told Artnet News in an email. “However, this is a unique situation where the city is not starting from the beginning.”

The seeds for the Tubman memorial were first planted in November 2020, when the Creative Philadelphia office encountered Wofford’s piece . The artist, who is from North Carolina, originally created the statue in 2019 as a commission for a private building in Dallas.

Immediately, he became inundated with messages on social media from people who wanted to see the work for themselves. The nine-foot-tall original was not open to the public, so Wofford and his studio decided to fabricate a seven-foot-tall copy to go on tour. 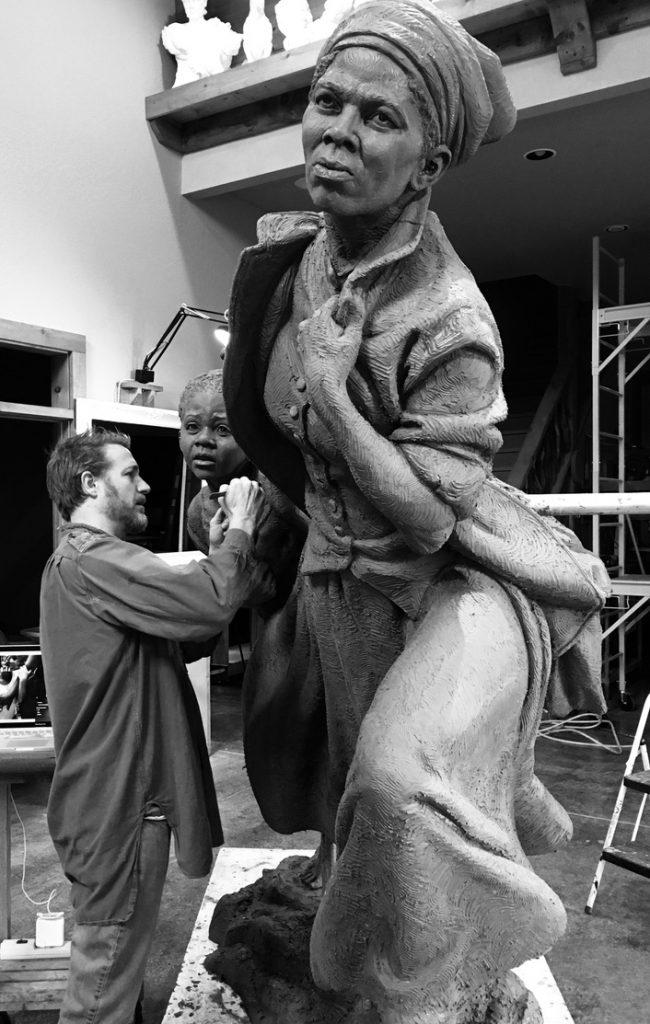 Wesley Wofford working on . Photo courtesy of the artist.

“It has awakened an activism in my work that will resonate for decades,” Wofford said.

Philadelphia is among the 22 cities that have hosted or booked the statue to date. At the city’s request, Wofford installed in the City of Brotherly Love in January, in honor of what would have been the great abolitionist’s 200th birthday. It was on view through the end of March and was, to the city’s mind, an immediate success.

“Close to four million people shared images, commented on the beauty and likeness of the statue, and expressed how deeply the statue made them feel,” Lee said. “In response to the positive feedback, the city asked to purchase .”

Because Wofford had already committed to touring the work across the country, the city instead moved to commission an original work by the artist for its public art collection, meant to evoke the same spirit of Journey to Freedom. To ask another artist to complete that work, when the entire proposal was inspired by Wofford, the city said, would be unfair to both parties. 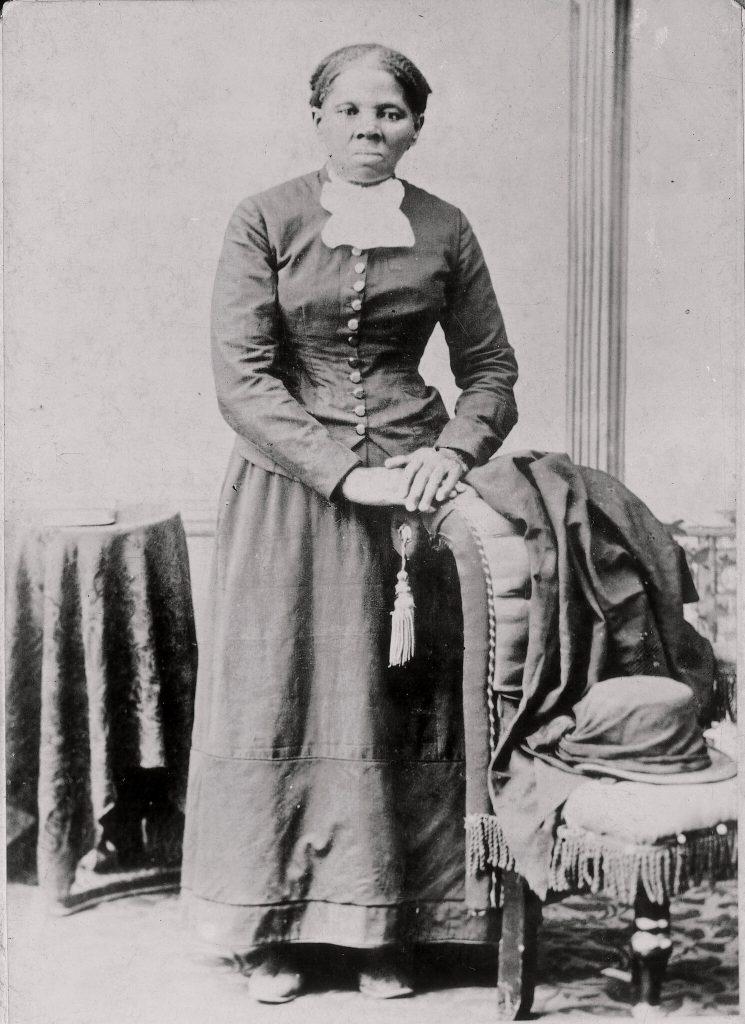 Harriet Tubman (ca. 1860–75). Photo courtesy of Harvey B. Lindsley, courtesy of the Library of Congress.

But for some Philadelphians, having a white artist behind the piece is problematic.

“[Wofford] is renting and selling her from city to city, just like from plantation to plantation. It’s just awful, and it enrages me,” Maisha Sullivan-Ongoza of the Sankofa Artisans Guild told the .

But Wofford said such a characterization of the traveling monument “could not be further from the truth. We considered the financial risk to ourselves because we had no idea if it would actually work or be received, and decided it was just too important and a unique way to elevate Harriet Tubman’s legacy.”

The statue carries a lending fee of just $2,000 a month, to help cover logistics, and, eventually, the actual costs of the bronze casting and fabrication work, Wofford added.

“We sell nothing at any venue,” Wofford said. “Each location has a group of activists or organizers that build specific programming around telling Harriet-centric stories as well as lifting other Black American stories.”

The permanent sculpture will be an especially meaningful addition to the Philadelphia’s urban landscape because Tubman made her way to the city after escaping slavery, and helped others follow in her footsteps as a conductor on the Underground Railroad. (Philadelphia also has plans for a statue of Marian Anderson, a public art memorial for the Bethel Burying Ground, and a permanent exhibit celebrating Reverend Dr. Leon H. Sullivan.)

The Tubman sculpture is set to be erected on a granite base in front of City Hall, on a raised section of ornamental stonework known as the north apron, by November 2023. The city is considering three possible themes—“Lifting As We Climb,” “Lessons From Harriet,” and “Overcoming Adversity”—for the sculpture. 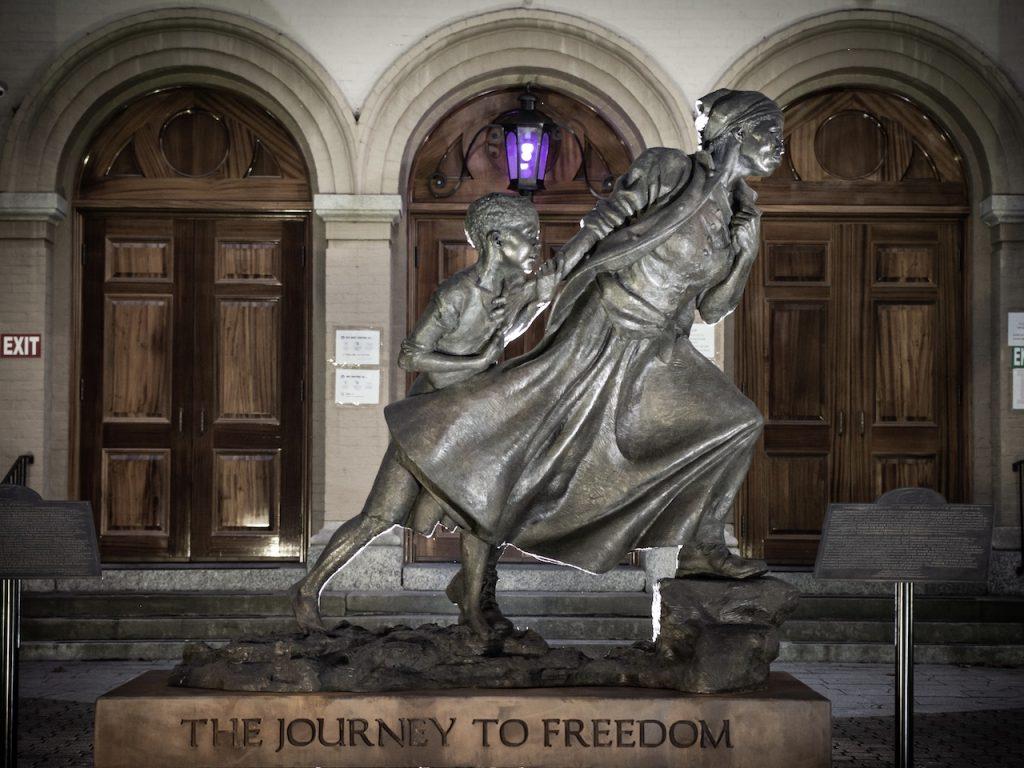 Wesley Wofford, in Dorchester County. Photo courtesy of the artist.

“When a sculptor’s up there on that ladder either carving or doing the clay work, it is very important for us as Black people to see that process take place, especially amongst the young people, to inspire them to do those kinds of processes—to be sculptors, to be monument makers,” sculptor Ogundipe Fayomi, who created Brooklyn’s monument to African American astronaut Ronald McNair, who died aboard the, said in the meeting. “We have to be able to show our value, our creativity, and that we can do things, rather than other people doing things for us.”

“These concerns are important and point to a real issue of the lack of Black stories being told through public art,” Lee acknowledged, but insisted that “we are not considering cancelling the commission.”

And despite the feedback at last month’s meeting, Woffold remains committed to the project.

“I am an ally of the untold stories, and if asked, I want to assist in people telling their stories in our public spaces,” Wofford said. “Saying no would not only be insulting, but would rob us all collectively of building the healing bridges and symbols that will bring us together.”

He hopes that this will be just the first Tubman memorial in Philadelphia.

“How many Benjamin Franklin statues exist within the city, both publicly and privately funded?” Wofford asked. “I can think of several specific locations within the city that would further amplify Harriet Tubman’s legacy and tell her important Philadelphia story—I think we need to do them all.”