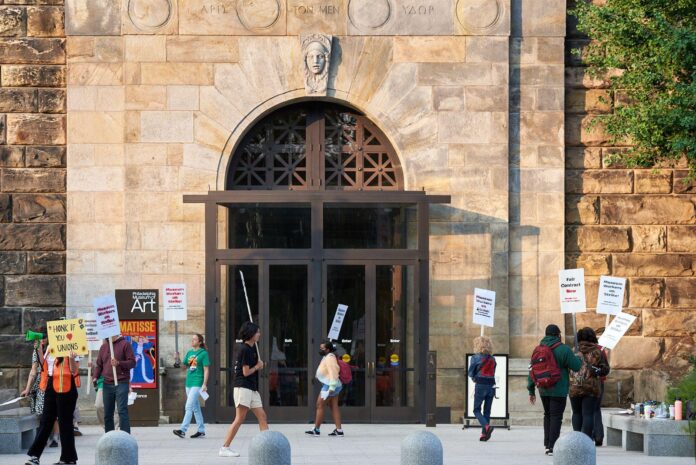 Workers at the Philadelphia Museum of Art (PMA) held a one-day strike on Friday (16 September) at the museum’s main building as well as its neighbouring Perelman Annex and the nearby Rodin Museum, which is administered by the PMA. About 160 people took part in the action, including workers of the PMA union as well as members of the local American Federation of State, County and Municipal Employees (AFSCME) DC 47 and Local 397 (the PMA union is also part of the AFSCME).

“The message we’re trying to send to management is that we can effectively shut down the museum,” union president Adam Rizzo says. “It’s the workers who make the museum the wonderful place that it is. And given that we have workers in virtually every department, I think it sends a really powerful message and we expect that they’ll come to the table with a very different attitude next week. And if they don’t, then we’re going to have to reevaluate and get ready to escalate even further.”

The union launched a strike fund over the summer. The fund is being used to help compensate workers’ pay that was lost as a result of Friday’s strike.

“It’s a really important moment for the museum right now. We’re in a transitional moment where the new director starts next week,” Rizzo says. “There’s an opportunity for [incoming director and chief executive Sasha Suda] to kind of right this ship if she wants to and if she’s given the power to do so by the board of directors. And then it’s just a really busy time at the museum, because we’ve got this big Matisse show opening in October. We’ve got a lawyer running the art museum now and he can do a lot of things. I don’t know if he can hang paintings on the wall though.”

The union formed in the autumn of 2020 and since then has been in ongoing contract negotiations with the museum’s administration. Currently, the PMA union has gone 23 months without a first contract. The museum itself has had a number of institutional controversies and missteps over the last few years including staff layoffs due to Covid-19 and a sexual harassment scandal. The next scheduled negotiation session for the museum and union is on 23 September.

Despite the picket line formed by the PMA union on Friday, the museum remained open to the public. “The museum remains open to the public and is committed to serving our community,” a museum spokesperson said. “When eligible staff voted to unionise, we immediately and unequivocally pledged to negotiate in good faith and we have done so. The museum has devoted significant time and energy to the negotiations, and we have made considerable progress, reaching agreement on more than 25 substantive issues. We are disappointed that the union has chosen to strike, but we remain focused on reaching a fair and appropriate contract with the union.”