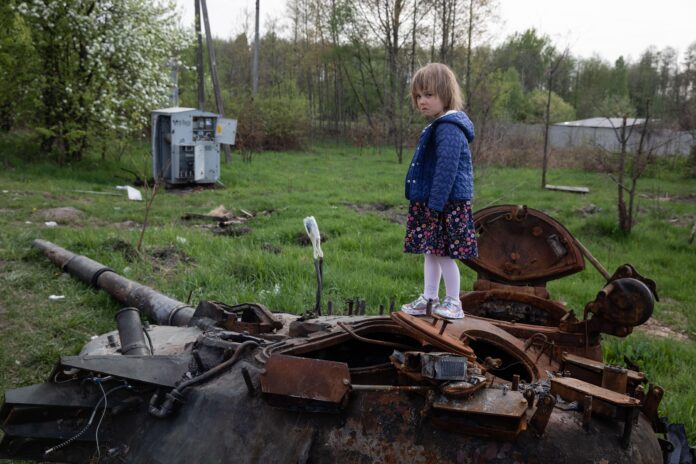 The PinchukArtCentre, one of the most significant art spaces in Kyiv, opened to visitors this week for the first time since the Russian invasion of Ukraine with a show of works created by Ukrainian artists documenting the human cost of the war.

The private museum, founded and owned by the steel billionaire Victor Pinchuk, was forced to close for 143 days while the Ukrainian people fought for their country after Russian forces invaded on 24 February.

Now, in a show of confidence by the Ukrainian people in the ongoing conflict against Russian forces, the art centre has reopened with a new show titled When Faith Moves Mountains.

The exhibition combines works on loan from the Museum of Contemporary Art (M HKA) in Antwerp which depict past conflicts alongside a range of contemporary Ukrainian photographs and paintings created during this war—some of which, the exhibitors say, show proof of possible Russian war crimes.

“The exhibition shows the most horrific moments of the war, shows the victims, and gives back a name and a face to those who suffered from those Russian war crimes,” says Björn Geldhof, the co-curator of the Russian War Crimes exhibition and artistic director of the PinchukArtCentre in an interview.

The photographs on show detail the sheer extent to which civilian life has been impacted by the war. The Office of the United Nations High Commissioner for Human Rights (OHCHR) has recorded 11,152 civilian casualties in the country as of 4 July, while the cost of direct damage to Ukraine’s infrastructure is more than $100bn, according to the country’s prime minister Denys Shmyhal.

Ukrainian artists have risked their life to visually transcribe the impact of the war on normal Ukrainian people; they include the images of Yevhen Maloletka, who captures the moment a missile hits a residential building, taken from the window of a hospital in Mariupol, or the smears of crimson blood that mobirdly decorate the hospital floor.

Also shown is Maxim Dondyuk, who documented an ageing woman walking amid the makeshift graves in the city of Chernihiv. The citizens of Chernihiv were victim to incessant Russian shelling in the early weeks of the war, and were forced to bury victims of the war in long ditches. A sign with the name of the deceased was placed near each grave for relatives to find when the city was safe to return to.

But amid scenes of horror there are symbols of hope and defiance too, like Mikhail Palinchak’s young girl stood atop the shell of a burnt out Russian tank, or the spring bloom of flowers on a tree which, at first sight, seems to have been burnt to destruction.

The exhibition also includes new paintings by artist Lesia Khomenko, who has depicted the volunteers “who formed a community around the army”.

“It exemplifies Ukraine’s unshakable unity, a common rally around the purpose of survival,” Khomenko says in a statement.

“The war is not just about Ukraine’s survival, it is about values. Ukraine has chosen European values of freedom time and time again.That’s what they’re dying for and fighting for,” Geldhof says.

The exhibition is the result of a collaboration between the PinchukArtCentre and M HKA, who, in partnership with the Flemish Government, have lent more than 40 works from international artists, many of which depict the impact of both World Wars on the people of Flanders.

M HKA were willing to lend the collection even though they could not insure them against damages as a result of the war.

Jan Jambon, Flemish minister-president says in a statement: “This is a risk we willingly take. In this way we can express our solidarity with Ukraine.”

PinchukArtCentre has coordinated with the with the Office of the President of Ukraine to become an active presence at art and political events the world over since the invasion, with exhibitions displayed at the Venice Biennale and Art Basel and at the political summit Davos.

“We, like all other Ukrainians, have an obligation to defend Ukraine in the best way that is available to us. And the best way that my team and I can do this is not with weapons, but with exhibitions,” Geldhof says.